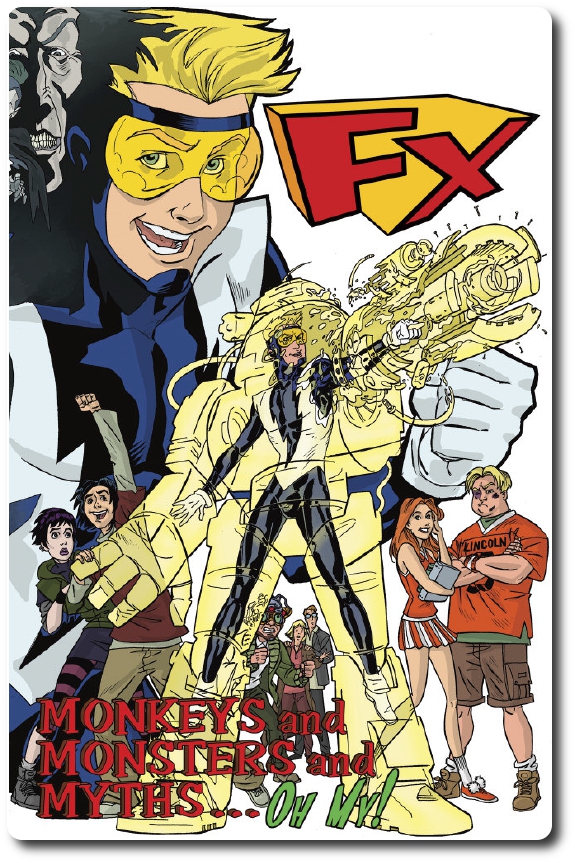 FX is a new comic from writer Wayne Osborne, with the good work of John Byrne, John Workman, and Greg Cordier providing the penciling, inking, lettering, and coloring. The story follows a young boy, Tom Talbot, who one day has the power to create whatever his imagination can dream up. Weapons, jets, robots, animals, anything and everything.

For example, Tom will point his fingers and say “Bang!”, and a giant laser blast will shoot out like a gun blast. Or, he’ll growl and the air about him will shift and form a giant lion. With this new ability to create illusions out of thin air that become real, Tom takes on the name FX (as in “special effects”) and begins a new chapter of his young life that is  full of adventure, danger, and never ending surprises. 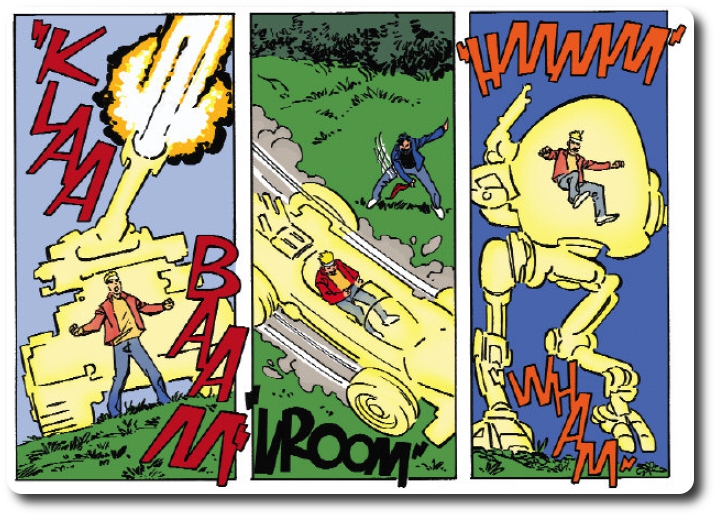 BEHOLD! The power of imagination!

Tom’s new found power grants him endless possibilities and fun. Suddenly, the bullies at school are not so tough, life’s problems are simple to solve, and our young hero walks up and down the school hallways and neighborhood streets with a new found sense of self worth and confidence. That is until,Tom’s new found abilities draw the attention of dark and sinister forces who will go out of their way to claim Tom’s power for their own.

The comic itself is illustrated very well and the story flows very quickly. Throughout the entire comic, there is a sense of wonderment and nativity that seems to portray Tom’s overall grasp of the situation around him as a young kid. For example, the villains are threatening, but not in a way that would lead the reader (or Tom) to believe his life is actually in real danger. What danger exists floats just at the surface and does not appear to have any real depth. I interpreted this as Tom’s lack of understanding of his own mortality.

Even when Tom's in trouble, he just doesn't take it that seriously!

Of course, the reader knows better, as they are clued in that what Tom is going up against is nothing to laugh at and should be avoided at all cost. But this is what makes the story all the more entertaining, as Tom just rolls with the situations that occur without any real sense of the threat to his or his friends’ lives. Tom’s self-assured nature, backed by his powers and child-like innocents, keeps the reader happily rooting for the hero and excited for the next page to turn!

My two oldest little geeks and I really enjoy reading comics together. There is just something about a comic book that seems to draw their attention and fascinate them. The illustrations are certainly part of the draw, but the stories the illustrations help convey to the reader are as important, if not more so. I have read comics to my boys that were beautifully illustrated, but they grew quickly uninterested when the story wasn’t that interesting. Likewise, when I have read comics with only a few illustrations or very simply drawn, they were glued to the pages because the story kept them enthralled.

FX has an excellent mix of gripping story and colorful illustrations that make the comic book an enjoyable experience for the ears and the eyes. Plus, the story is about a kid who has special powers! What child wouldn’t want to make a connection with that?

When I pitched the comic’s story  to my two oldest little geeks after dinner, they were very excited to give it a read. Here’s what they had to say.

“Can the hero fly and shoot lasers out of his eyes? Can he create swords and dragons, too?” ~ Liam (age 7)

Excitement abounds! So, with little geeks jumping up and down and shouting for joy, I did my best to calm them and read the comic.

FX delivers a fun and carefree adventure that has the shadow of danger always present but never to a point where a young reader will become worried. Is the comic exciting? Without a doubt,as the villains in the comic are over the top and would make even Batman pause to reflect on his possible success of going toe-to-toe with what Tom eagerly charges. It is Tom’s reckless abandon and “Who-hoo!” attitude that made reading FX a good deal of fun for my little geeks and I to read. You can’t help but smile and laugh as a young boy sends horrific monsters and villains in a tizzy, leaving them wondering just how they were outsmarted and beaten by a young boy.

I have always told my little geeks that the power of imagination is an incredible thing. It can take you to legendary places in your mind, help you solve problems by looking at situations creatively, and improve your quality of life, sense of appreciation, and wonderment. It is also a vital component for playing games, be they on the family gaming table or running around the backyard fighting imaginary dragons.

Is it any wonder why “imagination” is considered an essential Geek Skill?

FX plays on this idea that a person’s imagination is a powerful force. Except, in the comic, whatever is imagined manifests into a tangible object in the real world. This theme didn’t escape my little geeks and they knew very well what was going on. After reading the comic, they reenacted the story using their own powers of imagination. I was overjoyed to play with them and was quickly “out gunned”. It is a sad fact that, as we grow older, we loose the ability to imagine as freely as we once did as children.

My only dislike about the comic was the giant jumps in the story at times. There seemed to be parts missing that I, as an adult, would like to read. When I tried to put my finger on it, the only thing I could come up with was a lack of character depth. The story moves so fast, there really isn’t time to go into detail about the character’s themselves. For an adult who is looking for depth, this was irksome. For a little geek, however, it never even registered on their radar. Their little minds quickly absorbed the story and filled in the gaps as needed with their own background and internal dialog. They enjoyed the comic, and through them, I also enjoyed it. More than I would if I were to just read it by myself.

FX is a fun new comic with easy to like heroes and characters. The illustrations are colorful and compliment the action and drama of the story very well. Pacing is fast and furious and the reader will be left breathless as the comic plunges full speed ahead into adventure and danger. If you are looking for a new comic or a first time comic to share with your little geeks, give FX a try and use your own power of imagination for a great time.

This comic was given to Father Geek as a review copy. Father Geek was not paid, bribed, wined, dined, or threatened in vain hopes of influencing this review. Such is the statuesque and legendary integrity of Father Geek.