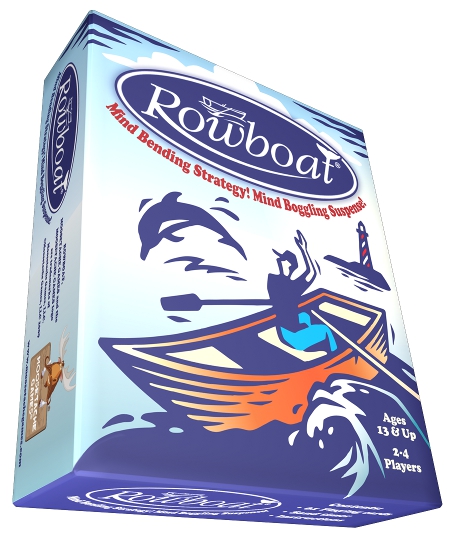 Rowboat is a heavily nautical themed tick-taking card game that is playable with 2 to 4 players. This game is challenging and will require the players to think hard about their moves if they are going to sink, swim, or float above the rest to victory (see what I did there?).

Rowboat is comprised of 61 cards of four suits: Maps, Oars, Shells, and Waves. A complete suit contains 13 cards. From weakest to lowest: Anchor, card number values 2 through 9, Dolphin, Mermaid, Seeker, and Whale. In addition, there are three special cards: Rowboat, Lighthouse, and Moon. Last, a 60 second sand timer is included for use with the special card, the Lighthouse. All the game components are of high quality and durable which will provide you, your friends, and your family with many hours of fun. What is not included, but will be needed to play the game, is a piece of paper and a pen or pencil to keep score.

The Dealer will always reveal the Tide at the beginning of the hand. Within that hand, the players might have the opportunity to try to take as few as 4 or up to a maximum of 12 tricks (for a 2 or 3 player game) or  to a maximum of 10 tricks (for a 4 player game). To determine the size of the Tide, the Dealer takes the deck of cards and reveals one card at a time until 1 of each suit is showing.

After the Tide has been revealed, the Dealer gives a number of cards equal to the Tide to each player.  For example, if the Tide is 5 cards, each player is dealt 5 cards.

The Exchange (4 players only)

If playing a 4 player game, each team of 2 can now pass one card to their partner. Partners cannot discuss their strategy at the table or discuss what cards to pass. The only exception is for the use of the special cards. Partners can discuss when they should be used at anytime in the game as appropriate.

Note: Bidding is an optional rule! If you are playing with younger little geeks or individuals who are not familiar with the bidding mechanic, consider not using it until everyone understands and is comfortable playing Rowboat. Bidding adds a great deal more complexity and depth to the game, making it difficult for card game novices.

For the first trick of the Tide, the player to the Dealer’s left plays their card first, followed by the next player to their left until everyone in the game has played one card. A player must always play to the Tide’s suit if they can. The only exceptions is playing the Rowboat or keeping a Knob for play later in the Tide.

The player who wins the trick collects the cards and deals the first card on the next trick. Play continues until all the tricks in the Tide have been taken.

If at any time there is no winner of the trick, play continues with the next trick as normal. Except, when the player wins the trick, they not only take the winning trick, but all tricks that were tied before it, too!

Playing with the bid changes how you count points and can greatly impact the player negatively if the bid was not done correctly. 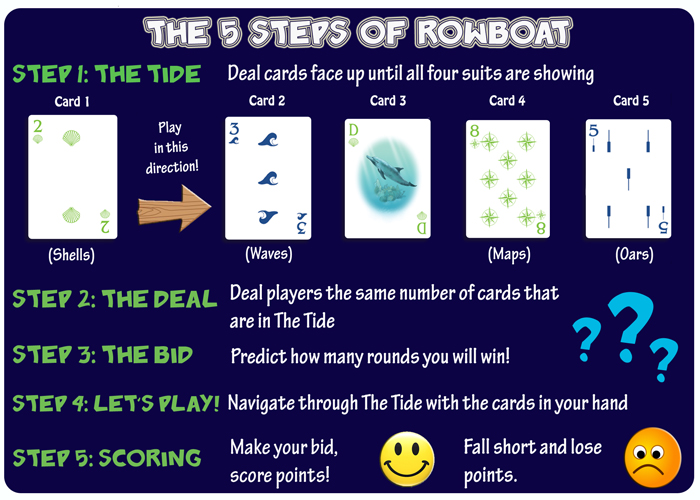 The winner of the game is the first player or team (if playing with 4 players) to 200 points. Teams add their points together.

In total, there are three special cards in the game. Once played, the cards are removed for the duration of the game. The special rules for each follow:

A video tutorial is also available to you if you are a visual learner.

Rowboat is a much more complicated game than my oldest little geek is used to. To date, he’s mastered Go Fish, Crazy Eights, Old Maid, his Chimpooki card game (created using Pentology), Slap Jack, and Duck Duck Bruce!, but none of these card games have a complex trick taking or bidding mechanic. Playing to a card’s suit, number, or color is familiar to my little geek, but these game mechanics have only been played at the most basic of levels. Additionally, Rowboat’s bidding rule is simply too complex for my little geek to grasp at this time in his early Gamer Geek career. I give him one more years, tops, before he can really tackle bidding in a way that would allow him to be competitive.

After giving it much thought, I decided to go for it and teach my little geek the game, even though the recommended age is 13+. However, I have said many times before that the age range on the game box is nothing more than a general suggestion on what age groups might have the necessary geek skills to play the game well. Emphasis on the might, as I know 40 year olds who still cannot grasp Settlers of Catan which is a game designed for ages 10 and up. If a parent is willing to work through the rules of the game, is patient, and encouraging, you can teach your little geek anything.

Turns out that teaching the basics of the game wasn’t that big of a deal. My little geek quickly grasped the significance of the Tide and how the cards should be played to win tricks. The card conditions for Knobs and Off-Colored Knobs was a problem for my little geek initially until I created a visual aid to help him remember. We also played several hands open so he could see how I was playing my cards, talking through each decision made. Once we completed several tricks, and he felt he was ready, we took the cards, shuffled them and got ready to play the game. Before doing so, I asked my little geek his thoughts on Rowboat. His response:

“This looks like a hard game, but I understand how to win cards. I don’t think I’m going to win, but you are not going to take all the tricks, Dad!” ~ Liam (age 7)

What spunk! You gotta love it when your little geek looks a challenge right in the eye and says, “bring it!”

Rowboat is a surprisingly complex card game that keeps me coming back for more. Unlike other trick taking games, you already know what you are going to play to in the Tide which makes it easier to bid. However, the other players also know about the Tide, which makes bidding something of a game of “Cat and Mouse”…or is it “Chicken”? Either way, the level of competition to out-think and out maneuver your opponent is incredibly challenging and fun! I have tried Rowboat with and without the bid mechanic and HIGHLY suggest that any self respecting Gamer Geek play with the bid right out of the box. You will be rewarded with a quick card game that will challenge your critical and logical thinking and any semblance of strategy or tactics you might have learned with other card games.

A little geek’s game, however, this is not. I think Rowboat is too abstract for a young mind to grasp. The game itself it really played in the mind as you attempt to out-think your opponent and then play the hand out, making subtle corrections as you go. This depth was completely lost on my little geek and he only thought about his next trick, matching cards as he went, instead of thinking more long term. This is not a knock on the game whatsoever, but I do agree with the recommended age on the box. I think my oldest little geek will be able to play the game better next year or the year after, but right now, there is too much going on in the game for him to really enjoy it. As such, Rowboat was rejected by my little geek for games more his speed and geek skill level. 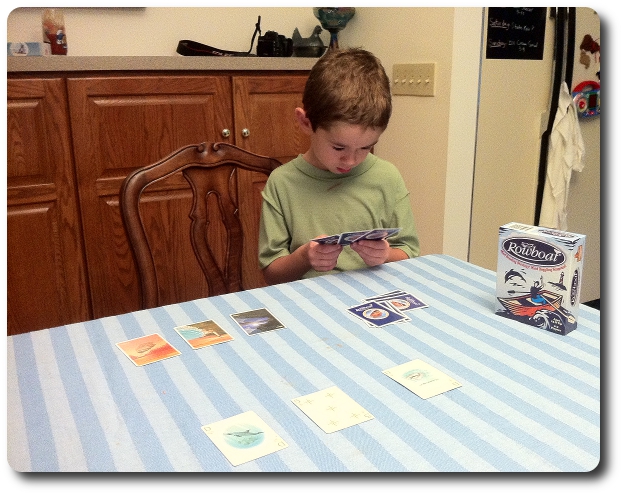 My little geek understood the basics, but the game was just a little too complex for him

For the Parent and Gamer Geeks, though, Rowboat is going to be a treat! Not in a long while has a card game got me thinking so hard or has felt so rewarding when you pull off your bid. The special cards add an interesting twist that can really make a difference in the game if played correctly and at the right time. I’ve played many, many different trick taking games in my day, but there is just something about Rowboat that works very well. You will also find that Rowboat will be a welcomed game for those family members who enjoy the more complex card games like Cribbage and Bridge, but do not consider themselves Gamer Geeks.

The only part of the game I do not like is the limit to 3 sets of special cards in the box. Yes, the 4 player version of the game shares a set between two players, but a think providing 4 sets would make for a very interesting 4 player, non-team game. A simple enough correction, of course. Just create three special cards for the fourth person, which I have done. A 4 player, non-team game is terribly cutthroat and lots of fun, but of course, much longer. It is the increased game length that might have been the deciding factor on making a 4 player game a team experience.

Rowboat was also very popular at Gen Con 2011, complete with a 3 day tournament, and was a runner up for the 2011 Family Card game award. See? I’m not the only one who likes it. 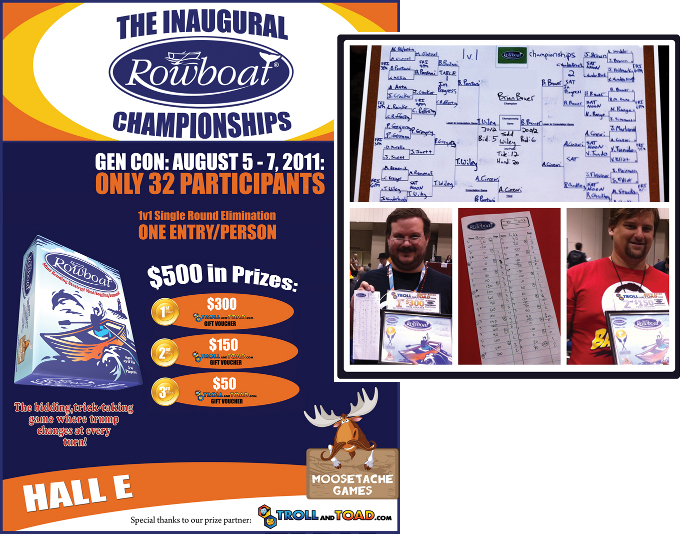 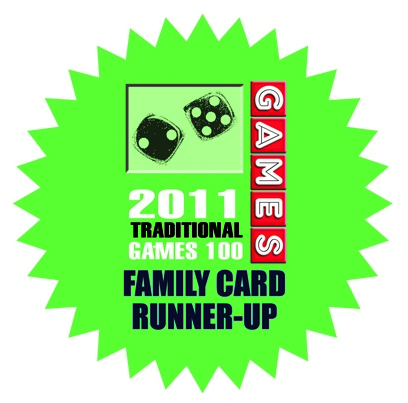 Like the game? Get yourself a copy and save some cash! Use the following special promotional code, “HOLIDAY”, courtesy of Moosetache Games. 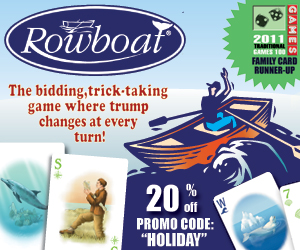