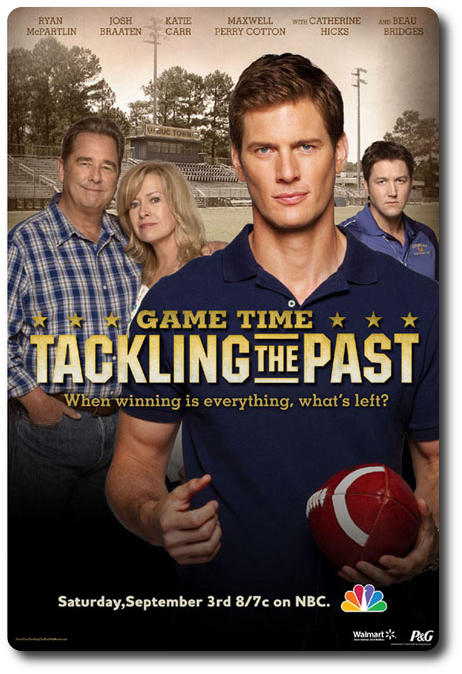 This summer I was sent to visit the set,  interview the cast, and watch the filming of a television family movie by Walmart and P&G. You can read all about it in my earlier post, “Father Geek Goes Hollywood“.

The entire experience was an incredible one and a real eyeopener. Never before had I seen such controlled chaos. People everywhere, equipment leaning up against and taking up any available space, blocked traffic, and constant motion. And yet, it all seemed to work. Not once did I see anything to suggest that even the smallest thing was out of control or out of place. I credit this to the many men and woman I saw working to keep the movie machine rolling without so much as a hiccup. Compared to all that goes into making a movie, very little of it is actually in front of the camera lens.

At the time of the the visit to the set, the movie had a working title only and we were told the official movie title would be decided at a later date when it was closer to being released. When it grew closer to the release date, the official title was announced: “Game Time: Tackling the Past”.

From the official web site…

Pro football star Jake Walker is living the dream… or so he thinks. The veteran tight end is a fan favorite and on pace to set the all-time receiving yards record that will guarantee him a spot in the Hall of Fame. While working out at training camp, Jake receives an unexpected call from his brother Dean – their father Frank has suffered a major heart attack. Jake immediately leaves practice and returns to Riverton, North Carolina, the small hometown he’s avoided for nearly 15 years. Memories of glory and regret flood his mind as he returns to the family and friends he abandoned in pursuit of his career. Jake dutifully visits with Frank and Dean, but hurt and misunderstanding from the past begins to resurface, leaving him counting the days until he can return to his team. [read more]

For the record, I’m not a fan of the final and official title. The working title, “Home and Away”, just sounded better. Then again, my total life experience with the movie industry could be summed up in two words on the back of a matchbook: “not much”. Clearly, some thought was put into the final product of the movie and the title. It’s just not my cup of tea and we’ll leave it at that, move on, and agree to never discuss it again.

I was lucky enough to receive an invite to watch a special preview of the film before it is released to the world on Saturday, September 3 on NBC at 8pm ET/7pm CT. Finally, I was going to be able to watch the movie I saw being made! I gathered my family, made some popcorn, and watched eagerly the final results.

While football is prominent in the movie and narrative, it is not the only, or the most important, game being played. The real game is the one we play with ourselves everyday when we make choices. Do we go left or right? Pay off our car with some extra cash or take the family on a vacation? Do we chase fame and fortune or happiness and substance? What is important to us and why? Everything we do is a result of a choice, the universal rule of cause and effect, the proverbial fork in the road where a decision is made and we are whisked away on the wings of  luck or trampled by the feet of misfortune.

The choices we make need not be difficult ones or have serious legal or moral repercussions. Choosing a side salad or fries, for example, will hardly land you jail. And yet, it sometimes is the simplest of choices that often times lead us down a slippery slope. This slope is made all the more slippery with our own ambitions. By the time we reach the end of that hill, looking back might lead to painful attacks of regret. Why? Reflecting on all that we have accomplished might sometimes reveals that the choices we made left those we love and respect batter, bruised, and left behind.

This is the lesson ultimately learned by the main character of the movie and it is a rather poignant lesson for both parents and children alike. I have often remarked that I enjoy a fast paced life at the office, the chase for success, and the energy that comes with deadlines and working with large groups of people all over the world. I thrive in this type of culture and look forward to my time at the office. My wife and I have made choices in our lives to focus on my career so I could follow my ambitions. The results of this is a successful and fulfilling career, but at a cost. I spend long hours at the office and am away from my family for the majority of the day. What time I have left after work is spent on the floor playing with my children. I work up to 12 hours per day and only get to spend about 3 hours with my kids. If you do the easy math, you can clearly see my kids are getting the short end of the stick.

While watching the movie, I was reminded of this again and again. I sympathized with all the characters in the movie, but none as strongly as I did the main character. His life had become one of self-doubt and regret. When the movie was over, I thought about this deeply and came to the conclusion that I did regret not spending more time with my family. In the long term, what did it matter if my career was a successful one? None, probably, but the “here and now” is a powerful reminder of our responsibilities. Specifically, my responsibility to provide for my family, to ensure there is food on the table, clothes to be worn, a house to live in, and opportunities available to my children and wife that will allow them to grow and experience life. And so, it is a balancing act of “tit vs tat”, “giving vs getting”, and always wondering if you did enough or fell short of the mark.

The movie explores these feelings and does an excellent job of showing us how families and communities are connected, how they grow together, and how they also separate from each other. Out of all the Family Movies released by Walmart and P&G, this one really spoke to me.

But the movie wasn’t t all deep existential thoughts and moody discussions. This movie was also entertaining and packed with excellent actors who moved the story along making it an enjoyable experience for the entire family. Sports fans will love the football and parents will love the positive messages. I greatly enjoyed the film and would recommend it to anyone. Here is a trailer for the upcoming movie to get your head in the game.

The premiere of “Game Time: Tackling the Past” is on Saturday, September 3 on NBC at 8pm ET/7pm CT. Learn more by visiting the official web page or join others on Facebook to discuss the movie.

Reserve the date, gather the family, pop some corn, and enjoy a family-friendly television movie about life, family, and football.

Father Geek wrote this review while participating in a campaign by Dad Central Consulting on behalf of P&G and received a promotional item to thank me for taking the time to participate.

3 Responses to Game Time: Tacking the Past Family Movie Review