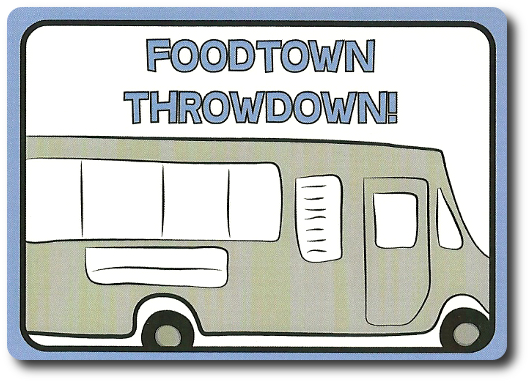 Restaurants are nice, but the real cuisine comes from the side-window of a food truck. These entrepreneurs-on-wheels serve the best tacos, salads, soups, burgers, and kabobs in town. Best of all, they push the limits, fussing together new tastes to create extraordinary dishes that no restaurant chef would dare. The only problem is competition. Everyone with a vehicle and a grill thinks that they can be a food truck hero. Well, you aim to prove them wrong. THERE CAN BE ONLY ONE!

Foodtown Throwdown, designed by Ben Pierro and to be published by Argyle Games, is comprised of 20 Recipe cards and 85 Play cards. As this is a review of a prepublished game, I will not comment on the game component quality. The proposed artwork is clean and does a good job of visually communicating what each card does and represents.

Gassing Up the Truck

To set up the game, first separate the Recipe cards from the Play cards to form 2 decks. Shuffle each deck separately.

Second, deal 4 Play cards to each player, face-down. Players should pick up their cards, but keep them hidden until played.

Third, place both decks in the middle of the game playing area. These are the draw decks for the duration of the game.

Fourth, drawn and reveal the first 2 Recipe cards (or 3 Recipe cards if playing with only 2 players), placing them face-up in a row next to the Recipe draw deck. These are the current active recipes that all players are competing for.

That’s it for game set up. Determine who the first player should be and begin.

Foodtown Throwdown is played in turns with no specific number of turns per game. On a player’s turn, they will complete a small number of sequential steps which are summarized here.

The player can now take as many actions as they want, but only if they have the right cards. The actions are as follows:

“Action” Play cards allow the player to mess with their opponents, sabotaging their grill and being a general nuisance. All is far in food and war, apparently. Once the “Action” Play card is revealed, it’s immediately resolved and then discarded. 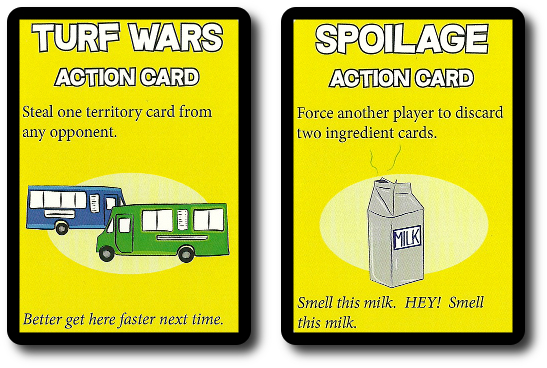 Ingredients comes in 6 main categories. These are Beans, Breads, Cheeses, Meats, Potatoes, and Veggies. These categories are always bold and in white font on the “Ingredient” Play card. The text above it describes what type of bread, bean, cheese, meat, potato, or vegetable it is. However, a player need only match the category listed on the “Ingredient” Play card to the Recipe card to claim it. The rest is just fun information to help the player imagine the food they are preparing.

These cards provide points and are played in front of the player. Thematically speaking, they represent the social media ad campaigns the player is running on the side and securing hot-spots where the foodies gather. 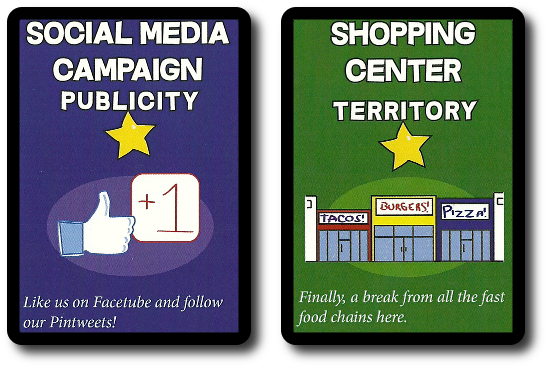 If the player is unable to play a card or wants to end their turn, they can announce they are passing.

A player can never have anymore than 8 Play cards in their hand. The player must discard down to 8 before their turn is over.

This completes the player’s turn. The next player in turn order sequence now goes starting with step 1 noted above.

The game continues until a player has 10 or more “star” points at the end of their turn. Star points are earned from completing Recipe cards, “Publicity” Play cards, and “Territory” Play cards.

To learn more about Foodtown Throwdown, visit the game publisher’s website or visit the Kickstarter campaign

The Child Geeks liked the idea of mixing and matching different recipes to come up with strangely titled delicacies. One Child Geek said, “I feel like I’m cooking!” None of the Child Geeks had any issues learning and playing the game. According to another Child Geek, “I think this is a good game, but it makes me hungry!” The only aspect of the game that was not overly enjoyed were the “Action” Play cards that messed with other players. The Child Geeks would have preferred to just focus on making food as fast as possible. When all the games were over and the kitchen closed, the Child Geeks all voted to approve Foodtown Throwdown, finding it to be a delicious game to chew on. 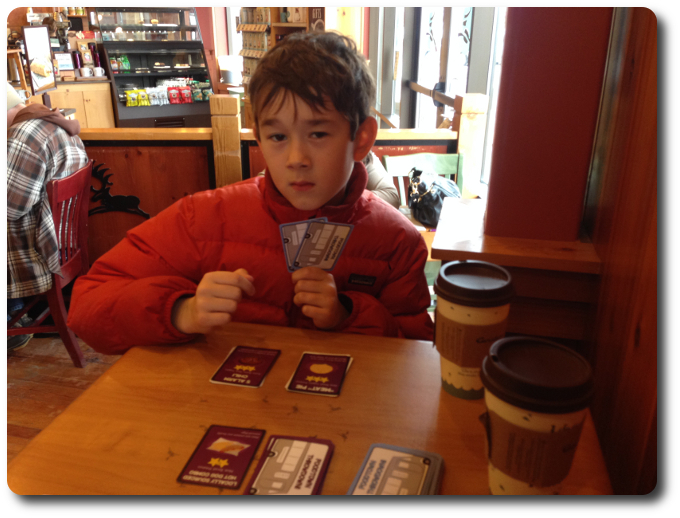 The Parent Geeks who enjoy playing very casual games, especially with their children, enjoyed Foodtown Throwdown. The best part of the game, according to one Parent Geek, is “the creative name of the food you make when you score it.” Another Parent Geek said, “This is an easy game to play and an easy game to have fun with. I can see myself playing this with my kids a great deal.” But the game was not well-loved by all. A number of Parent Geeks found Foodtown Throwdown to be too simple to play with their peers and their Child Geeks had already moved on to more complicated games. As one Parent Geek put it, “I think this is a great game to introduce to individuals who don’t know much about games. Once you do, I don’t think you’ll play this particular game for very long.” When the votes were in, the Parent Geeks were split. The more casual players and non-gamers enjoyed Foodtown Throwndown, while the more experienced Parent Geeks found the game to be a bit dry.

The Gamer Geeks did not enjoy this game whatsoever. One Gamer Geek went so far as to call it “stupid” and “unimaginative”, but a few Gamer Geeks were not as harsh. According to one Gamer Geek, “I think this would be a great game to bring to a pub or play at a food fair during the summer. It has a fun theme, but yeah, not much game play.” The gaming elitists found the game’s theme to be pasted on, the actions to be predictable, and the level of creativity to be subpar. They did not endorse the game, as a result.

Foodtown Throwdown is a very casual card game. So casual that it’s obvious most of the time what a player should do on their turn. The only surprises come from “Action” Play cards that have a tendency to make a fairly quick game last longer than it should. This was not lost on many of our players, but nor was it overly disliked.

I live in the Twin Cities area of Minnesota where food trucks are abundant. You can find them clustered at street fairs, small breweries, parks, and in front of offices. Everyone has their favorites and swears by them. “Regulars” at a food truck often know the entire food truck crew by first name, which is pretty cool. Even cooler is having a sandwich named after you or a special way of preparing a meal as a “thank you” for your patronage. I have a friend who has been a regular at one food truck for so long that he has both a meal and a topping named after him. Talk about a “lifetime achievement”!

To say I’m a fan of food trucks is putting it mildly. I like the entire concept and everything related to the industry. Well, pretty much everything. This game’s theme didn’t come out as strongly as I would have liked. I never felt like I was cooking anything or attempting to win over the community of foodies. There was no pressure behind the grill or heat in the kitchen, so to speak. A shame since food trucks are all the rage at the moment and a game that featured them would certainly be of interest to a growing crowd of food truck enthusiasts.

That being said, the game plays well enough as it is. The large hand size and unlimited card plays per turn allows a player to keep most of the Recipe cards they want without the need to worry about what to keep. There are also enough “Ingredient” Play cards to allow players to collect just about any active Recipe card, but not without a bit of effort. None of our games left a player holding ingredients they couldn’t use or a Recipe that couldn’t eventually make. Mostly because the game’s never lasted long enough.

I found the game to be simply OK. I didn’t thrill me and I wouldn’t bother playing it unless someone asked me to play it with them. This is just not my kind of game. It’s a game my little geeks are enjoying and they like to take out the cards and make their own strange recipes. To date, they haven’t crafted anything I wouldn’t eat, but the game itself leaves me starved for more.