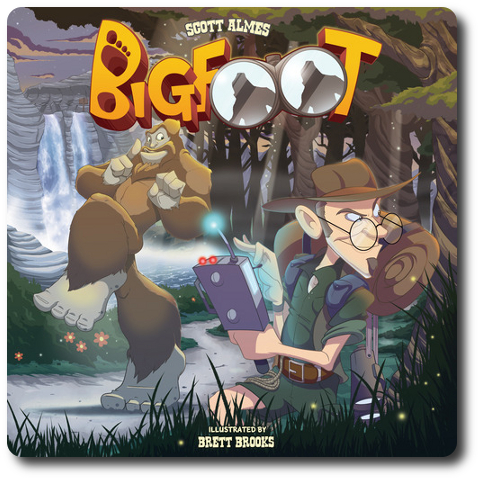 Stories are told of a large man-like creature that roams the woods. He’s said to be 10 to 12 feet tall and is more ape than man. Cryptozoologists have searched the area for years but have never been able to provide definitive proof of this creature’s existence. That’s about to change – maybe – as one very determined scientist enters the woods with is gear. In the shadows, Bigfoot rolls his eyes and mutters, “Oh, not again.”

Bigfoot, designed by Scott Almes and published by Game Salute, is comprised of 1 Bigfoot card, 1 Cryptozoologist card, 10 Lair cards, 36 Path cards, 3 Reference cards, 1 Round Tracker card, 1 Player Aid card, and 25 Footprint tokens. The cards are as durable as your standard playing card and the Footprint tokens are small, but thick pieces of cardboard. The illustrations by Brett Brooks (II) are humors and very well done.

Note: The Cryptozoologist player might want to use a pen or pencil and some paper to help them keep track of the information they learn during the game.

Second, give the Bigfoot player 24 of the Footprint tokens, setting 1 Footprint token aside for round tracking. Give the Cryptozoologist player the “Lair Tracking” Reference card.

Third, set the Round Tracking card to one side of the game playing area and place the Footprint token on the “1” position. This token will be used to track the rounds of the game.

Fourth, shuffle the 10 Lair cards and deal 5 to the Bigfoot player, face-down. The Bigfoot player can look at these cards, but should keep them hidden from the Cryptozoologist player until played. Place the remaining 5 Lair cards face-down next to the Round Tracker card for use later in the game. 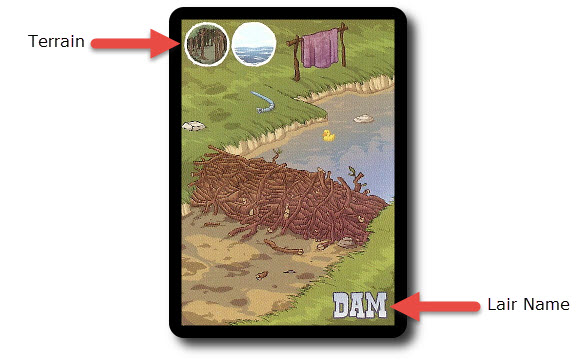 Fifth, shuffle the Path cards and place them face-down next to the Cryptozoologist player. This is the Path draw deck for the duration of the game. Leave room for a discard pile next to it.

That’s it for game set up, time to play a little hide and seek.

Each player is given a card the represents the character they will be portraying in the game. Specifically, Bigfoot or the Cryptozoologist. These cards not only serve to remind the player what their goal is, but they also keep track of the character’s current state.

The only way to flip a card back is through specific Action Path cards. 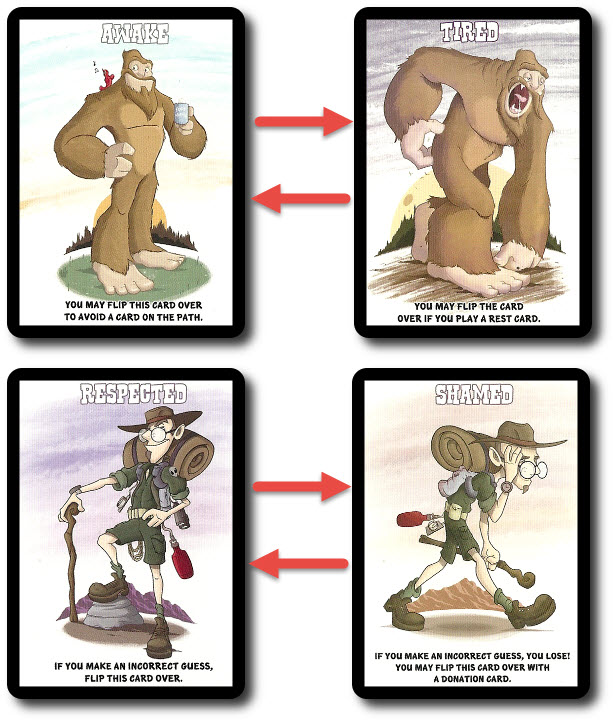 Bigfoot is played in 6 rounds. Each round consists of 5 steps. A typical round is summarized here.

Action Path cards are divided into 2 sides on the card’s face. One side belongs to the Cryptozoologist player and the other side belongs to the Bigfoot player. These Path cards provide the player (based on their current role) an action that can be used during the game by playing and discarding the card. Action cards can be used right away when they are collected or at anytime during the game when it makes sense to do so.

The Cryptozoologist will now create two card rows using the Path cards. Each row is referred to as a “path”. Cards are played to paths face-up. A path must consist of at least 1 Path card and all 6 of the Path cards must be used. It’s up to the Cryptozoologist to determine how best to create the paths in hopes of learning as much as possible about Bigfoot’s whereabouts.

Each Sensor Path card is now resolved as follows in whatever order the player’s like: 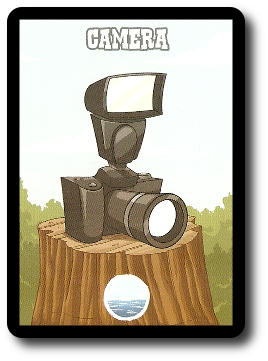 The Bigfoot player repeats the same process with their Lair cards, but counts 2 Terrain symbols this time. Essentially, this is an improved “Camera”. 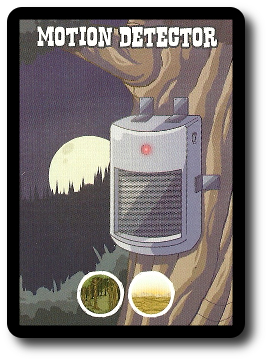 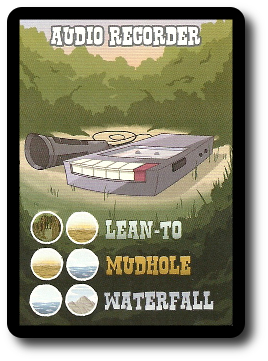 Now the Cryptozoologist needs to do some critical and logical thinking. Based on what information they have learned about Bigfoot’s possible lairs, they can now attempt to guess one of the Lair cards Bigfoot calls “Home”. The Lair cards and their Terrain symbols are listed on the “Lair Tracking” Reference card. Here’s how it works… 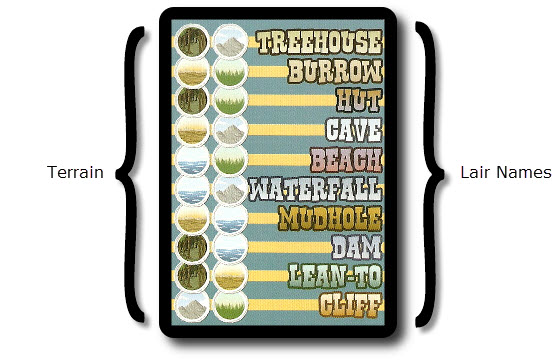 Note: Guessing is optional. The Cryptozoologist player is never required to guess. If no guess is made, the round immediately ends.

After the Cryptozoologist player thinks it through, they ask the Bigfoot player if they are holding a specific Lair card. For example, “Do you have the “Hut” Lair card?”

Step 5: A Second Guess and Ending the Round

If the Cryptozoologist player wants to, they can discard any Action Path card they might have and take a second guess. The second guess is handled just like the first.

The round now ends. All Footprint tokens are removed and returned to the Bigfoot player, “Sensor” Path cards are discarded, and the Footprint token is moved to the next round on the Round Tracker card.

The game can end several ways.

If you like your games to be a bit more difficult or a bit easier, these game variants might be to your liking.

This game variant increases the difficulty for the Cryptozoologist by reducing the total number of Path cards in play during each round to 5.

This game variant gives the Cryptozoologist 6 Path cards to use, but they are placed face-down when the paths are created. The Bigfoot player must select which path they will take without knowing what each path contains, but nor does the Cryptozoologist! Talk about walking lost in the woods! Reveal the paths when selected and play as normal.

To learn more about Bigfoot, visit the game’s web page. 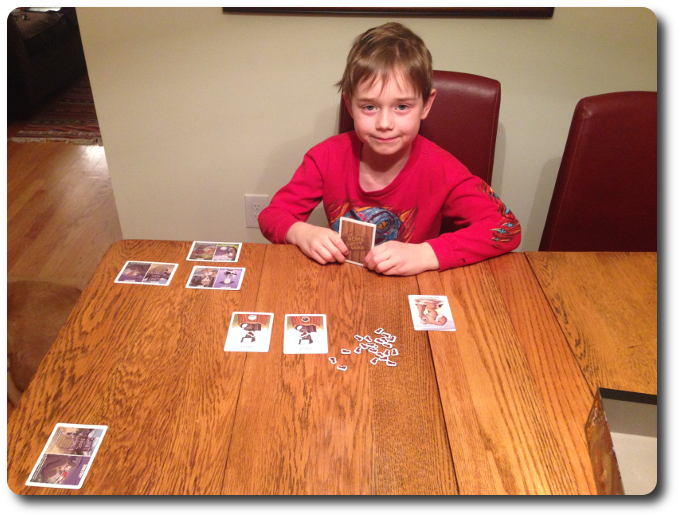 The Parent Geeks felt the same way about Bigfoot at first until they started to play the Action Path cards like ninjas. According to one Parent Geek, “Ah, I see! So as Bigfoot I can really slow down and confuse the Cryptozoologist! I like that!” Another Parent Geek said, “This game can be pretty easy as long as you are chasing a dumb Bigfoot. Unfortunately, I’m not.” The Parent Geeks quickly learned that Bigfoot’s biggest weapon was delay. If they could reduce the amount of information the Cryptozoologist could gather each round, they could make it more difficult to know what Lair cards to select. Since the Cryptozoologist is never forced to guess, they can pass to the next round, but doing so reduces the number of times they can guess. The longer Bigfoot can keep the Cryptozoologist in the dark, the better the odds that Bigfoot will win. All the Parent Geeks liked this and found Bigfoot to be a fun game with their peers and with their kids. They fully approved the game.

The Gamer Geeks found Bigfoot to be so-so at best. According to one Gamer Geek, “It’s a neat idea, but I feel like the game puts more focus on the Cryptozoologist than the Bigfoot player. This made me feel like I wasn’t doing much other than just making the game harder for my opponent.” Another Gamer Geek said, “I don’t see how you can’t win in this game as the Cryptozoologist. If you make paths that always give you information regardless of what smoke bombs Bigfoot throws at you, you can start to figure out the right cards pretty quickly.” The game was not as easily won as the Gamer Geek suggested, however. Bigfoot beat the pants off the Cryptozoologist many times. The Gamer Geeks liked this, but never enough where they thought it was a good enough game for all them. As one Gamer Geek put it, “This is a great game of deduction for casual play, but not for a gamer like me. Still, I’d play it again.”.

I’m with the Child Geeks and the Gamer Geeks on this one. The game feels a bit one-sided at times and I never felt satisfied when I played as Bigfoot. Sure, as Bigfoot you can do a lot of hamstringing, but you cannot bluff and you most certainly cannot lie. That means the best you can ever do is slow things down. In the end, Bigfoot felt like a solitaire game that required a second player in order to make it work.

And yet, I like playing it with my little geeks a great deal. Bigfoot is a great introduction to Deduction games. These types of games can be really frustrating to the Child Geeks because of the complex and subtle metagame that is all but invisible underneath the game’s surface. Bigfoot changes the metagame to card actions, making it easy to see what’s going on but not always why. This, in turn, makes it a lot easier to teach when you can point out visible, but not always obvious, game strategies. This is especially helpful for the Child Geeks who can play as the Cryptozoologist and their partner can play as the Bigfoot, helping them along and talking them through their choices. It also serves as a good filler for 2-players when you have some time to kill but not a lot of space to play a game. If Bigfoot sounds like an interesting game to you, do search it out and give it a try.