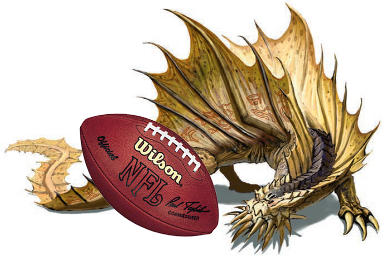 The NFL season kicks off this week and millions of rabid fans are not only excited to watch their favorite team start the journey towards the coveted Vince Lombardi trophy; but many of them will be keeping a watchful eye on their fantasy football rosters in the annual pursuit of a fantasy football league championship.

Each year, millions of people play fantasy football. These obsessive players spend hours pouring over stats, projections, and injury reports in hopes to put together the best possible combination of football players that can give them the highest number of fantasy points each week. These sports geeks will tweak their rosters and make adjustments based on injuries, bye weeks, and their next opponent. During the season, these fantasy team owners get together, watch games, talk smack, and burn up their league web forums and emails with gloats and excuses for what might have been. For many, fantasy football is an escape, a hobby, a social event; but in the end they all do it just for the fun of it.

In a way, fantasy sports players are no different than gamers. Both groups have an obsession and passion for what they do, and even the game of fantasy sports mimics game genres common to many table top games, specifically role playing games and miniature war games. Let me show you how.

Role Playing Games (RPGs) are all about creating a character you care about and building that character over the course of many play sessions. In the same way, fantasy sport team owners create teams for football, baseball, basketball, hockey and other sports that they will build over a season and sometimes multiple years. Owners give their team a name and a logo that will be identified with that owner over the course of the season. Many owners use the same name across multiple leagues helping to develop their persona that is used over the course of many years. For example, I have a fantasy baseball team that has used the name Crotch Scratchers since the mid-90’s. Over the course of those many years, I’ve won six championships and now the Crotch Scratchers have built a solid competitive reputation.

Every RPG has a game master that is responsible for running the game, keeping the players on track, and making sure they provide an experience that keep players coming back to their games. Likewise, every fantasy sports league has a commissioner who is responsible for setting up the league rules, scheduling drafts, making sure the game runs smoothly during the season, and keeping owners happy so they will want to return the next season. In a RPG, if the game master is inflexible, stubborn or a control freak, there is a good chance people might not be interested in sitting in on another game with them. Likewise, if a commissioner is overly controlling, inflexible, does not take feedback from the owners, and runs a league with an iron fist, then owners will gladly look for another league to participate in.

In the end, the real draw of RPGs for gamers is the social aspect. Friends getting together, sitting around the table for hours with their books and character sheets, laughing, eating junk food and just enjoying each others company. For fantasy sports players, the biggest day of the season is draft day. All the owners get together in one place, sit around a table for hours with their laptops, magazine and stat pages, laughing at other people’s picks, and eating junk food. Owners really enjoy this special gathering at the beginning of the season where all the league members get together in one place with the common goal of building a team to dominate the league.

When it comes to actual game play, fantasy sports is a lot like miniature war games. In miniature games, such as Warmachine and Warhammer 40k, a player has many options to choose from when building their army. They will spend hours reading faction books, codexes, gaming sites, and forums in order to find the units that makes the most sense in the army they are trying build. Likewise, fantasy sports players spend hours reading fantasy magazines, sports sites, and forums in order to find the best players to make their team the most competitive it can be. In miniature games, there is always varied opinions regarding which factions and units are the best. Likewise, all the sports “experts” have varying opinions on which players will perform the best. But in both cases, the gamer and team owner must make a reasonable decision based on all the data they have collected.

In miniature games, as you play games with other people, you start to tweak your armies. You remove units in favor of others or change units based on your opponent. In fantasy sports, as games are played and the season progresses, owners drop, add, or trade players in order to make the team even more competitive. In both situations, it’s an ongoing process of constantly reevaluating and adjusting the lineup in order to get the best results.

There is one major difference between miniature war games and fantasy sports. When you play a miniatures game, your opponent directly affects how you play and the decisions you make. In head-to-head fantasy sports leagues, your team doesn’t physically play against the other team nor do the players on a the fantasy team really affect each other. It’s strictly comes down to the cumulative stats that are collected during the games. So with fantasy sports, while the actual games are played, owners just sit back and watch to see if they made the right decisions. While for miniature games, the most important decisions are actually made while playing the game.

A subtle but huge difference.

Personally, I consider myself a gaming geek and a sports geek. I’m obsessive about all things gaming and have been since a very young age. Likewise, I’ve played and watched sports all my life and am very passionate about my favorite teams. In both, fantasy sports and tabletop gaming, it’s all about the fun and the social aspect that I love. That’s what keeps bringing me back to the game table and draft room. I have many gaming friends that care nothing about fantasy sport leagues and I have many sports friends that care nothing about RPGs or miniatures.

Just don’t realize how alike they are. Geeks are geeks.

2 Responses to Fantasy Sports: The Geek Game for Sports Geeks