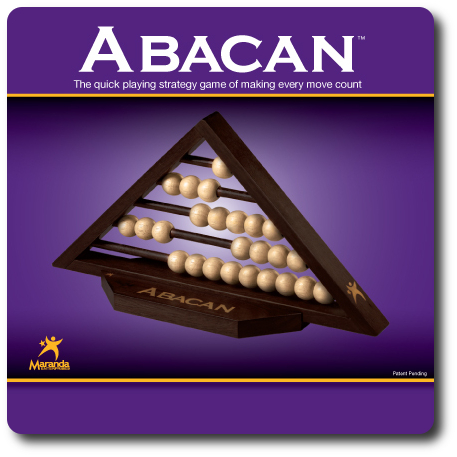 In this abstract game, every move counts and counts and counts again. Keep track of the beads and determine your odds of success as you quickly shift one to three beads from one side to another. Be smart, be careful, and be sure that the beads you move will not leave you well outside the winner’s circle when the game ends.

Abacan, by Maranda Enterprises, is comprised of one isosceles triangle-shaped wooden abacus that contains 5 bars with 25 total wooden beads and 1 wooden base that the triangle fits into allowing the game to be played standing upright. The entire game is made of wood (if that is not yet obvious) and is very durable. 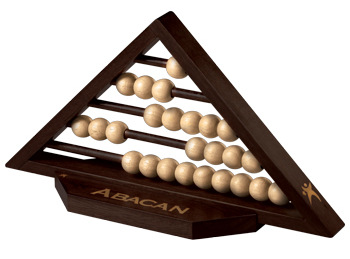 The game in all of its minimalistic wooden glory

Decide on a first player and begin.

On a player’s turn, they will move 1, 2, or 3 beads (player’s choice) on any single bar to the opposite side from which all the beads were originally placed when the game was set up. Once they have completed their move, the next player goes and the game continues, with each player taking a turn, until the endgame condition is met.

The game continues until a player is forced to move the last bead. The player who does so has lost the game and is highly encouraged to immediately declare a rematch.

To learn more about Abacan, see the game’s web page.

A very straightforward, easy to play, and fast to complete strategy game should be well received by both the Parent and Child Geeks, but I have my doubts about the Gamer Geeks. Although the Gamer Geek elitists might very much enjoy the level of thought they have to put into the game to be competitive against a peer, they might find the overall game too short to warrant anything other a positive aside. Regardless of who does or does not like it, one things is perfectly clear after reading the rules: no one will have time to get bored. The game is fast. Super fast, in fact. The rules suggest a single game could take up to  5 minutes (at most), but I doubt any game will last longer than 2 minutes. The level of thought needed to play the game is focused and a player need never get lost in the abstractness of the game, suffering from analysis paralysis as a result.

Teaching the game takes about a single breath of effort, although you might be doing a new player a disservice if you don’t provide at least a few examples of play. To everyone I tought the game to, they understood the objective and game play before I was done with my instructions. After I taught my little geeks the game, I asked them their thoughts on it so far based on what thy had been told.

The little geeks are ready to go. Let’s put them on opposite sides of the table and see if the game play and time spent adds up to fun or if they should quickly subtract this game from their memory.

My 5-year-old kept calling the game “A Bacon”, which we all laughed at and started using ourselves. In our household, we now say to one another, “Hey, want to play a game of  bacon?”, and everyone knows what you mean. Silliness aside, Abacan much pleased the little geeks. They both did very well and were evenly matched for the most part. My oldest thought a bit more about his moves and was obviously counting beads before he selected which to shift on his turn. My 5-year-old told me he “moved the beads that looked right”. I cannot argue against this logic or his methods as he won games using this strategy both against his brother and me, much to my great delight.

Parent Geeks enjoyed Abacan and found it to be a fun 2-player puzzle game that played fast and challenged the players without feeling like a burden. One Parent Geek suggested this would be an excellent game to put in schools and to place in waiting rooms at doctor and dentist offices. Another Parent Geek suggested that this was a game you could place in your house, say it is artwork, and then take it down and play a game or two. Regardless of where the Parent Geeks did or did not want to play it, they all agreed the best place to put it was between them and their little geeks. Playing the game with their children brought both the Child Geek and the Parent Geek much entertainment.

Gamer Geeks actually surprised me and gave the game more than just a fleeting glance. They started out just moving beads, at random it would seem, but would quickly hunker down and “get serious” about their bead selection as the game progressed. The game, in their own words, starts out like a leisurely stroll in the woods and leads you up a mountain. The game quickly ramps up and, as the number of beads decreases, the Gamer Geeks became more and more focused. Their final thoughts on the game were based on the game’s result. If they were victorious, they loved it. If they failed to win, they claimed another play was in order to get an “objective point-of-view”. One Gamer Geek suggested this was the perfect game to break ties among players in other games, instead of simply counting different victory points. 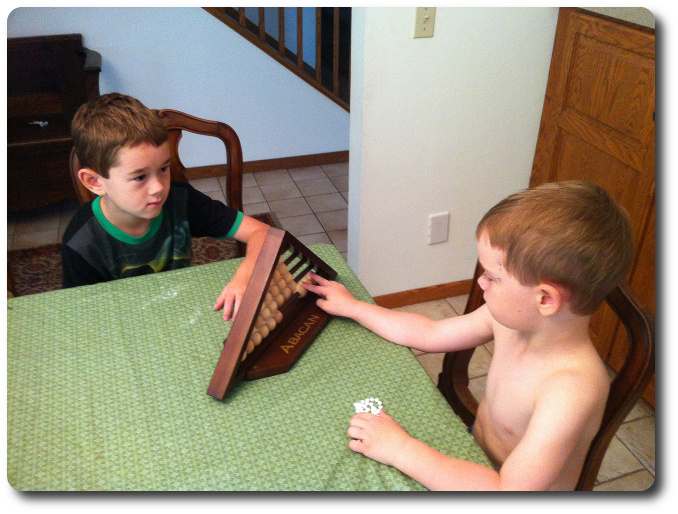 As my two little geeks face each other for another game, I take a moment to ponder where my 2-year-old has run off to – Hint: he’s under the table

Gamer Geeks, this is a very fast and very straightforward abstract game. Abacan will quickly accelerate from easy-breezy to focused bead counting. The wiggle room a player has becomes smaller and smaller until there are only a few beads left to move. From the very start, however, each bead moved is meaningful, although the results might not be apparent until the end of the game. I’m sure a mathematician could tell you exactly how to win this game the majority of the time, but where’s the fun in that? Try to out-think you opponent and outmaneuver them, forcing them to move the last bead as you look on with a victorious grin.

Parent Geeks, this is a very simple game to explain to your little geeks, family, and friends. Non-gamers had no problem understanding the game and greatly enjoyed it. The level of frustration will quickly increase, however, if a single player continues to be forced to move the last bead. Instead of just calling it quits, use it as an opportunity to discuss how they are playing. Odds are they are just moving beads at random. While this might work some of the time, it certainly won’t work all the time. Thinking is required and removes any luck that might be part of the game, awarding the player who takes the time to rationalize their moves.

Child Geeks, this is a fast and challenging game that will leave you wanting more, despite if you lost or won the game. Easy to set up but hard to master, Abacan will test your thinking and your strategy as the game progresses. The number of beads you can move is quickly reduced and forces you to sharpen your mind and focus in on each bead as a game changer. Don’t be afraid to take your time, despite the game’s short game play length. On your move, think about what you should do that will put you in the best position and you won’t go wrong. Be nimble and react to your opponent’s moves and you’ll end up challenging them from start to finish!

Abacan is a fun game to play and certainly left me feeling pleased with it. The best part of the game, from a reviewer’s perspective, is that it was easy to teach and to get in front of our test groups. The game looks great and visually draws the players in. The game’s simplicity is also inviting as it doesn’t appear to be a very challenging game as you walk by it. Sit down for a game and you’ll change your mind. Put two players opposite of each other that are “serious thinkers”, and you’ve got a very interesting game on your hands. Even if the players were mismatched, no one player ever felt like they won the game with ease or lost the game without a satisfying fight.

If you are looking for a fast abstract game that is also a quality product and would make any coffee table feel really important if the game were to be set on top of it, then turn and gaze upon Abacan and give it a try. Your brain and coffee table will thank you.