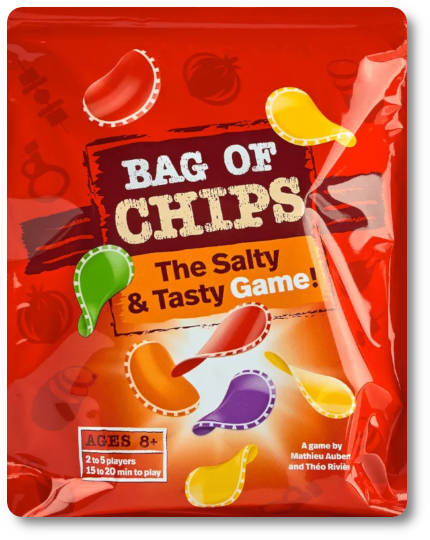 American celebrity fitness guru, entrepreneur, and former New York City Ballet dancer Mary Helen Bowers said, “Even if you’re having a snack, enjoying it in a beautiful teacup or on a lovely plate makes it feel like more of an event.” Players will enjoy this colorful game of risk and reward with friends at their table. The game is genuinely “snack size” in length and table space requirements, but will it leave our players feeling full and satisfied or make them crave something more substantial?

Bag of Chips, designed by Mathieu Aubert, Théo Rivière and published by Blue Orange Games, is comprised of 36 Objective cards, 4 Board cards, 25 Chip tokens (in five different colors), 16 Reward tokens, one Recap card, and one Bag of Chips which not only serves as the container of the game when not playing it but also plays a pivotal role in the game itself. The game component quality is excellent, with thick cardboard and cardstock throughout. In addition, illustrations by artists Hervine Galliou and Mathieu Lidon are colorful and minimal, brightening up the game without adding anything to the narrative or theme.

To set up Bag of Chips, complete the following steps:

Second, take the four Board cards and place them in the correct order in front of all the players in a row.

That’s it for game setup. Next, assign one player the role of the “Dealer,” who now takes the Bag of Chips. After that, everyone else grabs a snack and gets ready to play!

There are two types of cards in the game.

The first type of card introduced is the Board card. These are placed in a row on the table and used to help guide the players in the round, identifying the step of the round and the action to be taken. 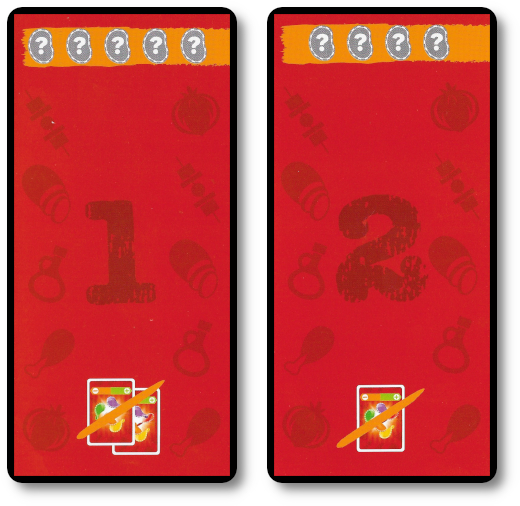 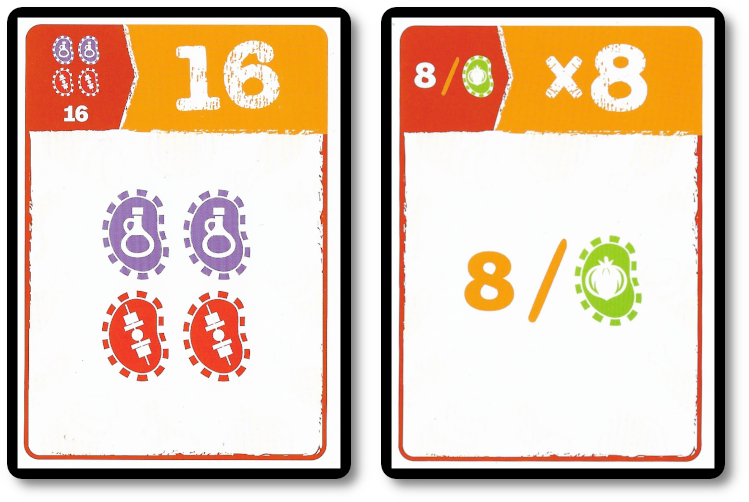 Bag of Chips is played in rounds with no set number of rounds per game. A game round is summarized here.

A quick word on the following breakdown of a game round. It will, at first read, appear very long and – perhaps – convoluted. However, while I go into detail about each of the steps, they are also summarized on the Board cards making it very easy and obvious what the players need to do next.

The Dealer takes the Objective card draw deck and deals to each player, including themselves, six Objective cards face-down. Any card not dealt is placed back at the end of the Board row. Players should look at their cards but keep them hidden from their opponents.

The Dealer now draws five Chips from the Bag of Chips, careful not to look at what they are grabbing. Finally, the drawn Chips are placed on the first Board card.

All players now look at their six Objective cards and select two to discard, placing them face-down in front of them and creating their discard pile. These cards are out for the duration of the game.

The players are trying to look at their Objective cards and determine which in their hand are unlikely to be scored due to the Chips that the Dealer is pulling.

After all the players have discarded two Objective cards, the Dealer draws four Chip from the Bag of Chips, placing them on the second Board.

All players now look at their four Objective cards and select one to discard, placing them in their discard pile.

The Dealer now draws three Chips from the Bag of Chips, placing them on the third Board card.

A quick word on the placement of these Objective cards.

Once all the players have placed their cards, they are turned face-up and revealed simultaneously. If any of the revealed Objective cards are impossible to complete, they are discarded now.

The Dealer now draws two Chips from the Bag of Chips, placing them on the fourth and final Board card.

All the Chips are now revealed, and it’s time to score points!

Each Objective card is evaluated to determine if what is noted as the requirement is fulfilled via the random draw of the Chips during the round.

All players calculate their points and are then compared.

Earned Reward tokens are kept visible throughout the game.

This ends the round.

Grabbing More Snacks or Calling It

The game ends at the end of the round if one or more players have earned four or more Reward tokens. The player with the most Reward tokens wins the game!

If none of the players have the required number of Reward tokens yet, a new round begins.

To learn more about Bag of Chips, visit the game’s web page.

The Child Geeks had a wonderful time, finding the game easy to learn and fun to play. There was frustration, however, right from the start, but never to a point where the game was no longer enjoyable. According to one Child Geek, “I think it feels bad when you have to get rid of a card early in the game only to know that was the card you needed to keep.” This Child Geek makes a great point echoed by her peers and other groups. Bag of Chips does force a player to start making choices very early in the game with little information to go on. Another Child Geek, however, had an exciting counterpoint. He said, “The game is about making choices that are sometimes easy and sometimes hard, but you are never left without a choice.” That is a very positive way to think of it. When the last chip was eaten, the Child Geeks all voted and determined that Bag of Chips left them full and happy.

The Parent Geeks also found the game to be entertaining, if not slightly dull at times. According to one Parent Geek, “I like the game and found it interesting that you had to pick your cards with an evergrowing amount of information at your disposal. The game became repetitive after a bit, but my family always enjoyed the outcome of each round.” Another Parent Geek said, “A party game for those who like calculating risk! Worked great at our family table and with the kids. My wife and I played it together and liked it, too. A fun and quick game.” When the last chip was put back in the bag, the Parent Geeks took a vote, and all decided that Bag of Chips was a game they’d dip back into.

The Gamer Geeks appreciated the game’s visual, brightly colored appearance and the straightforward approach of evaluating risk versus reward, but that’s it. According to one Gamer Geek, “It’s a solid game and tedious. Each choice becomes easier, which feels like it should be the other way around. The game’s speed comes to a crashing halt when you have to calculate scores, but since it is at the end of the round, I didn’t mind it very much. I did mind how some players spent too much time picking the right card. You cannot. It’s a game about luck and outcomes. I’ll skip this one going forward.” Another Gamer Geek said, “Fun with the family and with casual players, but I wouldn’t want to play this game again, even as a filler. Decisions felt forced at times, information was always available but never complete enough to be of real value, and it was only towards the end of the round that the player felt fully empowered but was limited due to the cards in their hand. A neat concept but not for me.” When the Bag of Chips was put back on the shelf, the Gamer Geeks took a vote and decided not to reach for it again.

Bag of Chips is random, simple, and gimmicky. It’s also the perfect length and weight for players who like to dip their toes into the “high risk versus high reward” game without putting much time into it. In short, it’s a game that stays just long enough and provides enough challenge to be of value but not of great importance. Bag of Chips is casual fun, and it knows it. It doesn’t try to be anything more than that, and it delivers the same experience every time without hesitation.

This is why our elitist players dropped Bag of Chips, as one would drop a stale bag of chips in the trash. There is little to get hungry over, and the amount of depth to the game can be measured by the tip of your pinky finger. This game will not burn your brain or challenge your gaming skills. Instead, it will challenge your patience, as the Gamer Geeks reported.

And that is great! If Bag of Chips was a game that tried to do anything more than what it’s doing now, I think the game would fail. The only task the game didn’t complete was winning everyone over. That isn’t easy, and for those who didn’t like the game, it was clear why they didn’t: Bag of Chips wasn’t a game for them. Given that and what I’ve played, I found Bag of Chips flawless and straightforward in its execution. It delivered exactly what it said it would and consecutively provided me a means to test my reasoning skills while at the same time knowing everything about the game was random.

Random and fun. Exciting at times and a bit tedious at others. A great length with just the proper depth that kept it coming back to the gaming table. Do take the risk and play this little game. I think you’ll find it tasty, but it will leave you wanting more if you like a game with more depth.