Please Take Note: This review of the final game might change slightly based on the success of the Kickstarter campaign. The game is being reviewed on the components and the rules provided with the understanding that “what you see is not what you might get” when the game is published. If you like what you read and want to learn more, we encourage you to visit the game publisher’s website or the Kickstarter campaign. Now that we have all that disclaimer junk out of the way, on with the review. 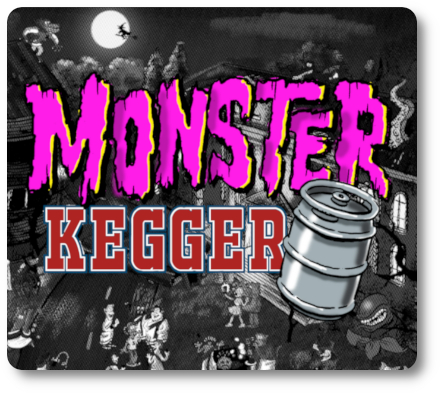 American author and Billiard Congress of America Hall of Fame instructor of pool and carom billiards, Robert Byrne, said, “Partying is such sweet sorrow.” Truly, throwing a party and being at a party takes work. You have to be energetic, personable, and approachable. Or not, and sit in the corner sulking while everyone around you has fun. In this game, you must try to keep everyone at your party happy, and the only way to do that is to ensure you have the right food and drink available. The catch? Your guests are monsters and have particular likes and dislikes. You and your opponent are competing to see who can throw the best party for these monsters!

Monster Kegger, designed by Derek Saenz and Tim Schoen, and to be published by Toga Pig Games, is comprised of 43 Monster cards, eight Party Favor cards, and three Reference cards. As this is a review of a prepublished game, I cannot comment on the game component quality. The provided illustrations are bright, colorful, and comical. This makes the monsters in the game easy to play with your youngest Child Geeks.

Second, shuffle the Monster deck, placing it face-down in the middle of the player area.

That completes the game setup. Time to party!

Monster Kegger is played in rounds with no set number of rounds per game. A single game round is summarized here.

Step One: Flip Over Monster Cards

For the first game round, one player flips over five Monster cards, placing them face-up in front of both players. Stack similar Monster cards together in a row. These are the monsters showing up at your party. 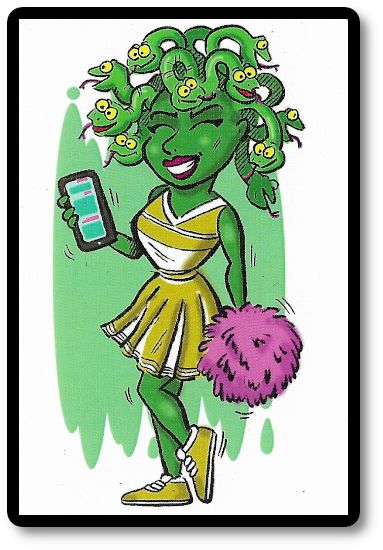 You’ll flip over the cards differently for the second and subsequent rounds of the game. 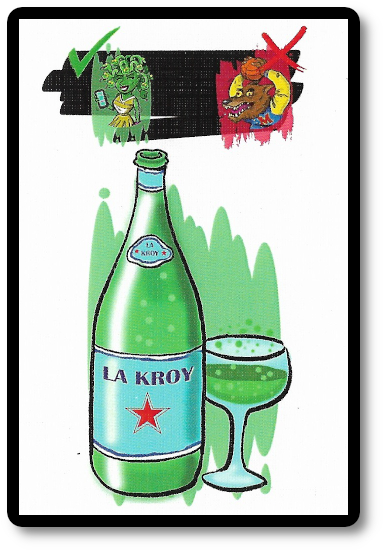 If the Player Wins the Flip

The player takes all the Monster cards of the type that like the Party Favor, placing them in a stack next to them, but only if their opponent didn’t play a Party Favor card that blocks that same Monster type. Then, return the played Party Favor card to its owner’s hand.

It is possible to also win the “Delivery Guy,” a Monster-type card you can only win by winning the round without being blocked.

If the Players Tie

Neither player collects any Monster cards. Instead, return the Party Favor card to its owner’s hand.

For example, a player used the “La Kroy” Party Favor. As a result, they win the “Medusa” Monster and block their opponent from collecting the “Werewolf” Monster.

This completes the round. Play additional rounds until the end of the game.

The endgame is initiated when the last Monster card is taken from the draw deck and put into play. Continue to play until only one Monster type is left, be it a single card or a stack of similar Monster-type cards.

Now players determine who the winner is. This is done by both players counting the number of Monster cards they collected. The player with the most Monster cards collected wins the game!

To learn more about Monster Kegger, visit the game publisher’s website or the Kickstarter campaign.

The Child Geeks enjoyed the game and found it silly, fun, and fast to play. They had no issues learning how to play and were experts at throwing a party for monsters after only one game. According to one Child Geek, “I like the game. You have to think about what monsters you want, but you cannot be greedy. You will be blocked each time if you always go after the big stacks of monsters.” This Child Geek quickly saw that looking to collect less was often a great way to win big. Another Child Geek said, “I liked it! It is about monsters and a party. I think it is gross that they had a brain in the jar, but I liked how they liked the pizza! I like pizza, too!” When the last Monster was kicked out of the house, the Child Geeks surveyed the gaming table and unanimously voted that it was a party they would gladly throw again.

The Parent Geeks were not enthusiastic. According to one Parent Geek, “My kids loved it. I did not. It wasn’t a brainless exercise, but nor did it feel like I used much of my brain. The way to collect cards is obvious enough each time. I do like how the game teaches you – harshly – that being greedy won’t win, but then again, the game is so short and shallow I don’t think my kids made that deeper connection with the gameplay.” Another Parent Geek said, “Great for the kids, and thank goodness it’s short because all my kids have wanted to do is play this game. I get it. They love it, and I love them, which is why I was happy to play it. But for parents, this game is not a lot of fun. You play it for the entertainment value with the kids, to which it provided plenty.” When the last Red Cup was put in the trash bag, the Parent Geeks all agreed that the party wasn’t for them.

The Gamer Geeks were having none of it. One Gamer Geek stated, “A pointless and shallow game that is slightly better than War. I wouldn’t recommend this to gamers and would be surprised if anyone other than the youngest and most inexperienced players enjoyed it. Sure, you can make it into a drinking game, but what’s the point?” Another Gamer Geek said, “No. Not for me. Not for anyone over ten or capable of tying their shoelaces. A real miss for adults. For the kids, they’ll love it.” Harsh and critical as ever, the Gamer Geeks bulldogged through their game to ensure they fully understood it. Finally, after three games, they put it aside and took a vote. Not surprising, they turned it down, rejecting it swiftly.

Monster Kegger is simple fun. Simple and fast, too. It played great with our youngest Child Geeks and was always a hit. The staying time on the table is short, but so was the number of times the Child Geeks wanted to play the game. On average, they’d play two games and call it quits, giving both players a chance to win. Seldom did a third or fourth game get put on the table, despite how easy it is to reset the game and go again quickly. I liken this mainly to the game’s lake of depth. You play it once, and every game you’ll play afterward feels the same. The only difference from game to game is the order in which the Monster cards come into play, which is neither exciting nor empowering to the player. Random occurrences do not make for excellent outcomes.

Despite the lack of love it received from the Parent Geeks and the Gamer Geeks, Monster Kegger was a game that found time on all our tables and entertained our most casual players. For that, it received high marks from our Child Geeks. Everyone else, not so much. Try this game at your next kegger or mixer to see if it brings the Monster out in you.