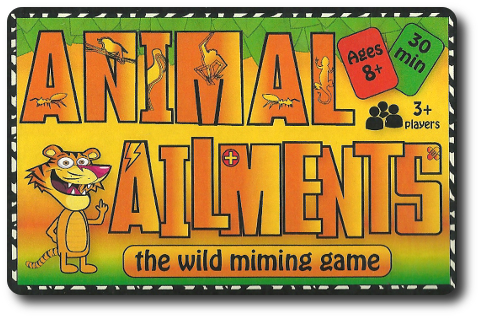 French actor and professional mime, Marcel Marceau, said “What sculptors do is represent the essence of gesture. What is important in mime is attitude.” In this game, players will be tasked to mime a random animal and a random ailment that plagues them. If time allows, they can steal cards, quietly, from opponents and gain additional points!

Animal Ailments, designed by Barnslig Park and to be published by Bazaar Broz, will reportedly be comprised of 1 sand time (about 60 seconds), 75 Animal cards, and 75 Ailment cards. As this is a review of a prepublished game, I cannot comment on the game component quality.

To set up the game, shuffle the two decks separately, place face-down in the middle of the playing area, and grab the sand timer.

The Sound of Silence

Animal Ailments is played in turns with no set number of turns per game. A player’s turn is summarized here.

The active player takes two cards, one Animal and one Ailment card. The active player should keep these cards hidden from their opponents and not look at them until they flip the sand timer.

The active player takes the sand time and flips it over. The goal is to now mime the animal noted on the card. The active player can use hand gestures and body movements, but cannot make any noises. If the player doesn’t like a card they have drawn, they can “pass”, allowing them to discard that card and draw another, but the sand timer is never reset! 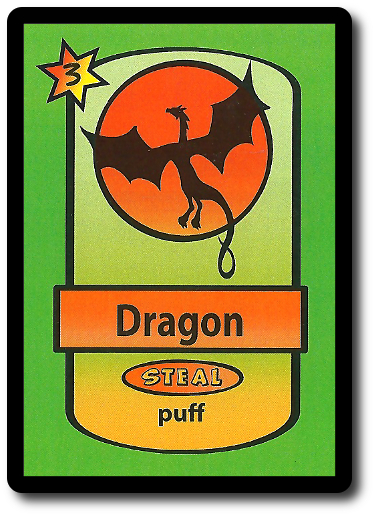 A player could draw an Animal “Powerup” or an Ailment “Penalty” card. Powerup cards can be used immediately or kept for later. Regardless, the player must immediately draw a new Animal card. If the player draws a Penalty, they must complete the action described on the card first and then draw a new Ailment card. 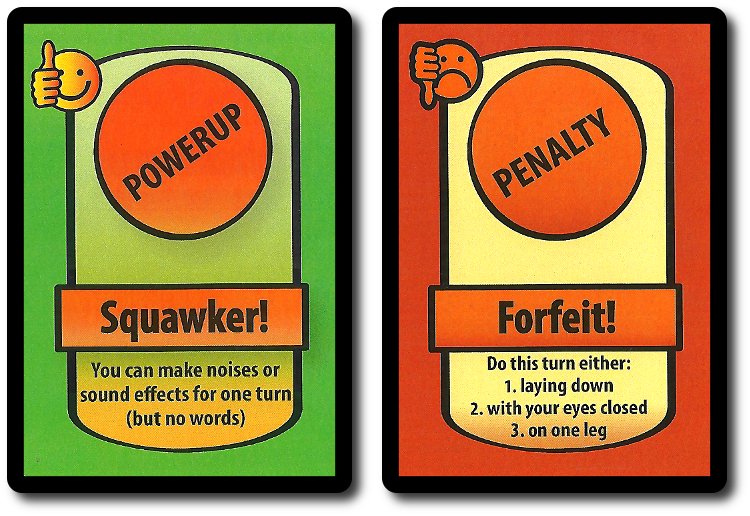 All the other players now attempt to guess what the animal the active player is attempting mime. Guesses are shouted and players can continue to guess for as long as the game turn allows via the sand timer.

If any opponent guesses the active player’s animal, they immediately begin to mime their ailment noted on their drawn Ailment card. Again, the active player can use hand gestures and body movements, but cannot make any noises. 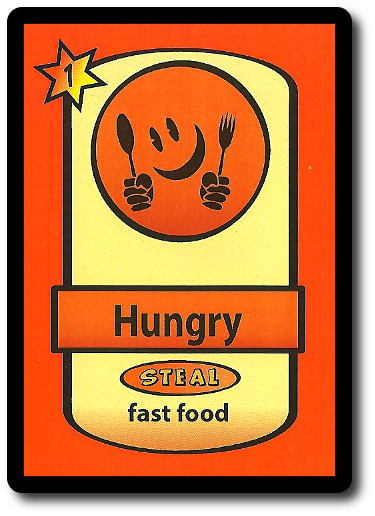 Guesses are shouted and players can continue to guess for as long as the game turn allows via the sand timer. A guess with an ailment must also include the animal. For example, if the Animal card is a “Dragon” and the Ailment card is “Hungry”, the opponent must shout “Hungry Dragon” in order to get the combo.

If there is ever a tie, the active player decides who guessed the closest or provided the best guess when awarding the Ailment card.

If the active player is able to have both their Animal and Ailment card guessed with time to spare, they can attempt to “steal” instead of ending their turn. Each card has a Steal Mime value. If the active player is able to get an opponent to correctly guess it, they can steal any Ailment card from the draw deck or from one player, except from the player who accurately guessed the Steal Mime value. If there is still time after they complete their first Steal Mime, they can attempt to do the second.

If the same opponent is able to guess both the Steal Mime values during the active player’s turn, they are awarded an additional turn on their next turn.

The base game comes with two additional rules that can be introduced to spice up the game. They are summarized here.

The active player can attempt to mime both the Animal and Ailment card at the same time. Successfully going the extra distance not only scores a point for the active player, but they can also steal a card and choose which opponent goes next.

Turn Up the Volume

The active player is allowed to make noise in addition to their normal gestures. Only sounds, like animal noises or sound effects, are allowed. The active player cannot speak any words (real or imaginary). For example, the player could make a sound like a cow (“moooo!”), but could not say “I’m a cow”.

To learn more about Animal Ailments, visit the game’s website or visit the Kickstarter campaign.

As expected, the Child Geeks enjoyed themselves, finding the game to be fun, challenging, and hilarious. According to one Child Geek, “I couldn’t stop laughing and it was my turn to mime the animals. I didn’t get any points on that turn.” Another Child Geek said, “What I like is that there are always different combinations. It means you always have to be creative.” The only aspect of the game the Child Geeks didn’t like was the stealing of points and what they believed to be a sand time that was way too fast (we timed it, it was fine). When the last animal was guessed and the last point scored, all the Child Geeks agreed that Animal Ailments was a game they very much enjoyed.

The Parent Geeks enjoyed the game, too, both with their peers and with their families. According to one Parent Geek, “When I play with my family, I find it to be a lot of fun trying to guess what my kids are pretending to be. When I’m with adults, all I can think of is trying to be the very first to guess so I can get the points!” The game was well received by those Parent Geeks who enjoy party games, but often found game of that type to be less than competitive. Not the case with Animal Ailments. As one Parent Geek put it, “This is a game you really need to pay close attention to and be attentive. If you don’t, you’ll never gain any points.” All the Parent Geeks voted to approve Animal Ailments, giving it two big thumbs up.

The Gamer Geeks were not in the slightest bit impressed. According to one Gamer Geek, “This is nothing more than Charades with random cards. No thanks.” Another Gamer Geek said, “I think the game would play well with parties and kids, but not with gaming elitists. The game is too silly and too trivial to be of any genuine interest to a player looking for something with strategy and tactics.” And yet, the more they played it (I ask all my groups to play the games we review multiple times), the more they got into the game play. After several games, they started to warm up to it. One Gamer Geek reported, “The game has merit and it is fun, but I still think it is best played with kids or mixed skill level groups. This is most certainly a party game.” The Gamer Geeks voted to reject Animal Ailments.

The game is fast and fun. The powerup and penalty cards add a bit of a twist and I liked how players could go for additional bonuses beyond just the points to catch up if they were falling behind. Several games were won due to players stealing cards, which is not as easy as it sounds. First off, by the time a player attempts to steal a card, they have very little time remaining on their turn. Second, all the opponents know you are attempting to steal a card and may not participate.

And this is where Animal Ailments has a bit of trouble. If the players are not actively always trying to guess, the game falls apart. Expect players to be loud and interact during the initial part of the active player’s turn and then go completely silent if that same active player attempts to steal. There are no additional points to be won, so there is little need for the opponents to participate. The trick is to slide in a steal without the opponents knowing. Not an easy task, but a fun challenge.

Overall, I found Animal Ailments to be a fun new take on the old game of Charades, adding a bit of chaotic randomness and infusing it with the need to be as competitive as possible. I think the game would be well received by families and school classrooms. Adults will also find the game to be entertaining at parties. Gaming elitist won’t find anything to talk (or gesture) about here.