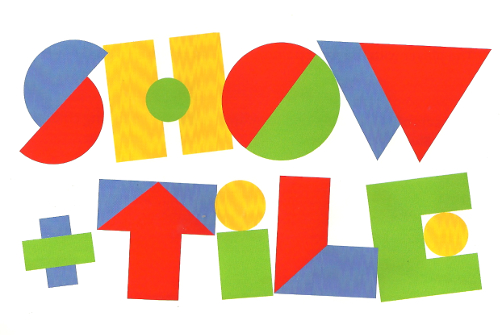 Show & Tile, designed by Matt Loomis, Isaac Shalev and to be published by Jellybean Games, will reportedly be comprised of 24 Large Triangle pieces, 12 Medium Triangle pieces, 24 Small Triangle pieces, 12 Square pieces, 12 Rhombus pieces, 6 playmats, 105 Word cards, 1 sand timer (about 90 seconds), and 1 score pad. Not included with the game, but necessary to play, is a pen or pencil. As this is a review of a prepublished game, I cannot comment on the game component quality. The review copy we were provided included thick pieces and playmats, making our demo copy a very durable game to play with our groups. If this is any indication of what the final product will be, gamers are in good hands.

To set up the game, first give each player 1 score sheet, a pen or pencil, and a set of pieces. A “set” includes 4 Large Triangle pieces, 2 Medium Triangle pieces, 4 Small Triangle pieces, 2 Square pieces, and 2 Rhombus pieces of the same matching color. The pieces have different colors on each of their two sides. For example, “red/blue”. Keep this in mind when giving out the pieces.

Second, shuffle the Word cards and place the deck face-down in the middle of the playing area. This is the draw deck for the duration of the game.

Third, have each player write the names of their opponents on their score sheet. 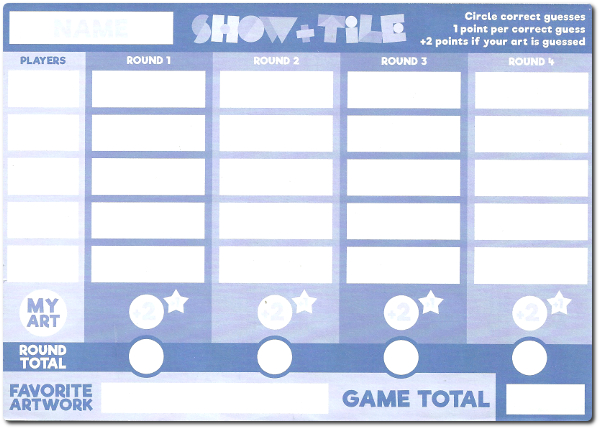 That’s it for game set up. Get ready to be creative.

Show & Tile is played in rounds for a total of four rounds per game. Game play is simultaneous, meaning all players are active during the round at the same time. A typical game round is summarized here.

Have each player draw two Word cards. Players should keep their cards hidden from their opponents. Each Word card will have several words, including a word in a star that is considered more difficult (and worth more points, as a result). Each player must select one word (always a noun) and place the Word card that has their selected word face-down in front of them. The other Word card is discarded face-down next to the draw deck. 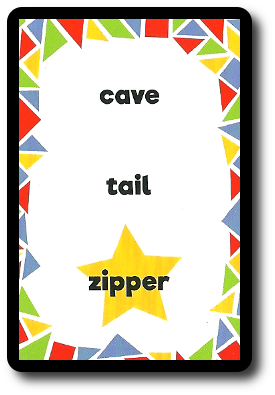 After each player has placed a Word card face-down in front of them, one player flips the sand timer over and shouts “Go!”. All players now use their pieces to build the word they selected by arranging the pieces on their playmat. There are no set rules regarding how the player goes about building their word. A player can use all or as few of their pieces as they like. If the player feels it’s necessary, they can even layer their pieces. Examples of words and how they can be “built” are shown here. 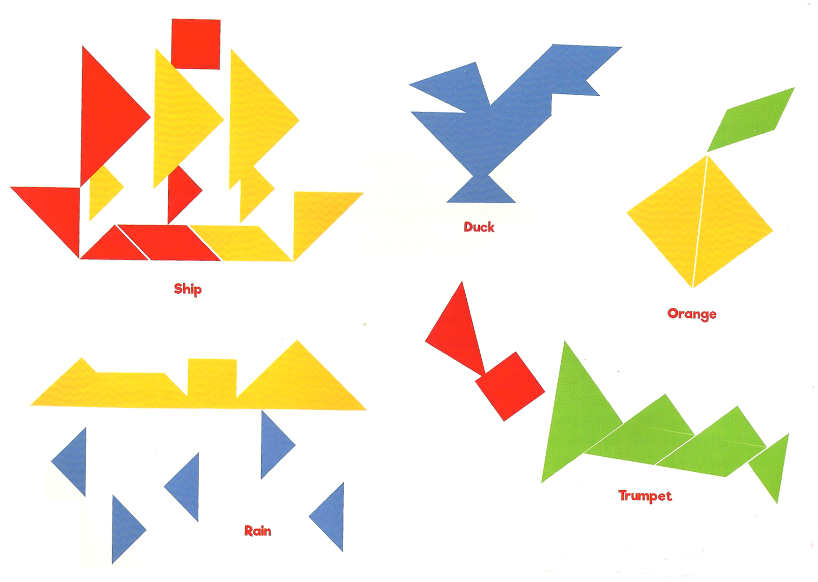 After the sand timer runs out (or all players announce they are done), players rotate their playmat so what they built is facing the player’s opponents. The sand timer is again flipped and players write down on their score sheet what they believe the word is for each of their opponents artistic offering.

The artists of each word cannot provide any clues. This includes making noises, making witty comments, or gestures of any kind.

After the sand timer runs out (or all players announce they are done), each opponent announces their guess for a single player. That player then reveals their Word card, announcing the word they attempted to build using their pieces.

If no opponent correctly guesses the artist’s word, no player scores any points.

This step is repeated until each player has their word guessed. After the final guess and scoring, a new round begins by first discarding all Word cards in play.

The game ends after the fourth round. All players count up the points earned during the four rounds of game play. The player with the most points wins the game.

To learn more about Show & Tile,  visit the Kickstarter campaign.

The Child Geeks found Show & Tile to be both entertaining and hilarious at times. According to one Child Geek, “So the goal is to create a picture that everyone guesses, but some of my friends have no idea how silly their art is.” Truly, the creative mind has a lot of room to roam in this game, resulting in some very unique interpretations of words in an abstract freestyle, minimalist structure. As one Child Geek put it, “Sometimes the hardest things are also the easiest things.” Strangely deep, and in many cases for the Child Geeks, spot on. Where they struggled the most was to recreate the simplest of the words, oftentimes going overboard in their builds. Nevertheless, the Child Geeks always walked away from the game with a smile, resulting in a strong endorsement from our young players.

The Parent Geeks found Show & Tile to be a game that worked well with their family and with their peers, both as a family game and as a light social game. Be there wine or milk at the table, fancy cheese or animal crackers, the game was always a hit and paired well with both audience and social gathering. According to one Parent Geek, “Games like this always make me happy. They allow me to be creative without feeling the pressure to be creative. Does that make sense?” Indeed it does. Show & Tile is not a race, but there is a time limit (mostly to ensure the game doesn’t slow down) and the goal is to always be as visible and as open as possible. You want people to guess your word, which removes the difficulty often added to games that require some form of subterfuge. As one Parent Geek said, “Games like this invite you to be creative and share.” All the Parent Geeks voted to approve Show & Tile, giving it a big thumbs up for entertaining family and friends.

The Gamer Geeks appreciated the game from an academic point (that is to say, they all agreed that Show & Tile was a game), but didn’t ever feel that it was a game for them. According to one Gamer Geek, “The rules are solid and the objective is clear. I like how simple the game is, as far as light rules. What I don’t care for is that there isn’t much of a game here.” Which is to say, the Gamer Geeks hunger for gaming experiences with depth that require strategy and tactics. While Show & Tile challenged them creatively, it never engaged them at a level where they felt invested. As one Gamer Geek put it, “This would be a great game for my kids and family, but I don’t believe it was ever a game meant for anyone other than casual players.” In the end, the Gamer Geeks gave Show & Tile a respectful nod, but stopped short of approving it for elitist gamers.

What I found the most interesting about the game is that no matter what the word was, and regardless if any of the players guessed the artist’s word, everyone always “saw” the word when it was identified. Lot of “Oh, I see it now” and “Ah, of course!” responses at the end of the round. Equally as fascinating, none of the feedback given by the player’s opponents ever seemed to influence their creative approach to building words. People did what they could in a way that made the most sense to them. You’d think that a player would go out of their way to ensure that their peers could guess the word, but that was not the case per our observations. Instead, players had fun on their own terms. If their opponents guessed the word, all the better. The joy was found in the creation, not in the attempt to play to another’s guessing aptitude.

Here’s a pro tip right from Father Geek. Always go for the star words. You get more points and the word itself is not that crazy difficult. Yes, a bit more abstract, but players are building words out of tangrams here. Abstract is what the game is all about. And here is another tip, because I like you so much. Bring a dictionary to the table. Some of our younger players didn’t know what a word meant. Normally, I’d suggest to that player that they pick another word, but that also suggests (and incorrectly so), that the other words are easier. By providing a dictionary, you empower the player to not only learn, but to also select the word that they really want to use.

I’ve played a number of tangram puzzle games in the past and they always end up being the same thing: build something abstract based off something concrete. Show & Tile is no different and is neither better or worse off for it. Its simple approach to creative problem solving is easy to teach and fun to work with. Some players might feel frustrated at first, but the goal of this game (and I cannot believe I’m saying this) is not to necessarily win. From my perspective, it appears that the game designers threw in the scoring to make the game feel somewhat competitive. But it isn’t. This is a social game where players want their opponents to be partners. This makes Show & Tile a semi-cooperative party game at best, where players need each other to succeed, but in the end (according to the game rules) there is only one winner. I would argue, however, that anyone who plays Show & Tile will walk away from the table feeling like they were successful.

Do try Show & Tile when time allows. It’s a great game for the family, for schools, and for anyone who likes to be creative. Best of all, it’s a game that lets you slow down, focus in, and have fun.