Who Would Win: The Ultimate Celebrity Showdown Game Review 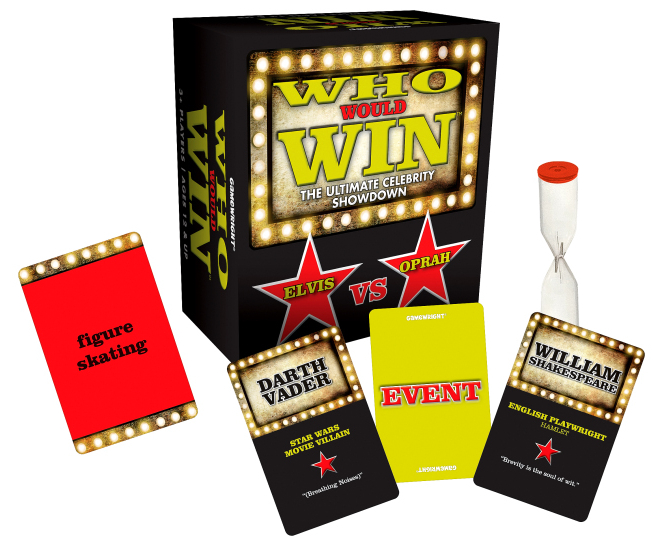 In Who Would Win: The Ultimate Celebrity Showdown, 3 or more players take turns arguing why two randomly selected famous characters (who might or might not be real) would win a randomly selected event. Each player is given a very short amount of time to make their case to the other players, attempting to convince them that their selected famous character would win. In the end, the majority decides the argument and all the listeners get to cast their vote. To the victor goes a point and one step closer to victory.

This game is comprised of a single 20-second timer and two different decks of cards, the Character deck and the Event deck. The cards are of good quality and the writing on them easy to read. The timer is the typical type you’d see in other games where a player simply turns it over to start the count down, much like you would with an hourglass. All the game components fit in a very small box making it easy to take on trips or to a party.

To set up the game, remove the Character and Event decks and shuffle them thoroughly, keeping the decks separate. Set these two decks aside with the timer close by. The players then decide who the first timekeeper will be. The game is now ready to play. Boy, that was simple…

The next player in the rotation, who we will refer to as the “challenger”,  also takes a Character card and the Event card is drawn and read out loud by the timekeeper. As soon as the event is read, the timer is started. The lead player now has 20 seconds to argue their case and attempt to persuade the other players, including the timekeeper, that their selected character would win the event. The argument can be delivered matter-of-factly, over the top, or somewhere in the middle. After 20 seconds, the challenger is given 20 seconds to make their case. Finally, the lead character is given a 5 second rebuttal, wherein they attempt to refute the challenger’s claims. In total, both arguments combined should not take anymore than 45 seconds making each game round fairly quick.

At the end of the 5 second rebuttal, the timekeeper asks all the other players “who would win” and everyone, except the lead and challenging player, points to the player who they believe made the better argument. The vote is tallied and the winner declared. To the victor, a single point is earned. In case of a tie, no one is awarded any points.

An example of a very real possible debate is who would be better at Rock, Scissors, Paper? Chuck Norris or John Shaft. Jeepers, what an epic debate that would be! I mean, CHUCK NORRIS! What can’t he do? But then again, JOHN SHAFT! I get a nose bleed just trying to determine who the winner would be…

Once the point is awarded (or not, in case of a tie), play continues with the lead player becoming the new timekeeper and the person directly to the left of new timekeeper becomes the new lead player. Alternatively, you can have the same person be the timekeeper for the duration of the game. That’s what we did and it worked just fine.

The winner of the game is the first player with five points!

There are two variations on the original game rules. These are Team Play and Shorter Play.

Two or more players are grouped together to form a team. The players can take turns, cooperatively argue, or even interrupt and speak over each other. This makes “couples game night” something of real interest again.

If you want to reduce the game length based on player or time restrictions (i.e. my little geeks have a limited attention span), simply reduce the number of necessary points to win the game. The suggested method is to reduce the necessary win to 4 points if you have exactly four players or more than eight players. My family played to 3 points (best 2 out of 3) which made for a fast and fun game.

I didn’t need a crystal ball for this one. My two oldest boys love to debate things. For example, the fact that it is not time to go to bed, eating the broccoli will, in fact, kill them, and they “didn’t do it“, whatever that “it” might be. It will, therefore, come as no surprsie to me if my two oldest little geeks love this game for two reasons. First, as I have already eluded to, they get to argue. Second, what they are arguing about is complete and total silliness.

“Can I be Darth Vadar? He can win anything! Even against Chuck Norris!” – Liam, age 6

Clearly, my boys failed to grasp the game mechanic of “randomly selected characters”. Still, their enthusiasm makes me overwhelming confident that this will be a little geek and family game winner.

Also, I could not be prouder that my son knows who Chuck Norris is. Seriously, I cried a single tear of joy.

As expected, this game was a hit. Great success with the adults and the little geeks. While my sons were not able to debate as well as the adults, they greatly enjoyed the challenge and the fact that they were highly entertained by the crazy stuff the adults were saying when they were trying to persuade the other players.

My two oldest’s boys did a fantastic job with their debates against each other, but it took them a bit to warm up to the game and how it was played. It helped immensely to watch how the adults did it first. When you play this game with your little geeks, I suggest several warm up turns before playing the game “for realsies“. This will help them get their mind in the right focus and make the game go smoother. If they are not strong communicators yet, put them in a team with an adult or older little geek, that way they can still participate.

My two oldest had a fantastic geek moment when they were matched together and had to argue who would win at a spitting contest. Darth Vader or Santa Clause? My oldest drew Darth Vader (for which he was overly over joyed) and my other son drew Santa Claus. My oldest was able to read his card just fine, but I had to help my other son read his card. Reading the cards for your little geeks will not slow down the game or give one player a significant advantage over another. For those slightly less known characters in the Character deck, feel free to explain who the character is or simply draw another card at random. Random is random, after all. 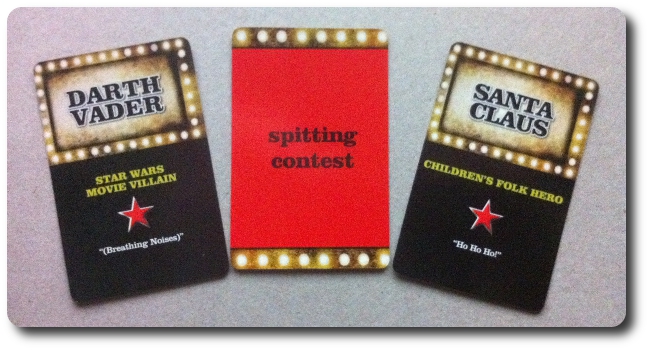 My oldest was the lead player and went first, arguing that Darth Vader would win because he would use the Dark Side of the Force to levitate the spit through the air with a Force Push, causing the collected wad of spittle go fly through the air at great speed and distance! An excellent and very plausible argument, to be certain!

My middle son was next and argued that Santa Claus would win because Darth Vader is wearing a mask and cannot spit because of it. HOLY COW! What a loophole my son found! Yes, Darth Vader could Force Push and levitate the spit, but he couldn’t spit to begin with! Outstanding reasoning skills from my 3 year old!

My oldest then had a 5 second rebuttal and explained that Darth Vader would use his evil powers to cause Santa Claus to not spit at all. Not a very effective rebuttal as it didn’t counter what my other son stated about Vader’s mask.

When the players were asked who would win, no one knew for certain! Both of my sons had done such an outstanding job arguing their case that it was impossible to determine who would win based on the arguments given! It was therefore a tie and no points were awarded. Turns out the rebuttal from my son was useful after all.

Despite no points being awarded to either of my sons, they had both scored major points with me. Not only had they argued intelligently, but they also showed they could listen to an argument carefully and use legitimate facts to strengthen their position. I was so proud, a second tear of joy was shed.

Sadly, not all of their debates were this good, but they weren’t too bad, either. They will only get better at the game as they get older, wiser, and cockier. Something to look forward to and dread.

This is a great party game. Lots  of silliness and fun to be had by all. But like all party games (and any game, actually), the game is only as entertaining as the folks who play it. If you are with a great group of creative people, this is going to be an outstanding game. Plus, with an almost limitless number of combinations with characters and events, this game will stay fresh for many, many game sessions. Teachers and instructors of public speaking would also benefit from using this game in their classes to help their students practice their debate and impromptu skills.

2 Responses to Who Would Win: The Ultimate Celebrity Showdown Game Review