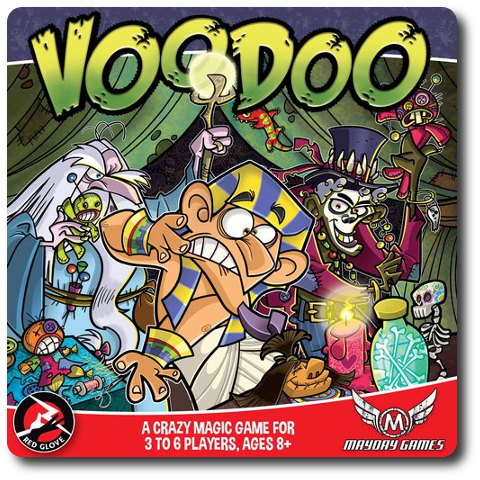 One of America’s most quoted writers of inspirational maxims, William Arthur Ward,  said, “Change, like sunshine, can be a friend or a foe, a blessing or a curse, a dawn or a dusk.” In this game, change will occur regardless of how a person feels about it. Expect to take on some strange new character traits as you and your friends attempt to outlast and out best each other as you hurl curses with little regard of its impact. You can always break your own curse, but expect the results to be less than beneficial. Sometimes it’s better to be cursed and unlucky if you want to win.

Voodoo, designed by Francesco Giovo, Marco Valtriani, and published by Mayday Games, is comprised of 10 Permanent Curse cards, 36 Curse cards, 13 Artifact cards, 12 Score markers, 5 Ingredient dice (custom six-sided die), 1 Target card, and one adorable little Voodoo Doll. Yes, an actual doll. The dice are solid with engraved colored images, the cards are as thick and as durable as your standard playing card, and the small stuffed Voodoo Doll is made of felt and string. Artist Guido Favaro has provided colorful and humorous illustrations on the cards to help identify what the card represents, keeping with the game’s theme and providing a quick visual reference for the players. 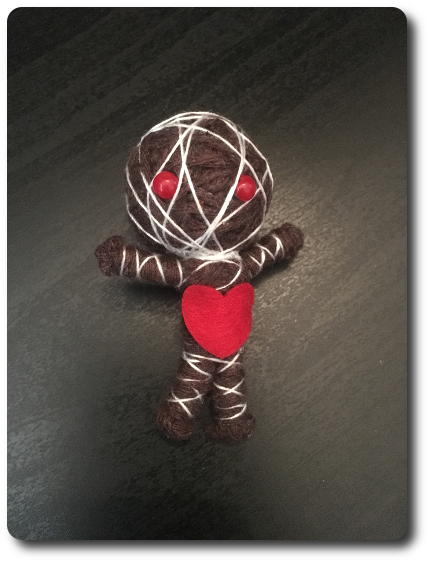 A quick word of caution. If you are like me, you will remove a game box insert because they get in the way, as they hardly ever help keep the game organized when you put it back on the shelf. Do not do that with Voodoo. The game insert is used as a scorekeeper.

Second, separate Curse, Artifacts, and Permanent Curse cards into their own decks, shuffling each and placing them face-down next to the game box.

Third, have each player draw one Curse card. If the Ingredient cost is not “two”, they should discard it and draw another. Players should keep their cards in their hand and not show them until played. Shuffle the Curse cards again if any are discarded.

Fourth, have each player select a color and take the matching Score Markers, placing them on the “0” space on the scorekeeper.

Fifth, determine who will be the first player and give them the Voodoo Doll. Feel free to give it a loving squeeze.

That’s it for game set up. Time to hurl some curses!

Voodoo is played in turns with no set number of turns per game. A player’s turn is summarized here.

Step One: Prepare Your Ingredients

The player takes the Ingredient dice and rolls them. If the player does not like the results of the roll, they can elect to remove one die out of play and reroll whatever dice are left. This can be repeated as many times as the player likes as long as there is at least one die to roll.

When the player is satisfied with what they have rolled (or forced to stop), they leave the dice that will be used for Ingredients in front of them, making sure to keep any dice that were removed away from their game playing area. I suggest players put them in the box or hand them to their opponent for “safe keeping”.

The player can now take any of the listed actions below and in any order. Most actions require the player to use Ingredient dice. If they do not have the right number or type of Ingredient dice, they cannot take the action.

This action requires the player to discard any two Ingredient dice they still have available. The player then draws one Curse card, adding it to their hand. 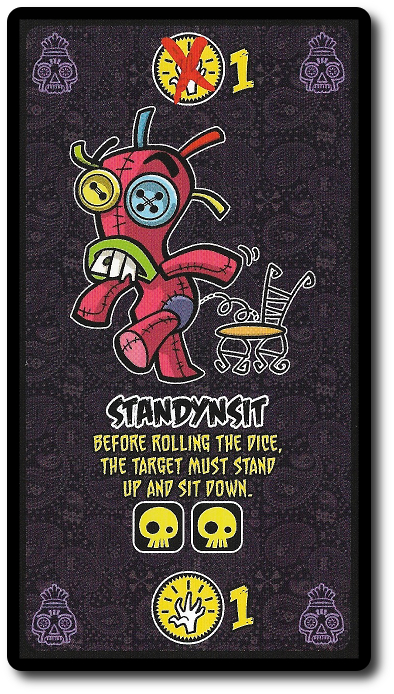 This action requires the player to discard any two Ingredient dice they still have available. The player then draws one Artifact card, adding it to their hand. 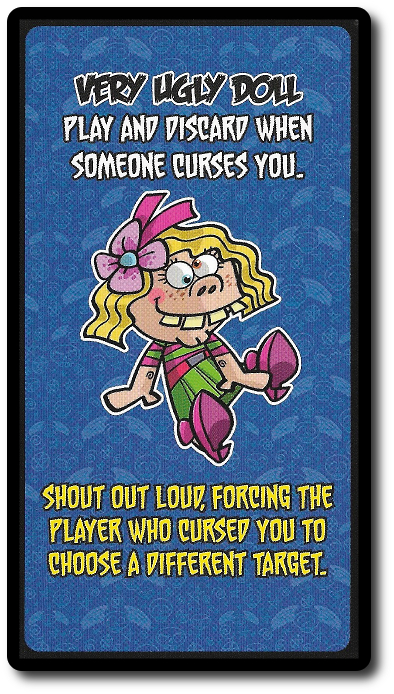 This action does not require any Ingredient dice. Instead, the player takes one Artifact card from their hand and puts it on the bottom of the Artifact draw deck. The card’s effect immediately comes into play. Note that some Artifact cards can only be played when certain game conditions are met.

Cast a Curse and Collect Points

The Curse card is then read out loud. The player who cast the curse then collects the number of points the Curse card is worth, adjusting their Score marker on the scorekeeper as required. If an opponent is holding the Target card, they cannot be the target of any curse.

Listed on the scorekeeper are three “Big Skull” spaces. When a player’s Score marker lands on or passes this space, they collect one Permanent Curse card and plays it on themselves. The player must now follow the instructions of that curse for the duration of the game. 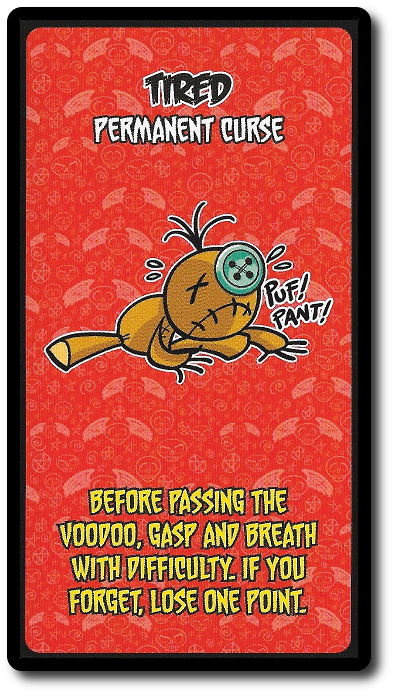 After the player has completed their actions, they pass the Voodoo Doll to the next player in turn order sequence.

The Curious Fun Side of Curses

In Voodoo, players will be the target of curses. Curses add rules to the game that the player must follow or they face consequences. The player’s opponents are expected to “help” the player follow the rules of the curses in front of them. Curses will impact how a player passes the Voodoo Doll, plays cards, interacts with opponents, and reacts to events in the game. All players are encouraged to have fun and really ham it up.

Game play continues as described above until a player scores 11 or more points. The first player to do so wins the game!

To learn more about Voodoo, visit the game’s web page.

The Child Geeks had fun at first but eventually got tired of the game. According to one Child Geek, “I liked it at first, but there are so many curses you have to keep track of. Starts to feel like work instead of just being fun.” A player can have any number of curses in front of them. This is part of the fun of the game, as designed. While the Child Geeks understood this, they also felt that the curses being put on them were starting to feel heavy. As one Child Geek put it, “I like the game and think if you changed the total points needed to win to only five, the game is better.” When all the games were over, the Child Geeks reflected, debated, and then voted. They decided that the game was “OK”, resulting in a mixed approval from our young geeklings.

The Parent Geeks thought Voodoo was a hoot. According to one Parent Geek, “Finally, a party game that lets you have a lot of fun at a party!” The Parent Geeks really got into it, making sure to penalize any peer who didn’t follow the rules of their curses, eagerly gobbling up the points. During one of the games, a Parent Geek had no less than five curses in front of them, plus two permanent curses. Watching this poor fellow go through the motions was hilarious. As one Parent Geek put it, “The best part of this game is watching your friends do stupid stuff.” When all the curses were set and the voodoo doll loving passed back and forth, the Parent Geeks all voted to approve the game.

The Gamer Geeks liked the game’s concept but found it gimmicky. As one Gamer Geek put it, “The game is OK for a party game, but it gets old pretty fast. The same curses are kept unless you want to break them and give your opponents points, which I don’t. I just felt like the game was all about adding nonsense instead of game play.” But one Gamer Geek disagree with this statement and said, “But nonsense is the game. I’d say the game is doing it exactly right.” This debate lasted another ten or so minutes with the two Gamer Geeks agreeing to disagree and then went off to play a two hour game of epic war on the high-seas. But before they did so, all the Gamer Geeks voted, resulting in Voodoo getting a mixed approval from our gaming elitists.

If you do not have the right people playing, Voodoo fails to impress. Unfortunately, game publishers have not yet found a way to include with the game components the necessary people required to make a game playable. This is a party game. You need people who like to party to play it. And by “party” I mean be loud, obnoxious, and outgoing. If you don’t, don’t bother.

If you do, wow, get ready to have some fun. Voodoo is all about putting as much craziness on a person’s shoulders as possible. You don’t have to memorize anything and players are highly encouraged to organize their curses in a way that allows them to follow the requirements in an order that makes sense. As the game progresses, you’ll have players go through some ridiculous motions.

The enjoyment level does start to drop off around halfway through the game. It starts to be the same thing over and over again. Seeing an opponent get up and walk around their chair, while snapping their fingers, and howling like a wolf a few times is funny. After ten or so times, not so much. Despite only being 30 or so minutes long, the game stays too long at the table. Any annoyance caused by this can be easily fixed by reducing the number of points needed to play (as suggested by the Child Geeks) or introducing alcoholic beverages into the mix. Either way, the game will plateau and it will be up to the players’ collective enthusiasm to carry it along. In most cases, this won’t be an issue. After all, the game is all about having fun and I’ve been told that people like that kind of thing.

Do give Voodoo a try with your family and friends. It’s good clean fun that will challenge players to step outside their comfort zone in hopes of gaining a few extra points. Win or lose, everyone will leave the table with a smile and more than one hilarious story to tell.