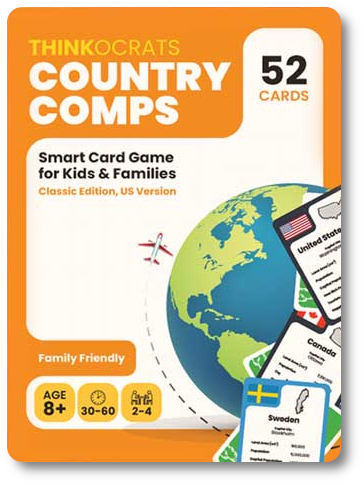 Italian polymath of the High Renaissance known for his paintings and creative mind, Leonardo da Vinci, said, “Learning is the only thing the mind never exhausts, never fears, and never regrets.” In this game, statistical information about 52 countries that comprise 93% of the world economy, 82% of the world population, and 73% of the Earth’s landmass are provided in an easy to read and compare values. Learning about the world has never been so easy! Leonardo would be proud.

Thinkocrats: Country Comps is comprised of 54 cards, two of which are instructions on how to play the game, and the remaining 52 cards detailing different countries. The cards are as thick and as durable as your standard playing card.

Thinkocrats: Country Comps can be played in two different ways. The first is summarized here. The second is any way in which the game’s owner decides. We provide a few suggestions in the Game Variants section of this review. Regardless of the game played, the goal is always the same: learn something new.

To set up the game per the rules provided, first shuffle the 52 Country cards and then evenly distribute the cards among the players. Players should pick up their cards and keep them hidden from their opponent until played.

If you think it’s helpful, you might want to have some means to keep track of scores if multiple games are played.

Thinkocrats: Country Comps is all about comparing one country against another. This is done by comparing different stats. Each Country card contains identical information categories. 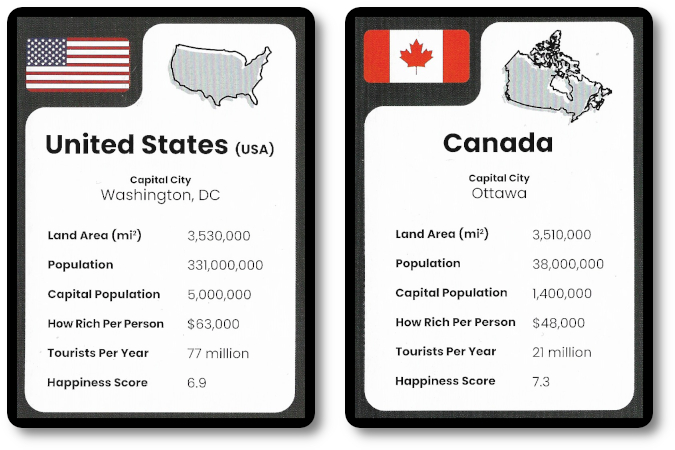 While much of the information displayed on the cards are self-explanatory, a few important facts require a bit more explanation.

It’s also worth noting that all the number values provided on the Country cards are purposely rounded to make it easier for the players to use.

The game is played with one player selecting one of the six facts to be compared. Then all players select one card from their hand and place it face-down. Once all players have placed a card, they are revealed simultaneously and compared. The player who played the card with the highest value of the identified fact wins all the cards, placing them in a pile off to one side. The player who won the cards now selects a new fact and the game continues until all the cards are won.

The game continues as described above until one player has all the cards.

The game comes with rules to play a War variant, allowing players to learn about the different countries using an interactive method of educating them. This is a great approach, but not the only one. Players are welcome to define their own victory conditions, which will reduce or increase the length of the game. Players are also encouraged to create their own rules around the cards, creating new games.

The Child Geeks didn’t care much for the game but did enjoy all the facts on the cards. According to one Child Geek, “When you play the game, it’s just like playing War, which isn’t that interesting. But learning all about the different countries and comparing them is pretty neat.” According to another Child Geek, “I think the real winners of the game is anyone who takes the time to read the cards. I learned just by reading them.” When all the games were over, the Child Geeks didn’t think the gameplay of Thinkocrats was all that interest, but they did find the information the cards contained very intriguing. Based on their interest in what the cards provided, they agreed to give the game their full approval.

The Parent Geeks, who during this time of COVID and restricted activities, are eager to find any means necessary to get their kids’ faces out of their electronic devices. They found Thinkocrats: Country Comps to be an ideal method to get their children to look up – be it even for just a few brief moments – to engage in conversations other than how poor the bandwidth was in the home. According to one Parent Geek, “I like this game because its approach to teaching facts is both easy to present and easy to learn. Not the numbers or values, but just learning that one country is bigger than the other, has more tourists, and what their flag looks like. Felt great to see my kids take an interest.” Another Parent Geek said, “A great little game to keep in the car glove box or a travel bag. You can take it out anywhere and use it to have a conversation, get people to think, and learn something along the way.” All the Parent Geeks gave the game their full approval.

The Gamer Geeks appreciated what the game was about but always focus on the gameplay itself. They are, after all, elitist. According to one Gamer Geek, “The intent of the cards is lost in the absurdity of the gameplay. It’s like making a game out of flashcards. Yes, you can, but a great game it does not make. Full marks for teaching players about different countries, but the game in which it is being taught is nonsense.” Another Gamer Geek said, “Reminds me of a few games my parents had in the car when I was a kid and another game names Top Trumps. I don’t remember the game being interesting, but I do remember spending countless hours looking through the cards and the facts while we traveled across the country. Good memories, but I don’t think this is a game for gamers.” The Gamer Geeks rejected Thinkocrats: Country Comps, but did acknowledge its value as a teaching tool.

Thinkocrats: Country Comps reminded me too of older card games that my parents purchased for us as little gifts. I remember them being from National Geographic and other educational foundations. On the cards were facts about dinosaurs, countries, planets, sea life, and mammals. Each deck was themed and contained a great deal of information. Exciting stuff as a kid, but I never once thought there was a game to be won. The idea of the cards was always – in my mind – a means to quickly summarize essential and interesting information.

This game didn’t change my mind, but there is value in providing the holder of the deck of cards a means to explore further the information it contains beyond just reading the card’s contents. On that point, the game does a great job of providing a simple way of engaging the individual. Even more so when you consider that the game’s rules allow adults and children to play the game on a level playing field. That is to say, a person with an advanced degree doesn’t have an advantage over a player who just graduated the third grade (although, I think we all know which of the two is better at macaroni art).

The real value of Thinkocrats: Country Comps in my mind is its method of teaching. It isn’t heavy-handed or overly complicated in its approach. Just facts simply stated and easy to read. For those with a curious mind and always eager to learn something new, the cards will serve as an entertaining distraction. For everyone else, I think – at best – Thinkocrats: Country Comps will be a card game that gets to live in the kids’ game collection or at the family cabin. Give it a go and see if its value is worth learning from.