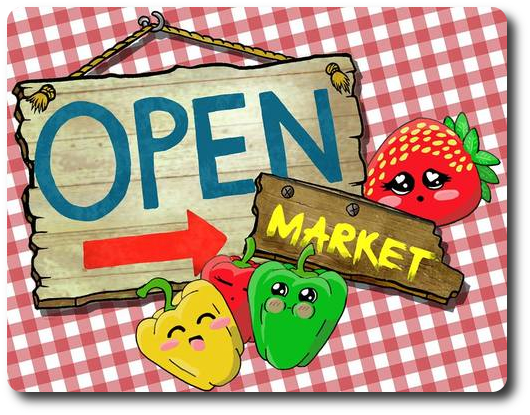 Owning a restaurant is tough. It means long hours, busy days, and very little downtime. It’s also expensive and can lead to financial ruin if you don’t watch your expenses. As an owner of a small popular restaurant, you buy fresh ingredients every day. What you buy is as important as when you buy, since a profit can be made by those who are savvy enough to watch the market.

Getting Ready to Shop

To set up the game, first give each player 1 Player mat, returning any unused Player mats to the game box.

Second, place the Market mats in the middle of the game playing area. Place 1 Food wink on each food image on the Market mats. The color to be used will match the tablecloth in the background.

Third, give each player 5 Copper tokens and 1 Silver token. Place the rest of the money tokens off to one side of the game playing area. I suggest you assign 1 player as the “Banker” to help make change and collect money tokens.

Fourth, shuffle the Order cards and deal 5 to each player, face-down. Place the remaining Order cards face-down to one side of the game playing area.

Fifth, each player looks at their dealt cards, selects 1 (placing it face-down), and passes the remaining cards to the player on their left. This is repeated until players have drafted 5 Order cards.

Sixth, place the Turn Order mat by the Banker (or pool of money tokens) and place the Chicken Leg token on the “1” space.

That’s it for game set up. Let’s go get some groceries!

If this is the first round of game play, the players only get 1 action. All players will have 2 actions during subsequent rounds. In turn order sequence, each player identifies which action they are taking and completes it. The Possible actions are as follows

Purchase 1 Food wink by paying for its current cost. The Food wink is placed on the player’s Player mat on the number value that corresponds to the value they paid. 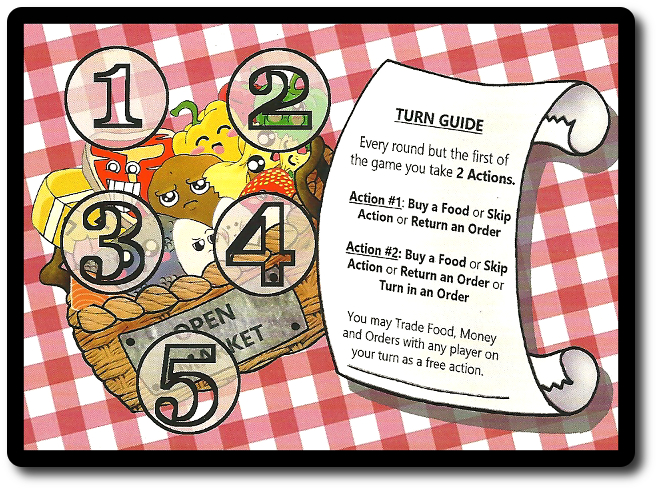 The cost of the Food wink will depend on how many Food winks are left. That is, the less Food winks on a Market mat, the more expensive they will be. Money tokens are returned to the Banker. 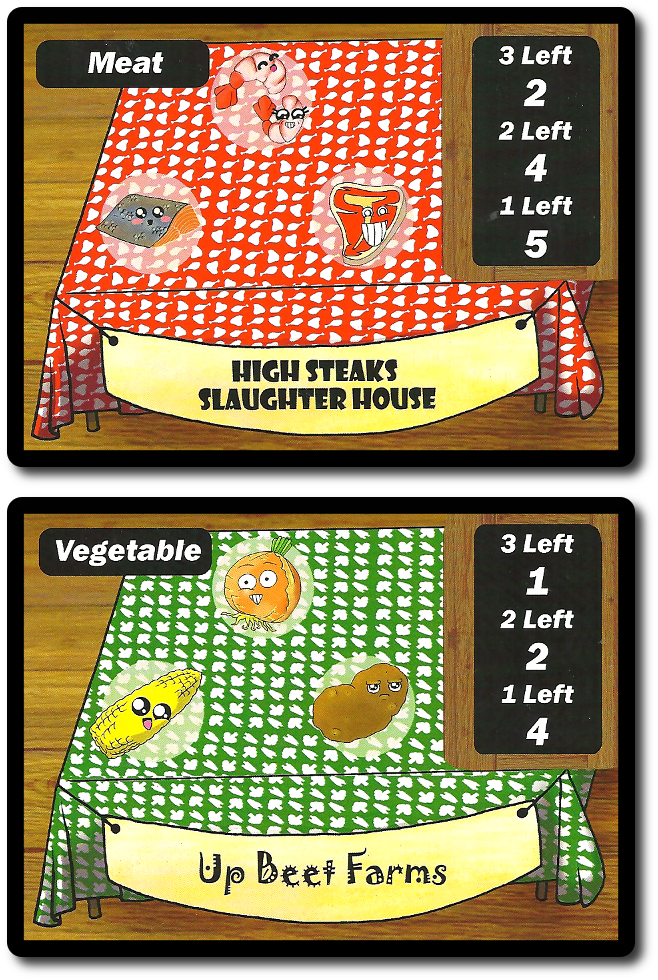 This action allows the player to return 1 Order card they own to the bottom of the Order card deck and draw a new one to replace it.

This action allows the player to not take any action (which, ironically, is an action in and of itself). Doing so awards the player 1 Copper token from the Banker. 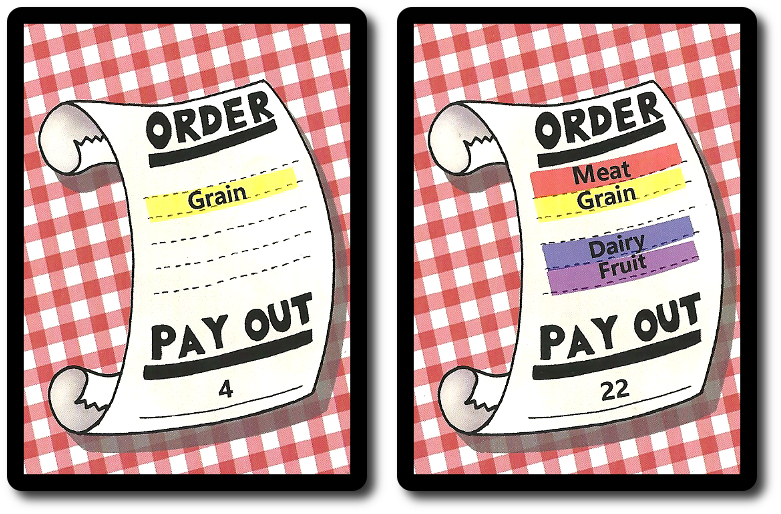 The more difficult the Order card is to complete, the more points it will be worth

Step 2: Ending the Turn and Round

The player’s turn is now over. They should continue to watch the market closely, don’t waste their collected Food tokens, and consider at all times how much money they have.

When all the players have completed their turn, the game round is over. The Chicken Leg token is advanced to the next round number.

After the last turn is taken during the final round (as defined by the players before the game began), the game comes to an end. Players now count the value of the money they still have. This is the player’s victory points. The player who turned in the most Order cards (not the ones with the highest Pay Out values) gets 1 Silver token. The player with the second most Order cards turned in gets 3 Copper tokens.

The player who has the most money wins the game.

The Child Geeks enjoyed themselves, buying Food winks, laughing when they made the market move, and sighing in despair when they were forced to purchase Food at 3 times their original cost. There wasn’t as much trading as I thought there would be, with the Child Geeks keeping their eyes mostly on their own Order cards and purchased goods. Good timing on their part was demonstrated often with Child Geeks completing Order cards as swiftly as possible and purchasing Food winks when the price seemed more or less appropriate. Not all players followed this path. Some purchased the Food winks when they needed them (price be damned) and even skipped their turns to collect money tokens. According to one Child Geek, “This game gives you a lot to do and all of it helps. The trick is knowing what to do.” Another Child Geek said, “I can’t believe I spent that much money on a potato.” Believe it, young lady! All the Child Geeks voted to approve the game. 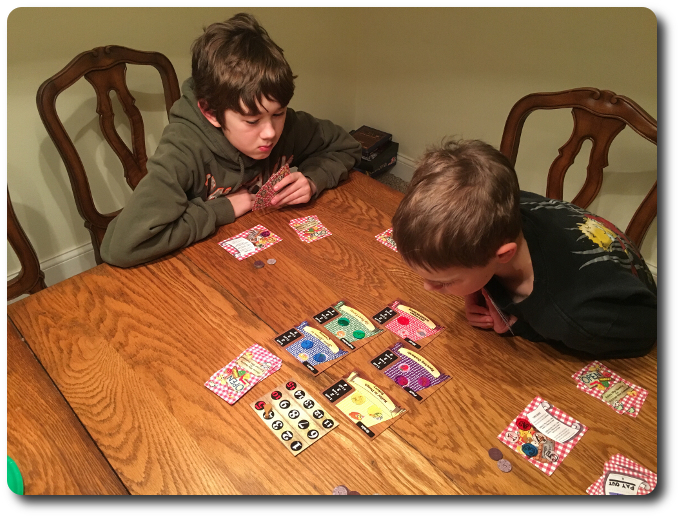 The Parent Geeks found Open Market to be slightly more involved than they thought, mentally speaking, but still casual. The way the market dipped and moved made total sense and the Parent Geeks used it to their advantage. Trading was frequently suggested, but seldom accepted. The trades that were accepted mostly focused on Food winks and money tokens trading hands. According to one Parent Geek, “An easy little game to play, but not at all easy to win. I’m enjoying it.” Another Parent Geek said, “This is perfect for my family. It has everything I want in a game about economics that my kids will understand.” Within their peer group, the Parent Geeks voted to approve the game. They also highly recommended it for families.

The Gamer Geeks liked what the game was about, but not how it went about it. According to one Gamer Geek, “Maybe I’m just not getting the point of the game, but I don’t really feel like I’m competing in a market. I feel like I’m competing against other shoppers.” Which is to say, the Gamer Geek didn’t feel he had enough pull with the market or enough direct contact. For example, the Gamer Geeks wanted the ability to sell Food winks back if they didn’t need them. Another Gamer Geek said, “I give this game five stars for families, but not for us. It’s too simple and too straight forward, with not enough meaningful actions to take real advantage of the market.” In the end, the Gamer Geeks found Open Market to be too simple of a market game to be of interest to them, rejecting it as a result.

Open Market is a great example of a game that can be used to introduce a number of complex economical concepts in a fun and easy to understand way. For example, supply and demand is constantly at work in the game. The use of the Player mat allows the player to keep track of how much they paid for a Food wink and overall net gain if they were to use it or sell it. Monopolies can quickly be created when a player owns all the Food winks of a certain type and an oligopoly soon follows when two or more players do the same thing. For a game with cute images of food, it’s rather cut throat.

But not to a point where the game play is actually that hard. Players can always make money to participate and no one is ever out of the running. There were a number of times where I thought the game would have a runaway winner, but the demands of the Order cards and the fluctuating market kept that in check. Winners won by a handful of points when evenly matched, but everyone always had enough points to hold their heads up high in the end.

Those who can quickly evaluate the demands on the market and the current supply will always do better than those who do not. I was surprised that the Gamer Geeks did not at least return a mixed approval on this point alone. The game is challenging, but it also telegraphs a great deal to the player who knows where to look. All the Gamer Geeks did and this resulted in a playing experience that did not challenge them in the way they liked. If you were the last player and you knew exactly what needed to happen, you didn’t have any say until it was your turn. This, among other things, didn’t please the gaming elitists one bit.

While I agree with the Gamer Geeks that Open Market is nowhere close to a perfect market and economics game, it’s not bad either. The designer has balanced depth of play with ease of play by mixing and matching different difficult economic concepts, presenting them in an easy to follow formula. As a result, the game feels a big formulaic at times and falls short of allowing complete market freedom, but the player is never on rails and always has choices. In short, it’s a great game to put in front of new, young, and unskilled players to introduce the basic concept of economics in a way that is fun, engaging, and educational.

If you like the lighter side of economics, where wheeling and dealing is as simple as timing, and the price of victory is dependent on the demand, then do play Open Market. I would recommend it for Child Geeks, Parent Geeks, families, and even the classroom. Heck, Gamer Geeks can even enjoy the game is they played it and kept their expectations at a reasonable level. Not that Gamer Geeks are reasonable, mind you…