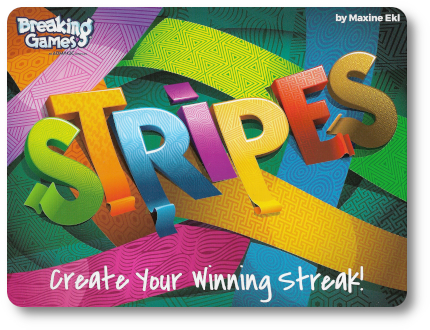 Spanish painter, sculptor, printmaker, ceramicist, and theatre designer, Pablo Picasso, said, “Why do two colors, put one next to the other, sing? Can one really explain this? No. Just as one can never learn how to paint.” In this game, players will be shifting the position of colored stripes, making patterns. The complexity of the game is not the matching of the colors, but the proper arrangement and timing of the alignment. In the act of doing so, the players bring forth color harmony.

Stripes, designed by Maxine Ekl and published by Breaking Games, is comprised of 60 Stripe cards, seven Action tiles, one Starting Player token, and 12 Reference cards. The cards are as thick and as durable as your standard playing card. The token and tiles are made of thick cardboard. The artwork for the game is exceptionally minimal. Cards have a series of striped colors only. For those who have difficulty identifying colors, each of the unique color stripes has a pattern, making it easier to distinguish the color differences.

To set up the game, first give each player a blue and red Reference card set. These are used to help align the stripes on the Stripe cards. Any Reference cards not used should be placed back in the game box.

Second, shuffle the Stripe cards and deal seven to each player (or six cards if playing with five or six players), face-up in a row. The alignment of the cards is determined by using the small dot found at the bottom of each Stripe card. Ensure that the dot is closest to the player the Stripe cards are being dealt to. Once the Stripe cards are dealt, the player places the Reference cards at the far left and far right of their row. This full row of cards is referred to as the player’s “Tableau.” Place the remaining Stripe cards face-down in the middle of the playing area. This is the draw deck for the duration of the game.

That’s it for a game set up. Determine who will be the first player and give them the Starting Player token.

Stripes is played in rounds and turns with no set number of rounds per game. On the player’s turn, they select one of the face-up Actions tiles and complete the action the tile indicates.

This starting position of all the cards when the game is first set up is referred to as the “default position” and is further reinforced by one of the two Reference cards. The following example image shows a minimal version of a player’s row. 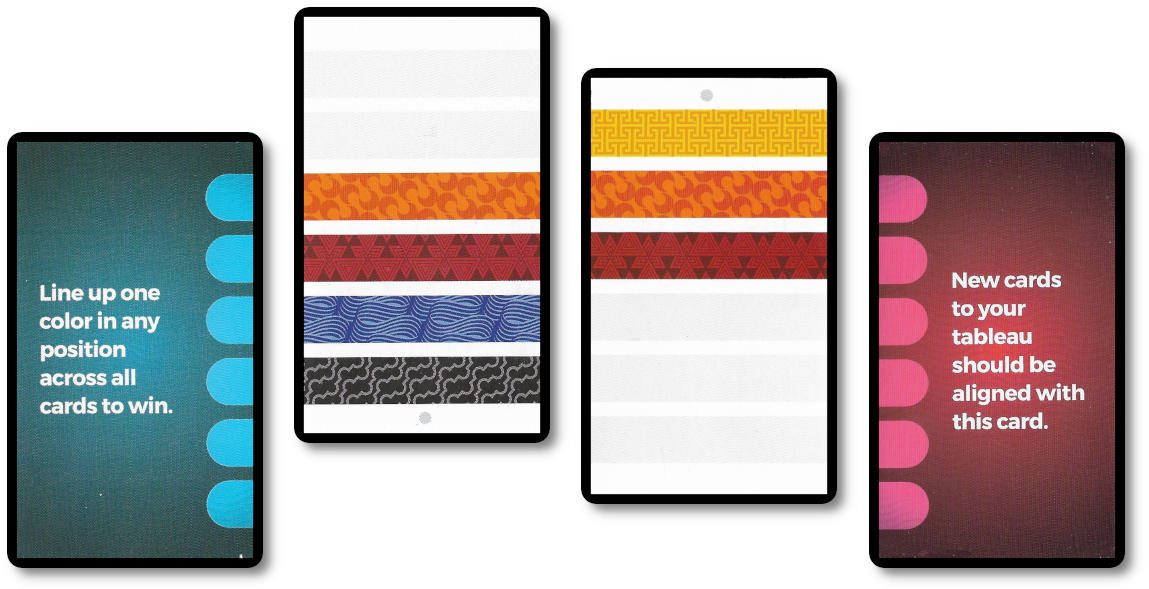 The available actions are as follows:

Once the action is completed, the player’s turn is over for the round. The next player in the turn order sequence now takes their turn, selecting any of the remaining face-up Action tiles available.

End of the Line

The round continues until all players have selected one Action tile and completed the action it indicates. The round is then over. The Starting Player token is passed to the next player in the turn order sequence, and all the Action tiles are placed face-up.

A new round now begins with the player in possession of the Starting Player token selecting the first Action tile.

The game continues as described above, with each player selecting an action per round and the round coming to an end once all players have completed a single action in turn order sequence.

The game comes to a close when any player completes at least one continuous striped line of the same color between the two Reference cards using all the cards in their Tableau. The first player to do so wins the game.

To learn more about Stripes, visit the game’s web page.

The Child Geeks had a lot of fun with this game, finding it visually appealing and tactically fulfilling when shifting the cards around. According to one Child Geek, “I really like the game. It looks simple but starts to feel like one of those sliding tile puzzles. You have to be careful what you shift, and each card takes a whole turn to move.” Another Child Geek said, “A game that is both a puzzle and a game. I think you could play this alone as just a simple puzzle, but playing against others makes it feel exciting and a little stressful.” When all the games were over, the Child Geeks took a vote and found that Stripes did everything right to bring a smile to their collective faces.

The Parent Geeks were also agreeable to the game, finding it to be a fun, casual, engaging game that allowed for an equal amount of gameplay and conversation without disruption. According to one Parent Geek, “A great game to play with the family. The biggest challenge for me was to determine what action I needed to take as all the actions always seem like really great ideas.” Another Parent Geek said, “Visually appealing and a fun exercise of matching colors to an ever-shifting line of patterns. A simple enough approach, but I found the game wonderfully complex. A real thinker and great stuff. I would highly recommend it.” When the last games were played and the cards put aside, the Parent Geeks voted and fully approved Stripes for their family and friends.

The Gamer Geeks liked the game’s approach and its gameplay but were split when it came to their endorsement. According to one Gamer Geek, “I think this is an excellent example of an abstract puzzle game that is easily taught and difficult to win. What I was afraid of would be the repetitive nature of the game, but the limited actions and shifting player position make each turn into a real treat to play. I enjoyed it and would recommend it as a casual game to my elitist gaming buddies.” Another Gamer Geek said, “A good game that is essentially all about color-matching and shifting cards around. I get that it can be difficult, but I felt bored. While the actions you can take are not always available, none of the actions are bad. There is always something to tinker with, and I think that is what turned me off. I never felt like I was gaining any moment. I was just going through the motions until someone won.” When the last vote was counted, the Gamer Geeks gave Stripes a mixed endorsement.

Stripes is a solid abstract strategy game with enough depth of play to keep the gaming elitists happy and straightforward enough to allow our youngest players to join the fun. At its heart, the game is all about pattern matching using vertical and horizontal alignment. That is in and of itself not difficult. I should also point out that if that was all there was to the game, it wouldn’t be much of a review. The real effort in the game comes from making micro moves by thinking several steps ahead, which is necessary if you are to succeed. Add to it the level of complexity that comes with selecting the best possible action per its availability and the ability to mess with your opponent, and you have a game that is not easy to win.

There was some controversy regarding the player’s ability to mess with an opponent’s Tableau. The original idea was that doing so would disrupt the game too much and make it unplayable. The argument went something like this:

“If I can rearrange an opponent’s card positions at any time, I can make sure they never win.”

Nothing in that statement is true, however. First, you cannot rearrange an opponent’s Tableau anytime you like. The action must be available to the player on their turn. Given that a player can only select one action per turn, it makes little sense to waste it on just messing with an opponent’s single card position. Second, taking action against an opponent has an equal action on the player’s Tableau. It’s very much a 1:1 transition. To put it another way, you can never “screw” with another opponent because doing so would “screw” with you, too. In this way, the game is perfectly balanced.

I very much enjoyed the game. I felt very involved from the start and became engrossed in the small but essential changes I made to my row of cards. Paying attention to your opponent is necessary, but you’ll be spending most of your time just concerned with your Tableau. Since everyone starts with the same number of random cards, it stands to reason that everyone begins in the same position, but this is not true. Some players will have fewer choices to make to complete their line based on the random card distribution. This makes Stripes very similar to a race, but one in which everyone is working on their track having started in different positions. The same finish line, but a different journey to it. Great stuff.

Do try Stripes when time permits. It’s engaging, fulfilling, and, best of all, challenging. Put it on your family game table and see if it doesn’t align with your gaming interests.