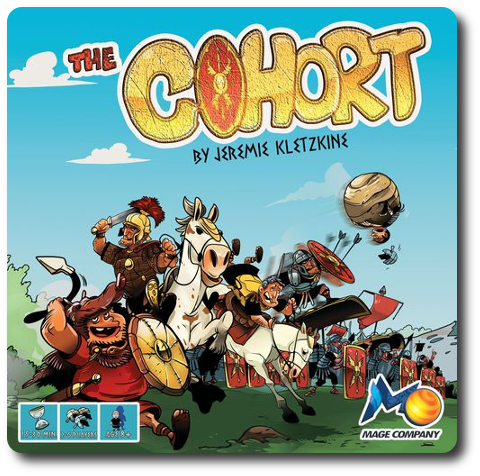 Australian moral philosopher, Peter Singer, said “Ancient recipients of instant news probably couldn’t do very much about it, for instance. Xerxes would still need three months to get his army together, and he might not get home for years.” In this game, each player will be putting together a Roman Legion as quickly as possible and on very short notice. Shortcuts will be necessary, which means that complications will arise. Building an army is a lot more difficult than leading one into battle!

The Cohort, designed by Jeremie Kletzkine and published by MAGE Company, is comprised of 168 cards. The cards are as thick and as durable as your standard playing card. Artist Loïc Billiau has provided colorful images to help represent the different soldiers the players will be using in the game, adding a bit of humor to each with exaggerated body features.

To set up the game, first shuffle all the cards together and place the deck face-down in the middle of the playing area. This is the draw deck for the duration of the game.

That’s it for game set up. Pick a starting player and begin!

The Cohort is played in turns with no set number of turns per game. On a player’s turn, they will (by default) draw the top two cards from the draw deck. The player must now decide which of the two cards they want to keep (adding it to their hand) and what card to give to any other opponent of their choice (face-down). These basic actions will change as the game progresses.

The player may now, optionally, play one card from their hand to their “Cohort”. A Cohort is comprised of several cards of the same unit type, of which there are a total of seven. These are Praetorians, Catapults, Centurions, Sagittariis, Equiteses, Legionaries, and Veliteses. Each unit card has a number value on the card’s face upper-right corner. This number indicates how many of that unit must be in the pile before the Cohort is completed.

For example, it will take four Sagitarries to create a Cohort, but only three Centurions. Units cannot be mixed, meaning each Cohort is only ever comprised of a single unit type. In addition, there can only be one Cohort of each type in the player’s Legion (the game name for all the different piles of Cohort cards in front of the player comprised of different unit types). 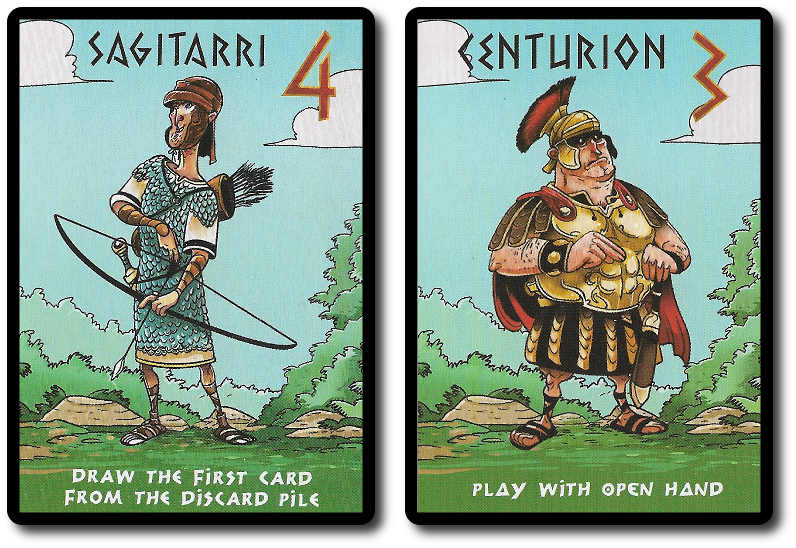 After the player has placed cards into play, they finish their turn by discarding down to four cards in their hand. Cards are discarded face-up to a discard pile next to the draw deck. This completes the player’s turn. The next player in turn order sequence now goes.

If this game was only about was creating piles of specific sets, I doubt very much I’d be reviewing it. The game wouldn’t be of much interest. Each card, once put into play, provides the player with a special negative effect. These effects are considered “active” until the game ends or the player completes a Cohort. Multiple versions of the same card do not change the effect listed.

Players can, if they so choose, start building more than three Cohorts in front of them, although only three is necessary to win. Because unit cards cannot be mixed with different unit cards, a new unit type creates a new pile. This means a player can start to weigh themselves down with multiple negative effects. It’s only when a pile is complete (by having the correct number of unit cards) that it no longer provides its effect. This is signified by the player taking the pile and flipping it face-down. This Cohort pile counts towards the player’s necessary number to win, but no longer provides any effects in the game. The player can, if they like, create a new Cohort pile using the unit type they just completed.

The different unit cards provide the following effects when put into play.

Primus Pilus is the most senior centurion in a Roman Legion. They are a special unit type and cannot be collected as a Cohort. Rather, they are added to existing Cohorts (yes, this breaks the rule about a Cohort only being comprised of a single unit type). If a player wants to bring it into play, they have two options. They can either add it to an existing Cohort pile as a “joker” (adding to the total number of unit cards needed to complete the Cohort) and then distribute the rest of their hand to opponents as they see fit or discard Primus Pilus and then target one card in play by an opponent, forcing it to also be discarded. 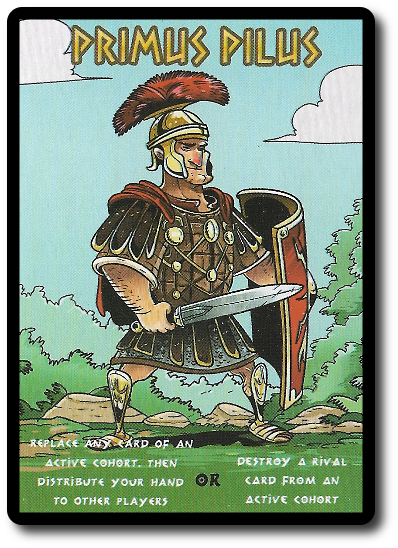 Players can also build a combo by having the Cohorts of Sagittariis and Catapults in play. If they do, they draw one card from the draw deck and one card from the discard pile, but the player does not look at them. The player then gives one of the two cards to an opponent of their choice, keeping the other. 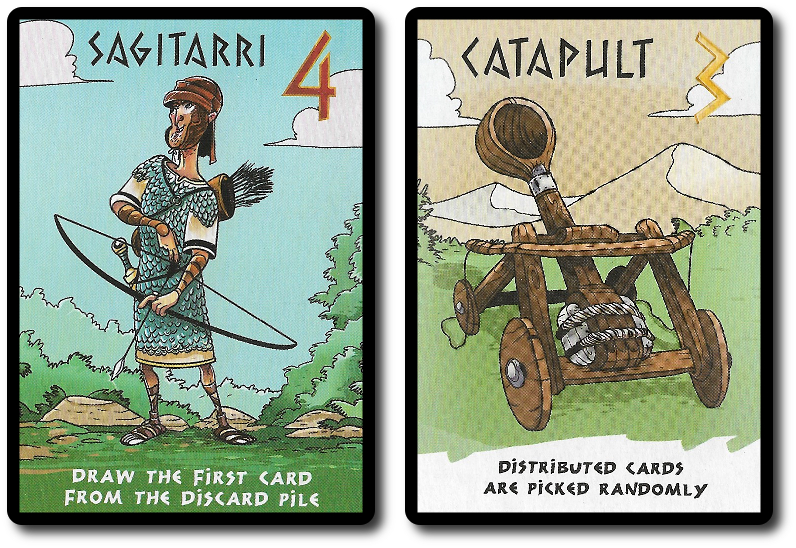 The game ends as soon as any player completes their third Cohort pile with the required number of cards of that specific unit type. This player’s Legion is now ready to battle for Rome and bring honor to Caesar!

To learn more about The Cohort, visit the game’s web page.

The Child Geeks enjoyed the game, finding the game play to be easy to grasp and the subtle twists in the game rules to be entertaining. According to one Child Geek, “What I like most about the game is that players get to decide what bad things happen to them.” By “bad”, the Child Geek is referring to the negative effects caused by the cards. But here’s the thing. Those so called “negatives” were not seen as such by the majority of the Child Geeks. As one Child Geek put it, “The effects of the cards just change the rules. They don’t make the game any harder. They just make the game more fun.” When all the armies were built and sent off to some unknown battlefield, the Child Geeks took a vote and all decided to approve The Cohort.

The Parent Geeks found the game to be both entertaining with their families and with their peers. The casual and less experienced gamer Parent Geeks were the most vocal. According to one such Parent Geek, “Great game! I like how the rules change for players as they play cards. If you are looking for a shortcut, there is a price to pay.” The more experienced Parent Geeks, while they enjoyed the game, didn’t find it to be as praiseworthy. According to one of these Parent Geeks, “I was entertained, but I never felt like I was at the game’s mercy or any of my choices on what cards to collect really did me any good or any harm. You should always go after the cards with the lowest value. Always. That strategy seemed to be the winner each and every game.” The Parent Geeks took a vote and decided, despite some of them hoping for a card game with a bit more depth, they all enjoyed it.

The Gamer Geeks weren’t that impressed. According to one Gamer Geek, “The game has real promise, but never delivered. I like how the cards you collect change the rules of the game, but never in a way that made me feel like my choices had serious consequences. The only thing you need to watch out for is who is collecting what as there are only so many cards in the game.” Another Gamer Geek said, “The game is way to random and luck driven. I don’t know why I wouldn’t always play cards in front of me. The consequences for doing so only create silly rules that the players have to slog through without having any meaningful disadvantage or advantage.” The Gamer Geeks did enjoy the game with their kids, finding The Cohort to be “loads better than other kids’ games”, but none of them really saw The Cohort as a game for kids. It just happened to be the most entertaining with them. Which lead the gaming elitists to decide that this card game was not for them.

The Cohort is a fun family and mixed group game, but as the Gamer Geeks said, it lacks the depth to be of much fun for the gaming elitists. To several player’s points, the “negative effects” caused by the cards are not really painful, nor do they give the player a serious disadvantage. In many respects, the more units you have in play, the easier the game becomes. When players begin, they have to make some decisions in a vacuum. Which card should they keep that will help them win the game? No clue. Which card should the player give to an opponent that won’t cause them to lose the game? Again, no idea. It’s only as the game progresses that it becomes clear what cards you should not give to an opponent and what cards to play. But by that time, the rules of the game have changed.

Which is pretty interesting when you play the game, but didn’t leave some of our players with a feeling of accomplishment or risk. In truth, I got the impression that some of our players were simply going through the motions, not really putting a lot of thought into what they were doing. Which worked just fine and is a big alarm bell for those who are looking for a game where they need to really think about their goals and approach to winning (i.e. “strategy and tactics”).

What we have here is a light card game that gives the players something to think about, but it doesn’t challenge them to think very hard about it. The game is by no means a sleeper, but nor is it something you will find yourself burning brain cells over. It’s very casual and breezy, preferring to twist the game rules slightly to adjust the approach, but never blocking the path. This was perfect for the Child Geeks and the more casual players. If you are either, do give this game a try.