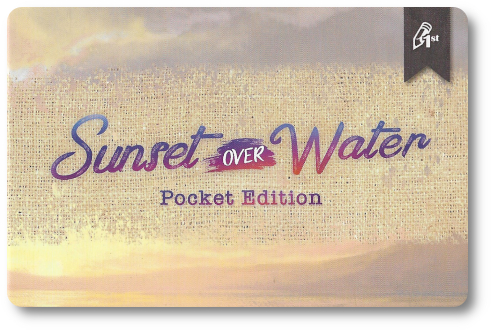 Pencil First Games, known for designing and producing games focused on casual gameplay that promotes fun, relaxation, and engagement, have released a new “pocket edition” of their game Sunset Over Water. A game where players are challenged to travel off the beaten path to find breathtaking and inspiring views to paint.

For those of you not familiar with “pocket” games, they are designed to – you guessed it- fit in your pocket. Seldom do they fit in your pants pocket, but I should state that nowhere does it suggest that you put this game in your back pocket of your favorite stonewashed Levi’s (whoops, I just dated myself).

Instead, pocket games provide all the fun of the standard-size game but require less shelf space and game table real estate. And that is true here when it comes to Sunset Over Water: Pocket Edition. It contains all the elements of its bigger version, just smaller, without losing the quality of the game itself.

Of particular note is that the pocket edition of the game also includes the Nature’s Muse mini-expansion that introduces secret objectives for each player that is scored at the end of the game. In an exciting twist, the points scored from the personal objective go to the player who has acquired the most paintings of the type noted on the card. This introduces additional scoring that each player will know a little about and provide an exciting twist at the end of the game that might give one player just enough to sneak ahead and win big.

We played the “pocket edition” and found it just as enjoyable as its big brother. More so, to some degree, as the game’s footprint is half the size of the original. A nice touch was the meeples, which are also reduced in size but still just as detailed.

Pencil First Games continues to release beautiful games! Not once have we ever placed one of their titles on our table and not walked away feeling satisfied and excited to play the game again. This new pocket edition ensures we can take the fun of the game wherever we go, regardless of whether we are wearing name-brand jeans from the early 1990s. As if I could fit into them anymore…

To learn more about this game, visit the game’s web page.

To learn more about how the full-sized game is played, look at our Sunset Over Water Game Review. It’s pretty awesome.