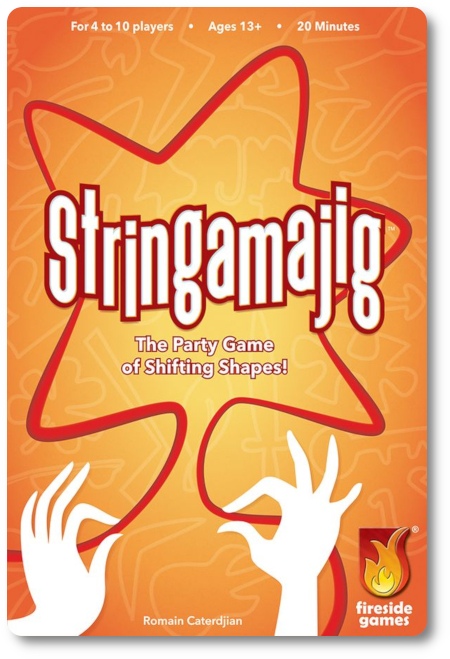 French fashion designer best known for his signature high-heeled stiletto shoes, Christian Louboutin, said, “I am very bad at drawing. Seriously. I can draw shoes. That’s about it.” Drawing is an art form and a talent a few have made into a career. Not to toot my own horn, but I have drawn a damn good stick-person (which no one is willing to pay for). In this game, your artistic skill – present or not – will be tested as you attempt to use a bit of uncooperative string to illustrate a simple word. This is a game full of creativity and hilarity. An artist you need not be, but you best bring your patience.

Stringamajig, designed by Romain Caterdjian and published by Fireside Games, is comprised of one loop of string, 140 Word cards, four blank cards (for your personal use), one score pad, one pencil, and one 60-second sand timer. The cards are as thick and as durable as your standard playing card, and the “string” is more of a “cord.” Excellent game quality.

To set up the game, first shuffle the Word cards.

And you are done!

Determine who the first player is and give them the string and the Word card deck. You might also want to assign one person to be the timer (giving them the sand timer) and another player as the official “scorekeeper” (giving them the score pad and pencil).

Stringamajig is played in turns with a set number of turns per player per game. A player’s turn is summarized here.

The player now looks at the top-most Word card still on the draw deck. The numbers shown on the Word card’s back identify which words on the card the player drew must be used. For example, the top-most Word card in the draw deck shows the numbers “3” and “4”, this means the player can only use the “3” and “4” words on their drawn Word card. If the word has an icon, this means it’s a “Challenge Word” and comes with additional rules. 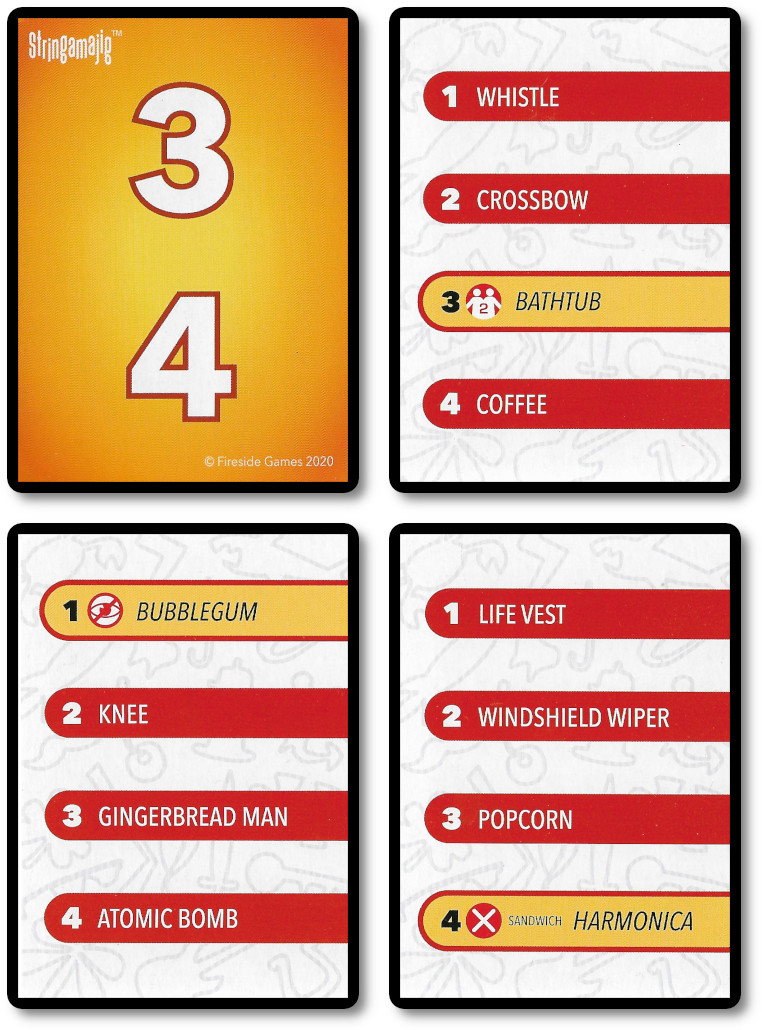 Time to get drawing! The player says “start,” and the player with the sand timer starts the clock! However, if the player selected a Challenge Word, the player must first announce what the challenge is (not the word, obviously) before the time starts.

One “draws” in this game by taking the loop of string, placing it on the table (unless they took the two-player Challenge Word that requires the player to work with a partner) and then crafts the string, moving it around on the table, to create an image that represents the word they selected. The string must be the centerpiece of the exercise, meaning the player cannot act out the word without the use of the string as a significant component of the act itself. Players cannot speak during their turn, but they can manipulate the string however they like as long as it does not leave the table (or the floor if that is needed – again with the noted exception of the two-player Challenge Word). Additionally, the player cannot use other objects, make any noises (already mentioned that and worth repeating), draw letters, draw numbers, draw words, or use sign-language.

All the other players in the game are now trying to guess the word the player with the string is desperately (and hilariously) trying to represent. This is done by simply shouting out the word the players’ think is being represented. If a player guesses the word correctly, they are handed the Word card, and the player with the string draws a new Word card, continuing to do so until their time runs out. A player can, if they so like, skip a card if they don’t find one they like (the time, however, does not stop while they ponder).

This completes the player’s turn. The string and the deck of Word cards are passed to the next player in the turn order sequence.

When the game ends, the points are reviewed. The player with the most points wins the game!

If playing with younger players, feel free to make all Challenge Words just ordinary words. Ignore the challenge indicated, but the word should still be used. Challenge Words are not inherently more difficult than other words. They just have additional rules. Forget these rules to give your younger players more opportunities to be creative without emotional turmoil.

Players can also decide to entirely ignore the restrictions placed on the Word card that indicates which words can be used. In which case, the player just scans the Word card they drew and selects the word they want to draw (using the Challenge Word rules or not). We used this rule for pretty much all our games, and it makes for a better experience. Artificial limitations imposed by the random undrawn Word card are an unnecessary component, in my opinion.

Finally, if the 60-second time limit is simply to fast, use your phone or another timer that gives players more time with the string. More time means more opportunity for players to score points and doesn’t increase the game’s length to a point where it feels like it’s dragging.

To learn more about Stringamajig, visit the game’s webpage.

The Child Geeks had a great time, finding the game to be always fun, but some of the words impossible to draw. According to one Child Geek, “I think the game is funny, but that string doesn’t always do what I want it to do.” Another Child Geek said, “It can be frustrating when others don’t see what you think is super easy to understand, but that’s part of the game. You just have to keep moving the string around until they get it and be sure to interact with your string, or you are going to lose!” Well said! Drawing with the string is the most important aspect of the game, but it isn’t the only step on the road to victory. When all the games were over, and the string was put away, the Child Geeks gave Stringamajig their full approval.

The Parent Geeks found the game to be a lot of fun with their family. As of this review, all my groups are practicing social distancing, meaning the Parent Geeks didn’t have a large peer group to enjoy the game with. Just couples and their kids. That didn’t stop them from passing judgment, however. According to one Parent Geek, “A fun concept that can be as entertaining as it is frustrating. The damn string will simply not do what I want it to do.” Another Parent Geek said, “When you know the word you are like – oh, yeah, super obvious – but it can be tricky trying to make the word out of the string and even tougher to guess whatever that blob is supposed to be. Still, I had fun.” The Parent Geeks gave Stringamajig a mixed endorsement, finding the game’s concept to be fun, but the execution with the string to be a bit of a mess at times.

The Gamer Geeks found the game and its concept to be pretty funny and played it a few times. Like the Parent Geeks, their peer group interaction was limited. They were super crafty by creating duplicates of the string and using Zoom with their webcams. This worked out pretty well. With a mix of technology and several beers, the Gamer Geeks found Stringamajig to be entertaining, but for a minimal time. According to one Gamer Geek, “With the understanding that I am playing this game remotely when it was intended to be played with people less than six-feet apart, I can still say that this game is pretty much not my bag. I like the idea, but it didn’t hold my attention. Its saving grace was that the game isn’t that long. Which, as it turns out, made it pretty tolerable.” Another Gamer Geek said, “Neat idea and I am laughing that this is essentially a game with just a few cards and some string – I would think that to be an April Fools joke – but the game works. I could play this again and think it does a good job as a party game. Too bad there are no parties to be had right now.” DAMN YOU, COVID! When all the votes were in, the Gamer Geeks gave Stringamajig a mixed endorsement.

Let me first say that this game is not easy for those who get easily frustrated. The string is easy to use but doesn’t keep the shape you want. It tends to move in all the right and wrong ways in opposite directions when you are crafting your “obvious” drawing of whatever word you selected.

Case in point, when I was teaching the game, I provided the following example: 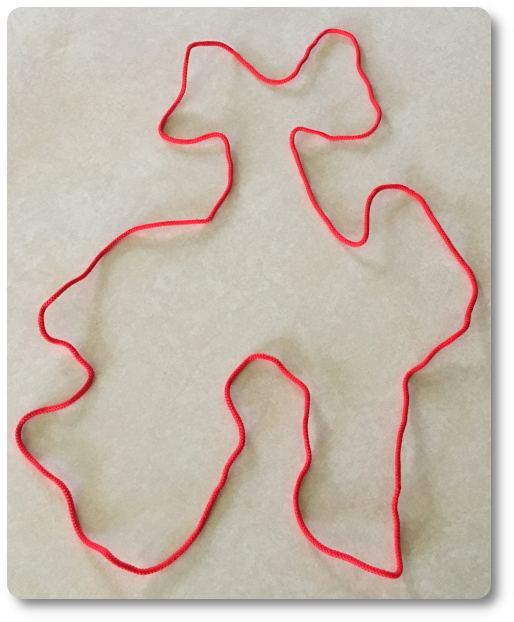 Do you know what that is supposed to be? A teddy bear. Clear as day, right? Hardly. But now that you know that it is meant to represent a teddy bear, it’s super obvious. Kind of. This is why acting is an important element of the game, but it must be focused on the drawing. I was able to get the players to guess my example when I pretended to pat it, kiss it, and then go to sleep with it next to me. I didn’t take a picture of that for “reasons.”

Party games are difficult to review at the moment, and I hesitated to put this on our list with all the needed social distancing and limitations of gatherings in place. Honestly, I am all for it and think we – as a society – are doing the right thing by limiting our interaction which is slowing the spread of the virus. Makes reviewing games damn hard, but this is not a challenge that cannot be overcome. Perhaps the strongest takeaway from this review is that this is a party game that still did well with our players despite not being able to be played in the manner in which it was designed. That says something. I’m not sure what, but it’s worth noting.

Our world will get back to a state of normalcy very soon. When it does, you’ll want to party like it was still 2019. When you do, Stringamajig will be a welcome addition to your table. You can work out all the pent-up frustrating and creativity on the string! Do give this game a try and see if a bit of string and a word makes for a good time with you and yours.