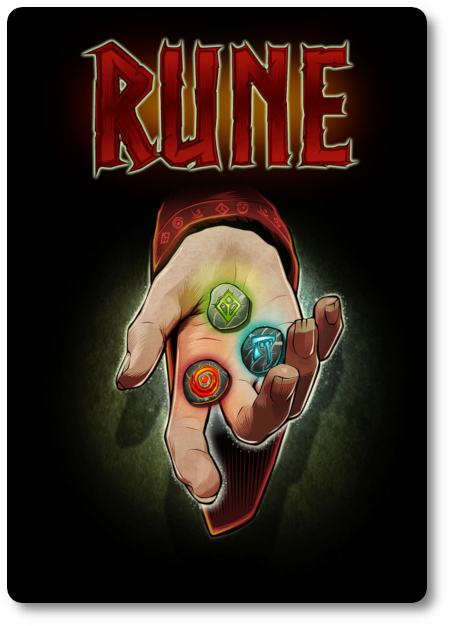 You are a mighty Grand Master of the Runes. You know their secrets and their power. With the help of your lesser Rune Masters, you collect and focus energy to summon a creature from another world to do your bidding. But there is treachery among your ranks. Another Grand Master assisting in the ritual is working against you. The ceremony will continue, but who the creature serves will not be known until the ritual is complete.

Rune, designed by Zemilio and published by Zemilio Entertainment, is comprised of one Starting card, 16 Rune cards, six Rune Master meeples (in two different colors, three per color), and two Rune tokens. The cards are slightly thicker than your standard playing card, the meeples are of the wood variety, and the tokens are thick cardboard — very sturdy game with an even sturdier box. Artwork by Tristam Rossin brings color to the cards that depict magically glowing rune stones.

Prepping for the Ritual

To set up the game, first place the Starting card in the middle of the two players.

Second, shuffle the Rune cards and deal three cards to each player, face-down. This is the player’s starting hand. They should look at their cards, but keep them hidden from their opponent until played. Set the deck of remaining cards face-down to one side of the game playing area to create the Rune card draw deck.

Third, have each player collect the three Rune Master meeples in the color of their choice.

Rune is played in turns with no set number of turns per game. A player’s turn is summarized here.

Step One: Play a Rune Card

The player must now select one Rune card from their hand and play it to the middle of the playing area. The Rune cards depict six different runes, dividing the Rune card into six different sections. When playing a Rune card, it must be orientated so the runes depicted on the card’s face overlays at least one or more Rune cards below it. When placing a Rune card, it can never completely overlay a previously placed Rune card, cannot be placed over a Rune Master meeple, and cannot connect areas of the same color currently controlled by your opponent’s Rune Masters.

Also, two rules must be followed when matching runes. 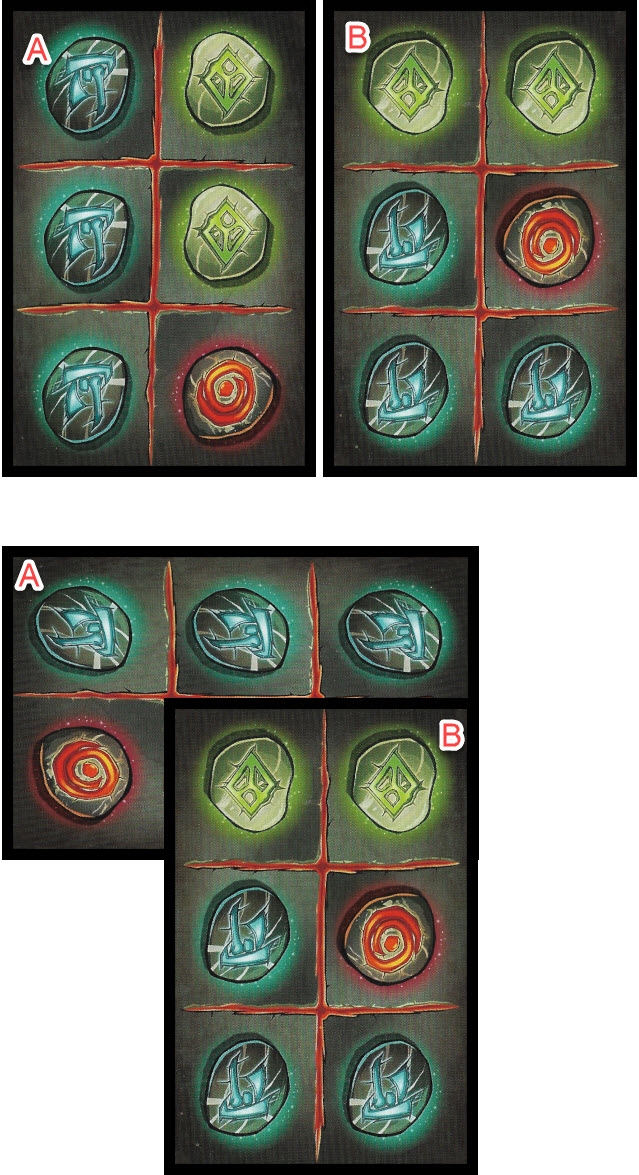 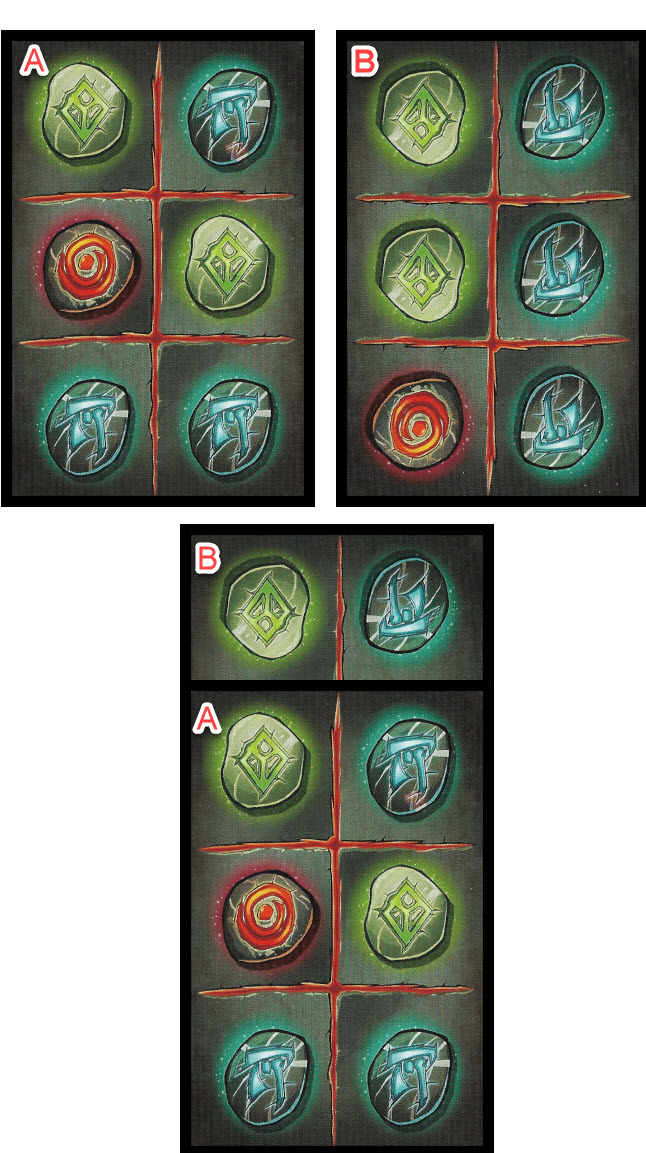 The player must now decide to either draw a card from the Rune card draw deck (adding it to their hand) or place one of their Rune Master meeples.

When placing a Rune Master, put it on top of a rune color that is currently not controlled by one of your opponent’s Rune Masters. A Rune Master “controls” the rune color it’s placed on top of and any adjacent runes of the same color and continues to be the same. Not “all the runes” of that color in the game. Only those that are connected and create a “chain” or runes.

This ends the player’s turn. Their opponent now takes their turn, starting with step one noted above.

And the Summoning is Complete!

When both players now have all their Rune Masters in play, points are scored.

The game comes with a mini-expansion titled “Grand Master”. When setting up the game, give each player one Rune token. These are used during the game when a player places a Rune Master meeple. If they so choose, they may place their Rune token, overlaying a rune depicted on the Rune card. Thus changing the rune to either Blue or Green. The set Rune token must be adjacent or diagonally to the placed Rune Master meeple. Set Rune tokens cannot be placed on top of Rune Masters, and Rune cards cannot be placed on top of Rune tokens. The endgame is the same, as is scoring points.

To learn more about Rune, visit the game’s web page.

The Child Geeks enjoyed the game, finding it to be fast and easy to play. It acted as a great “filler” and as a pleasant distraction while waiting at the restaurant table for food. According to one Child Geek, “I like games like this that are small, don’t have many rules, but still makes you think.” What the Child Geek is describing – and what I think Rune could be – is a “microgame”. These are small games packed in small boxes. Rune fits that description. Another Child Geek said, “It is like a puzzle that always changes. I won the last game and lost the other, but the games were always different, so I don’t feel bad.” Rune does have a lot of replayability since the cards are always random, as is the build on the table. When all the games were over, the Child Geeks gave Rune their full approval.

The Parent Geeks didn’t think Rune would be much good as a family game, but they loved how small and portable it was. According to one Parent Geek, “This is the kind of game that will live in my purse or my car’s glove box. It is small and can be brought out quickly, not to mention played just about anywhere. A much better distraction for my kids than their electronic devices.” Another Parent Geek said, “A nice little game. I would play this with my son when he wants to play a game or even with my wife if I could get her to like board games.” All the Parent Geeks found Rune to be a game with simple rules and fun gameplay. They brought it with them, mostly, to events where they needed a fun distraction for their kids. In all cases, Rune delivered.

The Gamer Geeks thought Rune was amusing, but that was about it. At first. According to one Gamer Geek, “An interesting little puzzle game with a great deal of replayability. A solid microgame, in my opinion. My only concern is the high level of randomness with the cards, meaning you don’t need much in the way of skill to win. Just luck.” Another Gamer Geek said, “As a microgame, I think it does the trick. Easy setup, fun gameplay, and easy fun. I wouldn’t’ add this to my collection, but I’d gladly play it.” All the Gamer Geeks discussed Rune in detail and decided that it would make for a solid filler or as a quick game at the local pub. While the gameplay wasn’t deep, it was deep enough to keep everyone having fun. The result was Rune getting the Gamer Geek’s full approval, despite its early failure to thrill the elitists.

Rune is a tight little game. I’ve played it several times with adults and kids and have always enjoyed playing it as well as watching the action. The game moves fast and keeps players engaged without feeling like too much weight. A great balance of strategy and tactics, especially when you throw in the Grand Master Rune tokens, which I think should be used for every game. Seriously. Use the mini-expansion. Always. While not necessary, the game feels better with it. One more level of control and deep thinking that makes the game feel more complete.

Overall, I am much pleased with Rune. It isn’t a game I would typically find or want to play, which is a real shame, as Rune was a hit on every table I played it on. Goes to show that even small games like Rune can still bring big fun to the gaming table. Give it a try and see if these runes rock your world.