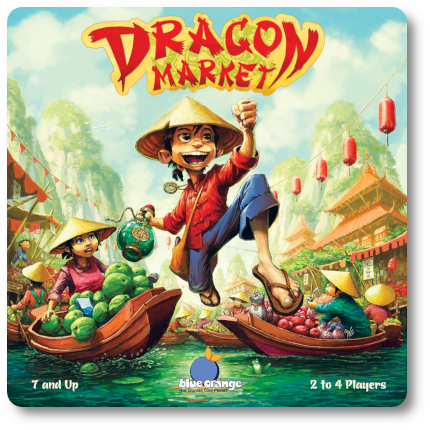 Congratulations! Your family has the honor of being invited to the prestigious wedding of a young princess. You are required to attend – without having any choice – and that brings up the problem of what wedding gift to bring? You consider your options and decide that one will not do for a princess. Making a list, you give what items to purchase to your energetic and talented heir. It’s on them you put your hope that one of the items to be collected is a gift that makes the princess smile and brings honor to your family.

Dragon Market, designed by Marco Teubner and published by Blue Orange, is comprised of one large game board, 10 Boat markers, four Heir pawns, two custom six-sided dice, 40 Merchandise tokens, 12 Coin tokens, 13 Red Objective cards, and 10 Blue Objective cards. The game component quality is excellent. The game board, cards, and all the game pieces are solid and durable. The game intray is well designed and keeps all the game pieces organized when the game is not in play. Once again, a quality release from Blue Orange.

Preparing for Your Shopping Trip

To set up the game, first place the game board in the middle of the playing area and where all the players can easily observe and reach it.

Third, each Boat marker has two open spaces (the third is occupied by the boat’s owner, referred to as the “Sailor”). Place two identical Merchandice tokens on each of the Boat markers, for a total of four Merchandise tokens per Boat marker.

Fourth, each player now takes the Heir pawn that matches the color of the corner of the game board they are closets to. Each of the four corners of the game board is occupied by what looks to be a dock. This area is referred to as the player’s “pontoon.” Players place their Heir pawn on the matching colored pontoon at this time.

Fifth, place the Coin tokens and dice to one side of the game board.

That’s it for the game set up. Time to go wedding gift shopping!

A Shopping We Will Go

Dragon Market is played in turns and rounds with no set number of rounds per game. A typical game turn is summarized here.

Step One: Roll Them Dice 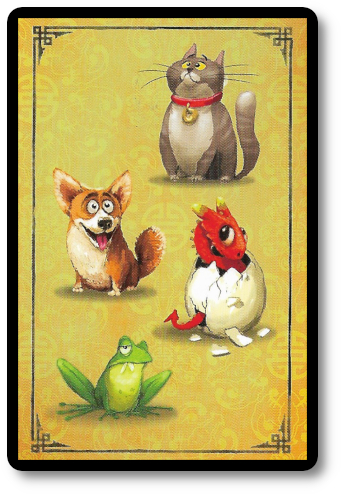 The game continues as noted above and ends when a player completes two Objective cards. The first player to do so is the winner of the game. Remember: An Objective card is not considered complete until the player returns their Heir pawn to their pontoon. More than one player will likely have collected all the required merchandise required by their second Objective card, making it an exciting race to see who can get back to their starting pontoon first! 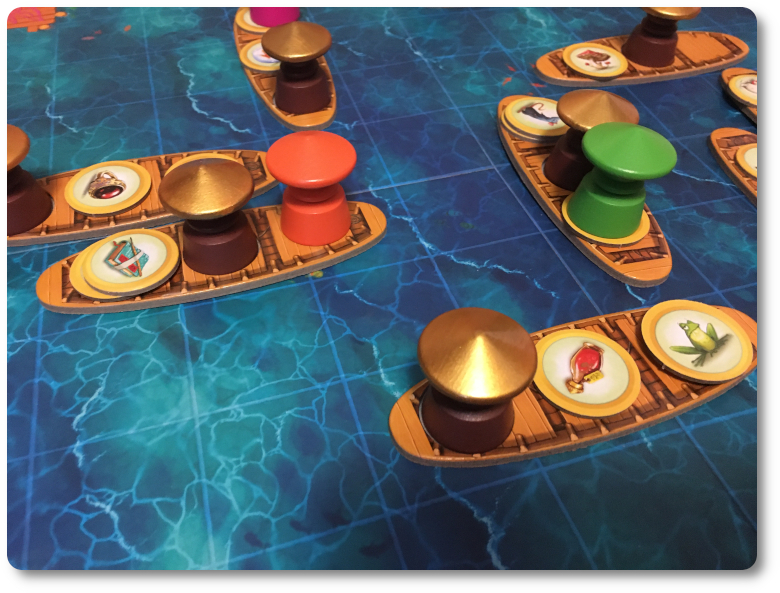 In our last game, we had an epic boat traffic jam

There are several game variants available right out of the box. Each is summarized here. 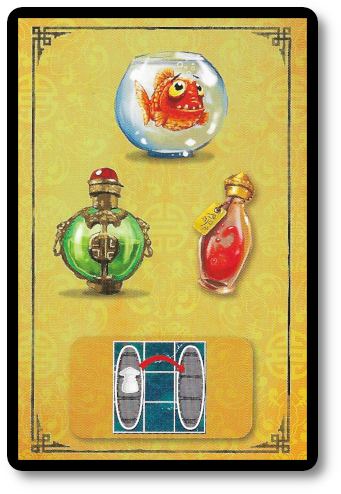 If playing the advanced game, victory goes to the first player to complete three Objective cards.

Like the advanced game, players must complete three Objective cards to win, regardless of what Objective card color they are using.

The rules are identical to the advanced game rules summarized above with the following exceptions:

Additionally, if using the Red Objective cards, only one player per team can use the bonus action per round.

The Child Geeks very much enjoyed the game, with the younger and less experienced crowd finding the Blue Objective cards and game rules to be at an acceptable level of difficulty and the more experienced, as well as older, Child Geeks preferring the Red Objective cards. According to one Child Geek, “This game reminds me of a sliding puzzle, where you have to move the different squares up and down until you make a certain pattern. This is better, though, because you have to not only think about what you shift but how you move around in the shifting puzzle.” Another Child Geek said, “Challenging, but not hard. I didn’t ever feel stressed, and I always had something to do. I like stealing coins from others, too.” When the last piece of merchandise was collected, the Child Geeks all agreed Dragon Market was a great time.

The Parent Geeks preferred the Red Objective cards right off the bat and enjoyed the team plays with their peers a great deal. According to one Parent Geek, “Casual and light, but the game makes you think and keeps you engaged. A great mix of puzzle challenges and logistics. I’d play this again.” Another Parent Geek said, “I like playing the game best with a partner. You can talk about your strategy, shift boats for your partner to take advantage of collecting merchandise, and take more offensive moves to slow down the other team. Great fun!” The Parent Geeks also enjoyed playing the game with their families but were frustrated that the game only allowed for four players at maximum. When all the games were over, the Parent Geeks gave Dragon Market their full approval.

The Gamer Geeks found Dragon Market to be a well-designed, high-quality, puzzle game. But they also found the game to be a bit too casual for their tastes. According to one Gamer Geek, “I’m going to give this game a mixed review for two reasons. First, I approve it because it is a fun game, great production value, and has a level of depth that makes it a challenge. Second, I am going to reject this game because it is too casual, doesn’t have enough depth, and has the potential flaw of giving one player a huge advantage based on the random Objective card they drew and the starting location of the Merchandise tokens.” Another Gamer Geek said, “A great game for the family and casual gamers. The best I can say about this game is that I’d play it with my family, happily, but this is not a game I would bring to my more advanced groups. There isn’t enough game in this game for my gamer buddies.” When the last Heir returned to their pontoon, the Gamer Geeks gave Dragon Market a mixed review, finding it to be an excellent game that wasn’t for them.

I very much enjoyed this game with all our groups. It’s true; Dragon Market feels a bit too light for players who enjoy games with a great deal of depth and complexity. However, it should also be noted that these same gamer types enjoyed every moment of gameplay with Dragon Market. The final votes from our groups are based on several different areas that they take into consideration. In all respects, Dragon Market scored high with the elitists, but when it came right down to it, the game didn’t deliver enough complexity to make the Gamer Geeks sweat.

Which isn’t a bad thing for the majority.

You don’t need every game you put on your table to give you the mental equivalent of hemorrhoids while you strain your brain to come up with your next move — all kinds of unnecessary. What you have here with Dragon Market is a game that balances complexity with casual gameplay. It has just the right amount of depth to keep you engaged, and the ever-changing game requires players to reevaluate the game board continually. You cannot help but keep your eyes fixed on the game even when it isn’t your turn.

My suggestion to you is that you only use the Blue Objective cards when playing with young Child Geeks or with players who have minimal experience with games. The Red Objective cards and the Advanced Gameplay variant are where you will be spending most of your time and feels the most satisfying. It ups the difficulty by a few notches without putting stress on any aspect of the gameplay. Sometimes game designers get it wrong, thinking that more choices give the game more depth. This is not correct. More options is just that – more opportunities — not more depth. In Dragon Market, the Red Objective cards do give the player more choices, but the results are beneficial to all the players who now get to see their game, and their choices change as well since the bonus actions shift the game board and its pieces for everyone.

Dragon Market was good fun, a clever puzzle to solve, and an entertaining game to play. I recommend it to families and to Gamer Geeks who want to play a game that keeps their interest but is still within reach of all their family members who yet don’t know the awesome power of a twenty-sided die. Do give Dragon Market a try at your family gaming table.