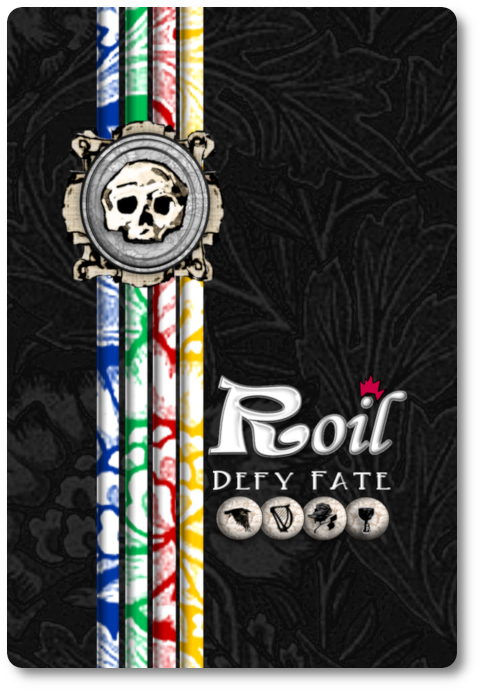 King Louis XIV, also known as Louis the Great or the Sun King (le Roi Soleil), was King of France from 14 May 1643 until his death in 1715. He said, “The ministers of kings should learn to moderate their ambition. The higher they elevate themselves above their proper sphere, the greater the danger that they will fall.” Politics can be a tenuous game of cat and mouse, with continuous tactical moves and deep strategy. We certainly see that in today’s politics, but it was so much more dangerous in the past when played at the court of kings and queens. You don’t lose your position, you lose your life and possibly your entire family line. In this game, your ambition to gain power must be tempered with building a foundation that can withstand the attacks from your rivals. In the end, only one house will stand above all others. Will it be yours?

Roil: Defy Fate, designed by Jason Orcena and published by Two Silver Denarii, is comprised of 70 cards. The cards are as thick and as durable as your standard playing card. The colors and text on the cards can be challenging to read at times, especially for those who already have problems seeing or are color blind. Not included, but necessary to play, is a pen or pencil and a piece of paper to keep track of players’ scores.

To set up the game, first take all the cards and shuffle.

Second, deal to each player five cards, face-down. Players can look at their cards but should not show them to their opponents until played.

Third, the remaining cards are placed face-down in the middle of the playing area. This is the draw deck for the duration of the game.

Roil is played in turns and hands with no set number of turns or hands per game. A player’s turn is summarized here. Each player plays cards in front of them.

The first thing a player does on their turn is draw three cards to their hand from the draw deck. If there are no more cards in the draw deck, shuffle the discard pile and flip it over to create a new draw deck.

The player can now take the following actions as many times as they like and in any order.

A “court” in Roil is a set of three or more connected cards played face-up to the table with their borders touching, creating rows and columns of cards that share similar colors. Two different colors may never touch. The one exception is an “Accord,” which is a card that contains three colors (not just one or two). This allows the player to connect it to any card as long as it shares the color found on the accord. 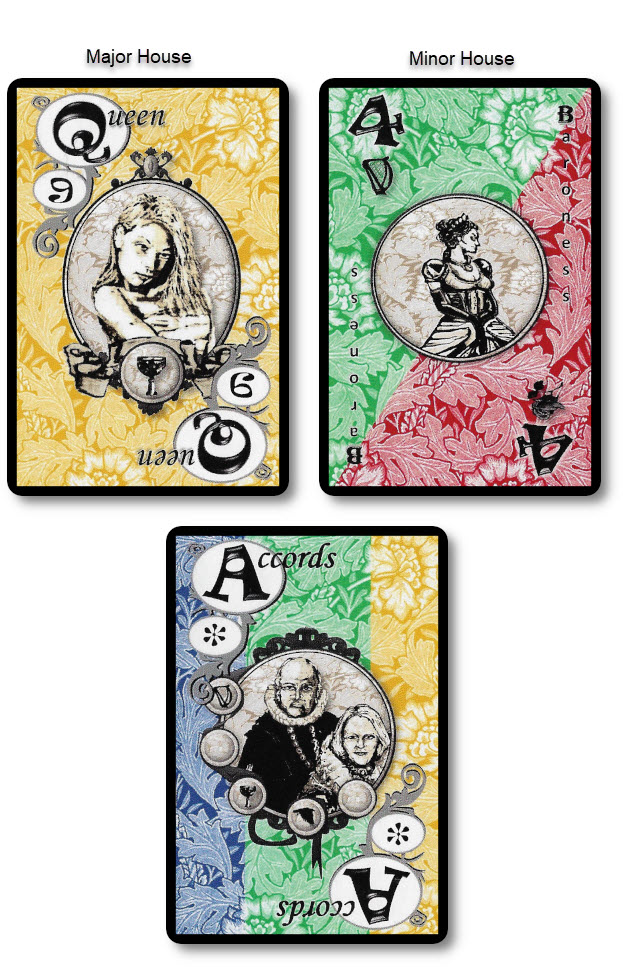 In addition to sharing colors, the cards must also build upon the existing rank of cards.  The ranking is defined as “greaters’, “peers,” and “lessers.” With the “greaters” being placed above cards with a lesser value, “peers” being cards of the same value placed to the same row, and “lessers” being placed below cards with a greater value. In this way, players build to an ever-growing grid of rows and columns defined by the cards’ color and rank.

A court must always be maintained with a minimum of three connected cards (either in rows or columns) and be connected. If this threshold ever drops below three, the court “collapses,” and all the cards in the disconnected court return to the player’s hand. It’s always the player’s choice when determining what cards are considered “collapsed.”

Each player creates and maintains their own court in front of them.

Play a Card to the Court

The player can add one card from their hand to their court as long as the card’s placement follows the color and ranking rules. 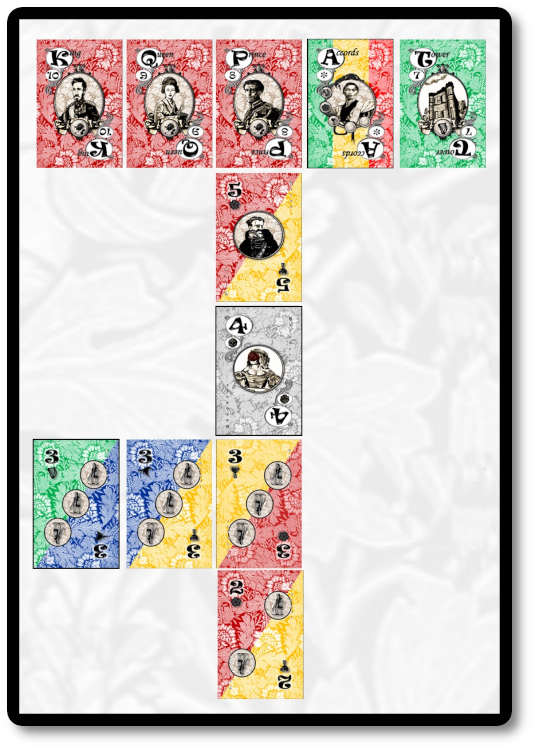 Example of a court in progress (image courtesy of roilcardgame.com)

Grey colored cards are considered “shadows” and can be played in two different ways. 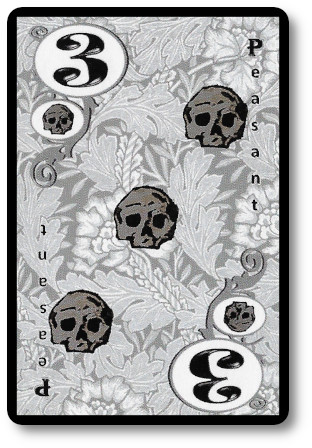 The first is a “wild” card. They can be played directly to the court and take on the color they are attached to. The rule of rank progression and placement must still be followed. 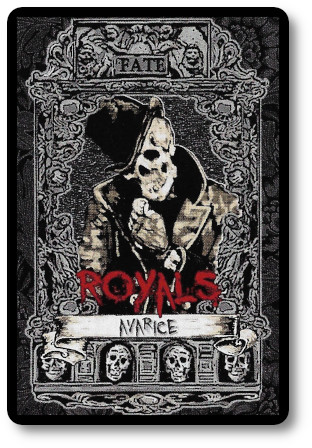 When the player is done with their turn, they count the number of cards in their hand. The player must discard as many cards as needed until their hand has five or fewer cards.

Winning the Hand and the Game

The hand ends when a player finishes their turn with a court that scores 65 or more points (counting the number values of the cards in the court), or their court is the first to include cards of each rank. The scoring value is based on the card’s rank. The score is added to the player’s total.

When a player meets the requirements to complete the hand, all other players must immediately play any “Fate” cards remaining in their hand to their court. The players then score their own court using the scoring above. They also count the number values of the cards remaining their hand, subtracting them from the total points earned from their court. The score is added to the player’s total.

This completes the hand. A new hand can now be started by shuffling and redealing the cards. Play as many hands as you like. When the final hand is completed, the player with the most points wins the game.

The Child Geeks understood the game without issue, but it didn’t keep their interest. At least, not the younger and more casual crowd. According to one Child Geek, “I think the game is OK. I like messing with my brother when we play, but I think the game is not all that exciting.” But another Child Geek disagreed, saying, “I think this game is a much better version of Dominios that I was taught last week up in the cabin. It is fast, and you get to interact with the other players a lot more. Plus, you get to create your own area to work on instead of needing others.” None of our Child Geeks felt lukewarm about the game. They either loved it or disliked it. When the final votes were in, it was roughly split 50/50, resulting in a mixed review from our young players.

The Parent Geeks, on the other hand, enjoyed the game a great deal. According to one Parent Geek, “A good game. Simple rules and fast gameplay. It felt like a puzzle to me, with just enough player interaction to make it also feel competitive. I enjoyed it and would play it again.” Another Parent Geek said, “I liken it to interactive Solitaire, or something similar. Everyone is building their own, but you still need to keep an eye on your opponent – and if the need is great – take out their cards.” The Parent Geeks found the game to be entertaining most with their peers, with the family gaming to be a bit too slow at times. This measures up to what the Child Geeks were saying, as a kiddo who isn’t engaged at the gaming table seldom takes their turn promptly. When all the courts were built, the Parent Geeks voted to approve Roil.

The Gamer Geeks thought the game was creative, but not compelling. According to one Gamer Geek, “I think it is a great example of how cards can continue to be used to create different types of games. This game, notably creative, didn’t do it for me. It was a mix of gameplay and presentation. Gameplay was just OK, as in all I had to do is place a card, in the same way, I would place cards if I were playing Solitaire. The presentation of the game needs work. The cards are way, way, way too busy. I know what they were trying to do, but it just didn’t come across as a clean and crisp design.” Another Gamer Geek said, “A game I’d recommend to casual players, but not a game I would bring to my gaming table with my elitist friends.” When the final votes were in, the Gamer Geeks rejected Roil based on the fun they had, not based on what they believed to be faults.

Roil was mentioned several times (both in this review and during player commentary around the table after our games were over) as being something similar to Solitaire. I see it, too. The game is all about lining up cards based on values and colors, just like Solitaire. What is different is the light player interaction that allows you to break another player’s attempt to create order from chaos. Just enough to make it annoying at best, but never really leans into it. I cannot determine if this was by design, wherein the game was always meant to be enjoyed as a group with a light touch in the area of player engagement, or something of an afterthought based feedback from playtesters. Either way, it works but doesn’t feel like it was ever part of the core idea. I liken it to being delivered a juicy steak with a side of macaroni and cheese. Yes, they work together, but the pairing feels forced instead of thought out.

Overall I found the game to be enjoyable but not overly rememberable. The most prominent supporters of the game were the Parent Geeks, who are always on the lookout for an easy game to learn, fast to set up, and not overly difficult to play with a house full of activity at your back. In all respects, Roil fits the bill per the Parent Geeks’ shortlist. But a great game with memorable moments and deep gameplay it is not. Not enough player interaction for the Child Geeks and not enough “game” for the Gamer Geeks.

Would I recommend the game? I wouldn’t recommend you buy it, but I do suggest you try it. It isn’t a bad little game. Give it a try and see if it Roil: Defy Fate is destined to be a winner or a loser at your family gaming table.