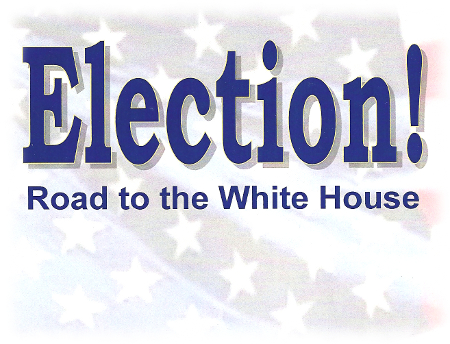 American syndicated columnist, pundit, author and radio commentator, Cal Thomas, said “One of the reasons people hate politics is that truth is rarely a politician’s objective. Election and power are.” Many share this point of view, but there are still many more who consider politics and politicians vitals gears in the democratic machine, for better or worse. In this game, players pit politicians from different time periods to debate universal concerns.

Election: Road to the White House, designed by Keith Lambert and published via the Game Crafter, is comprised of 1 game board, 6 Player pawns, 12 custom dice, 74 Presidential Candidate cards, 58 Election Year cards, 30 Public Opinion cards, 30 Red Tape cards, and 6 Election Process cards. The cards are as thick and as durable as your standard playing cards and the game board is made of thick cardboard.

Getting Ready for the Election

Second, have each player select a Player pawn. This Player pawn represents the player’s political part for the duration of the game. The Player pawns are placed on the “Vote!” space on the game board. Then each player is given an Election Process card that matches their selected token card. This card will assist the player during the game. Any Election cards and tokens not being used should be returned to the game box.

Third, take the dice and place them in the matching colored boxes at the bottom of the game board.

That’s it for game set up. Time to see who will run our country.

Election: Road to the White House is played rounds and turns, with not set number of rounds per game. A typical game round is summarized here. 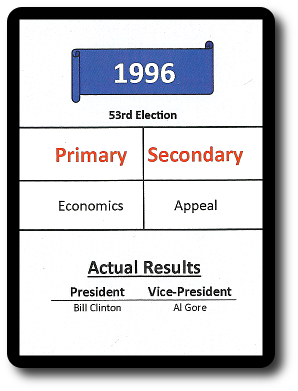 The “Actual Results” printed below the primary and secondary issues show who won the presidency. Players should keep this in mind during step 2. 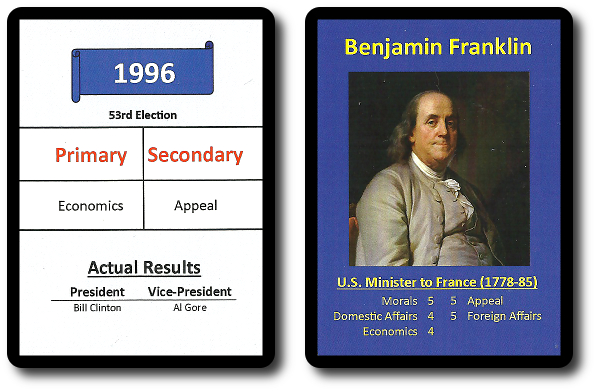 Yellow text for Franklin indicates he was never president, but was an important figure in history

Since Benjamin Franklin is not listed as the President or the Vice-President of the 53rd Election in 1996, the player will not get a bonus.

Dice are now rolled based on the Presidential Candidate card played. Each number value noted on the Presidential Candidate card corresponds to 1 of the 6 possible dice boxes on the bottom of the board. For example, the primary issue category is “Economics”. For Benjamin Franklin, the player would collect both dice in the dice box numbered “4”. For secondary issue categories, the player can only ever roll 1 die. If both the primary and secondary issue categories roll the same colored dice, roll one set, count the total value, and then roll the dice again, adding the rolled value to the total.

Not all dice are created equal. Dice in box #1 will not roll as high a number as dice in box #6. As such, a player who rolls dice in a lower box number is not as strong in the indicated issues category as another Presidential Candidate.

After rolling, add up the total number values of all dice. The total value equals the total number of votes the player’s Presidential Candidate receives. Then the dice are returned to the box that matches the die color.

All players, in turn order sequence, now repeat the steps above, except for drawing a new Election Year card (all players use the same Election Year during the round). Players can, if they so choose, concede the election. This means they do not play a card for this round and bow out of the voting process. They do not roll any dice as a result.

The winner of the round is now the first player for the next round.

The Red Tape and Public Opinion cards can be played at anytime during the round, but only when specified by the card. 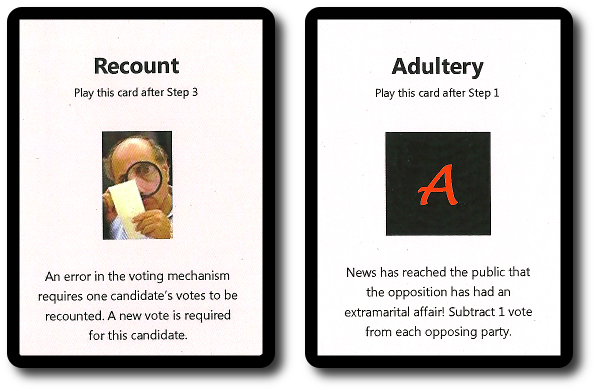 Any number of Public Opinion cards can be played by any player during the game at anytime after the Election Year card has been drawn for the round. The Public Opinion cards will either increase the player’s Presidential Candidate card’s values in the specified issue category or reduce all opponent’s category values to a minimum of 1. These cards are meant to improve or reduce the total number of votes of a candidate. As such, a player needs to consider how important at vote might or might not be. 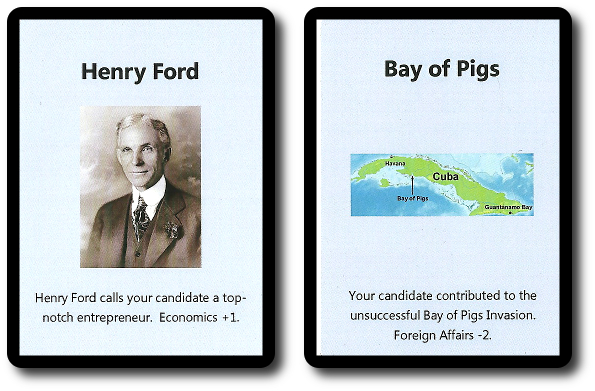 The first player to advance their Player pawn to or beyond the White House space is the winner of the game. 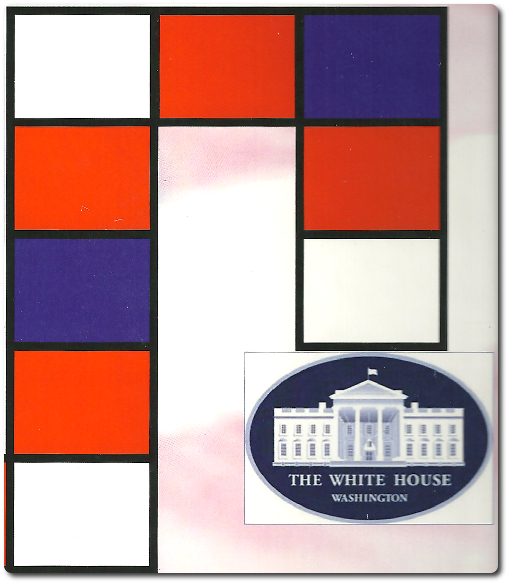 To learn more about Election: Road to the White House, visit the game’s web page.

The Child Geeks recognized a few of the politicians on the Presidential Candidate cards, but for the most part couldn’t care who the people were or what they did. Which is fine, as learning about history is not really the goal of the game. What the Child Geeks did and did well was quickly recognize that the polling strengths were the equivalent to combat attributes. They also recognized that the odds of winning could be increased if they applied some critical and logical thinking before playing. According to one Child Geek, “This game is all about playing cards with big numbers.” Another Child Geek said, “If you can upset your opponent’s ability to roll the good dice, that’s like taking votes away and votes is what you need to win.” While reaching the White House was the destination, all the Child Geeks agreed that the real fun was the journey. When the games were over, the Child Geeks thought it was amusing to wage epic political war using people that they hadn’t heard of. 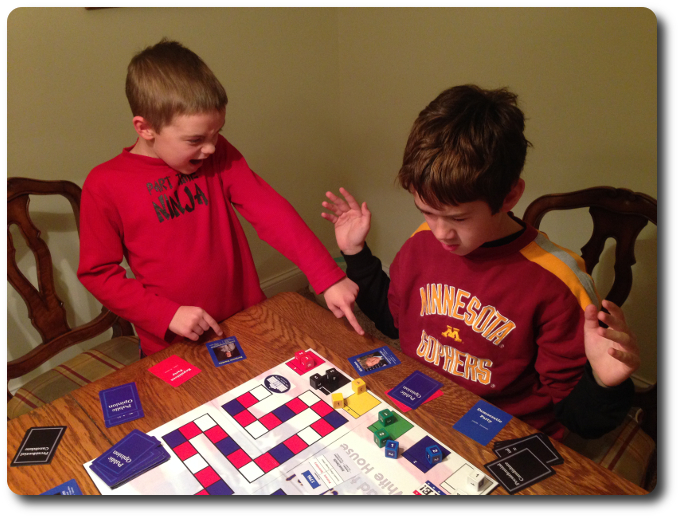 The Parent Geeks had high hopes for this game and were ultimately disappointed that Election: Road to the White House didn’t spend more time educating the players. According to one Parent Geek, “Even I don’t know who all these people are. It would have been nice if there was a stronger educational component to the game so you felt like you were learning while playing.” Another Parent Geek said, “I think it’s pretty funny how the game waters down each politician to little more than a few numbers. Marginalizes there political efforts and contributions to a point where even the names of the people portrayed are meaningless.” While the Parent Geeks were disappointed with the game’s lack of educational historical muscle, they were only slightly less disappointed with the game play. According to one Parent Geek, “Feels a bit like Candy Land in the world of politics.” But this sentiment was not shared by all the Parent Geeks. When the votes came in, about half of the Parent Geeks found Election: Road to the White House to be a Political game that the entire family could play that also kept their Child Geeks engaged. As one Parent Geek put it, “I want my kids to be interested in politics and this game could help me do just that.” The end result was a mixed level approval from the Parent Geeks.

The Gamer Geeks disliked the game, finding it to be too simplistic and lacking enough depth to be of any interest. According to one Gamer Geek, “There are a few aspects to the game that are OK. For example, the different polling values and using those to improve your ability to win, but the rest of the game is pretty silly.” Another Gamer Geek said, “No, this is not a game for people who play games seriously or want a game with a lot of challenge. This is a game for people who are just starting to learn about games.” Which is a pretty positive comment from the gaming elitist. All the Gamer Geeks agreed that the game wasn’t worth much to them, but none of them were willing to say that the game itself was worthless.

One of the game’s publicized benefits is that you do not need to know anything about history or politics to play the game. This is absolutely true. While this was of great benefit to our younger players, a themed game that dealt with politics, and yet did nothing with it, made the game fall flat for everyone else. I thought the game designer did a pretty good job of condensing the political struggles of each election year down to a few simple values that represented the whole. However, by doing so, much of the importance and drama of the political stage is either completely removed or watered down to a point where it’s no longer of any importance. For political junkies, this game will greatly disappoint, but for those who know nothing of politics, Election: Road to the White House will spark interest.

I would position this game as a family game. Politics can be (and oftentimes are) dry. This is especially true for children and somewhat true for adults. Election: Road to the White House strips away the posturing, the speeches, and the lengthy campaigns to focus on the issues. However, the game doesn’t really go into the issues, and by doing so, ultimately makes each politician nothing more than a means to roll dice. Is that a bad thing? No, not at all, but I suppose it really comes down to what your expectations are.

I think what Election: Road to the White House really offers is a glimpse of the world of politics and the politicians who live within it. If you are looking for a game that introduces politics, but stops well short of pontificating, gives players just enough to think about to make turns meaningful, and where playing the odds is just as effective as playing towards strengths and weaknesses, then do take a look at Election: Road to the White House. While it might not win any votes for Game of the Year, it’s still a game worth noticing.