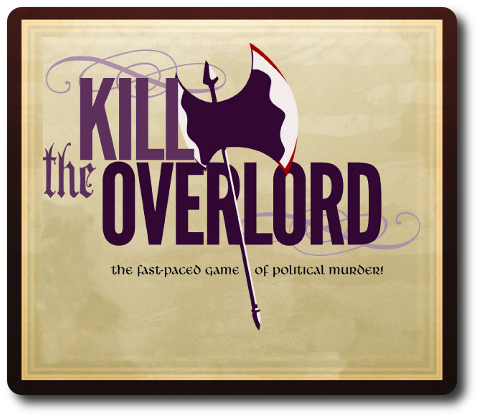 Milton Friedman once said, “Hell hath no fury like a bureaucrat scorned.” This game epitomizes Mr. Friedman’s sentiment. One player is the Overlord, an individual with absolute power, and they have but one goal: take out the trash. In this case, the “trash” if everyone in their court, from the lowliest servant to the most seemingly loyal patron. The only way to survive the mass execution is to ensure someone else gets “the chop” before you. Politics can be a deadly business.

Kill the Overlord, designed by D. Brad Talton, Jr. and published by APE Games, is comprised of 8 Character Role cards (double-sided, depicting both a male and female version of the role), 8 Elimination tokens (values 1 through 8), 8 Alternative Character Role cards, 1 Execution Order card, 42 Plot cards, and 76 Gold tokens (in values 1, 5, and 10). All Character Role cards (including the alternative versions) and the Execution Order card are double the size of a standard playing card. All the cards are as durable as your standard playing card and all tokens are made of thick cardboard. The character illustrations by Victoria Parker are excellent, bringing to life each of the roles with excellent detail and color.

Setting Up the Royal Court 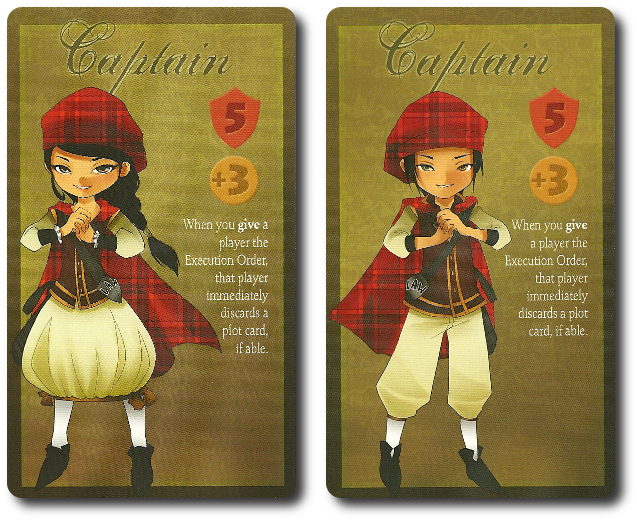 Fourth, give each player 5 Gold (either 1 “5” Gold or 5 “1” Gold” tokens), placing the remaining Gold tokens off to one side of the gaming area. This is the “Treasury” for the remainder of the game. It often helps to assign one player as the “Banker” to quickly assist in making change and distribution funds from the Treasury.

Fifth, shuffle the Plot cards and place them face-down in the middle of the playing area. This is the Plot draw deck for the duration of the game.

That’s it for game set up. Time to execute the game play.

Off With Their Heads

Kill the Overlord is played in rounds with each round divided into phases. There are no set number of rounds in the game. A typical round is summarized here.

Each player draws (or is dealt) up to 2 Plot cards, up to their hand limit which is determined by their current Character Role card. The majority of the time, players will have a maximum hand size limit of 4. For example, if the player already had 3 Plot cards, they would only draw 1 Plot card. If the same player only had 1 Plot card, they would only draw 2 Plot cards, resulting in a hand size of 3 Plot cards. Player who already had the maximum number of cards or more than they could hold in their hand, do not draw any Plot cards, Nor do they discard down to their maximum.

Players received their initial income of 5 Gold when the game was set up. As such, this phase is skipped during the first round of game play. During the second and subsequent rounds of play, each player is given a number of Gold equal to the Gold Coin icon value found on their Character Role card. The Gold is taken from the Treasury and added to the player’s current Gold total. Note that the amount of Gold a player has should always be visible to the player’s opponents.

Whomever has the “Overlord” Character Role card now counts their total Gold. If they have “30” or more Gold, they have won! If not, the game continues and starts to get bloody…

The player with the “Overlord” Character Role card now selects 1 opponent to execute. They hand that opponent the Execution Order card and smile wickedly. Now things get interesting. 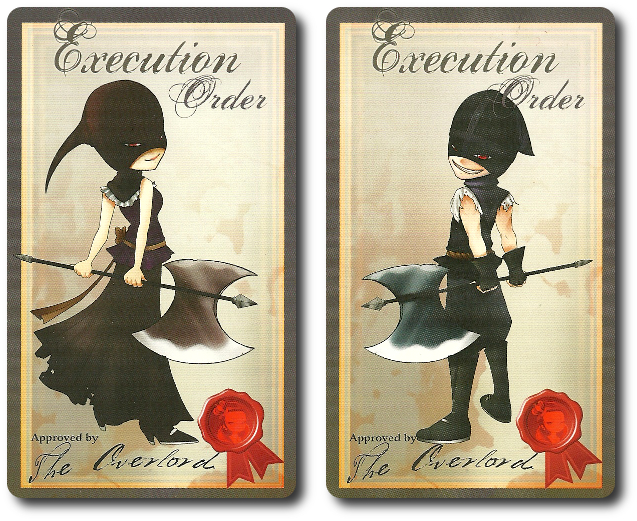 The professional field of royal executioners is an equal opportunity employer 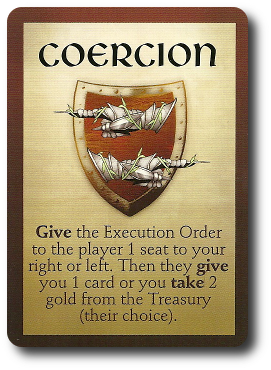 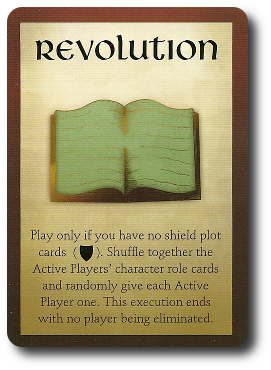 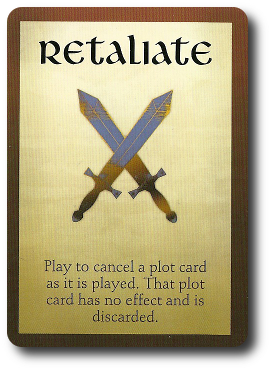 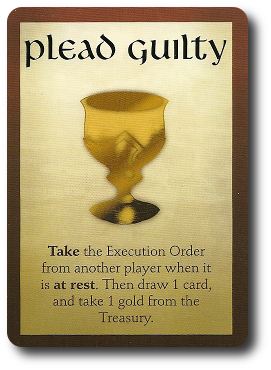 The player who currently has the “Overlord” Character Role card then collects the Execution Order card and passes it to another opponent. Essentially, restarting Phase 4.

This ends the round. A new round now beings with phase 1 noted above.

The game ends when the player with the “Overlord” Character Role card has “30” or more Gold during phase 3 or is the last player alive in the round during phase 4. 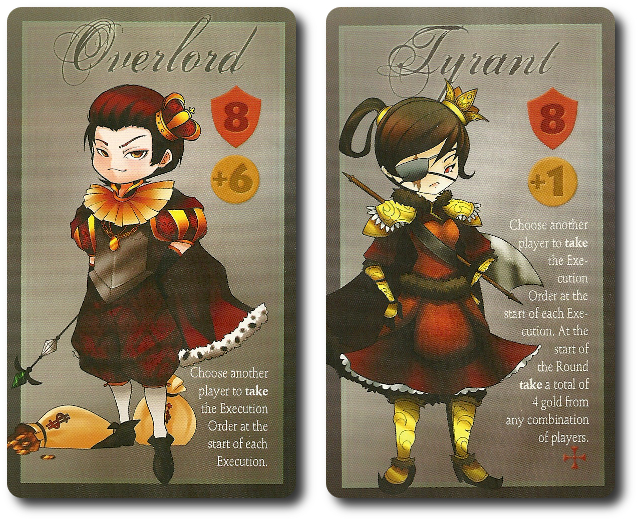 Pick your poison – both are deadly

All the rules are the same with the one exception of the “Overlord” title. Wherever “Overlord” is noted, replace it mentally with the title “Tyrant”. If you mixed all the Character Role cards (alternative and standard) together, “Overlord” and “Tyrant” are the same thing.

To learn more about Kill the Overlord, visit the game’s web page.

The Child Geeks very much enjoyed Killed the Overlord at first. They understood how the game was played and what was expected of them without issue. Some very smart takes and gives were observed and I thought for sure we’d have a real winner on our hands. Unfortunately, the game also created some not-so-friendly moments where players started to feel picked on or unable to take any action at all. Without the right Plot cards, players are left without much hope of avoiding the Execution Order. And if one or more opponents are targeting a single player, no Plot card in the game will save you. As the games continued, the level of frustration and aggression began to rise. According to one Child Geek, “I like this game most of the time. I think it’s too long and starts to get nasty.” That sentiment was shared by a number of Child Geeks. And yet, not all the Child Geeks disliked the game. Kill the Overlord was always warmly welcomed to the gaming table, but most of the players lost interest after about 5 or 6 rounds of play. The finial vote left Kill the Overlord teetering in the middle, between “enjoyed” and “disliked”. 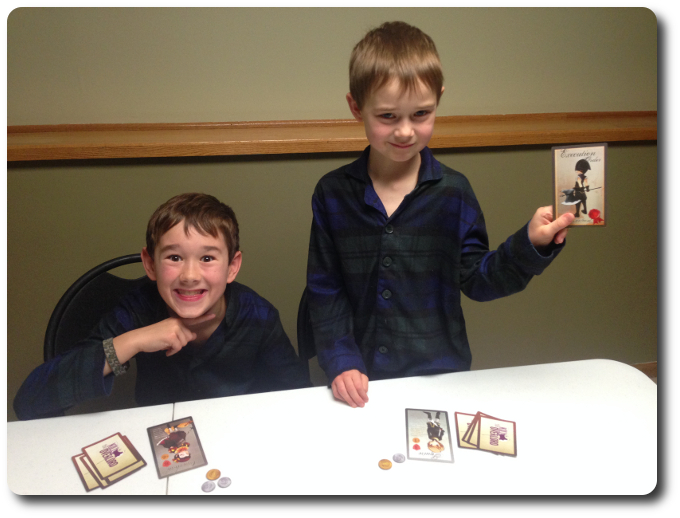 The Parent Geeks enjoyed themselves and played all the games with as much mischievous deviousness as one would expect. The Parent Geeks enjoyed the casual game play and how undemanding the rounds were. This allowed them to be social while attempting to kill each other off. What they didn’t care for was the amount of randomness the game sometimes provided. According to one Parent Geek, “This game feels a bit uneven at times. I can’t determine if that means it’s too random, unbalanced, or I’m just a bad player.” The Parent Geeks were also confused about some of the Plot cards and how they should be used. While the wording on the cards is fairly straight forward, their proper use is not. This caused some confusion and delay until the Parent Geeks collectively decided to agree on how to properly resolve it. In the end, the Parent Geeks though Kill the Overlord was entertaining, but they found some of the games to be too long, too much emphasis was put on some poorly worded cards, and the overall experience left them lukewarm.

A few of the Gamer Geeks already knew how to play this game when I introduced it and launched into their own individual debate concerning the pros and cons of Kill the Overlord. Interesting to listen to, but ultimately riddled with so much subjectivity that all the Gamer Geeks listening just rolled their eyes. The Gamer Geeks had no issue learning how to play the game, quickly resolved any wordage issues on the Plot cards, and demonstrated how perfectly they knew how to creatively backstab. As the games progressed and time rolled on, the Gamer Geeks started to shift their opinions. According to one Gamer Geek, “This feels like you are playing in traffic during Rush Hour. You know you are going to be hit. It’s just a matter of when.” Another Gamer Geek said, “I think it’s a good game as a filler. A bit long at times and terribly random, but an interesting game to play with the right group when you have some time to kill.” One Gamer Geek voiced his opinion over the crowd by saying, “See? I told you! Too light, too random, and too damn long. Let’s play something else.” When the cards were put away, some Gamer Geeks found Kill the Overlord to be entertaining while others didn’t care if they never played it again.

Kill the Overlord is all about ducking and dodging the inevitable. It is, in essence, a game of Hot Potato. However, a player will quickly realize that there is more to this game than simply attempting to survive and passing the deadly spud. There will come a time during an execution that the players will want their character to be taken out. Since the Character Role card selection order is based on the order in which the players were executed, timing your current character’s death makes sense if a specific Character Role card is required in the next round.

Overall, I have enjoyed this party game. It plays fairly smooth but also tends to overstay its welcome at times. Not sure how that can be fixed other than reducing the number of players or changing the required number of Gold to win the game. And yes, it’s random. You can offset the randomness by attempting to time your execution to maximize Character Role card selection, but that’s about it. Everything else is random, from who is attempting to kill your character to the Plot cards you have to available to passive aggressively defend and attack others.

One thing is for certain: this game makes friends into enemies. You’ll be looking to take advantage of any weakness your friends might have. You’ll be watching cards played, measuring an opponent’s ability to avoid the ax, and taking advantage of every opportunity to stay alive just a bit longer. That’s pretty enjoyable with the right crowd and can make even this seemingly random game into a methodical game of back stabbing. Should make for an interesting party.