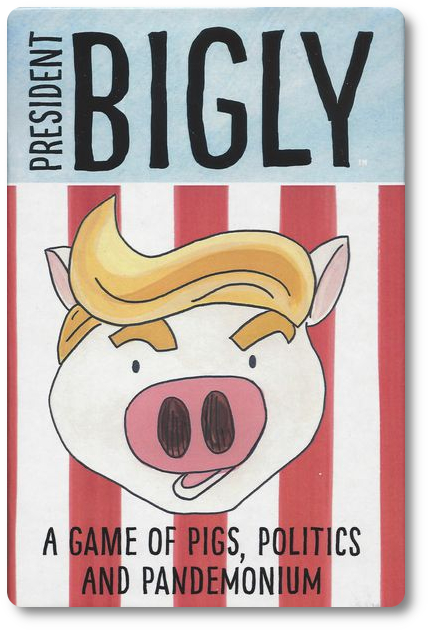 Love him or hate him, our President has an interesting take on the English language. He has used the word “bigly” to suggest something of grand proportions. Believe it or not, “bigly” is a legit word, although it does sound like something a kindergartner would say when describing the size of the ice cream cone they want. In this game, the goal is to win “bigly”, but doing so requires you to backstab friends and family all the way to victory.

President Bigly, designed by Dan Blakely and published by Origami Gameworks LLC, is comprised of 56 cards. The illustrations, by artist Megan Norris, are colorful and comical, preferring a simpler drawing style to deliver political satirical images rather than provide a lot of eye candy. In truth, the images look a lot like what I see coming out of 8th grade art class nowadays.

To set up the game, first find and remove the four Tranquility cards and the six Chaos cards. Set these aside for the moment.

Second, shuffle the remaining cards and deal four to each player, face-down. This is the player’s starting hand. Players should keep their hand of cards hidden from their opponents.

Third, shuffle and deal one Chaos card to each player’s hand then add any remaining back to the deck of cards.

Fifth, shuffle the deck (which now includes both Chaos and Tranquility cards) and place it in the middle of the playing area, face-down. This is the draw deck for the duration of the game. Leave room next to it for a discard pile.

Second, decide as a group if the playing style will “embrace chaos” or “spread tranquility”. If a decision cannot be made, flip a coin to decide.

President Bigly is played in turns with no set number of turns per game. Unlike traditional games, turn order sequence goes counter-clockwise. If any player has the Veto card in their hand, they can play it during or out of turn to interrupt game play. A player’s turn is summarized here.

Step One: Play Cards (Or Don’t)

The first thing a player does on their turn is play one or more cards from their hand (if they want to), placing them face-up in the discard pile. More than one card can be played at a time to create power-play combos. Combos are considered a pair or three-of-a-kind of the same suit, which gives the player an extra special action. 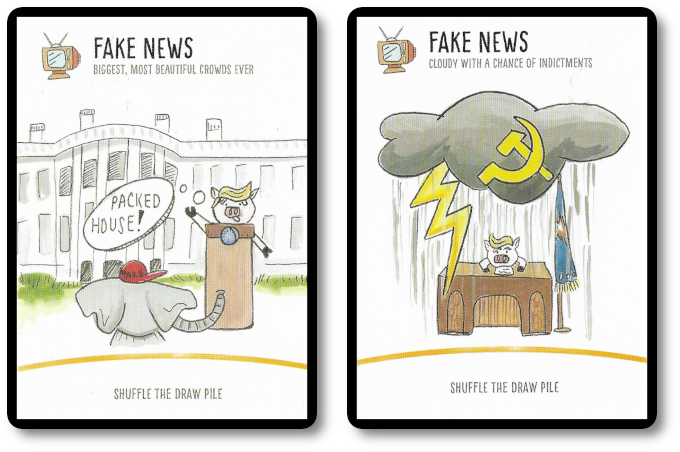 A player can also decide to do nothing on their turn and end it by jumping to step four.

The player now resolves the actions noted on the cards they played. At this point, players should take special note as to what playing style was selected during game set up, as the choice made will determine which actions are taken one some of the cards. 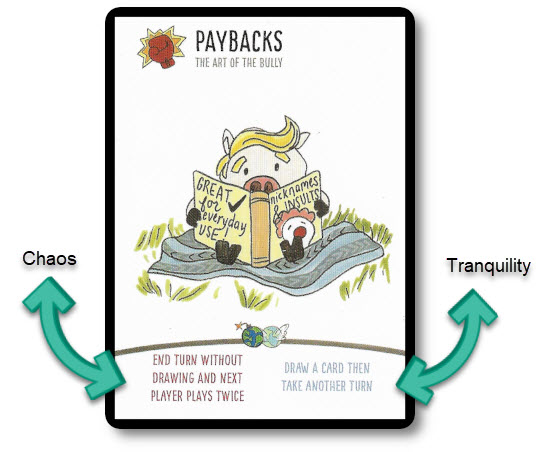 After resolving their first single or set of cards, the player can now decide to play additional cards, repeating steps one and two. Or they can decide to end their turn. 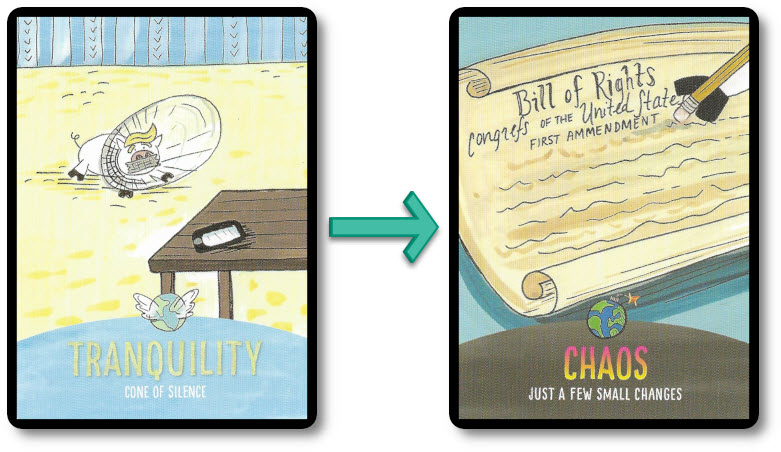 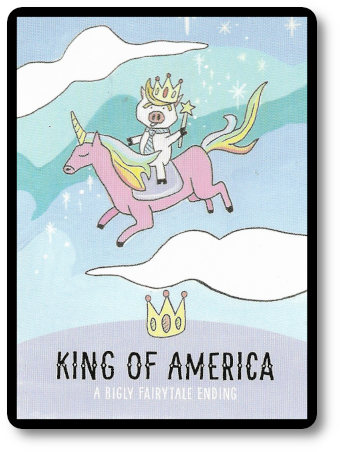 The Child Geeks liked the game well enough to play it several times before they wanted to vote. A good sign! According to one Child Geek, “I like the card artwork and think it is funny that the president is a pig. I don’t like losing, so I always vote for tranquility.” Another Child Geek said, “The game feels easy to learn but is pretty tough to play. I get a little frustrated because I don’t always have the cards I want to block, but I liked playing with my friends.” The Child Geeks were aware of the political undertones of the game and what was being portrayed, but they didn’t care. To the Child Geeks, politics are something that bothers adults, not them. The Child Geeks focus first on the fun. Which they did have only half the time, resulting in a mixed bag for the Child Geeks.

Holy cow, did this game ruffle some feathers. According to one Parent Geek before we even got started, “I don’t want to play a game about our president unless impeachment is in the title or the game’s goal.” Yikes. Another Parent Geek said, “I hear about this guy every day for hours on end. I want a break.” But not everyone felt this way. A Parent Geek came to the game’s defense and said, “I like that this game is sticking its tongue out at politicians. Should give me a laugh.” Game play wise, the Parent Geeks didn’t think President Bigly was all that innovative or interesting. They found the game to be “OK” or forgettable, preferring card games like Exploding Kittens (which is similar in game play). In the end, the Parent Geeks gave President Bigly a very mixed endorsement.

The Gamer Geeks felt that President Bigly was trash. According to one Gamer Geek, “There is nothing about this game that is interesting or new. They took pretty standard rules already in other games, added in political context that they new would sell, and published it. I’m sure it’ll make money, but this is a game you play once and you don’t want to play again.” Another Gamer Geek said, “I’ve played worse games, and the game itself would be OK for families and casual players. I don’t think this is a game for elitists players or for anyone who wants to play a game were skill and critical thinking is necessary.” The Gamer Geeks didn’t hesitate to vote President Bigly out of office and out of playable range.

Here’s my take on how the game was received. America right now is in something of a political tailspin. Lots of anger and frustration. The world watches the United States from afar and facepalms or laughs their asses off. Inside our borders, we are continually inundated with political bombardments, finger-pointing, and fear mongering. It’s the Democrats’ fault. It’s the Republicans’ fault. It’s the immigrants’ fault. Impeach. Don’t Impeach. Collusion. No collusion. Fake news. News of things that are unfortunately not fake. And so on…

America has what many countries don’t and that is a political societal pressure valve. We use humor and sarcasm to express our frustration and leverage it as a platform to get people talking. Comedians and satirical writers tap into society’s growing anger, frustration, and fear, turning it back on itself, like a mirror. We smirk, feel better, and the pressure is eased. The thing is, the pressure in America is growing at a fast pace and everyone is getting burned out. We keep having the same conversations, say the same jokes, and everything is starting to feel ugly and old. It isn’t our current president that created the unease (it’s been there a long time, folks), but he is most certainly the proverbial straw that has broken the camel’s back, acting as a flammable accelerant poured on a smoldering fire.

Which brings me to President Bigly. At it’s surface, with the game’s theme stripped away, it’s a solid “take that” card game, all about outlasting and surviving with lucky card draws and well-timed card plays. Lots of card games on the market have the same type of game play. Add the political theme and the game play suddenly takes on dark undertones and resonates with the player on a whole new personal contextual level. This created a lot of animosity towards the game, born out of frustration with America’s political climate.

Fair? You bet. A game is comprised of three major parts. Rules, components, and theme. Rules define the path, components are used to walk it, and the theme makes the journey interesting. The rules in this game and the components are fine. It’s the theme, in this case, that repelled more than compelled our players

I personally found the game to be “ho-hum” at best. I neither liked it or hated it. There was a time when a card game like this was eagerly sought out by me as a means to provide a casual experience that let players be social and laugh with little effort. This card game didn’t do that. It created bitter statements and hostile game play. In short, the game suffered due to the very politics it is attempting to satire. I don’t know if that is irony or just bad luck. Either way, it’s sad.

I honestly have no clue how to properly present this game to you, the reader. I suggest you focus on the game play. The rules are solid, game play is quick, and victory goes to the player who tends to be the luckiest rather than the most skilled. Meaning that the game is easily played casually when you need something to do as a group, but you don’t want to spend a lot of mental energy doing it. If this sounds like the kind of game you’d like or you want a game where it makes fun of our current president, then grab yourself a copy of President Bigly. If not, well, you know exactly what to avoid.

One final suggestion if you decide to play this game. Make sure the political alignment of those you play with is similar to yours. I won’t go into detail, but one of the most uncomfortable game playing sessions we had was with half the table being pro-Trump and the other side being decidedly and vocally less so. It wasn’t a good time.

And that’s not fake news.