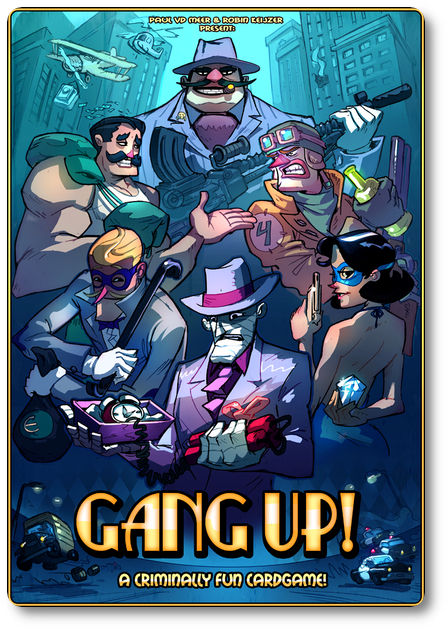 Here’s the skinny, bub. I got this friend, see, who knows about a “big score”. All I need is the right talent and muscle and we could make a lot of cash. What do you say? You in or out? In this game, you are a criminal looking to make a quick buck. But what kind of criminal are you? Are you a mastermind or just a thug with a lot of ambition?

Gang Up!, designed by Robin Keijzer, Paul van der Meer and published by HOT Games, is comprised of 110 cards. The cards are as thick and as durable as your standard playing card. Illustrations, also by Robin Keijzer, are colorful and stylized, giving the game a distinct look of its own that is both enjoyable to view and further reinforces the game’s theme. Not included with the game, but necessary to play, is a small coin for each player or another method to mark small values on a card.

Welcome to the Gang

To set up the game, first look through the deck and find all the Gangster cards. From these cards, select one Gangster card per player with a status value of five or less. Set these cards face-down in the middle of the playing area. This area is referred to as the Jail pile. Leave room for a Jail discard pile.

Second, look through the deck and find all the Crime cards. Shuffle and place face-down next to the Jail pile. This is the Crime pile. Leave room for a Crime discard pile and a Crime “In Progress” pile.

Third, take the remaining Gangster cards and the Influence cards. Shuffle and place face-down next to the Crime pile. This is the Resource pile. Leave room for a Resource discard pile.

Fifth, deal to each player six cards from the Resource pile. Players should keep the cards in their hand hidden from opponents until the card is played.

Gang Up! is played in turns with no set number of turns per game. A player’s turn is summarized here. When a player is taking their turn, all players should keep track of changes to the table as cards are played and removed, as some Gangster cards in the game have special rules that will move them in and out of the game, from one player to another, as the game progresses. Gangster traits are always applied whenever they are relevant in the game, but Gangster actions must be activated to be used. To activate, the player must discard a specified number of cards from their hand. The action can be used as many times as the player likes during their turn or out of turn. If a gangster is “killed”, the card is discarded. If the gangster is “arrested”, the card is moved to the Jail pile.

The player draws the top-most card from the Resource pile, adding it to their hand of cards. 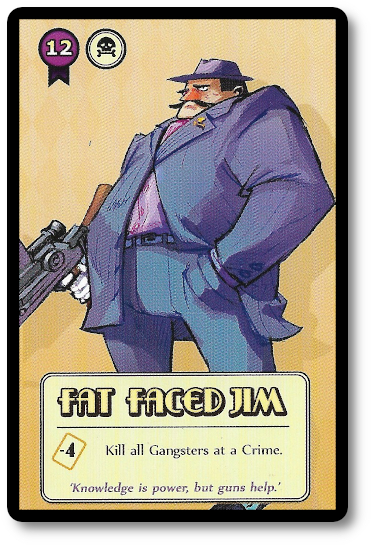 If the player decides to end their turn now, they draw one Resource card from the Resource pile and add it to their hand of cards. Their turn is now over and the next player in turn order sequence now takes their turn starting with step one noted above.

If the player decides to continue their turn, they will attempt to commit a crime using the Gangsters in their Headquarters. This is done by first drawing a Crime card from the Crime pile. The player can now decide to attempt it or “pass”. If they pass, the Crime card is discarded and the player’s turn is over. They do not get to draw a Resource card. The next player in turn order sequence now goes starting with step one noted above. 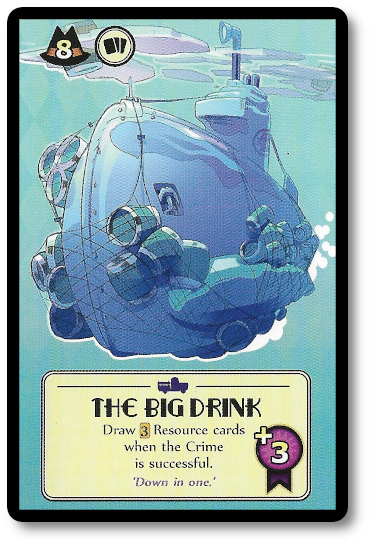 The player now indicates which Gangsters in their Headquarters will be committed to committing the crime. This is done by separating the selected Gangster cards from Headquarters row. The player is welcome to commit more Gangsters than necessary to the crime if they want to play it safe. However, if the player is short on manpower, they can now ask any one opponent if they want to assist. Assisting means another player also commits their Gangster cards in their Headquarters row to the crime, contributing to the total manpower. Only one opponent can be asked. If the opponent accepts they are considered an “ally”. The player and their ally are welcome to haggle how many gangsters each will be providing.

Once the player or the player and their ally agree on who they are sending, the player announces the crime is now “in progress”. The Crime card is placed in the “In Progress” space and the player and their ally can no longer adjust which Gangster cards are committed to the crime (unless a special rule or a card played says otherwise). All other players can now play Influence cards to make committing the crime harder. This can be done in any order and the opponents should feel free to talk to each other in an attempt to spoil the crime attempt. 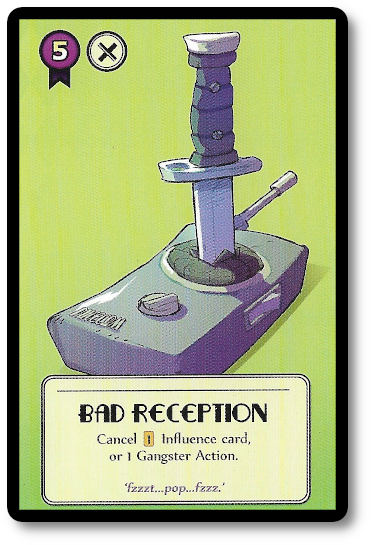 The player’s turn is now over and the next player in turn order sequence now takes their turn starting with step one.

To learn more about Gang Up!, visit the game’s web page.

The Child Geeks enjoyed the game, but continually forgot to utilize and leverage their Gangster cards. According to one Child Geek, “I keep forgetting to use my guys, but I’m still having fun.” As a matter of majority opinion, the Child Geeks agreed that keeping track of the Gangster card abilities was something of a chore and decided not to take it too seriously. Which is both surprising and a bit disappointing, as the Gangster cards have special traits and abilities, giving each special rules, that are fun to play with. Well, that was the theory, at any rate. The Child Geeks thought otherwise, focusing more on the number of gangsters needed for the manpower required for a crime. And that was about it. They interacted with each other very little until crimes were attempted. At which point, they played as many cards as they could to stop crimes. As one Child Geek put it, “The game is fun. I had no idea how easy it was to break the law.” Well…hmm…no. Not what the game is attempting to suggest. The Child Geeks found the game to be fun and voted to approve it.

The Parent Geeks liked what the game was about, but not altogether pleased about how the game was played. According to one Parent Geek, “I think the game wants more involvement with the players then we are doing, but I don’t know why I would. I also don’t like how often I have to keep checking my gangsters. I was all about checking them when we started, but halfway through the game, I stopped caring.” This is because, once a player has enough status, they are free to play a great number of cards. This, in turn, put more cards into play, which means more cards to keep track of and resolve. If the player likes. Which they sometimes did and sometimes didn’t resulting on many Gangster cards having special abilities that were not utilized fully. As one Parent Geek put it, “I think the game is fun but not as light as I thought it would be.” The Parent Geeks, after voting, gave Gang Up! a mixed endorsement.

The Gamer Geeks were, unfortunately, bored. According to one Gamer Geek, “This is a one-and-done game for me. Too much take-that, way too easy to avalanche your opponents, and there is way too much reviewing of the cards. Over and over again we had to look at our cards. Got real boring and tedious real fast.” Another Gamer Geek said, “I like the game’s idea, but feel that the fun value is reduced when the players need to keep track of each card’s special ability. Felt too busy for a game this small.” The Gamer Geeks also didn’t like the fact that a player who was lucky could win the game with very little effort. Specifically noting that a player with a higher amount of status could play every card in the game and continue to play more and more. Yes, the opponents could slow that process down, but not directly stop it. This lead the Gamer Geeks to reject Gang Up!

Gang Up! plays a lot like Munchkin. In fact, all our players, while playing Gang Up!, said as much. There are, of course, differences in the game, but if you are familiar with Munchkin, I think you’ll find Gang Up! to be the gangster themed equivalent. Of course, if you dislike Munchkin, I don’t think this game would give you much joy. That being said, if you really like Munchkin, you might find this game enjoyable.

Like many of our players, I too was frustrated by the seemingly unnecessary (yet required) amount of energy it took to keep track of all my Gangster cards. To a point where when I lost one, I wasn’t that upset about it because it meant the level of effort I had to put into the game to keep track of what I could or could not do was now reduced. Expect the game to last longer than you feel necessary if all the players really want to keep track of everything. Lots of checking and counter checking.

While I don’t think the game is bad, I don’t think it’s great, either. The Child Geeks liked it, but they didn’t play if fully. And knowingly so. The Parent Geeks knew full-well how to play and decide to be a bit lazy with it about mid to end game. The Gamer Geeks got tired of it real fast. All this, to me, suggests that Gang Up! is not a game I would rush to the table. There are games like this, that require negotiation and backstabbing, that are faster, better balanced, and – well – more fun.

Give Gang Up! a try with your and yours to see if the game is right for you. Who knows, you might find that our opinion is criminally inaccurate.