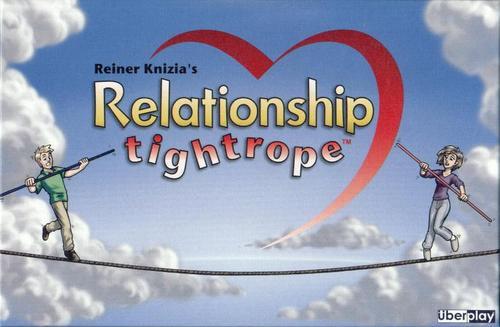 Relationship Tightrope is a light card-based game by Reiner Knizia. In it, players try to maintain a balanced relationship by letting the boy and the girl do equally inappropriate things, like leaving the toilet seat up, forgetting their anniversary, or going on a shopping spree. Keep in mind that the players themselves aren’t part of the relationship; they’re just trying to maintain the balance. I suppose it’s like the role of a nosey aunt or over-protective mother. That’s the theme, anyway. What players really do is try to play cards with numbers on them so that they won’t have any blue or pink sticks by the end of the game. Having sticks of either color indicates an imbalanced relationship, so the player with the fewest sticks wins.

To start the game, the players are dealt a hand of cards that have numbers on them, all unique. Next, a Relationship card is flipped up from a central deck. The Relationship card has two pictures — the “boy” side and the “girl” side, depicting actions of various degrees of inappropriateness, as indicated by the number on the card (1-9). For example, leaving the toilet seat up is just a “3” for the boys, but forgetting their anniversary is a “9”.

After the card is flipped, players take turns playing one card from their hand,  face-up on the table. When everyone has played a card, the player who played the highest number takes blue sticks equal to the number on the Relationship card, and the player who played the lowest number takes that many pink sticks. Now, remember that getting sticks is bad. So, you’ll want to always play a card that’s in the middle. Right?

Well, not exactly. That’s because, if you already have blue sticks, any pink sticks you take will cancel them out, and vise-verse. So let’s say you had 5 blue sticks from a previous round, and you just did something that made you take 3 pink sticks. Well, the 3 pink sticks cancel out 3 of your blue sticks, so instead of actually taking the pink sticks, you discard 3 blue sticks. In this way, players try to balance their relationships, as the power structure (represented by how many sticks the player has) swings from blue to pink and back. This means that if a bad round early on leaves you with a pile of pink sticks, you might actually try to get some blue sticks, in order to get rid of your pink sticks and lower your score.

This game also allows for a subtle bluffing element. If you don’t have any sticks, you’ll want to avoid getting any. The best way to do that is to get rid of your highest and lowest numbered cards. But how can you get rid of those cards without gaining a bunch of sticks? Well, maybe there’s a person who happens to have a bunch of sticks. Let’s say they’re pink. If you know that person will be trying to get some blue sticks, they’ll be playing a high-numbered card. But how high? High enough for you to safely play one of your own high-numbered cards, and get that dangerous number out of your hand? Or are they going to see that you expect them to do that, and do the opposite just to throw you off?

Uberplay has taken a lot of flak for the theme of this game. It’s kind of a poster child for poorly themed games. I, myself, have been responsible for some of that flak. But I think most of the people who’ve come down on it have been more serious gamers, and not the demographic Uberplay was going for.

For my girls, the theme worked great. As a gamer, I can see the elegant rules and the double-guessing side game, and really enjoy this little gem for its surprising depth. It’s a highly versatile game, as it can be played casually but also more intensely if you like the challenge of counting cards and anticipating your opponents’ moves. I can honestly say I hope to play this game on a regular basis.