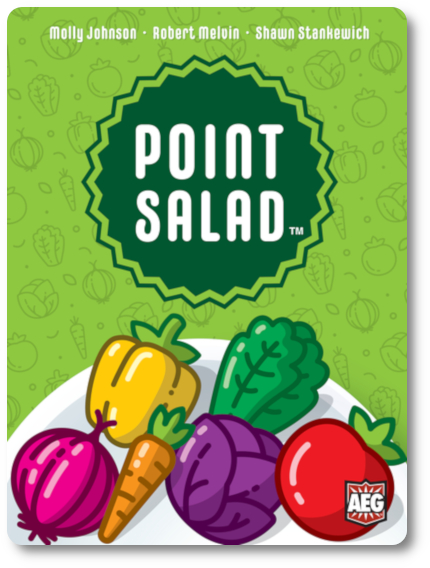 Professional Irish rugby union player, Brian O’Driscoll, said “Knowledge is knowing that a tomato is a fruit. Wisdom is knowing not to put it in a fruit salad.” In this game, players will know a great deal, as all the cards are visible during the entire game. But only those players with the wisdom to see how the patterns start to take shape into points will take home the big salad.

Point Salad, designed by Molly Johnson, Robert Melvin, Shawn Stankewich and published by Alderac Entertainment Group, is comprised of 108 double-sided Veggie cards. The cards are as thick and as durable as your standard playing card. Illustrations on the card, by Dylan Mangini, are colorful and simplistic, providing for easy recognition of what each card represents.

To set up the game, first remove a set number and type of each of the Veggie cards. The number removed is based on the number of players. For example, in a two-player game, six of each Veggie card vegetable types are removed for a total of 36 cards out of the game. However, in a six-player game, the entire deck is used. Place the removed Veggie cards back in the game box. Keep these cards hidden so players have no clue about what points are no longer available in the game.

Second, shuffle the remaining cards and create three roughly equal draw piles in a row with the point side face up. Each Veggie card is double-sided. On one side is the vegetable that is being represented in the game. On the other side are the points unique to that specific card. And this is an important point to make. In the game, there are six types of each vegetable (tomato, onion, pepper, lettuce, carrot, and cabbage) and each card has its own scoring. The scoring noted on the point side of the Veggie card does not specifically relate to the veggie side. 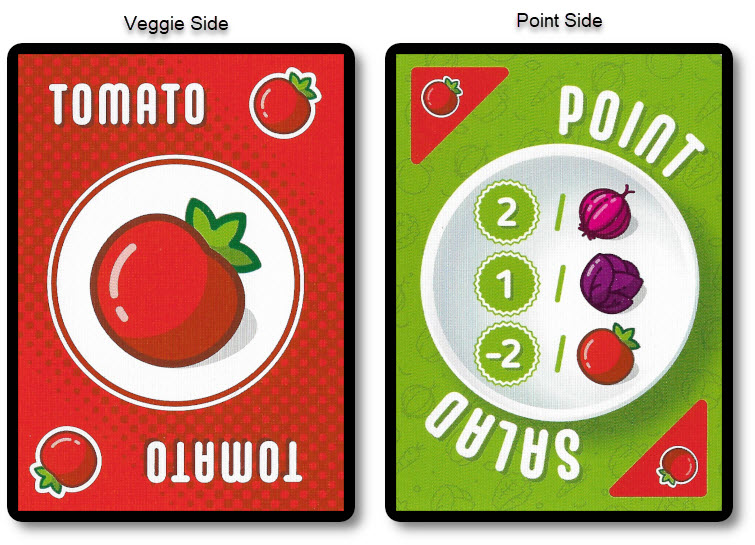 That’s it for the game set up. Determine who will be the first player and begin.

Point Salad is played in turns with no set number of turns per game. A player’s turn is summarized here.

The first thing the player does on their turn is draw one Veggie card with the point side face-up or any two Veggie cards from the Veggie Market. When the cards are drawn, do not change their facing. That is to say, if you draw a card that shows the veggie side, it should remain so. The same goes for a card with the point side facing up. The drawn cards are placed in front of the player on the table. This area of the table directly in front of the player is referred to as the player’s tableau.

This concludes the player’s turn. The next player in turn order sequence now takes their turn starting with step one noted above.

The game ends when all the Veggie cards have been drawn. It is now time to calculate each player’s score.

The player with the most points wins!

To learn more about Point Salad, visit the game’s webpage.

The Child Geeks have always enjoyed card drafting and set collecting games and Point Salad proved to be no exception. What the Child Geeks liked most about the game is that everything they needed to know was always right there in front of them. The challenge was to determine how best to use it. According to one Child Geek, “I like how many different ways you can use the cards. I always know how many points I could get and find it fun to see if I can get more.” Another Child Geek said, “I still don’t like eating my vegetables but I’d play this again even if vegetables and carrots are yucky.” When the last bite was chewed and points calculated, the Child Geeks agreed that Point Salad was a winner.

The Parent Geeks are also a fan of this type of game and jumped right into it. Set collecting and card drafting games all follow general rules. Learn one and it makes learning others all the easier. As such, the Parent Geeks had no problem learning this game and teaching it to others. As one Parent Geek said, “An entertaining game that is easy to learn, fun to play, and challenging to win. I really liked it.” Another Parent Geek said, “I like how you can switch your approach to scoring cards in the game without upsetting your overall points too much. Some really interesting choices to make that kept me thinking. Great stuff.” When all the votes were in, the Parent Geeks agreed that this little game was delicious.

The Gamer Geeks weren’t so much impressed with the game as they were just pleased in general terms. According to one Gamer Geek, “I’ve been playing games long enough to see games like this a lot. I am still entertained by them. A simple approach to playing and multiple layers of complexity to scoring. A fun game I’d welcome to the table as a filler or when playing with non-gamers.” Another Gamer Geek said, “A solid game. Good stuff going on with the scoring which made for interesting choices throughout. Each time I played I found different corners to explore. The game never felt old or predictable. My only concern is that I always feel like I might have not calculated my points correctly, possibly loosing due to a math error.” Scoring can be a bit tricky at first, but it becomes intuitive fairly quickly. As was the vote by the Gamer Geeks who agreed that Point Salad got their approval.

Point Salad isn’t breaking any new ground here, but that is OK. The game is solid on the foundation on which it was built. After having played it many times, I still think it feels fresh and interesting. The game is easy to approach and easy to teach. The only aspect of the game that will throw players for a loop is the scoring. Expect the first couple of games to take longer than feels necessary when calculating points, but do take the time to think it through. Because cards can be scored multiple ways, it is important to consider all the different possible sets that can be made.

Don’t be fooled by the game’s simple approach to gameplay. There is a lot of depth here. Multiple ways to build sets in the game which is further defined by the cards collected to determine points. Throw in the ability to flip cards over to create additional sets with points always being visible and you have a game that feels much deeper and competitive than what you would expect. Indeed, this is a game where the players have their hands on the salad bowl at all times and there is no element of luck to be had. Players win or lose due to their skills, not random outcomes. It generates a lot of energy at the table, especially for those players who like a good amount of competition.

Do play this little gem when time permits. While a salad has never filled me up, I always left the table playing this vegetable game feeling delightfully full.