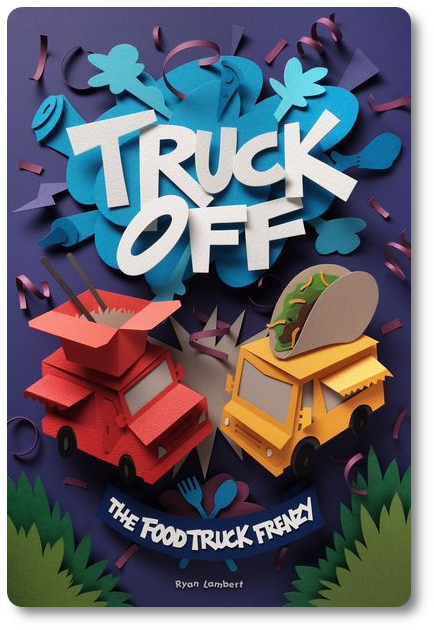 American businessman and philanthropist best known for his commercials for the Wendy’s fast-food restaurant, Dave Thomas, said “What do you need to start a business? Three simple things: know your product better than anyone, know your customer, and have a burning desire to succeed.” In this game, each player is a restaurant entrepreneur. You have a dream, a vision, and a goal to be the most successful food truck company in your area. But you have competition and the venue is fierce. Only the most business savvy (and a bit lucky) will keep their company afloat.

Truck Off, designed by Ryan Lambert and published by Adam’s Apple Games, is comprised of 36 Food Truck tokens, 72 Action cards, 24 Daily Specialty cards, six Venue tiles, six Venue dice (in the variety of four, six, eight, 10, 12, and 20), 72 Money tokens (in different values), 12 Game Play tokens, one Round Tracker card, and one First Player token. The cards are as thick and as durable as your standard playing card. The tokens are made of thick cardboard. The First Player token is made of wood and is cut in the shape of a food truck. Illustration by John Ed de Vera are colorful and stylized, giving the Food Truck tokens and cards a distinct look.

Special note of geek appreciation on this point. The “Gaming Con” Venue tile’s matching Venue die is a twenty-sided die (loving referred to as a “d20” by geek culture). In addition, the artwork for the “Gaming Con” Venue tile is an illustration of the main entrances to Gen Con in Indianapolis, considered one of the biggest gaming conventions in the world today. As it so happens, this entrance/exit point to the convention is also the location where many of the food trucks park and open their side doors for business. 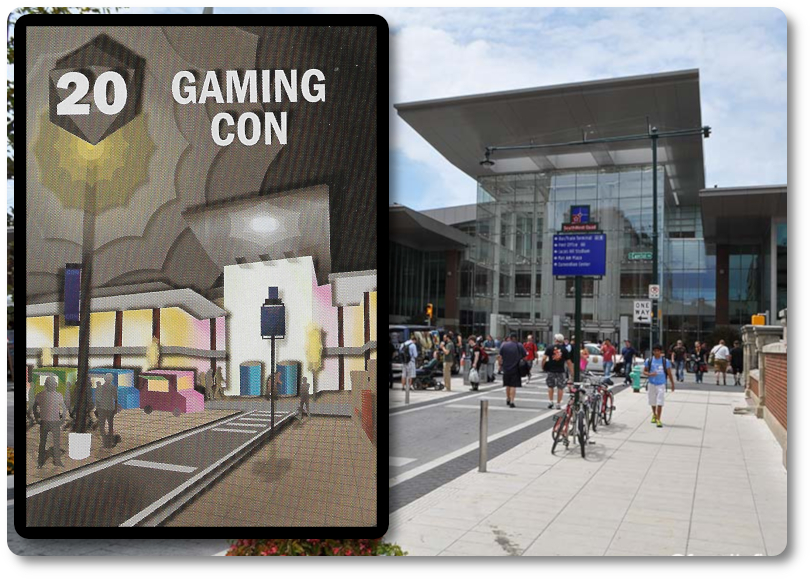 Third, players now look through their Actions cards and agree on two that are removed by all players from the game. The game rule book provides suggestions on what Action cards should be considered based on the group’s game play preference. Removed cards are returned to the game box. All players must remove the same number and type of Action cards.

Fourth, separate the Money tokens into separate piles based on their value.

That’s it for game set up. Determine who is the first player, giving them the First Player token, and begin.

Truck Off is played in rounds and turns for a total of five rounds. A round of game play is summarized here.

Each player selects two of their Food Truck tokens they will assign to a venue. This is done in secret. Each Food Truck token has a number value that matches a Venue tile number value. This pairing determines where the player will be sending their food truck in hopes of making money. 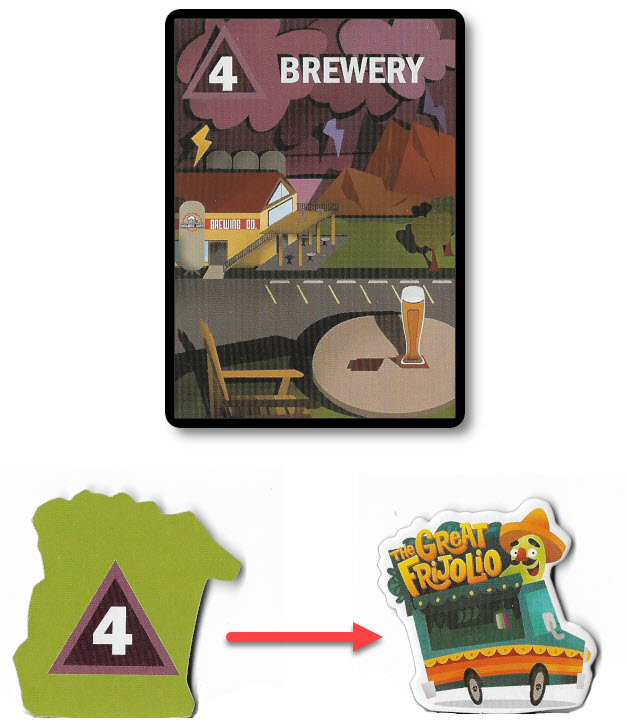 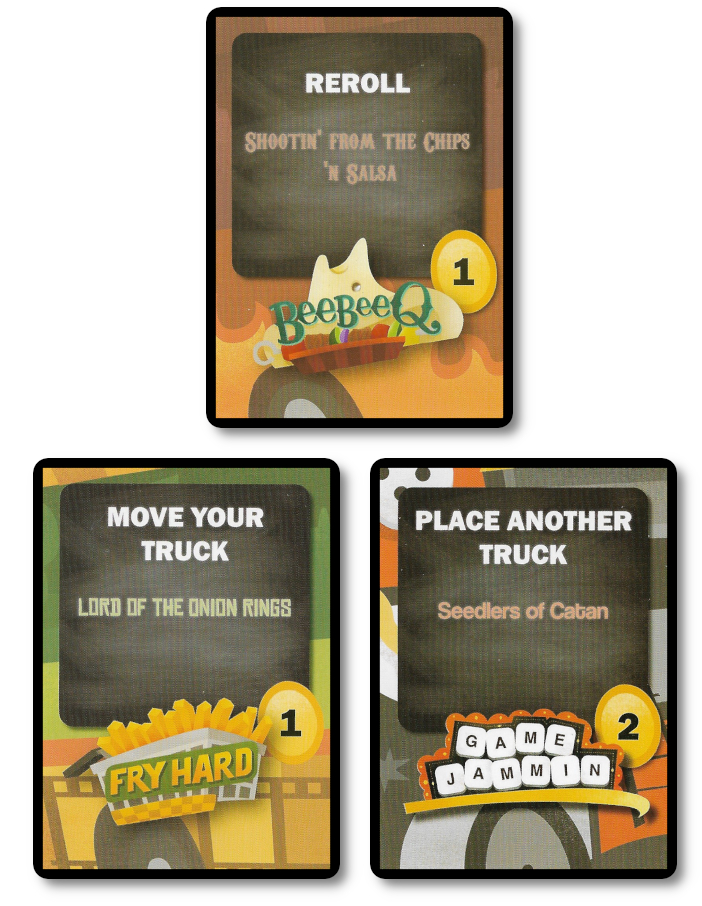 Each player has the same number and type of Action card. What makes each unique is the food truck theme. Everything from westerns, action movies, and even geeky gamer culture is represented. I love it when designers and artists put this level of detail into their games. No real contribution to the mechanics of the game, but it certainly improves the game play experience!

Starting with the current round’s first player, one Action card from the player’s hand is revealed and optionally resolved. That is, if the player likes, they can reveal an Action card and discard it without resolving its action. After the Action card is resolved (or not), it’s discarded.

Actions provided by the cards are as follows:

Action cards are played, one at a time, until all players have played their Action cards. It’s very likely that one or more players will resolve more Action cards than others because they elected to play more Action cards in the round. If a player does not have any Action cards left to resolve, they are skipped and the next player in turn order sequence goes.

After a Venue tile is resolved, the Food Truck tokens located at that venue are collected by their owning player.

After all Venue tiles have been resolved, the First Player marker is passed to the next player in turn order sequence. The next round of game play now begins. Make sure to activate any Venue tiles that were shutdown during the last round. Keep track of the number of rounds of game play using the Round Tracker card.

After the fifth round ends, players determine their final score by adding any collected Money token values to the Money values on any remaining Action cards. The player with the highest score value wins the game.

Game Variants and a House Rule 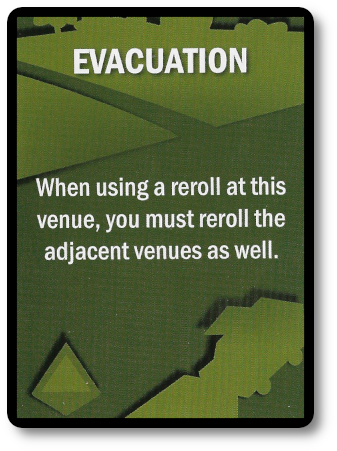 While Truck Off is best with three or more players, it can be played with only two. A third “fake” player is added, however, ensuring that the game has enough moving tokens to keep the two “real” players occupied. This third “fake” player is referred to as “Auto-Play Barry”. The game play is subtly different and is comprised of only four rounds instead of five.

We added a house rules that awarded the remainder of the payout that would normally be lost. Instead of it being carelessly discarded, any remainder is awarded to the player with the most Food Trucks at the Venue tile. If there is a tie, the remainder is discarded.

To learn more about Truck Off: The Food Truck Frenzy, visit the game’s web page.

The Child Geeks had a wonderful time with this game, quickly learning how to play it and jumping into the fun. According to one Child Geek, “I really like this game and it also makes me hungry. In the summer time, my dad and I like to go to different food trucks at the fair. This game made me smile with all my happy memories.” Another Child Geek said, “I like how each food truck company has their own slogans and commercials. I think the game is a lot of fun!” All the Child Geeks agreed on two very important points. First, and most pressing, they all agreed that Truck Off was a game they enjoyed playing. Second, and little more than of side note of interest, they all agreed that “street tacos” were the “best tacos”.

The Parent Geeks also enjoyed the game, both with their family and with their peers. According to one Parent Geek, “This is the perfect kind of game for my family and friends. Easy to understand rules, enjoyable game play, important but light decision making, and a fun theme. I couldn’t be more pleased.” Another Parent Geek said, “Great game. Fun and fast. Makes me yearn for warmer days and weekends where I can take my family to the local brewery, enjoy a few, and eat some great food.” The Parent Geeks were also tickled with the game’s subtle humor, making special note that this level of detail in the game further enhanced their enjoyment. The end result was that all the Parent Geeks fully endorsed the game, finding it to be a tasty activity that left them satisfied.

The Gamer Geeks were, of course, more critical of the game, but Truck Off found a place in their hearts. According to one Gamer Geek, “The game has a great mix of hidden information, player interaction, and randomness to make it a very enjoyable experience. I would play this again as a filler without hesitation.” Another Gamer Geek said, “The game does a great job of offering just enough information to the player to make some poor assumptions and put the hurt on their opponents. I felt the game was well-balanced, fast, and had the right depth of game play expected. No complaints.” All the Gamer Geeks were happy to have Truck Off at their elitist table and warmly invited it to return.

I am most pleased with this game. It scratches several itches for me. First, I am always looking for a game that is easy to teach. Truck Off is very easy to grasp. Our youngest and most inexperienced players were able to quickly understand the game’s flow and how to obtain objectives. Second, the game play is light enough to make it an easy one to put on the table, but provides enough game play depth to make it worth putting on the table in the first place. Third, the game’s theme is one everyone recognizes and frequently sparks different conversations of food truck adventures enjoyed by the players. Including some stories where a food truck experience ended in a bathroom travesty. Great time. The game play, I mean. What happened to my friend after eating those extra hot chicken wings is a travesty, both for his lower intestines and the plumbing.

This small game doesn’t pack a punch so much as it unloads the fun. I have yet to sit down with any player and not have them walk away with a smile. Best of all, you don’t need to be a fan of food trucks or even know what they are to get into the game. The theme is there, but not a mandatory component. If you are looking for a game that is fast to get to the table and challenges all the players just enough to make them feel full, do take the first opportunity to play Truck Off: The Food Truck Frenzy.