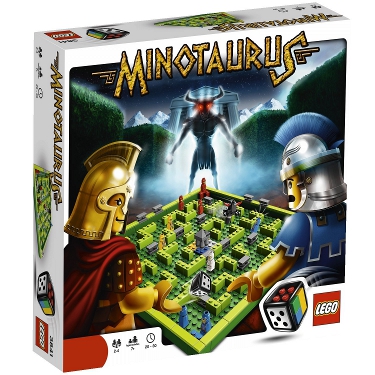 In Minotaurus, each player controls three “heroes” who must race to make it to the center of the labyrinth where a secret temple awaits and is their only means of escape! But the dreaded Minotaur also lives in this labyrinth and wants to do nothing more than hunt down the heroes and scare them away! Adding to the difficulty is the ever shifting and changing labyrinth landscape! A clear passage will suddenly be blocked, a dead-end becomes a doorway, and a safe path could lead to certain doom! The players will need luck, skill, and wit to be the first to the center! It’s a race to the finish line with a monster hot on the player’s heels!

The game, like all LEGO games, is comprised entirely of LEGO pieces that you must build before you play. The rules to build the game are easy to follow and provide a fun opportunity for you and your little geeks to work together. Expect about 10 to 15 minutes to build the game from scratch. After that, only minor corrections are needed to reset the board for game set up.

Game set up is a simple affair. The Minotaur goes in the center of the labyrinth. The hero pieces are placed in the corners that match their color (blue heroes go to the blue corner, white heroes to the white corner, etc.). Lastly, the labyrinth itself needs to be reset. There is a very handy die cut template that comes with the game that you can use to very quickly add or remove blocks where necessary. Simply place the die cut over the board and shift the pieces where required. Once the game board is set, decide which player goes first (game instructions suggest the youngest player) and pass them the dice. The race is on! 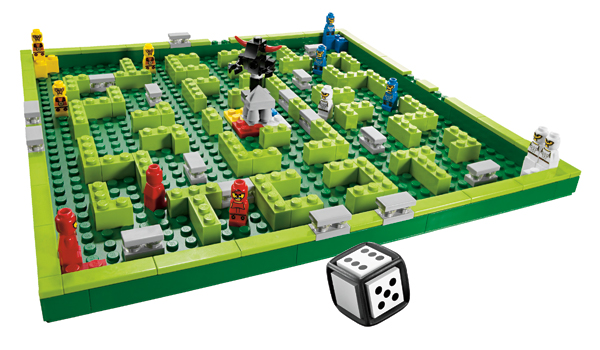 On a players turn, they will roll the custom six-sided die. Depending on what is rolled, different actions are taken.

Four out of the six sides of the die will have a number value (values 3 through 6). These numbers represent how many spaces a single hero can move. What hero moves is up to the player, but only one hero can move per turn. Having three heroes at the player’s disposal at any one time will allow the player a number of options. The only other limitations to movement are the hero must move horizontally or vertically (never diagonally), they cannot jump over or move through walls, they cannot occupy the same space or “stand” on top of another hero, and they most certainly cannot occupy the same space as the Minotaur! Additionally, heroes cannot move through other heroes or the Minotaur. This means a hero can potentially be used to block a passage!

Two of the six sides will have a solid color. In the base game, these colors are black and grey.

If the color on the dice is black, the player moves the Minotaur up to 8 spaces. Like the heroes, the Minotaur cannot jump over walls and must move horizontally or vertically (never diagonally). However, if the Minotaur lands on a hero, that hero immediately must go back to their starting area! When that happens, the Minotaur must also return to its starting area. Heroes located on the center space around the secret temple that matches their color are safe and cannot be targeted by the Minotaur.

If the color on the dice is grey, the player may shift one piece of the the labyrinth. This is done by taking any of the grey wall pieces and placing that piece anywhere in the labyrinth. The only rule that must be followed when placing a wall is that the player starting routes can never be fully blocked. In other words, you cannot box another player in. There must always be an exit and a path to the center of the labyrinth.

The victory condition for the game is different depending on the number of players.

Gotta be honest with you, folks. This one is a no brainer. LEGOs + mythical monster + chance to stick it to Dad? They might very well have had my little geeks in mind when they created this game! Still, nothing is certain, so let’s make sure we are covering our bases.

This game is visually interesting which will make it immediately appealing to my little geeks. The fact that they get to move the monster and shift the board will also be a big hit. Lastly, the simple roll-and-move mechanic will not be too demanding or throw any real surprises at them.

That’s the good stuff, what about the bad?

I am concerned about how my little geeks will handle being sent back to the starting area if the Minotaur lands on them.  I can guarantee they will be upset; I know I would be. If they take it too hard, they will dislike the game and walk away from it, either physically or mentally. I am always sensitive to the fact that my little geeks do not yet have the emotional intelligence to clearly understand that a bad move or play in a game does not mean they are being attacked or are dumb. I struggle with this a great deal as a parent. In fact, the Father Geek staff wrote an article on this very point, as it was a topic clearly on all our minds.

After building the game and explaining the rules, my little geeks said the following:

“Cool game! I am going to get to the center first and make sure the Minotaur lands on you!”

“Look out! I am going to be the first to teach the Minotaur some manners!”

Looks to be a good start! Both of my little geeks are excited, ready to go, and I think I might be in trouble. They both have this strange look in their eyes and are grinning at me, wickedly. Uh-oh…

Wow, what a game! We greatly enjoyed it and were all invested (somewhat heavily) in the experience. And what an experience! Ups and down, close calls and significant disasters! Several times, the game was stopped so everyone could cool down, discuss their feelings, and then come back to the table. At long last, we were able to finish the game. While it was a good deal of fun for my little geeks, as an adult, I felt drained. So much drama!

And yet, it really was a good time. Both of my little geeks enjoyed it and wanted to talk about it the next day and the day after that. Their desire to actually “play” the game has been trumped by their greater excitement of creating their own labyrinths and rules, however. This is actually an exceedingly fantastic  turn of events and I can’t wait to play their labyrinths by their rules. By doing so, they get to be creative and I get to teach them the subtle art of “fairness” and “balance” in game design. Bonus!

Game wise, this is a pretty fun experience. Don’t expect to burn your brain on it, though. The game was intended for a younger audience and the game plays as such. Choices are limited, the luck factor is fairly high, and the goal easily reachable with little effort needed other than some simple logical thinking, good decision making, and patience. The most challenging portion of the game for your little geeks will be knowing what piece to move and getting over the fact that they might be sent back to the beginning. Truthfully, I think they will feel better about it once they send someone else back to the starting position, but do expect some hard feelings if your little geeks are sensitive.

LEGO games are highly customizable. For example, the instruction manual provides several different rule variants (jumping over “hedges” by replacing the #3 with a green square) to make the game more challenging. I have even seen others create much larger labyrinths for epic play!  There is even a thriving mod community for LEGO games where others can share their ideas on improving, changing, or even making a brand new game. When you get this game, you get more than what is in the box. Add to it with other LEGO pieces, make your own rules, and customize it!

Do try the game. Build it, play it, and then make it better! Your experience with your little geeks will vary, of course, but owning a game that allows you to actively improve it and make it something personal with your children is a fantastic experience few games in this world provide.