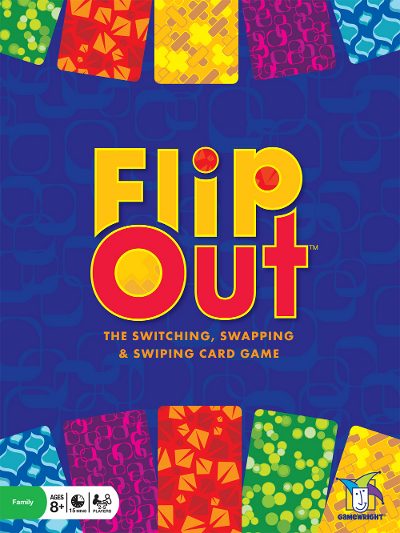 In FlipOut, the players are trying to collect 4, 5, or 6 adjacent same-colored cards to score points. The players get to use their own cards as well as the other players’ cards, too. In this game, it’s all about who switches, swaps, and swipes first! Careful timing, logical thinking, memorization and the ability to easily adjust your strategy based on the ever shifting cards you and your opponents have visible is required. Colorful, easy to play, and loads of fun, FlipOut will keep your family at the table demanding more!

The game is comprised of 5 plastic card holders and 90 double-sided colorful cards. All the game components are very sturdy and of good quality. The cards, in particular, are thick enough to warrant some extra shuffling time before the game to loosen them up a bit. It’s not often we recommend bending the cards, but in this case, you really do need to. Father Geek hasn’t seen cards this thick in a long while. A refreshing change to “way-to-thin” typical children’s card games we often see.

The card holders snap together and form a lazy curve that sits sturdily on the playing surface. There is a slot in the middle of the card holder that the cards easily slide into. This is a welcome extra that goes a long way. Little geeks sometimes have a hard time holding cards in their hands while at the same time playing the game (don’t even get me started on Old Maid). The holder lets your little geeks display and play with their cards without the need of a hand full of exasperation.

The cards, as previously noted, are double-sided and colorful with interesting patterns to boot. The colors, nor the patterns, necessarily match on both sides, however. This is intentional and the major game component that sets FlipOut apart from other card games. 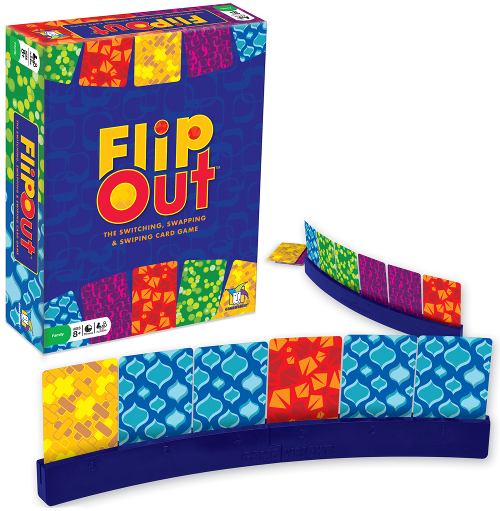 Colorful, sturdy, and simple to play!

Game set up is simple and fast. Honestly, the hardest portion of the game set up will be dealing out the cards, but Father Geek has a special trick to share with you there. The card holders slide together and one is given to each player. You will note that the card holder has numbers 1 through 6 labeled. This is to allow players to ask for specific cards instead of reaching across the table. A handy little solution to help avoid people knocking over card holders or accidentally getting a peek of their neighbor’s cards when exchanging hands.

There is a trick to the cards that deserve special note. Players should only see one side of the cards at any time. The game instructions suggest you carefully remove one card at a time by slowly sliding a card out and up, so you only see the front of the card. Trust me when I say this is an impossability with little geeks. You’ll spend more time fiddling with the cards then playing with them. Luckily, Father Geek has a good solution. Cut the deck in half and face the bottom of the card deck towards you. Then, one at a time, take the card you can see and place it in your card holder. Do this until you have six cards. Simple! Once all the players have their cards, its time to play!

A player’s game turn allows them two actions. The two they take and in what order is up to the player, but it will make all the difference when it comes to winning. With only two actions available to a player, they must logically think out their move and attempt to be as efficient as possible so as to score points as fast as they can. Cards shift position, and even players, constantly. Essentially, this creates a shifting puzzle, but it is not as chaotic or as impossible to manage as it might sound.

The actions the players can take are as follows:

After the player takes their two actions, they immediately draw back up to 6 cards.

When handing cards back and forth, the players need to be as careful as possible to make certain the cards do not flip in the process. For example, if Player A sees a yellow card and replaces it with a blue card, the colors facing that player never shift. Likewise, Player B never sees the other side of the cards, either.

As noted above, there are two ways to score points. Both require you to use a set of 4, 5, or 6 adjacent cards of the same color. If you can score using your own cards, you get all the points. However, you also have the ability to score points using your opponent’s cards! When you do, one card will go to that players and you get the rest. For example, if you score 4 points off another player’s card holder, you keep 3 and your opponent keeps 1. Think of it like payment for services render or, as my oldest likes to say, “justice!”. Scored cards are removed from the game and placed in the player’s scoring pile for safekeeping.

The game ends when any player cannot draw back up to six cards. When this happen, every player may score any 4, 5, or 6 adjacent same-colored cards in their own card holder without moving any of the cards to do so. Once completed, each player counts their scoring pile. The player with the most cards wins and gets an extra big glass of juice.

Colorful cards and easy game play should make this a fun game for my little geeks. My only concern is how my little geeks will handle loosing cards they are trying to put together for points and how they will resolve “analysis paralysis” when they can’t see a good play. I predicte I will have to lend a hand from time-to-time, but that is nothing new, unwarranted, or even unwelcome.

After looking through the box, explaining the rules, and a quick example of how the game is played, my little geek’s first impressions were as follows:

“I like the colors and that there is no hard math.”

“I like the colors and how the cards smell.”

Smell? Sure, why not, and there you have it. Colorful cards, no complex math, and the pleasent odor of color printed playing cards seems to have already provided my little geeks with a very solid and positive impression of FlipOut. Time to play the game and see if my predictions were right!

There is just something about playing cards that is satisfying. It’s right up there with rolling a hand full of dice. Perhaps it’s because there is something tangible you get to hold on to and do something with. Regardless, my little geeks loved the game.  The game was also very well received when I introduced it and played it with adults. There are not many games that can brag they are fun for both little and big geeks.

I liken this game to Memory, and I think it will replace any and all copies I own. In fact, I think FlipOut is a superior game in all respects. Not only is memorization absolutely necessary in FlipOut, but the players must also make logical and critical decisions during their turn to make the best use of their cards (and their opponent’s) with the limited actions they have available to them.

Do expect your little geeks and big geeks to get frustrated with this game, or to be more specific, frustrated with the other players. It is inevitable, but also by design. The game landscape is constantly changing, switching, and flipping. Keeping track of what card is where and owned by whom is a task that most people will not want to take on for the majority of the game. This is to be expected, as there is simply too much information to try to keep track of. But the game does not penalize the player for not doing so, either. On the player’s turn, there is more than enough information immediately available to provide them with good direction on what they should do on their turn.

Analysis paralysis did occur a few times with my little geeks, but I believe this to be caused by being unsure of what actions were available to them and not because there was nothing to do or things were too complicated. Halfway through the game, and my little geeks were playing with confidence. There is a game variant available that provides all the players with three tokens that can be “cashed in” to immediately get anther action on their turn. You might consider adding this game variant when playing with your little geeks until they get used to how the game is played.

This is also a fantastic game for teaching your children colors and patterns. Individuals who are colorblind can play this game, too!The card patterns are unique enough to replace color matching with pattern matching easily.

Taken as a whole, this is a fun little game that will be seeing more of my family game table. It is simple to play, balances player’s abilities very well allowing for little geeks and big geeks to play together, and is challenging enough to maintain the interest of both groups. An excellent game!