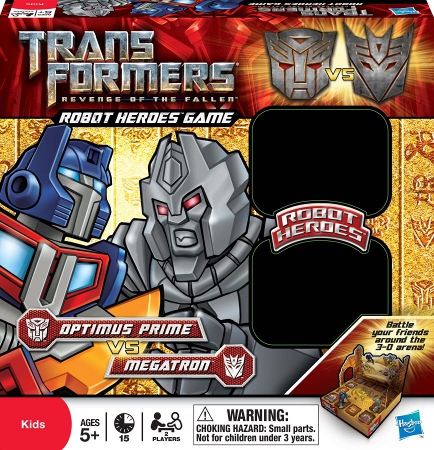 In Tranformers: Robot Heroes Game, one player will take on the role of the brave Autobot leader, Optimus Prime, and the other the evil Decepticon leader, Megatron. The players must time their attacks wisely and only press into battle when they believe their enemy is at his weakest, or they are at their strongest. Failure to do so will mean taking damage and loosing the upper hand, quickly.

The game is comprised of one Optimus Prime playing piece, one Megatron playing piece, two decks of cards (one for Optimus Prime, one for Megatron), a set of six double-sided square tiles to keep track of damage, two six-sided dice, the game board, and a landscape background. All the game pieces are typical Hasbro quality and should last you and your little geeks a long time.

The two decks of cards have either a number value ranging from 1 to 5, a variable value that is decided by the roll of a single six-sided die, or a special attack ability that is unique to the Transformer being played. The special attack cards are considered “advanced” and can be removed for easier play with your little geeks.

The set of double-sided square tiles are used to keep track of how much “damage” a player’s Transformer has taken during the game. The pieces are double-sided and are put together to form a picture of the Transformer with and without damage. The player’s put together the pictures of their undamaged Transformer together like a puzzle. However, as there are only six pieces, this is not time intensive or difficult and can be completed fairly quickly. This can be something of a mini game in itself. One option used by my family is to race to be the first to build their Transformer. The player who wins gets to go first. This is welcome alternative to the standard roll-off with dice to determine player turn order.

The game board sits inside the game box and the landscape background wraps around it. The end result is a solid elevated playing surface that is immediately visually appealing.

The two Transformers playing pieces used in the game are the same as the ones you can purchase from Hasbro’s “Versus” double packs. Each Transformer is somewhat poseable and is made of good solid plastic that is colorful, detailed, and durable. Expect your little geeks to take these playing pieces out of the box to play with and often.

Game setup is fairly straight forward. Separate the two decks of cards (the backs of each card either represent Optimus Prime or Megatron) and pass one to each player. If you are playing the “Basic Game”, remove the four special attack cards. Fit the board in the box and attach the landscape background. Each player gets their six double-sided square tiles and builds their undamaged version of their Transformer. Lastly, the Transformer playing pieces are placed on their starting areas of the board. You are now ready to play. 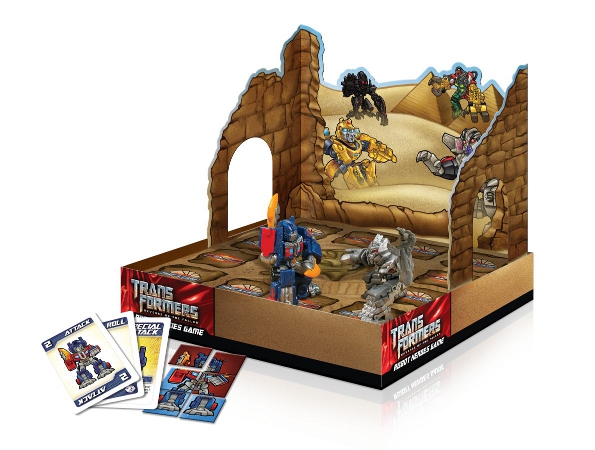 This is what your game board will look like when it is ready to play...EPIC!

Note: The basic game does not include the four special attack cards.

To begin with, each player shuffles their deck of cards and deals themselves three cards face down so the other player cannot see them. This is the player’s starting hand and can be immediately picked up and viewed by their owning player. The first player rolls a single six-sided die and must move their Transformer a number of spaces equal to the die value rolled. The player can decide in what direction they want to move, however, and can move through and land on the other player’s space. Depending on where the Transformer lands, the following next action occurs:

Battling in the game is done in the same way as the classic and overly played card game, “War”. Each player selects one card from their hand and places it in front of them, face down. Once each card is placed, the are flipped and revealed. The player who has the highest card value wins the battle. If the card value says “Roll”, the player takes a single six-sided die and the rolled result is the value of that card. If the card values (or rolled dice values) are tied, another card is played, and so on until only one player has the highest attack value. If one of the two players runs out of cards, the battle is considered a draw and no one wins (or looses) the battle.

If one of the players takes damage during the battle, they flip one of their six double-sided square tiles over. The picture that represents their Transformer now appears to have taken damage!

The advanced game is played exactly the same as the basic game with the addition of the following rules:

Regardless of what type of game you play, the winner of the game is the last Transformer standing! Each Transformer can only take six hits until all of the double-sided square tiles are flipped to the damaged side. Once all six are flipped, that Transformer has lost the battle and the victor get bragging rights for the next hour or so.

It is difficult to find a “combat light” game that can be played by my little geeks. Most combat games are heavy on the math, strategy, and tactics. My little geeks are still learning these Geek Skills which slows the game down and also increased their level of frustration. Since the goal is to have fun and learn at the same time, finding the right amount of fun to tip the scales back from the heavy learning can be a daunting task. I have had success with Heroscape, HeroQuest, and Battleground: Crossbows and Catapults, but these games take some time to set up. Set up time is downtime, and my little geeks quickly get tired of waiting for their old man to get everything ready to play.

Transformers: Robot Heroes Game is the perfect solution. It is very quick to set up and play. There is enough tactics and strategy in the game to give it some substance and the amount of luck based mechanics is kept at a minimum. Best of all, the Transformers used in the game provide my little geeks with that extra special visual component that can only be truly appreciated in miniature combat games.

All the Geek Skills noted in the “The Basics” section are used, but kept light and breezy. Your little geeks, and you, will need to “think” about your moves, but your options are limited meaning you don’t have many scenarios to quickly play through your head when deciding what you will do.  This will keep “analysis paralysis” at bay. But even with the limited number of actions available to you, the player is not cornered or even stifled. The game balance is a perfect 50/50 split between fun and learning, tactics and strategy, risk and reward.

This game was a real surprise and I never would have thought to give it a second glance on the toy shelf. This game is even good enough for me to take it out as a light game between two adult players. With adults, the game is not simpler, but it certainly is more cutthroat. If you can get your hands on this game, I highly recommend it! Fun will be had, and after the dust settles from the rampaging robot battle, you’ll high-five your little geek and be eager to play another game!

The game is pretty good right out of the box, but my little geeks and I have come up with a few House Rules to make the game more enjoyable, challenging, and faster. These rules are also a lot of fun with adults!