iPad – a Toy for Adults or Children? 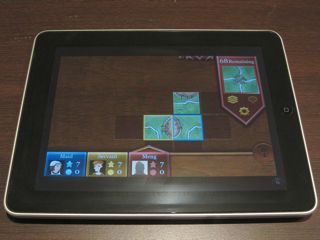 Carcassonne on the iPad

Two months ago, I purchased the iPad on a whim without any real idea why I would need one and today it remains very much a curiosity rather than a necessity. I use it to browse the web and to play some board games: my Android phone remains my workhorse for checking email and keeping track of my appointments. I predict that when a decent Android tablet comes along, I’ll hand the iPad over to my children. (My wife is no gadget freak and I cannot see her wanting to take it over, although for the sake of marital harmony it may be prudent for me to offer her first dibs.)

Do not read on if you are expecting a comprehensive, original or unbiased perspective on the iPad; there is no shortage of iPad reviews to be found elsewhere, even on the narrower issues of its worth as a board gaming platform and its suitability for young children. Mine is a highly personal perspective, YMMV.

Full disclosure first: I am certainly not an Apple fan, indeed, just 12 months ago I would have disparaged the mere suggestion that I might be tempted to by an Apple product. I use Linux, Android and free software as much as possible, and consequently I become frustrated with the far more limited configurability of Apple’s operating system and applications. My transformation from Apple abstainer to reluctant Apple consumer came about because I realised that my employer would reimburse me 100% for two computers to the tune of $6000. (I defy anyone else, given such an opportunity, not to take advantage of it!)

The iPad is a reasonable platform to play face-to-face boardgames, especially those without hidden information, or at least no player-specific hidden information. Many games with concealed player hands are equally enjoyable with open hands. Two other options are to pass the iPad from player to player to maintain concealment (rather clumsy) or to use satellite devices for player hands (exacerbating the vendor lock problem).

These are the board game apps I have on the iPad currently (half of which were purchased during a family vacation to a beach resort, spoiled by constant rain):

There are three major advantages of board game app compared to the original versions: portability, so that if we are at a restaurant waiting for our food to arrive, we can knock out a quick game; automated set-up, so that one can launch immediately into playing (and not have to tidy up afterwards); and the ability to resumed an adjourned game (although without the option of storing multiple saved games simultaneously). Rules enforcement is a minor added bonus. For the most part, AIs are not very strong, so playing against the iPad is no real substitute for finding human opponents.

Everyone “knows” the iPad to be a content consumption device and not a content creation device, hence its massive profitability for Apple in providing a gateway for users to spend even more money. I tried recently to type a blog entry on the iPad and gave up after two sentences. Using the soft keyboard for longer than 60 seconds is a form of torture that deserves international sanction; while using a bluetooth keyboard defeats the original purpose of choosing an iPad over a netbook. While I agree that the iPad is not a content creation device for most adults, a child’s needs are different. For instance, there are several paint apps, including free ones, transforming the iPad into an souped-up Etch-a-Sketch.

As an e-book reader, the iPad is adequate. I find the screen too bright for comfort after about 30 minutes of continuous reading, even when set to white text on a black background. I haven’t used e-ink devices such as the Kindle, which are said to be easier on the eyes, although there’s no question that the color display of the iPad has its advantages, say, for reading comics or medical textbooks. iBookstore offers only free (Project Gutenberg) titles outside of the U.S., leaving Amazon and the Kindle app as the e-book outlet of choice for Aussie readers.

My five-year-old son is learning to read and I have placed a few books and word games on the iPad to provide some variety for him. These are not intended to replace other reading or teaching materials (particularly “real books”) and parental supervision is advisable even though interactive programs can tell him whether he’s right or wrong. Finally, my children also enjoy using the iPad to look over family photographs (synced from iPhoto) and to watch movies, although only as a viewer of last resort (for example, when it’s raining on vacation).

Whether to purchase an iPad for your children comes down to four questions:

If you answered yes to all the above, then go ahead and purchase the 16GB WiFi only version (I can’t imagine why children would need 3G). In terms of restricting user access, it is straightforward to disable YouTube and the App Store so that neither you nor your children receive any “nasty surprises”. And then be sure to post back here about your experience!

5 Responses to iPad – a Toy for Adults or Children?