Don’t Break the Ice is a light strategy game that challenges players to make critical decisions. Hand/eye coordination is essential as the players are required to physically strike pieces, repeatedly, until the initial piece struck has become dislodged and falls away from the game.

The game is set up by squeezing the ice blocks into the ice tray. Tension on all four sides of the tray keep the ice blocks in place. The plastic polar bear is inserted in a small slot in the large ice block and serves as a reminder of what ice block to not hit.

The assumed correct game setup is to put the large ice block in the center of the tray, but this is incorrect. The large ice block can be placed anywhere in the tray the players like. This allows for different configurations and experimentation that keeps an otherwise nonsensical game interesting. 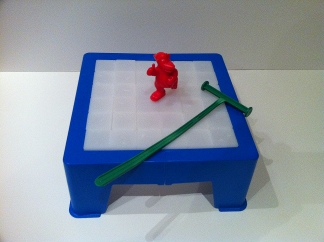 Once the ice tray is filled, players take turns striking one of the ice blocks with the plastic mallets until it is dislodged from the tray. Even if other ice blocks are dislodge during the player’s turn, their turn does not end until the initial ice block they tapped has become dislodged.

This game is contradiction. You are told “don’t” and then told to “do” over and over again. The required physical action of breaking the ice is in direct conflict of the goal of the game, which is to not break the ice.

My two oldest boys love playing this game and think it’s ridiculously entertaining to smack the bejesus out of the thing. I have taught them the rules and they follow them…for the most part.

To be fair, they play the game very well and can go a few rounds of really thinking about their moves. After a couple of games, things take a disastrous turn for the polar bear. While the first couple of games will last up to 10 minutes, games 3 and 4 usually only last about a minute as my sons hammer the ice hard and fast. The polar bear barely has enough time to think before he is under the icy waters of doom. (Glub. Glub. Glub.)

But why do I like this game? What about it appeals to me as an adult?

Nothing. There is nothing about this game from an adult perspective that is noteworthy. The strategy and tactics are almost null from my years of previous experience with other games, the physical act is exceedingly simple, and the game goal easy to obtain.

And yet, this game appeals to the child in me. Part nostalgia for a time in my life when games were very straight forward and part reckless abandonment. This is especially true when I play the game with my sons. I have played the game a few times with adults and it falls flat. Play it with kids and you’ve got yourself a party.

I would not recommend this game to anyone who doesn’t have a child. This is not one of those games that must be bought in order to complete your board game hoarding. But, if you have kids and are looking for a game that is straight forward, fun, and very interactive, then Don’t Break the Ice is for you.