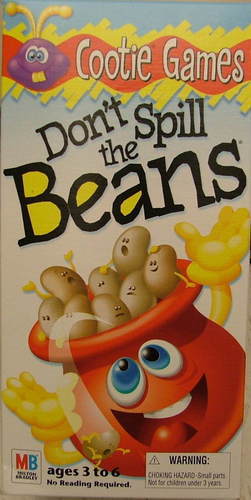 Don’t Spill the Beans is a very simple dexterity game wherein the players take a small pile of beans and attempt to balance them on a very tipsy little pot. The goal is to be the first player to put all the beans in your pile in the pot without tipping it.

Like the game, a player’s turn is also very simple. Take one bean, place it carefully on the very top of the pot, and hope it doesn’t tip.

If the pot does tip, all the beans that fall are collected by that player and added to their bean pile. Play continues until one player has run out of beans or patience for the game and walks away in a huff.

This is a very easy game and doesn’t require any reading, memorization, or math skills to play. This makes it a perfect distraction for your youngest children and a great way to introduce them to logical decision making and risk vs. reward.

However, its greatest strength (ease of play) is also its greatest weakness. There isn’t much to this game, and because of this, the game will be played quickly a few times and then left behind for more interesting activities (like watching dust particles in a sunbeam).

In addition, the game is broken. The bean pot is too top-heavy. Expect to only be able to add about 8 to 10 beans before the pot starts to tip at an alarming rate and beans begin to cascade down. I consider this a game flaw as it doesn’t allow for more balancing and critical decision making on the players part regarding where they should place the beans. The high turnaround with the bean collection also slows down the game. 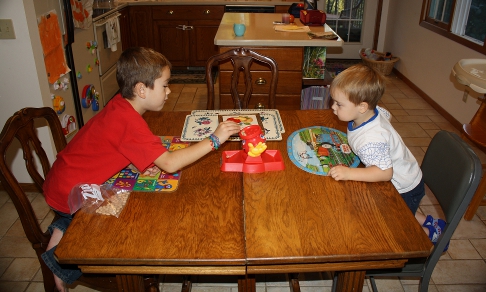 The two older brothers face-off for an EPIC BEAN BATTLE!

There is hope, however. This broken game is very easy to fix and to improve.

All you need to do is open the top part of the pot and drop in a few coins. This creates a heavier bottom and a more balanced pot. Be certain to not over balance it and make the pot too bottom heavy. You still want the beans to fall, just not as often or as easily.

This solution provides two very important features that makes a game I wouldn’t recommend into something that has some real value and becomes Parent Geek approved. 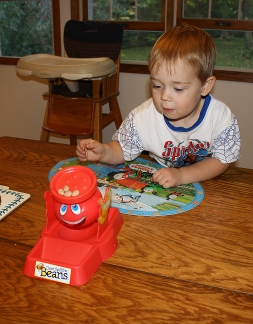 Silently considering his next bean placement

First, the coins allow the game owner to fix the overly top-heavy problem, making the game less difficult if necessary. Second, you can adjust the level of difficulty very easily with more or fewer coins, which allows you to scale the game relative to the player’s ability, age, and attention span.

Again, not much to this game, but to be fair, the game wasn’t trying to be anything other than a light children’s game to being with. It succeeds in its original goal, and with slight modifications on the parent’s part, the game can be improved and modified for different audiences.