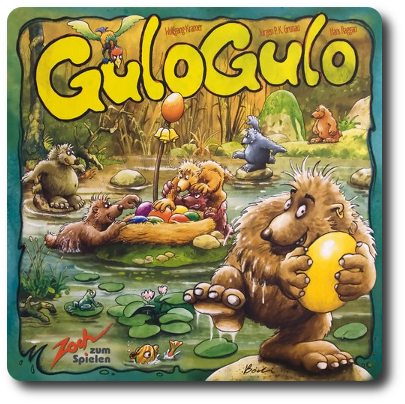 Gulo Gulo is children’s games published by Rio Grande Games. This game allows children and adults to compete on a relatively equal footing and, in my opinion, is suitable for children aged up to 6 years. 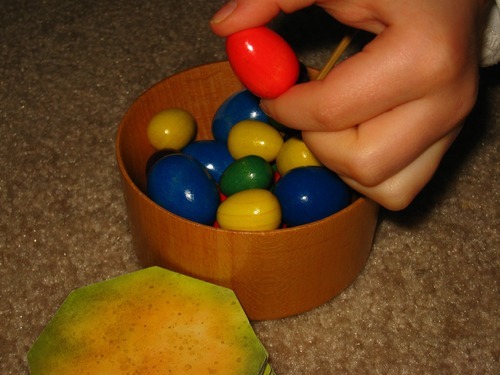 This is a dexterity game with a distinct advantage for young children: small fingers are a definite plus! Each player attempts to move his colored plastic piece (a figure that resembles a polar bear more than a wolverine) forward by extracting from its nest a wooden egg of a specific color.The attempt fails, causing the piece to be moved backwards rather than forwards, if a different egg falls out or if the “alarm” – a top-heavy stick perched perilously among the eggs – is triggered. As more eggs are extracted, the task becomes more difficult, although the nest is reset after each unsuccessful attempt. The aim is to be the first player to get to the end of the path and then to extract the purple “birthday” egg.

From the brief description above, it is not apparent that optimal play depends in small part on deciding which color egg to attempt to take from the nest. Not only does the number and position of eggs influence the decision, but also the position of colored tiles on the path. Ultimately, however, judgment plays only a minor role in this game, although it has been interesting for me to observe how my own children’s judgment has matured over several iterations of this game. Also, as there are two purple eggs, and since the “winning margin” is often slim, we usually allow the runner-up the satisfaction of drawing the second egg and therefore becoming a joint winner.

My children are very good at dexterity games, and this is one where we, the parents, have a real disadvantage with our larger hands. So my children have certainly won their fair share of games between them. Since this is a winner-take-all style of play, though, it has led to tears. As I mentioned in a previous article, learning to lose with grace is an important life skill, and the topic has been discussed many a time as a consequence of this game. I am proud to report that both of my children have since learned that winning is not everything.

This is a fun game that is easy for non-gamers to pick up. The age ceiling of 6 years is perhaps ungenerous, since I have seen children as old as 12 years enjoying these games at conventions, but indicates the shelf-life in my own family. As far as the lower age limit is concerned, clearly Gulo Gulo‘s wooden eggs are a choking hazard, so orally fixated children should not be left unsupervised! We have played Gulo Gulo since my daughter was 18 months old, without issue (just be sure to watch your kids).

At one stage, this game was part of our daily gaming diet, but it hasn’t hit the table in the last 6 months, due to other, somewhat deeper games being available. I imagine that this game might be played again if other children were to visit, though.

Adults will find this game challenging, without requiring a big time commitment. I can vouch for the durability of the components – which remain in near-pristine condition although the box has almost fallen apart – and the bright colors and cartoon artwork have great visual appeal. This is a game we shall be keeping in our library for a few years yet.