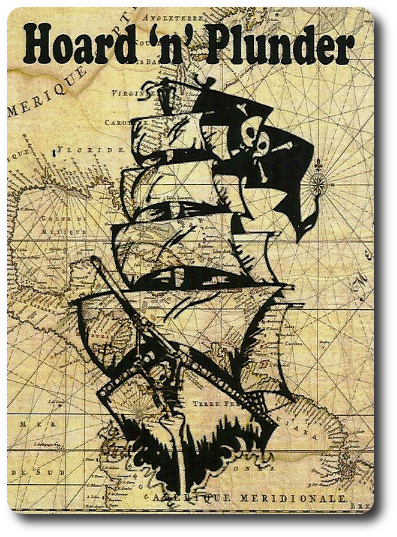 Finding the treasure was the easy part. Keeping it is going to be a challenge! You are a greedy pirated surrounded by other greedy pirates and you all have one things on your mind: GOLD! You’ll have to be smart and sneaky if you want to claim your share of the booty! Take what you can! Give nothing back!

Hoard ‘n’ Plunder, a self-published game designed by Mike Pierce via the Game Crafter, is comprised of 29 red Plunder cards, 32 green Defending cards, and 35 yellow Treasure cards. All the cards are as durable as your standard playing card. The illustrations are simple, but do a good job of representing the card’s actions and use in the game.

To set up the game, first shuffle the entire deck of cards as thoroughly as possible and deal 7 cards to each player, face-down. Place the remaining cards in the deck face-down in the middle of the table. This is the draw deck for the duration of the game. Leave room next to the draw deck for a discard pile.

That’s it for game set up. Time to hoard and plunder! Yaar!

It’s all About the (Treasure) Bling

Hoard ‘n’ Plunder is played in turns with no set number of turns per game. A player’s turn is summarized here.

The first thing a player does is draw a card from the deck. In Hoard ‘n’ Plunder there is no such thing as a “bad card”. Everything a player draws will be useful, but not necessarily playable. If the draw deck is exhausted, pick up the discard pile, shuffle it, and place it face-down to create a new draw deck.

Step 2: Play a Card or Draw Another Card

There are three cards a player can play on their turn. These are any Treasure cards, any Plunder cards, and 1 very special Defending card, the “Treasure Chest”. 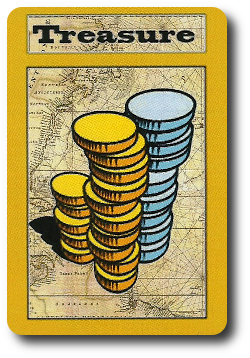 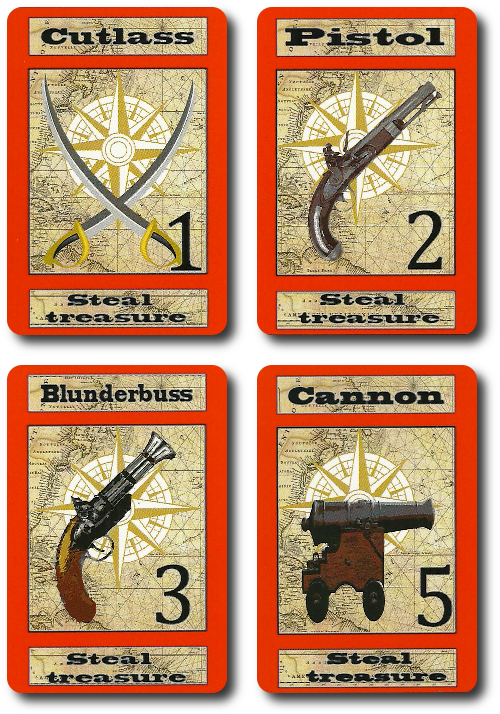 The green “Treasure Chest” Defending card rewards the player with more cards. It’s played to the discard pile and then the player draws 3 cards from the draw deck. This little card is what you will be praying for during the game, as your hand of cards will be quickly diminished. More cards in your hand means more choices in Hoard ‘n’ Plunder. 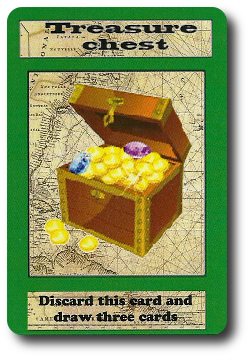 Finally, if a player has neither a Treasure, Plunder, or “Treasure Chest” card to play, they may draw 1 more card from the draw deck. If they can play the card they just drew, they should do so now. They do not get another chance to draw a new card.

Regardless of what card is played or if any cards are played at all, the player’s turn is now over. The next player in turn order sequence now goes.

“Block” Defending cards reduce the total number of Treasure cards that are taken from the player’s Treasure Hoard (rounded down). 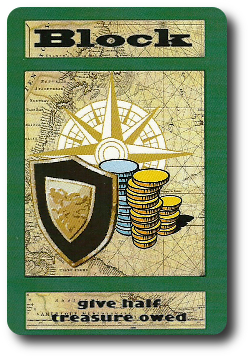 “Bribe” Defending cards allow the player to discard the “Bribe” Defending card and any other card from their hand to the discard pile to block their opponent’s attempt to steal their treasure. Any other card can be discarded, but the player MUST have a card to discard before they play “Bribe”. Otherwise, the “Bribe” does not block the Plunder card. 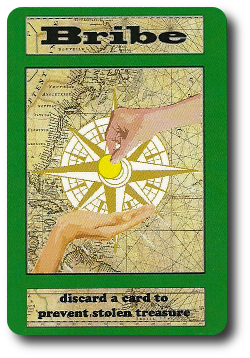 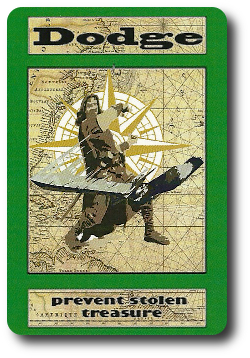 Note: The “Treasure” Card” is technically a green “Defending’ card, but it does not block any would-be thieves. Nor can it be played out-of-turn.

The game ends when one player has a total of 10 or more Treasure cards in their Treasure Hoard.

To learn more about Hoard ‘n’ Plunder, visit the game’s web page on the Game Crafter.

There wouldn’t appear to be much to this game. It actually reminds me a great deal of other pirate themed card games, but simpler. The most complicated aspect of the game looks to be keeping enough cards in your hand to defend and steal treasure. But simple games have a tendency of surprising our groups, as they sneak in some interesting decision making and light fun.

Teaching Hoard ‘n’ Plunder is best done with a quick open hand and then getting right into the game. There are only 3 types of cards and the most complicated decision a player will have to make it when to use them. Which will be pretty obvious throughout the majority of the game. Timing isn’t much of an issue, as players will be either reacting out-of-turn or taking 1 action on their turn. What actions or reactions they take will depend on what cards they have in their hand. So, again, pretty easy decision making. If you don’t have a card that allows you to do something, you can’t do that something. Admittedly, a bit overly simplified, but that’s the gist of it.

And so, after teaching Hoard ‘n’ Plunder to my 2 oldest Child Geeks, I asked them their thoughts on the game so far.

Let’ set sail for adventure and see if we find Hoard ‘n’ Plunder a profitable exercise or it leaves us feeling sunk.

The Child Geeks enjoyed Hoard ‘n’ Plunder, but it didn’t keep their attention past a few games. None of the Child Geeks showed any indication that they were confused or not having a good time, but it was clear that no one (regardless of age) liked having their treasure taken. One Child Geek tried an interesting strategy by keeping his Treasure cards in his hand until another player had a good number of Treasure cards already out in their Treasure Hoard. According to him, “I’m going to let the other players steal his treasure instead of mine.” A great idea, but it didn’t work. More treasure on the table simple means more treasure to steal. One Child Geek said, “I like the game, but I don’t think there is much going on other than just stealing treasure.” Yes, exactly. That’s pretty much the game. Another Child Geek said, “I like this game because I can take everyone’s gold! GOLD! GOLD! GOLD!” In the end, all the Child Geeks voted to approve Hoard ‘n’ Plunder. 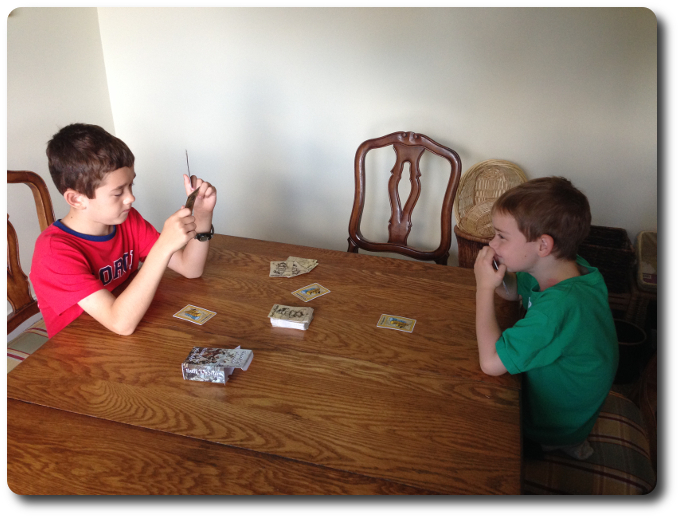 Little did I know that my two little geeks decided to team up and steal my treasure!!!! NO CHRISTMAS FOR THEM!

The Gamer Geeks found Hoard ‘n’ Plunder to be unimaginative with a pasted on theme. According to one Gamer Geek, “The game works, but that doesn’t mean it’s a good game. Nor should it suggest that it’s a bad game, I suppose.” Another Gamer Geek said, “There is nothing wrong with this game if you are a kid. If you are an adult, this game is going to bore the hell out of you.” One Gamer Geeks thought about it a bit and said, “The problem I have with this game is that I don’t have much say beyond what cards I have in my hand. I don’t care for games where my choices are limited based on random hand draws.” And finally, one Gamer Geek said, “This game is way too crazy long.” All the Gamer Geeks voted to reject Hoard ‘n’ Plunder.

I personally agree with both the Parent and the Gamer Geeks. I very much enjoyed playing Hoard ‘n’ Plunder with my kids, but found the game to be too light as an adult game. What the game is trying to do is just be simple and fun. On those two points, I give it two thumbs up. It’s easy to teach and easy to play, but it’s not easy to love. Its simplicity leaves the game feeling a bit shallow and any semblance of tactics or strategy is exceedingly loosely hinged on the cards a player may or may not have in their hand. The game also tends to overstay its welcome when the Treasure cards are not coming out fast enough, leaving players bewildered and wondering what it is they are supposed to steal to win. The end result is a game that anyone can play, but not everyone is going to tolerate.

If you are looking for a pirate themed card game that plays fast, can be taught in a few minutes, and will most certainly appeal to families and non-gamers, do take a look at Hoard ‘n’ Plunder.