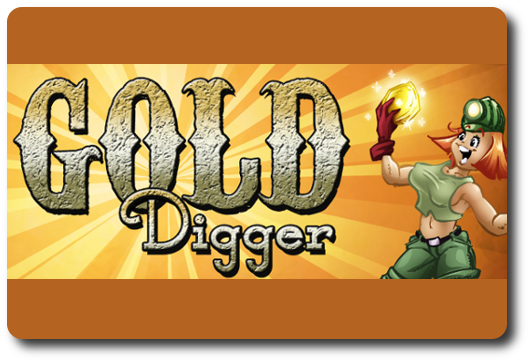 Digging for gold continues to be a full-time profession for some who wake up everyday believing they are going to strike it rich. There is “gold in dem dar hills” to be sure, but where to dig? A team of gold hunters will shovel a lot of dirt before they find anything of value, let alone gold. Still, the work and risk is worth it because when they find what they are looking for, all their money troubles disappear forever.

Gold Digger, designed by James Ernest, Mark Rosewater, and published by Cheapass Games, is comprised of 40 cards. The cards are as thick and as durable as your standard playing card if you buy them or you can download the game and make your own copy.

There is an abundance of breasts, cleavage, and side boob in this game. Also gold nuggets. The majority of cards, illustrated by Phil Foglio and Cheyenne Wright, portray very well-endowed young women showing a lot of midriff and digging for gold in tight outfits. It’s all in fun and a play on words (as in a “Gold Digger” who marries an older individual for their money), but gads, erect nipples the size of walnuts! I don’t consider myself a prude by any means, but none of the Parent Geeks or myself felt comfortable putting this game in front of our Child Geeks. As such, there will be no Child Geek perspective of the game even though, ironically, the game could be easily played by a 7-year-old.

To set up the game, shuffle the cards and place them in the middle of the playing area, face-down.

Players now take turns. On a player’s turn, they will draw 1 card at a time, revealing it by placing the card face-up. A player can continue to draw cards or opt out of drawing any more cards on their turn.

The cards the players want to draw are the Miners. These busty lasses have point values ranging from 1 to 3. If the player opts out of drawing more cards on their turn, they keep all the Miners they drew, setting them aside in a pile. 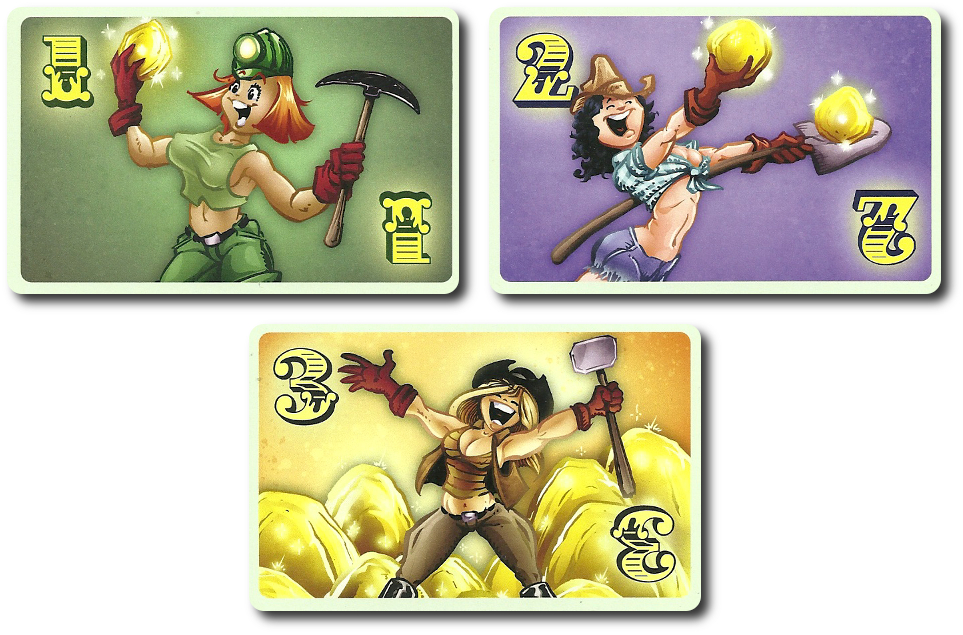 Seriously! Look at the size of those nuggets! 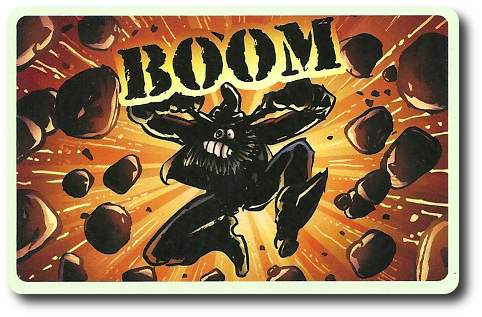 The game ends when all the cards in the deck have been drawn. The winner of the game is the player who collected the most points (not Miner cards).

To learn more about Gold Digger, visit the game page where you can download and make your own free copy of the game.

The Child Geeks didn’t play this game due to the inappropriate card artwork. Since the artwork in question is on all the cards (except the Big Boom), the game was unplayable.

The Parent Geeks laughed at the artwork and had a good time socializing while playing the game. Gold Digger takes little thought other than the occasional critical kind. Pushing your luck with little information to go on (especially if you aren’t paying attention to what cards the other players are pulling) becomes little more than a guessing game. It was always obvious which Parent Geeks were paying attention between turns and which were gabbing. Those who watched the other players almost always made better decisions. Then again, those who gabbed did just as well at times, but their good fortune was based on luck. According to one Parent Geek, “Even if you pay attention to the cards, there is still an element of risk. I like that.” Another Parent Geek said, “This is the kind of game you can drink wine with, east some crackers, and play without much thought. That’s a good game for my friends and I when we want to socialize.” When the games were over, the Parent Geeks approved Gold Digger, finding it to be a simple game that was good for groups and adult gatherings. But not for the kids.

The Gamer Geeks thought Gold Digger was way to simple and broken. According to one Gamer Geek, “If you take a dice game that does the same thing,  you always have the same odds and level of risk right from the start. Not the case in this game. The level of risk and odds changes after every turn. That’s not bad, I guess, but it does make it impossible to play smart unless you count the cards. And let’s be honest, the game isn’t worth that kind of effort.” Another Gamer Geek said, “All you can do is pull a card and then make a decision that really isn’t all that important. I didn’t hate the game, but I don’t see any reason to play it again, either. All of the Gamer Geeks felt the same way, finding Gold Digger to be a game they just couldn’t get along with, preferring to leave it with the Parent Geeks.

Gold Digger has a small number of cards, making it easy to count the cards if you really wanted to. But that, my friends, would be putting way too much additional effort into a game that was always meant to be taken lightly. Gold Digger is, in many respects, like the games Zombie Dice, Trophy Buck, and Martian Dice. Except it’s a card game and not a dice game. It presents the player with the same push your luck scenario, but instead of having endless possible outcomes, the longer the deck is played, the more obvious the future outcomes will be. This would suggest that the player is never really facing a level of unknown risk. When the game starts the risk is very low since all the cards are available to play. About mid game, the player will know how many Miners and Big Booms are left to make reasonable decisions. By the time the game is over, the only reason the player would take a serious risks is because they were unlucky during the majority of the game and need to catch up on points.

Doesn’t sound very difficult and it isn’t. This is a game you could almost play in your sleep if it weren’t for the fact that there is legit critical thinking involved. But that’s it. The game is little more than draw a card. The same could be said about the dice games Gold Digger is comparable too, as well. These games are designed to force a player to think and balance their current understanding of risk versus reward. Fun stuff if you are looking for a light game, but the very definition of boring if you are looking for a game with serious chops.

Gold Digger is perfect for quick game playing sessions, game fillers, and when you are out and about with friends waiting for a drink or a food order. Do give it a try if you like fast games with explosive outcomes and cheeky scoring. Just don’t dig too deep on this one, as you won’t find much. Still, it’s free. The only thing  you might lose is time, which may or may not be precious to you.