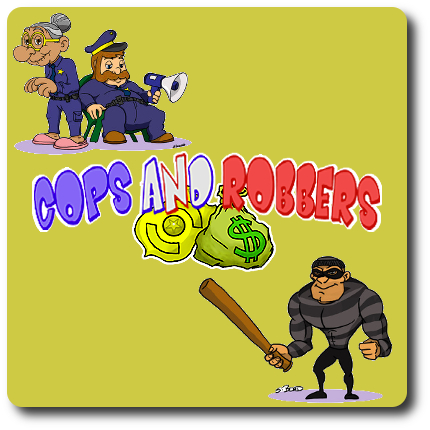 Be it cops and robbers, dogs and cats, or even Decepticon and Autobots, opposites not only tend to attract, but also repel. In this game, one player will take on the role of the police force protecting a small town. The other player will take on the criminal element who is on the look out to steal some loot. It’s a game of cat and mouse (oh, there’s another) with lots of cash and jail time up for grabs.

Cops and Robbers, designed by Steven Bond and published by the Cheeky Bear Games LLC via the Game Crafter, is comprised of 50 Cop cards, 50 Robber cards, 24 Event cards, 32 Location cards (double-sided), 1 Hideout card, 1 Police Station card, 35 Loot coins, 12 Arrest meeples, 12 standard six-sided dice (6 red, 6 blue), and 2 Player Reference cards. The cards are as thick and as durable as your standard playing card. The Loot coins are small plastic coins that are made to look like American quarters.

Getting Ready to Go Out On Patrol

To set up the game, first sort the cards into their separate decks. When completed there should be a Cop, Robber, Event, and Location deck. Shuffle each deck separately and place face-down.

Third, place the dice the Loot coins off to one side of the game playing area.

Fourth, flip over 4 Location cards, placing them in a single row. Have the player acting as the Cop sit on one side and the Robber on the other.

That’s it for game set up. Time for a little law and disorder.

Cops and Robbers is completely card driven with the exception of a few roles of the dice. Each of the card types are summarized here.

The Unit cards represent the individuals involved in either of the factions. For example, the SWAT team is a Unit card for the Police and the Car Thief is a Unit card for the Robber. Unit cards have a number value that is used either to escape the law or enforce it. Additionally, Unit cards will have special abilities and rules that are summarized under the Unit card’s name. Where applicable, icons will appear that match to certain Location cards. Placing cards at locations with matching icons will give the player a bonus with the Unit card. 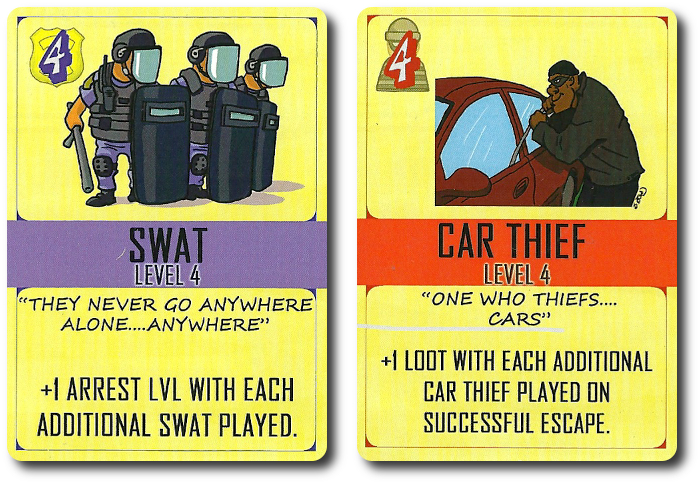 The Item cards give Unit cards a bonus. For example, the Flood Light gives the Police a bonus and the T.N.T. gives the Robber a bonus. Sometimes Item cards are necessary in order to secure a Location card. Regardless, they can always be used to better a player’s odds as they are always beneficial. 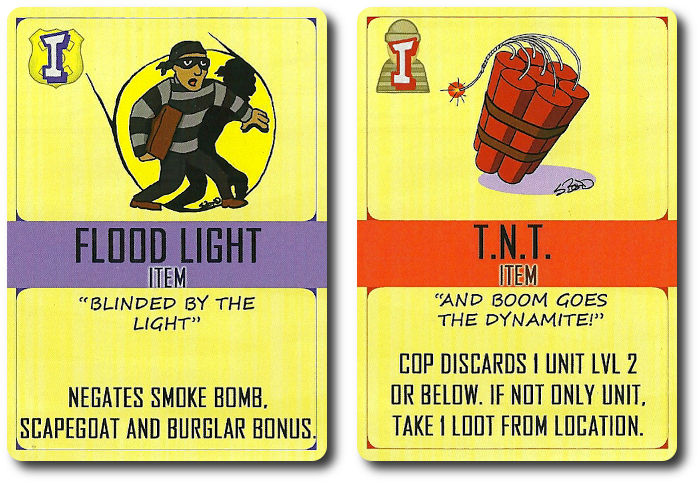 The Action cards change the rules of the game, giving an opponent a temporary penalty or the player a temporary boost. They can be played at anytime during the game, but using them only makes sense at certain times during the game. For example, the Auxiliaries for the Police would be useful when needing a strong force to make an arrest and the Robber could make use of the Ol’ Switcheroo if they rolled poorly, but their opponent didn’t. 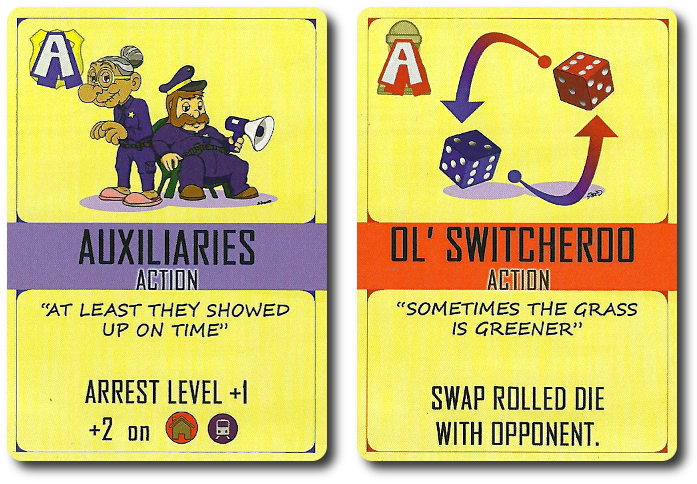 The Event cards are special awards given to players who secure a Location card, robbing it blindly or locking it down. Event cards will either give a player a permanent bonus or a temporary one. Regardless, Event cards are powerful and don’t count as a card in the player’s hand. However, a player can only ever hold 3 at any particular time. 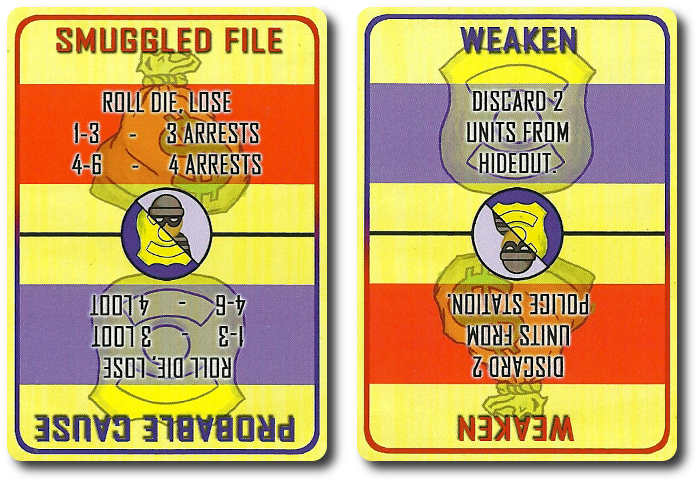 The Location cards represent the different buildings and business in the city. Unit and sometimes Item cards are placed at the Location cards in hopes of helping the player successful loot them or protect them, depending on what side of the law the player is on. Each faction has a special space for their cards, the loot to be robbed (or secured) is also placed on the Location card. 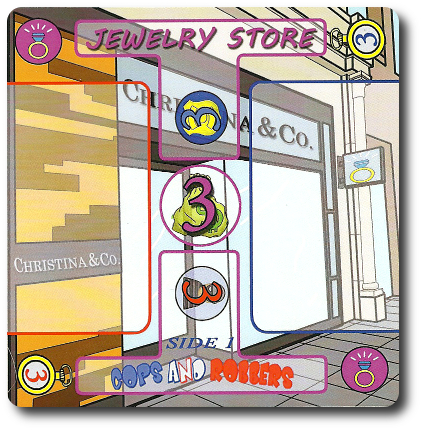 The base of operations for each player holds their winnings. Certain Event cards allow players to “raid” their opponent’s base, taking what they have earned and claiming it for themselves. Players can defend against such an attach by assigning Unit cards to stay at the base location. Doing so will certainly protect their assets, but will also make them a bit weaker at the other locations.

Just Another Night in the Big City

Cops and Robbers is played in turns with no set number of turns per game. The Robber always get to go first, but each player has the same turn steps. A player’s turn is summarized here.

The first thing a player does is draw up to 7 cards, drawing from their respective decks.

If any Location card has a die on them that was placed during the previous turns by the player, reduce the number of the dice by -1 signifying a passage of time and the amount of time left necessary to occupy the location.

If any of the dice values reach zero, remove the die and the Location card. Then draw 1 Event card, adding it to the player’s hand. If playing as the Robber, take the Loot coins and place them on the Hideout card. A new Location card is then drawn and placed.

Any number of actions can now be taken and in any order, but the actions available are based on the cards in the player’s hand.

Add 1 Unit card (max 4) to the player’s respective base of operations. This card is placed face-down and helps protect the headquarters or hideout of the player.

If the player wants to, they can swap the Unit card located on their base with any other Unit card in the player’s hand.

Each Location card has a defined maximum and minimum number of Unit cards each player needs to place if they want to occupy it. The number values are not used when counting. A player must place a number of cards equal to the number. These cards are placed face-down.

If the player has any Event or Action card during their turn, they can play them at anytime and when it makes sense to do so.

As soon as a Location card has both Cop and Robber cards, the location is considered in conflict. The Police are attempting to arrest the Robber’s Units and the Robber is attempting to escape. Conflict is resolved by both players taking their cards and revealing them, adding up the number values and taking into account any Unit and Location card bonuses. Then players can play Event or Action cards, followed by rolling 1 die each. This number value is added to the Unit card values and bonuses.

Justice Has One Good Eye

The game continues until 1 player wins.

To learn more about Cops and Robbers, visit the game’s webpage at the Game Crafter.

The Child Geeks had fun with the game. More times than not, the preferred role was the Robber, although I’m pretty sure the Cop is an easier role to play as. Needless to say, the Child Geeks liked the idea of robbing banks and jewellery stores and liked busting criminals just as much. According to one Child Geek, “I don’t know which I like more. Fighting crime or committing crime.” Another Child Geek said, “I don’t really feel like I’m a police officer or a criminal, but I like the game. It’s fast and fun.” The terms fast and fun were used a lot by the Child Geeks when describing the game. When it was all over, the Child Geeks all voted to approve it.

The Gamer Geeks liked a number of things that were going on, but found the overall execution of the game to be a but cumbersome and clumsy. According to one Gamer Geek, “Here’s an example of what I mean by clumsy. After playing cards to the location, you flip them over and count the values. No problem. Then you play Event and Action cards and count them up again. Alright, we’ve now counted twice. Now we roll the dice. And here we count a third time. That’s a lot of counting.” Another Gamer Geek said, “I think it’s funny how so many are seeing racist stereotypes in this game. I see them, too, but I don’t think the game is making a big deal out of them. Still, it’s not a game I’ll play again because I don’t find it interesting.” When all the votes were counted, the Gamer Geeks decided to give Cops and Robbers a miss.

Whether intentional or note, the game feels strangely racists. The majority of the Robbers are minorities, shown breaking into cars and picking wallets. Worst yet, “bonus arrests” are black meeples. I don’t believe for a moment that it was the designer’s intent to put minorities in a disparaging light, but it was visible (and questionable) enough to be noted by all our Parent Geeks and Gamer Geeks. An unfortunate situation, as I am certain it effected the groups’ final endorsements.

Game wise, I found Cops and Robbers to be pretty much just OK. I didn’t feel challenged and the biggest decisions I had to make were what Unit cards to spend on a Location. The answer was always simple,  however, and also highly influenced by what cards I had in my hand. It’s not that I never felt like I needed to make decisions. It’s that I never really felt like I was making important ones. All my choices seemed clear.

The game is mostly about hand management, bluffing, and hedging your bets. I liked these aspects of the game and thought the game designer did a good job of making it obvious why a player would want to spread themselves out. What was not obvious was when it was necessary to fight hard for one location versus another. If you lost, you just lost a location. It didn’t hurt much until the last portion of the game when things started to get tight.

If you like games where what you are after is plainly visible to your opponent, but not your true intent, then do try Cops and Robbers. The only thing for certain is the goal. How you get there is another story.