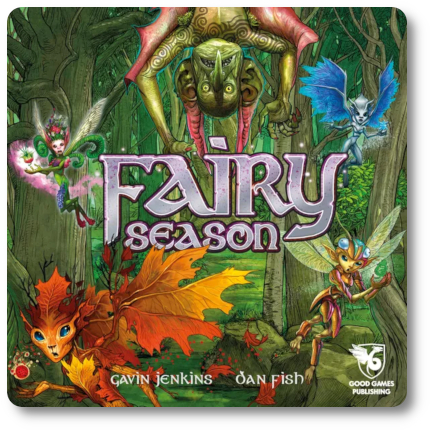 Scottish novelist, playwright, and creator of Peter Pan, Sir. James Matthew Barrie wrote, “Every time a child says ‘I don’t believe in fairies’ there is a little fairy somewhere that falls dead.” Yikes. In this game, whether you believe in fairies or not is inconsequential. Your only goal is to protect and save. To do so, you must follow the rules of nature and outthink the goblins (and your opponents). Sound easy? It’s not. This game might not require you to believe in winged sprites, but it will need all your attention if the fairies are to survive.

Fairy Season, designed by Dan Fish, Gavin Jenkins, and published by Good Games Publishing, is comprised of 90 cards. The cards are as thick and as durable as your standard playing card. The illustrations by artist Sean Andrew “Muttonhead” Murray are bright, colorful, and whimsical. They do an excellent job of adding to the game’s thematic element, depicting each of the different fairies and goblins the players will be contending with.

To set up the game, first take all the cards and shuffle them together.

Second, deal five cards to each player, face-down. This is the player’s starting hand. Each player should look at their cards but keep them hidden from their opponent’s until played.

Third, place the remaining deck of cards face-down in the middle of the playing area. This is the draw deck for the duration of the game. Leave room for a discard pile.

There are several cards in the game. Each is summarized here.

The majority of the deck is comprised of Faries that are associated with one of the four seasons. They have a number value between one and eight. Each Fairy also has a special ability to either allow the player to draw a card from the draw deck or place a card from their hand to their Stash. 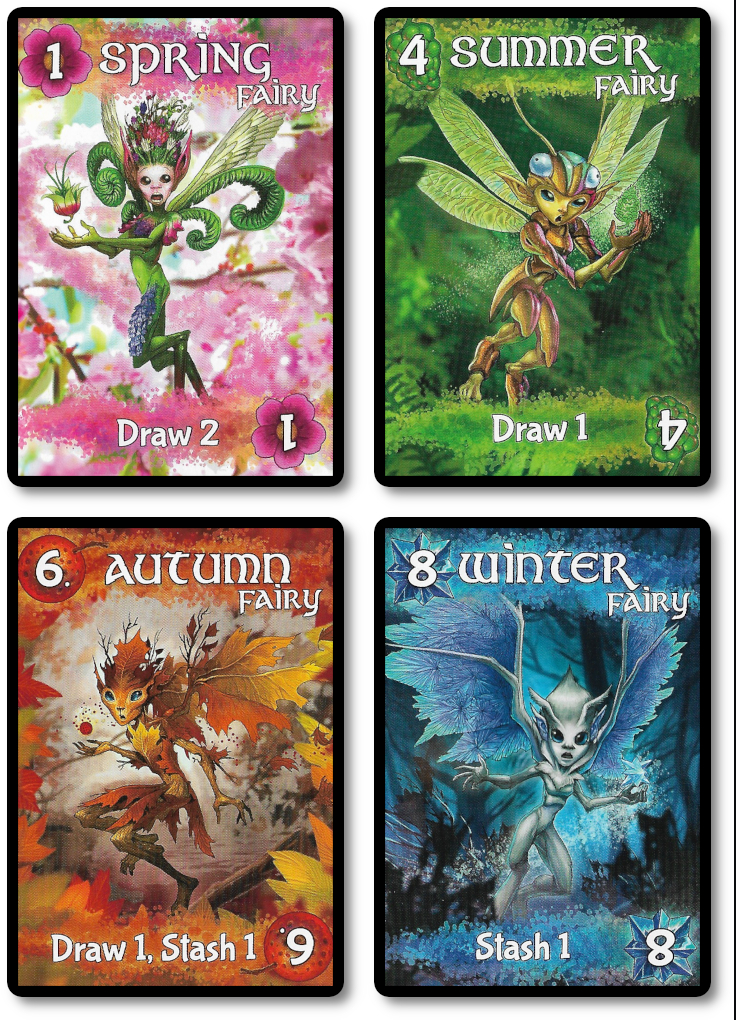 There are four Royal Fairies in the game. These are special cards that allow the player to negate a Trap card. While they do not have any special abilities, they are worth points at the end of the game. 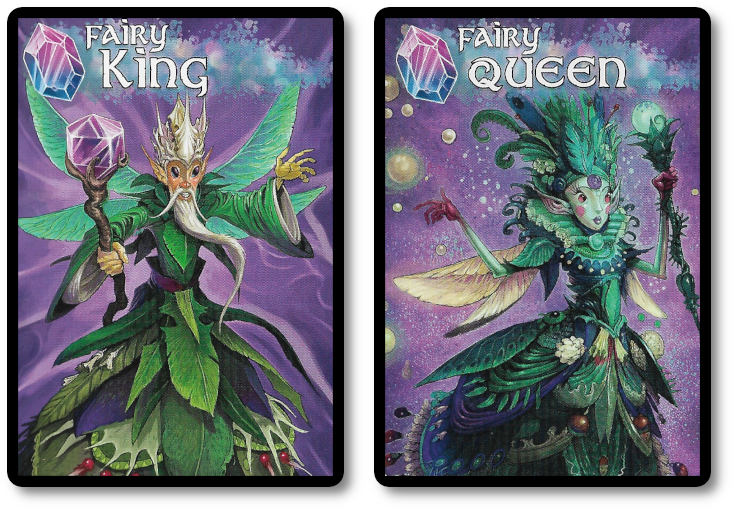 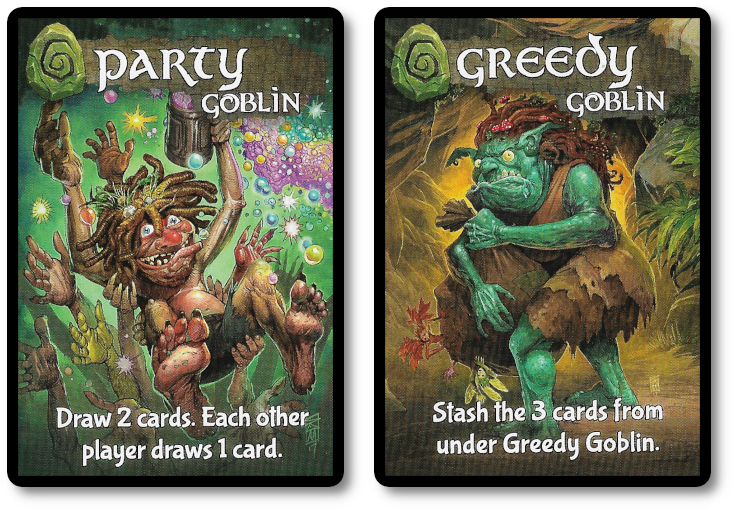 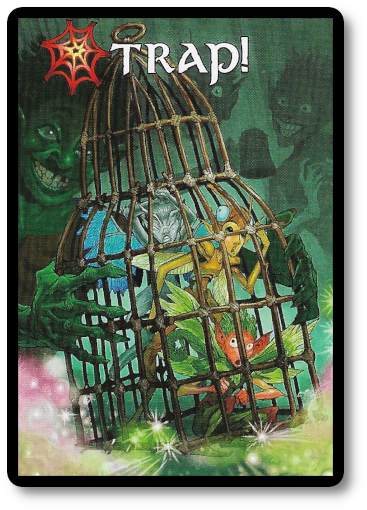 Fairy Season is played in turns and hands with no set number of hands per game. A typical hand is summarized here.

The first player of the hand chooses a card and plays it face-up in a discard pile next to the draw deck. This discard pile is referred to as the “Swarm.” Any card can be played at this time, although it’s suggested for new players to consider using a “Spring” or “Summer” Fairy card to ensure some gameplay semblance during the hand. That is to say, not playing a Spring or Summer will reduce the time the hand is played out.

If the card played has an ability, it’s resolved as soon as it is placed in the Swarm. If the ability is not resolvable, ignore it.

The next player in turn order sequence now plays to the Swarm if possible. This starts the “Hunt” (which is a fun way of saying “hand,” I suppose, thematically speaking).

The Hunt has a few rules that need to be honored. They are as follows:

The Swarm is won when only one player can place a card to the Swarm. This player has won the Swarm and the hand. All the cards currently in the Swarm are collected and placed next to the winning player in a single face-up pile referred to as the “Stash.” The cards in the player’s Stash will be counted for points at the end of the game.

This ends the hand. A new hand now begins with the first player of the hand being the last player to flunk. Each player is dealt with several cards to bring their hand to a total of five cards.

The endgame is triggered when the last card from the draw deck is collected. The gameplay continues as normal. All players then count their points in their Stash.

In the rare event that a player collects all four of the Royal Fairies in their Stash, the game comes to an immediate end, and the player wins regardless of how many points any other player has in their Stash.

To learn more about Fairy Season, visit the game’s webpage.

The Child Geeks had a wonderful time with the game, finding it fun, fast, and, most importantly, engaging. According to one Child Geek, “I like the game a lot. I didn’t know what to think about it at first because of all the fairies – I like dragons better – but the game was a lot of fun.” Another Child Geek said, “I liked it much better than the other games that my parents make me play with cards. This game has pretty fairies and funny goblins. I love it when I make my mom go grrrr!” The game was a real delight with our youngest and most inexperienced geeks, resulting in a vote of full approval.

The Parent Geeks also found the game to be fun. They didn’t much care for the game’s thematic elements – finding it to be largely unimportant – but the game itself was a big hit. According to one Parent Geek, “The game is unassuming. Easy to approach and cute. When you read the rules, you say to yourself – jeepers, this is easy – but it isn’t. The game kept me leaning in at the table and thinking about every card. Excellent stuff.” Another Parent Geek said, “As trick-taking card games go, I really enjoyed this one. Fun with fairies for the kids and an exciting card game for us adults who take our card games super serious.” When all the fairies had returned home, the Parent Geeks gave Fairy Season their full approval.

The Gamer Geeks didn’t care for the game’s theme. It turns out fairies are not “cool” among the dude Gamer Geeks, but our lady Gamer Geeks found it very approachable. Regardless of gender, our Gamer Geeks all came to the same conclusion. According to one Gamer Geek, “An easy card game to learn but not to master. I was eager to play each hand and enjoyed myself a good deal. A fun game as a teaser for more games to come.” Another Gamer Geek said, “A delightful little card game that has enough depth to it to make me feel my time was well spent playing it.” When all the goblins were chased away, the Gamer Geeks were happy to give Fairy Season their full approval.

I rather enjoyed Fairy Season, finding it to be a fast-paced and interesting trick-taking card game with a fun twist on hand-management. And here is where I need to stop gushing and make sure you – the reader – really understand what this game is. It’s a card game. Plain and simple. Yes, it has fairies and goblins, but this is just the thematic fun of the game. What you really have here – removing all that fairy nonsense – is a card game that truly makes you think. I liked that and found myself often forgetting that I was playing a game about saving fairies. This is good, as I’m not a member of the fairy fan club.

Card games can feel like a dime a dozen. That is to say – for those of you not familiar with the phrase – cheap and abundant. This is true. Heck, go to one of my favorite websites, Pagat.com, and you’ll see that a simple deck of 52 standard playing cards is anything but. Fairy Season, however, did a great job of taking what I would consider the mundane and making it a lot of fun with interesting twists and turns—a real delight.

Do try Fairy Season when time allows. Even if you aren’t a fan of card games in general, I think you’ll enjoy the casual play, in-depth choices you have to make, and the speed at which the game hurdles you along from start to finish. Do give this magical little game a try.