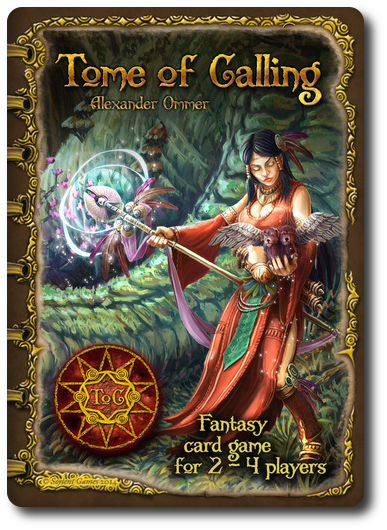 When each beast and bird was created, its true name was given. Powerful mages have learned these names and recorded them in what would be known as the Tome of Calling. Using the tome, a mage could summon creatures to do their bidding. They would, in essence, become unstoppable. You have but a few pages of the tome, but enough to challenge any foe.

Tome of Calling, designed by Alexander Ommer and published by Soylent Games, is comprised of 52 cards (referred to as “Scrolls” in the game’s background story). The cards are as thick and as durable as your standard playing card. The artwork by Patrick Soeder is fantastic. Each creature, monster, and horror is colorfully illustrated and brought to life. Here are just a few. 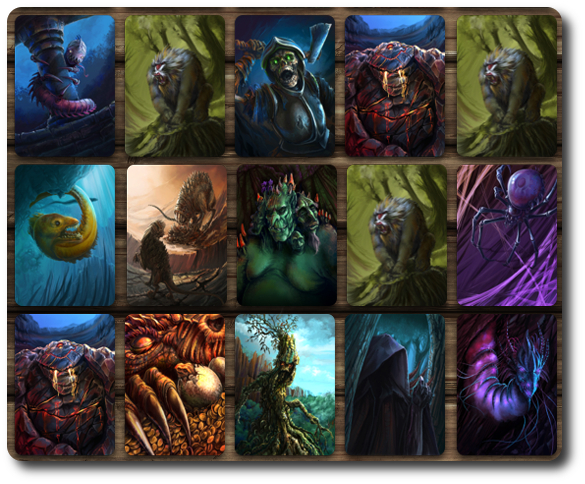 The Power of True Names

The game is thematically whisking players away to a fantasy land where they take on the role of a mighty mage. So mighty, in fact, they have learned the true names of giant and horrific beasts that obey their summons. The beasts, monsters, and creatures are the ones depicted on the cards which also thematically represents 1 page from the Tome of Calling. Each card contains 3 important pieces of information. 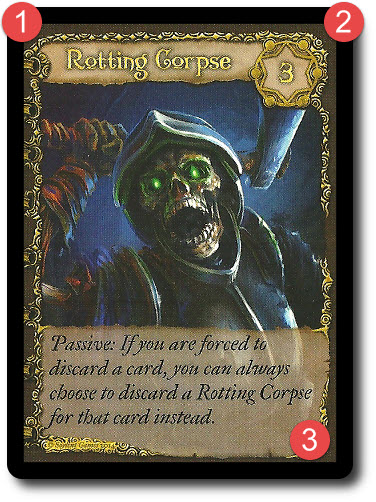 A Call to Action

To begin, shuffle the deck of cards and deal 3 to each player, face-down. These cards are the player’s starting hand. There is no hand size maximum or minimum in the game. The remaining deck of cards is placed in the middle of the playing area and is the draw deck for the duration of the game. Leave room for a discard pile. Then all that remains is deciding who should go first.

Tome of Calling is played in rounds and turns with each game consisting of no less than 3 or more rounds. A player’s turn is summarized here.

The player draws the top-most card from the draw deck and adds it to their hand.

From their hand, the player now selects 1 card and plays it. Most cards are played to the discard pile and some are played in front of the player. Unless the card says otherwise, they are always played to the discard pile, face-up. The effect described on the card is immediately resolved. Some effects will allow a player to look at another opponent’s hand, exchange cards, remove cards, and force opponents to hand over cards.

The effect listed on the card targets everyone in the game unless it specifically states a player gets to target an opponent. This means a card played could end up hurting the player who is using it for their turn. Cards placed in front of the players may block certain effects.

This ends the player’s turn. The next player in turn order sequence now takes their turn repeating the steps noted above.

Ending the Round and Winning the Game

The round ends if the draw deck is depleted or 1 player no longer has any cards in their hand at the beginning of their turn. The last player to draw a card must play 1 card and then no additional turns are taken.

All players then look at the cards still in their hand, adding the number values of the cards together. The player with the highest sum has won the round. Ties are broken by comparing the highest number valued card in the tied players’ hand.

Another game round begins by collecting all the cards, shuffling them, and dealing each player 3 new cards. Game play continues as described above until 1 player has won 3 rounds and leads by at least 1 additional winning round. This ensures players who are tied for the number of rounds won have an incentive to beat the socks out of their opponents.

To learn more about Tome of Calling, visit the game’s web page.

The Child Geeks had zero issue learning this game, but didn’t understand the need to balance action with point preservation. Not until after the first couple of rounds of game play, at any rate. According to one Child Geek, “Oh, now I get it! I need to keep some cards for points and use some cards to subtract points owned by the other players. OK, now it makes sense.” And that is, essentially, the heart of the game. Playing some cards, keeping others, and hoping that your choices payoff. Another Child Geek said, “I really like how the cards look, but I don’t think what they do has anything to do with the monster.” Very true. Few of the cards provide an effect that is thematically inline with the card art. Some of the Child Geeks were very upset by this, while the majority didn’t care one bit. When the games were over and the monsters were called back, the Child Geeks voted and all agreed that Tome of Calling was a fun game. 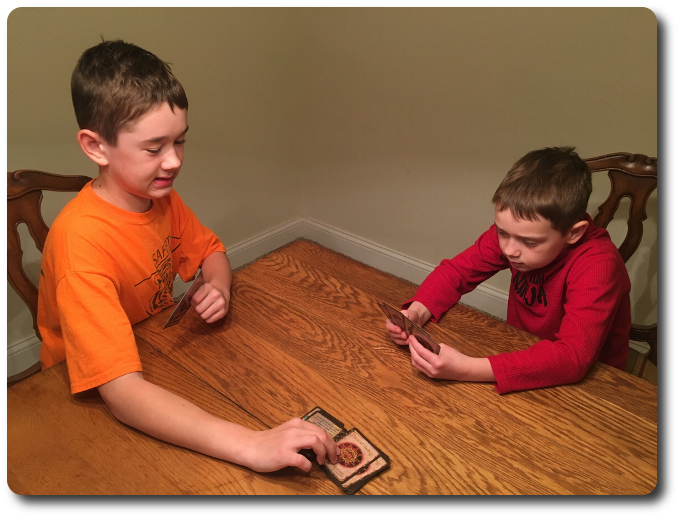 Two of my mages compete against me to be the top wizard dog. Many beasts were sacrificed…

The Parent Geeks liked how easy the game was to learn and to play, finding it to be very casual with just the right mix of critical thinking and hand management to make the game engaging. What they didn’t care for was how much they didn’t know. As one Parent Geek put it, “I like the game OK, but I have no idea if I am playing my hand correctly until the round is over. I don’t much care for that, as it makes me feel like I am playing in the blind and somewhat in a vacuum.” In short, it’s the lack of information one has on their opponents that made several Parent Geeks wonder if they were doing anything right. Another Parent Geek said, “If we just look at the game as something simple and fast, it’s a lot of fun. Perfect for just killing time or starting an evening of games with friends. But it’s not a game I would want to play on any serious level. All of my choices are being made on card values and guesses, which can get pretty old.” When the votes came in, the Parent Geeks gave Tome of Calling a mixed approval, finding the game to be entertaining in small doses.

The Gamer Geeks didn’t care for the game. According to one Gamer Geek, “I’ll be frank. This is War with a little more thought put into it. The game replaces numbers with effects, but this makes the game even more random and impossible to play because the effect may not affect anyone.” Another Gamer Geek said, “I like the game’s idea, but I think it only works if the game is viewed as very casual and not very deep. Players do have to put some thought into their choices, but the game provides very little feedback to help the player make good choices.” And one more Gamer Geek said, “I can play this game while sleeping. That’s how little influence the player has on the game. I can just pick a card at random, and there you go.” In fact, the Gamer Geeks tried this and played a game with 3 players and 1 ghost player, where the ghost player draw a card, shuffled their hand, and played 1 card at random. The Gamer Geeks were not surprised to find that their was no impact to the game and the ghost player seemed to do everyone another player would. The Gamer Geeks voted to reject Tome of Calling.

Tome of Calling is a simple card game, but that does not mean it isn’t worth playing. The game challenges the Child Geeks to consider the value of each card and if the effect it may or may not provide is of equal value to the card’s value. For the Parent Geeks, Tome of Calling proved to be an entertaining game with their families and with their peers if a short and easy game was needed. The Gamer Geeks, being the elitists that they are, didn’t care for the game for reasons that clearly reinforce the fact that Tome of Calling is not a complicated or in-depth game.

As for me, I agree with all three of our groups. The Child Geeks were spot on when it came to pondering how a card should best be used, as that is the entirety of the game. The Parent Geeks quickly understood that the game was light and straightforward, but still provided entertainment as long as one didn’t require a lot information to have fun. I even agree with the Gamer Geeks who found the game to be too random and disconnected. All three of these groups observed different levels of the game and all three are correct.

A game can never be all things to all players and Tome of Calling is no exception. I found the game to be perfect with certain groups and horrible with others. It’s a small game that fits in your back pocket and can be played with very little space, making it a fun distraction when you are on the go or just want a quick game at home. For those looking for a card game full of depth, logical thinking, strategy, and tactics, they will find little to be happy about here. For those looking for a card game with many twists and turns, unknowns and sudden revelations, then Tome of Calling is a game you should play.