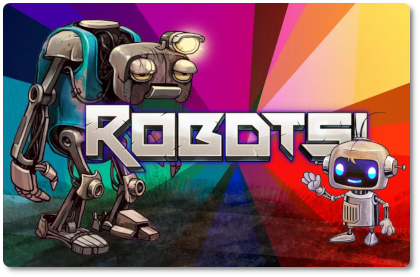 If Hollywood has taught us anything – other than having sexual relations in a cabin at night next to a lake is a bad idea if you are a teenager – robots tend to turn on their masters with a penchant for eradicating all humans. In this game, such nonsense is – well – nonsense. You are in charge of a highly operational robot factory. You build the best, and you expect the best. But competition is fierce, and skimping out on quality to produce quantity is not an option. Manage your resources right, and you’ll do fine. Do it poorly, and you’ll be junked just as fast as an out of date robot.

Robots!, designed by Aaron Martlage and published by Border Games, is comprised of 90 cards. The cards are as thick and as durable as your standard playing card. Illustrations by artist Tutun Mondal are cartoonish, bright, colorful, and fun depictions of different robots. Not included in the game, but necessary to play, is a pen or pencil and a piece of paper to keep track of players’ scores.

Welcome to the Factory Floor

To set up the game, remove and set aside the Player Reference cards and the double-sided playing cards. Then shuffle the remaining cards.

Seconds, hand the deck of shuffled cards to one player. This individual will be the first dealer of the game—deal seven cards to each player, face-down. This is the player’s hand. Feel free to pick it up.

That’s it for game setup, and the first round of gameplay can now begin. The first person to begin the round is the player immediately to the dealer’s left.

Robots! is played in turns and rounds with no set number of turns or rounds per game. A player’s turn in a round is summarized here.

The first thing a player does on their turn – and will always do – is draw a card, adding it to their hand. The drawn card can be taken from the Robot Factory or the Scrap Heap.

If the player draws from the Robot Factory, a blind draw, they can move directly to the next step.

The player is attempting to create or play to one or more “spreads.” A spread is a series of three or more face-up cards, for a maximum of 15 cards. When a player places a spread, the cards are placed in front of them in a row, allowing all players to view them easily.

To play a new spread, the player must have – at a minimum – three cards. However, a player is always welcome to play more than the minimum three to start a new spread and can play at a minimum of one card to any previously played spread.

A player must also place their last card drawn from the Scrap Heap to any previously played spreads to the table or use it to create a new spread. If they cannot use the card on their own spreads, they must play it to an opponent’s spread. This is not a good thing, as you’ll be giving your opponent points. 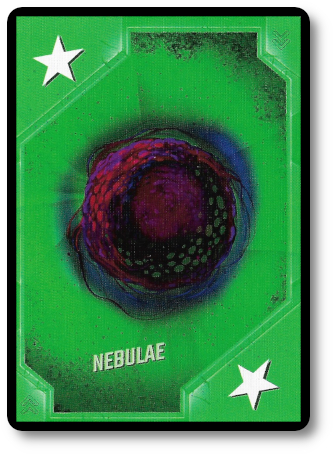 The “Wild” player card can represent any number, including the “1” or “15” via the “Star” player card. Only one “Wild” playing card is allowed per spread. “Wild” and “Star” cards CANNOT be used to create a “Robot.” 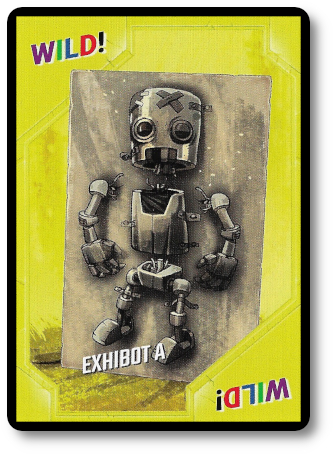 If the player successfully builds a “Robot” spread, they are given double-sided player cards. This is a fun way to represent the robot that was just built, thematically speaking. This card, however, is handy when it comes to scoring and protects the spread. Once the “Robot” playing card is selected, collapse the spread into a single pile and place the “Robot” playing card on top of it. This spread is now immune to any shenanigans during the round. 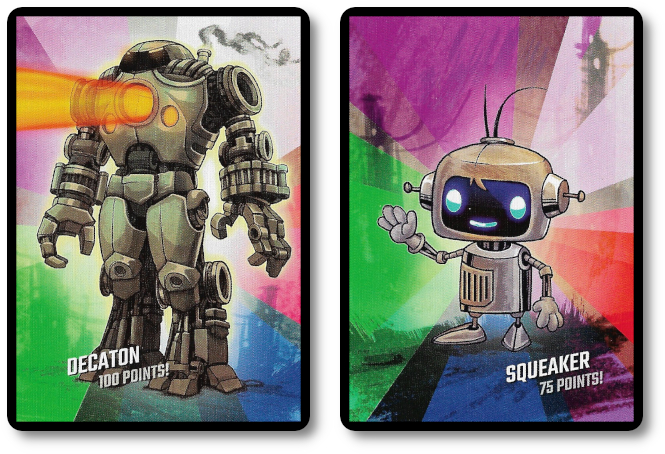 The last step on a player’s turn is to discard one card of their choice from their hand. The discarded card goes directly to the top of the Scrap Heap.

But wait, there’s more! This game includes a fun rule to make new friends and enemies.

Some of the cards have an action printed on them. If these cards are discarded, the action is triggered and immediately resolved. The actions are as follows: 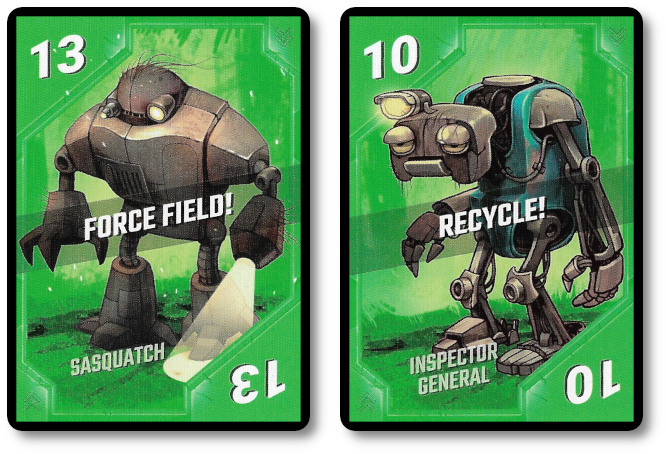 The next player in the turn order sequence now takes their turn, starting with step one.

End of the Work Day

The round continues until a player has placed all their cards into spreads except one, leaving only one card left in their hand, which is then discarded at the end of their turn. Points are then scored and recorded by either the dealer or any player who likes to write down numbers.

Once all the points have been determined and recorded, the next round now begins. Do this by collecting all the cards and shuffling them. Give the deck to the next player to the left of the previous round’s dealer. Essentially, you are resetting the game per the game set up instructions.

The game continues as summarized until a player scores 250 or more points at the end of the round. The first player to do so wins the game. If two or more players score the needed maximum, ending the game, the player with the most points wins.

To learn more about Robots!, visit the game’s website.

The Child Geeks enjoyed themselves, finding the mix of focused play of cards and light “take that” mechanics against opponents to be well balanced. Of course, they didn’t say as much; you have to read between the lines with kids. According to one Child Geek, “I really like how you need to spend time working on playing your cards just right to the table, but you also need to play your cards right to slow down other players.” Another Child Geek said, “I liked it, and I think the robots are cute. I like how each has a special ability, and you don’t have to use it if you don’t want to and want to be nice to your other players. But I don’t do that a lot.” Adorable. When all the games were over, and the last robot walked off the assembly line, all the Child Geeks voted to approve Robots!

The Parent Geeks also enjoyed the game, finding it to be engaging, strategic, and most importantly, fun. According to one Parent Geek, “I love Rummy, and this game is a lot like that, but with a fun theme and fun ways to interact with other players. I really enjoyed it with my wife and my kids.” Another Parent Geek said, “Ah, yes. I did so enjoy this. A simple approach to great fun. Had a blast with my daughter and two sons. My wife always scolded me for putting the hurt on the kids with card plays, but let’s be honest. They need to toughen up. Too much video game playing. Time to teach them harsh lessons through an entertaining and approachable card game.” Well… hmm… OK. Parenting skills aside, all the Parent Geeks voted for full approval of Robots!

The Gamer Geeks enjoyed it but didn’t love the game. According to one Gamer Geek. “Oh. Look,”. It’s Rummy. I know many people enjoy that card game, and yes, I enjoy it too with my grandparents or at the hunting shack, but as a gamer, I don’t think it’s anything other than mediocre. It does its job and does it well, but it is not exceptional by any means.” Another Gamer Geek said, “Good enough for the kids and the family, but not a game I would ask my gaming elitists to play unless we were all very burnt out on more engrossing games. Full credit to the game designer, but – yeah – I don’t think it is anything other than an OK game.” When all the votes were in, the Gamer Geeks gave Robots! a mixed endorsement, finding it neither bad but not terribly great, either.

Look, it’s Rummy. But with robots and a fun twist that allows you to protect points and mess with other players. Which, honestly, I like. I liked it a lot. I enjoyed myself a good deal, and I am a fan. I have always enjoyed Rummy, mostly because it’s a game in which I kick some serious ass, but more importantly, it’s a game that can be easily taught and played by anyone. Robots! is the same: easy rules, easy gameplay, and easy fun. The game doesn’t look to challenge you. It only wants to entertain you, and it does so. Easily.

If you enjoy classic card games and Rummy, Robots! is a no brainer. Please go out and buy it, enjoying your purchase for years and years to come. Don’t like Rummy? Well, then. Stay the heck away from this game because it’s Rummy, except with robots and powers and stuff. And that “stuff” is good, folks. Real good.