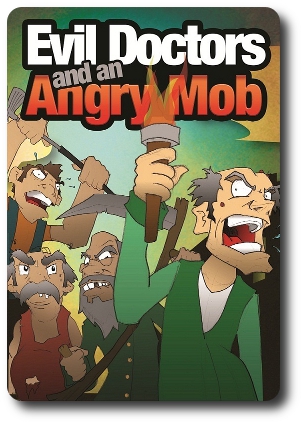 The expansion is comprised of 1 Angry Mob token and stand, 24 Action cards, and 6 Evil Doctor cards. All the bits are of the same quality found in the base game, Good Help.

Included in this expansion are 6 Evil Doctor cards that give each doctor a special ability. These cards are shuffled into the Assistant Deck and bid on at the start of the game. This changes the original rule where the players just grabbed a Doctor token. If not bidding, randomly distribute one Evil Doctor card to each player.

There are 4 different groups of townspeople included with this expansion. These are “Peasants with a Pitchfork”, “Serf with a Scythe”, “Toiler with a Torch”, and a “Worker with a Wedge”. These are special Action cards and can be played in front of the player using the standard action rules.

The 3 remaining Action cards are used to remove townspeople cards from play.

Once a player successfully builds their Monster and turns it loose, the Angry Mob comes into play.

If the Angry Mob and Monster should ever occupy the same space at the same time, a fight ensues! The Angry Mob’s strength is equal to the results of a six-sided die roll, plus the total number of townspeople in front of the controlling player. The Monster adds its Victory Points to a single die roll if its brain Body Part is not-so-fresh or a double roll if its brain Body Part is fresh. In case of a tie, the Monster wins.

The Doctor’s special abilities are always “in use” and can be invoked by the player at any time where the special ability makes sense.

The victory condition for Good Help remains the same except that if all the Monsters have been killed, the player who controls the Angry Mob wins the game.

Learn more about the expansion by visiting the game’s official web site.

I think this expansion will be rather well received as it provides the players the ability to directly interfere with another player’s Monster if they are still racing to make theirs. In this way, players can continue to collect body parts and slow down the rampage of the Monster. Of course, control of the Angry Mob hinges on who has the majority. This is also a very good thing as I think it will cause Action cards to be played more often and in greater abundance.

When I showed it to my little geek, he was very excited about it! He and I both agreed that what was missing from the game, thematically speaking, was a bunch of peasants running around town with pitchforks in their hands. This expansion adds that much needed element to the game but also provides some interesting Doctor special abilities, too!

After I explained how the expansion was to be used and how it would influence the game, I asked my little geek his thoughts.

“It’s about time the game had an angry mob! I’m going to chase down your Monster!” ~ Liam (age 7)

Huzzah! I love it when my little geeks get excited and all fired up! Let’s play!

Some game expansions just add “more things to do”, which is more or less the trend nowadays. There is nothing wrong with extending the life of a game! Some expansions actually “fix” the base game. Seldom do we see an expansion that improves a game overall and improves the theme. Evil Doctors and an Angry Mob does wonders to the game play and to the game theme! In fact, I’d say that it completes the game and improves the overall player’s experience. In some respects, I now see the game as an old horror movie being played out in front of me based on the player’s actions!

My little geek and I loved the Angry Mob and how it is used in the game. Adding it to the base game was exceedingly easy, which is always a bonus, and didn’t require much in the way of new rules. The new Doctor special abilities were also neat to play with and made us think all the more about who our Doctor and Assistants were going to be. Now Doctors were more than just piece on the board. With the right Doctor/Assistant combo, a player could do some serious damage on the game board and have a real advantage over the others.

And on this point, I must throw up a cautionary flag. There isn’t much in the way of “game balance rules” that would suggest there is anything stopping a savvy player from creating a “Dream Team” of evil. A more confident and seasoned player will have no problem selecting the right mix of Doctor and Assistants to obtain a clear game advantage. Of course, this also creates a much more interesting and worthwhile bidding experience! Talk about a cutthroat auction! 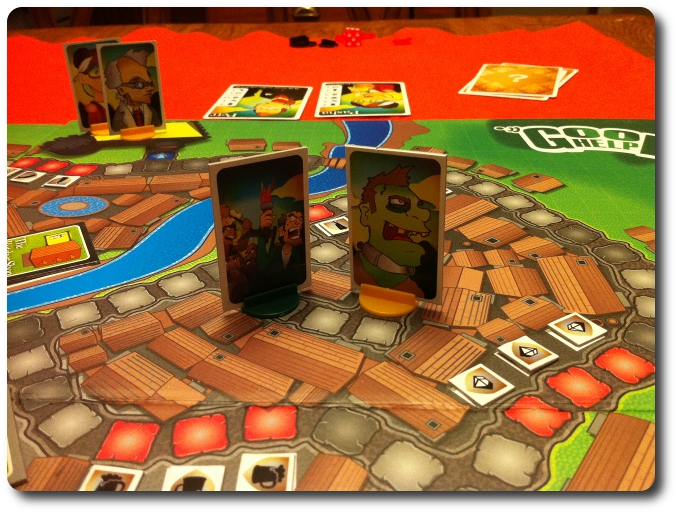 Gamer Geeks, this is just what the evil doctor ordered for Good Help. It completes the theme, adds a different dynamic to the end game, and provides more options to the players. All this without increasing the game’s difficulty or learning curve! Unlike the base game, the expansions rules are very straight forward and easy to understand. This will make it easy and fast to incorporate into your next game play as the new rules are few and very light.

Child Geeks, now you can stop the Monster from attacking the town directly while you still work on building your own monster! Learning how to use the Angry Mob is easy and a lot of fun to send off to fight the Monster as you secretly and quietly continue to build your own in your castle!

I am most pleased with this expansion and am surprised to see it not included in the base game. However, when we consider how much you are getting in the base game, it makes perfect sense why you wouldn’t want to include it in the first place. There is already a lot going on in Good Help and adding the Angry Mob and the special Doctor abilities would most likely be lost in the game’s complexity instead of shinning like a gem as an expansion. If you are a fan of Good Help, this expansion is a must!