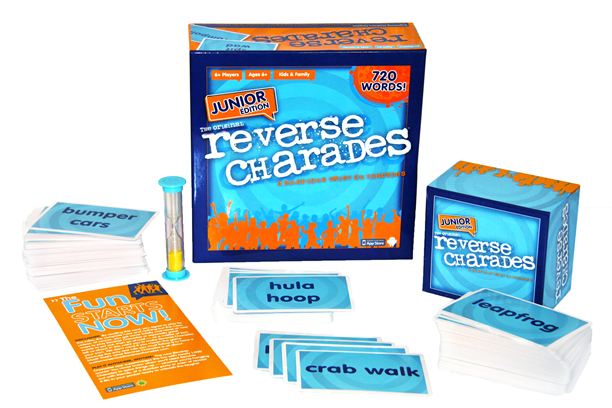 Grab a group of friends and family and get ready for quiet but outrageous fun! It’s the traditional game of Charades, but with a catch. Instead of one person silently acting out a person, place, or thing, an entire group acts it out for one individual to guess! Everyone will have fun with this energetic and creative family party game!

Reverse Charades Junior Edition is the more “kid friendly” version of the original game, Reverse Charades. It is comprised of 360 Word cards that have words on the front and back of the card for a total of 720 words. Also included is a 60-second sand timer. Not included, but needed, is anything you can use to keep track of points. For example, a pad of paper and a pencil.

To set up the game, divide all the players into teams as evenly as possible. The preferred number is 3 or more teams with an even number players per team if possible. Once the teams are set, decide on the number of rounds or the number of points needed to win the game. For example, the first team to get 10 points wins, where each Word card won is worth 1 point.

On the team’s turn, they will select a guesser. This individual will be responsible for attempting to guess the word. The rest of the team will be the actors.

The actors now have about a minute to act out the word without making any sounds, silently mouthing out words, or using objects in the room. Doing so will cost the team the word and the point. The guesser can shout out what they think it is at any time and as often as they like. If the guesser gets it right, a new Word card is selected by the opposing team and the actors continue as long as there is time left.

Once the time is up, one of the members of the opposing team shouts “Time!” and the actors and guesser must stop. The number of Word cards the guesser guessed correctly are counted and added to the team’s total points.

Game play continues with the next team selecting a guesser and the rest becoming actors. Continue playing until the victory condition to win the game is met. Of course, if you are haveing a great deal of fun, you can always go a few more rounds!

My entire family and everyone I have ever played Reverse Charades with has had a great time. To this day, I consider it one of my better party games and bring it out every year during my family’s annual New Year’s Day party. It’s perfect for large groups and a great deal of fun to watch all the little geeks act silly with the adults. I have no doubt that the Junior Edition will also be a big hit, too.

As I looked through the words, my smile broadened more and more. The words included in the game were indeed kid friendly, but where also perfect for adults. A party game need not be difficult or overly challenging. The game is meant to act as a medium in which everyone can participate in a group activity. Even with kid friendly words, adults would have as much fun and the same level of challenge as they would with the original game.

When I shared the words with my little geeks, they were excited to play. I, too, was excited, because my oldest little geek’s reading ability has greatly improved and he was able to read every card and understood what the word or phrase meant.

After sharing the words with my little geeks, I asked them their thoughts.

Already my little geeks have identify two very important points with this new edition. First, the words and phrases are recognizable to them. Second, just because they know what it is doesn’t mean it will be easy to act out! Let’s play a few games and test this statement.

Reverse Charades Junior Edition is as much fun as the original and just as challenging. A simplification of the words did not reduce the game play or the difficulty of acting out a word as a group.  This is outstanding as one of my concerns about the original Reverse Charades was younger little geeks not knowing what a word or phrase meant or represented. However, with words like “Runny Nose”, “McDonald’s”, “Jenga”, “Cheerios”, “Tinker Bell”, and “Duck Duck Goose”, your little geeks will not only recognize what the word or phrase is meant to represent but will also have a good deal of fun acting them out!

I also observed that adults seemed to have more fun with the Junior Edition. When you stop and think about it, this makes total sense. The challenge of the game has always been to act out the word as a group within the defined rules that state what you can or cannot do. Simpler words did not simplify the game. It is still just as hard and as fun to guess “Titanic” as it is to guess “Tinker Bell”. For the adults, maybe even more so! 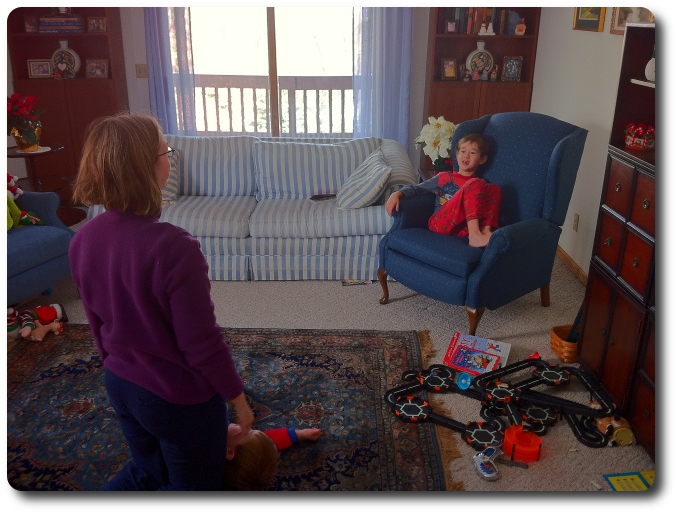 Mom and little geek act out a word as the guesser looks on, laughing

Gamer Geeks, this is a party game, and as such, is not what I would consider a “gamer’s” game. Like all party games, it it meant to entertain and incorporate play for a large audience. These types of games seldom have enough meaty game play to entice a gamer elitist who seeks out more complexity and deeper game mechanics. Reverse Charades Junior Edition is no exception to this statement and falls well short of a game you’d put in front of your gamer buddies.

Parent Geeks, this is a wonderful family and party game that will keep you laughing and enjoying every moment. Whether you are a guesser, actor, or just an observer, the game will engage you as silliness and creativity abound! This edition of the game can be added seamlessly to the original Reverse Charades without any issues, or played by itself if you prefer. The rules are the same for both game editions and the Word cards can be mixed or specifically used for certain groups to create different levels of difficulty if needed. The game also promotes team work, communication skills, imagination, and self-confidence as the players might need to step out of their comfort zone.

Child Geeks, this is a great game that lets you go wild and crazy! Act out an elephant or a tiger! Pretend to be an astronaut or a monster! You and your friends and family will laugh and have a wonderful time being silly and creative as you act out the word or phrase without making a sound! But you can’t do it alone! You’ll need the help of your team to help the guesser, and if you are the guesser, you must rely on your team to help you guess the word!

I continue to be very happy with Reverse Charades and the new edition, Reverse Charades Junior Edition, is exactly what I was missing to complete the experience. The game is now well in reach of all the members of my family and can be played with an even wider age and experience range. All games have their limits and accessibility defined by age or knowledge-base. The Junior Edition stretches these limits allowing little geeks and big geeks from 3 to 100 to enjoy a great game together, fostering community, fun, friendship, and family. Bring Reverse Charades Junior Edition to your next party or family gathering and you will have no problem enjoying every moment this game is played.