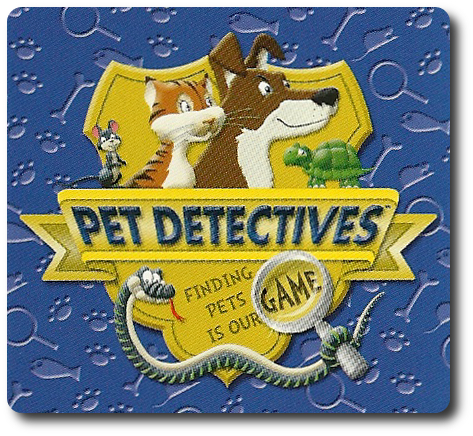 An alarming number of pets have gone missing in town. Their owners are desperate to find their missing companions and are offering big cash rewards to whomever finds them. Not being one to dismiss a lucrative opportunity, you quickly get to work investigating! Not surprising, a number of other people have joined the hunt and want the money just as badly as you. The most observant detective will win, so keep your ears sharp and listen for clues!

Pet Detectives, designed by Allen Wolf and published by Morning Star Games, is comprised of 80 Pet cards (40 green, 40 blue), 4 Custom Pet cards (2 green, 2 blue), 40 Pet Dollars (paper money), and 26 Action cards. The cards are durable, but not rounded with smooth ends. That’s pretty important to some people, so I thought I should mention it. The Pet cards have images of some of the cutest animals you will ever see, which will make some gush over them. The Pet Dollars are made of paper money, which is the bane of my gaming existence. The entire game comes in a tin lunchbox, making it very portable.

To set up the game, first shuffle the Pet cards and deal 5 out to each player, face-down. Players should keep their cards hidden until played. Place the remaining deck of Pet cards face-down in the middle of the playing area.

Note: If any player has been dealt a matching pair of cards, they should play them now and collect the appropriate amount of Pet Dollars. They should then draw backup to 5 Pet cards.

Second, shuffle the Action cards and place the deck face-down next to the Pet cards. You should now have 2 decks of cards in the middle of your playing area. If not, you are reading too fast.

Third, place the Pet Dollars to one side of the gaming area or give them to one player who will be the designated Banker for the game.

Note: The Custom Pet Cards are blank and allow the game’s owner to create their own pets. They should not be used in the game until they have been created.

That’s it for game set up. Time to find those missing pets!

Pet Detectives plays in turns with no set number of turns per game. A player’s turn is summarized here.

The player can ask any of their opponents if they have a specific pet. Each Pet card lists the pet’s name and animal type. The player MUST have the card they are asking for. What the player is looking for is a matching card to create a “Pet Pair” which consists of 1 blue Pet card (“Found”) and 1 green Pet card (“Lost”) that shows the same animal WITH the same name. The color of the card the player has is important. If the player has a blue Pet card they want to match, they should ask a player who has the most green cards for the missing pet. 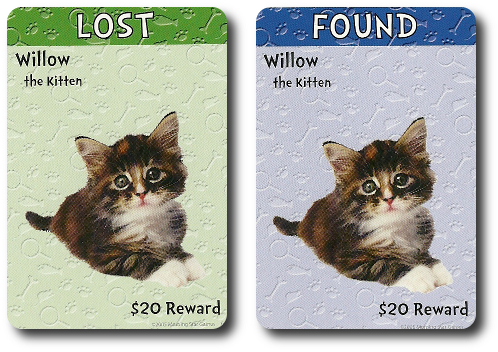 Example of a Pet Pair. WARNING: Do not stare too long into the kitten’s eyes…

If the opponent does have the matching Pet card, they must give it to the player. The player then places the Pet Pair down in front of them and collects the amount of Pet Dollars shown on one of the Pet Pair Pet cards (not both).

The player now skips step 2 and proceeds to step 3.

If the opponent does not have the Pet card the player asked for, the player draws the top-most Pet card from the Pet card deck and adds it to their hand. If the drawn card creates a Pet Pair, the player places it down in front of them and collects the amount of Pet Dollars shown. 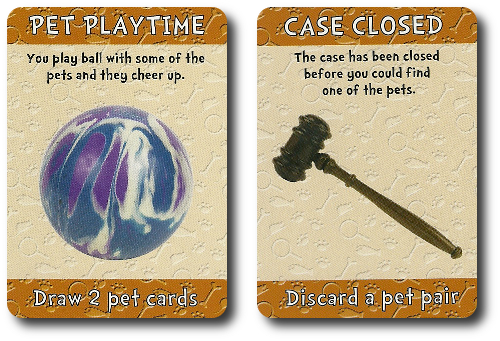 This completes the player’s turn. The next player in turn order sequence now takes their turn starting with step 1 above.

Completing the Investigation and Winning the Game

The game continues as noted above until every Pet card is part of a Pet Pair. If a player runs out of cards before their opponents, they wait until all the players have finished. All the players then count the number of Pet Pairs they have collected (not the amount of Pet Dollars they are worth). The player with the most Pet Pairs wins the game.

Shuffle the Pet cards and deal them face-down  in even rows. Players then take turns flipping over 2 Pet cards. If the Pet cards match, the player takes the Pet Pair. If they do not, the cards are flipped back to the face-down position. This continues until all the Pet Pairs are found. The Player with the most Pet Pairs wins the game.

Remove the Action cards and the Pet Dollars to play Pet Detectives exactly like Go Fish!.

Instead of counting the number of Pet Pairs, add the Pet Pair Pet Dollar reward amounts. The player with the most Pet Dollars in reward money wins the game. This provides for more strategic game play as some of the Action cards require the players to exchange Pet Pairs.

Pet Detectives sounds like Go Fish! with some random surprises thrown in thanks to the Action cards. That isn’t going to be enough to interest the Gamer Geeks and will most likely result in a total Gamer Geek rejection. Not surprising when we considering that Pet Detectives is a meant for the Child Geeks. I’ll be lucky if I can get a Gamer Geek to sit down and play the game with me.

Teaching Pet Detectives is best done with a few examples of play. Demonstrate how pets are matched and make sure players understand that they don’t need to have the “Lost” Pet card to ask for the “Found’ Pet card. They MUST have the card they are asking for, however. Note that Pet Detectives does require players to read, making Pet Detectives a difficult game for those Child Geeks who cannot. Team up the younger Child Geeks with older siblings or Parent Geeks to include them in the game play.

After teaching Pet Detectives to my two oldest Child Geeks, I asked their thoughts on the game so far.

The names on the Pet cards are pretty funny and many of the animals pictures are ridiculously cute. Will that be enough to keep our interest? Let’s play and find out. 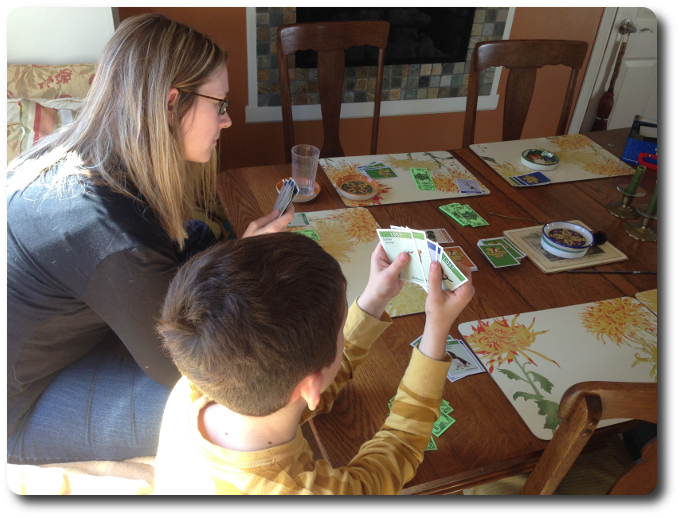 The Parent Geeks also approved Pet Detectives, but not because they found it to be a fun game. According to one Parent Geek, “This is a simple game that my kids find to be a lot of fun to play. I find it to be a bit too simple and repetitive, but it does bring back some happy memories.” Both the game and the game’s tin lunchbox were found to be subjects of nostalgia, bringing back floods of memories of early childhood card games and many grade school lunches. When the votes came in, all the Parent Geeks found Pet Detectives to be an enjoyable family game, but not a game they would want to play with just adults.

None of the Gamer Geeks wanted to play this game. Since you cannot reject that which you know nothing about, the overall endorsement for the gaming elitist is “Not Applicable”. Pet Detectives is just a bit too easy and a bit too childish to attract the attention of the serious gamers. Clearly, the Gamer Geeks are not the target audience.

There is a game here worth playing with your Child Geeks. It introduces strategy, reinforces memory, and plays fast enough to keep your Child Geeks focused and involved. Parent Geeks will recognize the benefits, but might suffer in silence while playing. There is very little offered in the game play that will keep Parent Geeks interested enough to play the game often or with their peers. The Gamer Geeks took one look at Pet Detectives and voted to ignore it completely mostly because it’s a Go Fish! clone.

Personally, I didn’t mind it and would play Pet Detectives again with my little geeks if they asked for it. It’s a charming little game with cute pictures of animals and funny names. The game doesn’t do much for me intellectually other than the necessity to remember who asked for what card so I can grab it later. But not all games you play with the family need to be brain burners. Pet Detectives provides just enough game to make it an enjoyable family experience without causing you to slip into a coma out of boredom. Since it sits up to 10 players, the game is also a good one for larger get togethers when there are a lot of Child Geeks running around.

If you and your Child Geeks like a good card game, do take a look at Pet Detectives.