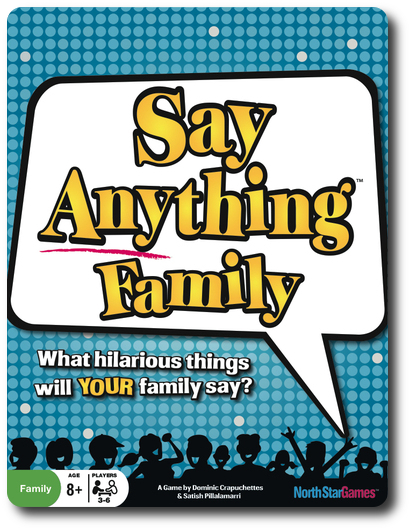 President Franklin D. Roosevelt said, “There are as many opinions as there are experts.” Everyone has an opinion, even if they say they don’t have an opinion, which is technically an opinion. With so many people having different points-of-view, who can say who is right and who is wrong? Simply put, the majority, but even the majority cannot force  a single individual to think differently. In this game, you don’t need to change the opinions of others, but you do need to consider how others think to win!

Say Anything Family Edition, designed by Dominic Crapuchettes and published by North Star Games, is comprised of 60 Question cards (double-sided), 6 dry erase Answer boards (1 per player), 6 dry erase markers (1 per player), 1 SELECT-O-MATIC 6000, 12 Player tokens (2 per player), and 1 dray erase Score board. All the game components are durable and thick. One of our dry erase markers was dry right from the start, but I think that’s a rare error and should not reflect poorly on the product as a whole. Not included in the game is something to remove the dry erase marker from the Answer boards. A tissue or a napkin is all that is needed. Make sure to ALWAYS clean your boards after each game or you’ll be spending much more time cleaning your boards than playing the game.

To set up the game, give each player 1 dry erase marker, 1 dry erase Answer board, and 2 Player tokens of the same type that should match the player’s selected Answer board..

Second, choose 1 player to be the Score Keeper. This player is given the Score board and is in charge of keeping track of the players’ scores for the game (including their own).

Third, determine who will go first and give them the SELECT-O-MATIC 6000.

Fourth, place the Question cards to one side of the game playing area and determine which side of the cards will be used.

This completes the game set up. Time to play the game!

Say Anything (as Long as it’s Popular)

Note: Players will be asked to write and read answers and questions, but they are not required to do either to participate. An adult player can write down and read answers or questions to younger players throughout the duration of the game without putting any player at an advantage or disadvantage. This makes the game playable by everyone as long as one player is available to help. Our youngest player was 7-years-old, but you could play Say Anything Family Edition with even younger Child Geeks. The only real perquisite to play the game is understanding the questions and having an opinion.

Say Anything Family Edition is played in turns with a set number of turns per game determined by the total number of players. A typical game turn is summarized here.

The player who currently has the SELECT-O-MATIC 6000 is the “Judge” for the game turn. The Judge now draws a Question card, selects 1 question, and reads it out loud. 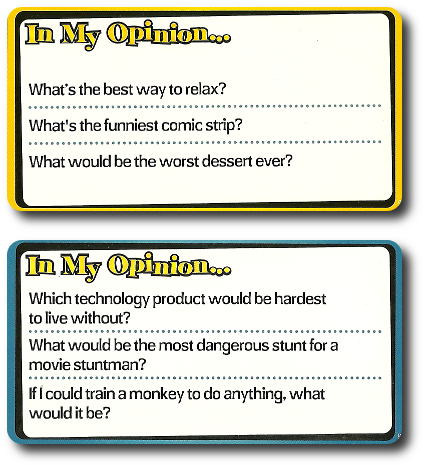 Example of a Question card (double-sided)

Once all the guesses have been placed, the Judge reveals their selection on the SELECT-O-MATIC 6000. Points are now awarded accordingly and recorded by the Score Keeper.

Note: The maximum number of points any player (including the Judge) can earn per turn is 3 points.

This concludes the game turn. Players take back their Player markers and Answer board, erasing what they wrote. The Question card is discarded and the SELECT-O-MATIC 6000 is passed to the next player in turn order sequence who becomes the next Judge.

The game continues until every player has had an opportunity to be the Judge twice. Once the last player finishes their second turn at being a Judge, the game ends and the Score Keeper adds up all the points. The player with the most points wins the game.

To learn more about Say Anything Family Edition, visit the game’s web page.

Say Anything Family Edition is the same game as Say Anything, which we have already played and reviewed. The only differences are the questions, which are “family friendly”, and the component count. The new questions and focus on the “family” would suggest that Say Anything is more of an “adult” Party game, which it is. Some of the questions in Say Anything contain subject matter that only an older player would appreciate or relate to. These types of questions have been removed and replaced in the family edition of the game with question that are more appealing to a broader (and younger) audience, but the game play remains the same.

As such, I predict we’ll see the same level of endorsement from all our groups. Which is to say, the game will be approved by the Child Geeks and the Parent Geeks, but rejected by the Gamer Geeks.

Since we have played the standard edition of the game before, and there is nothing different between the two editions game play wise, I’m going to go about the review a bit differently. Instead of suggesting to players that we are playing a new game, I’m just going to bring Say Anything Family Edition to the table and play it like it’s the standard edition. This should allow me to observe any noticeable differences in the family edition without influencing opinions.

Or lack thereof for the Gamer Geeks…

The Gamer Geeks found nothing new to enjoy and the game play didn’t persuade them to believe that Say Anything Family Edition was a game worthy of their elitist time or precious gaming table space. 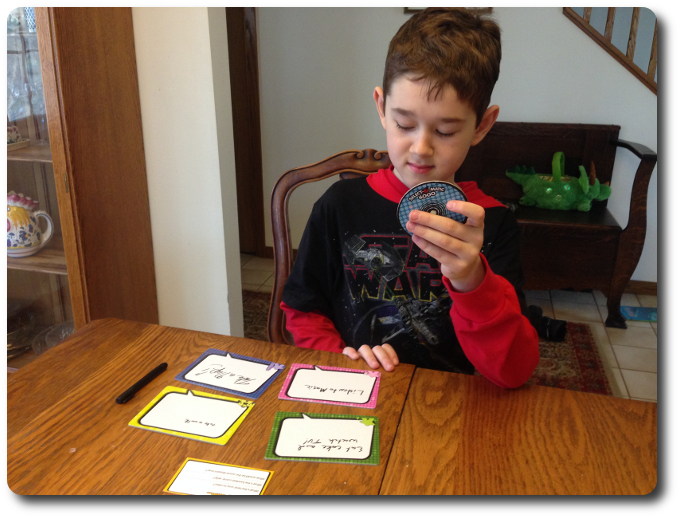 My oldest reads the answers, smirking, as he determines which he likes best

In the end, the Gamer Geeks rejected the game, but the Parent Geeks and Child Geeks still thought it was a great time. Which then begs the question, does this edition of the game deserve a spot on your game shelf if you already own the standard edition?

I would suggest it does not.

The standard edition of the game only has a handful of questions that I would consider somewhat questionable and these can be easily removed without upsetting the game play. Additionally, the differences between the two games are so minor as to hardly register. Having both editions of the game seems like overkill to me.

But if you don’t have either edition and you are wondering which to purchase, I would strongly suggest that the family edition is the right call unless you are looking for a party game. The component quality is excellent, tight rules, and none of the Question cards need to be pulled out prior to playing the game with Child Geeks. This makes the family edition much more accessible, and as such, playable.

One Response to Say Anything Family Edition Game Review