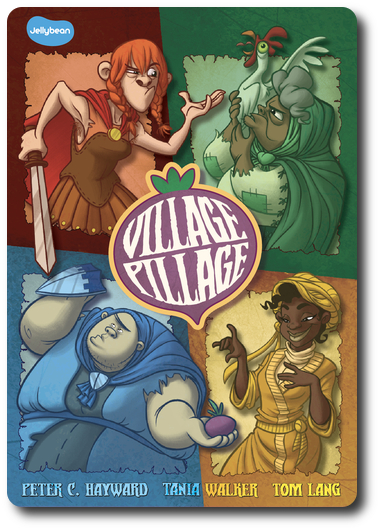 There was a time when you looked out your window and were content to see the small cottages and your fellow villagers passing by. But that time has come and gone. Now you dream of your village being the center of trade, commerce, and a military power. Very ambitions, indeed. A feat that might very well be possible – easy even – if it weren’t for the other nearby villages who had the same idea.

Village Pillage, designed by Peter C. Hayward, Tom Lang, and to be published by Jellybean Games, will reportedly be comprised of 20 Starting cards, 20 Market cards, 6 Vault cards (double-sided), 72 Turnip tokens, and 18 Relic tokens. As this is a review of a prepublished game, I cannot comment on the game component quality. Artist Tania Walker has provided her talents to the game by illustrating cards with cartoonish characters that represent the many different villagers the players are forced to work with in hopes of obtaining their kingdom.

To set up the game, first have each player take one of each Starting card. These cards are noted with an asterisk and represent the village’s starting “Farmer”, “Wall”, “Army”, and “Traders”. This is the player’s starting hand. 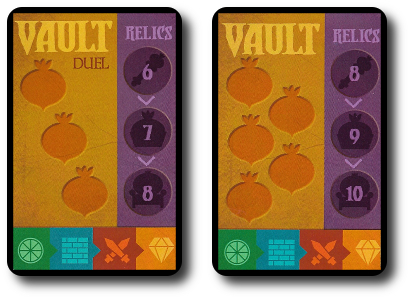 Third, place all of the Relic and all remaining Turnip tokens into their own piles and off to one side of the game playing area. This is the “Supply”.

Fifth, place any unused Vault and Starting cards back in the game box.

This completes game set up. Time to see which village is truly the best.

Village Pillage is played rounds with no set number of rounds per game. Each round has several phases, which are summarized here.

It’s highly encouraged that all players, especially during this phase, negotiate with their neighbors. Of course, players are welcome to lie and to also trash-talk, if they think it’ll help. All discussions are out of the open and any agreements made are non-binding (i.e. you don’t have to follow through on what you promise).

All players simultaneously reveal the cards they have placed, flipping them face-up. The card type will determine the order in which the cards are resolved. The order is as follows:

Cards have effects and the effect they have on the game depends on what card the player’s neighbor played. For example, if an Army card is played against a neighbor’s Farmer or Trader, four Turnip tokens are stolen from that neighbor.

This is, arguable, the most difficult part of the game. Let me break it down for you… 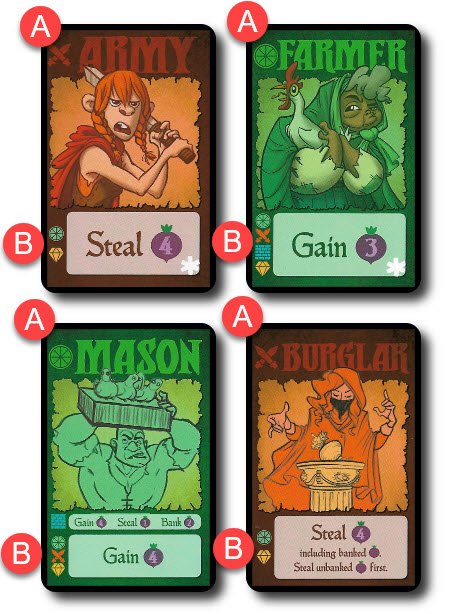 A) The cards type and title. Villages are more than just a collection of Farmers, Armies, Walls, and Traders. They also include specialists, like the Mason (a specialized Farmer) and the Burglar (a specialized Army).
B) The neighbor card type this card targets. If a neighbor’s card type is not listed, then the card has no effect.

Card effects are resolved in the following order. That is to say, a card with the “Gain” effect is triggered before the “Steal” effect. Cards with the same effect are resolved simultaneously.

One Village to Rule Them All

The game continues until one player collects three Relics. This player is the winner and now rules over the other villages.  If two or more players earn their third Relic at the same time, then the player with the most Turnip tokens wins.

Village Pillage is best played with three or more players, in my opinion, but you can play a good game with just one opponent. The “Duel” side of the Vault card is used, which changes the number of Turnips a player can bank and the price of the Relics. Placement of cards is a bit different. Players place two cards. One for “now” and one for “later”. In this way, players are continually playing cards for the future…or what they hope to be the future.

To learn more about Village Pillage, visit the game’s web page or visit the Kickstarter campaign.

The Child Geeks really enjoyed themselves with Village Pillage. According to one Child Geek, “What I like most about this game is the many characters you can recruit to help you become a kingdom!” Unlike other deck-building games, where the player has to draw the card they just earned at random later in the game, Village Pillage allows the player to use the card on their very next turn. This was not lost on the Child Geeks and they enjoyed the ability to constantly change their hand and use their new cards right away. As one Child Geek put it, “Nothing is worse than getting a card you want, but it never comes to you when you need it. You always have the cards you want in this game.” After many villages were burned to the ground or elevated to kingdom status, all the Child Geeks agreed that Village Pillage was a game they thoroughly enjoyed.

The Parent Geeks also liked the game, finding it to be a perfect mix of thoughtful and casual game play. According to one Parent Geek, “Games that provide fun sometimes take too long or have too many rules. This game has just the right number of rules and stays on the table just long enough to make me feel happy.” From casual and inexperienced Parent Geek gamers to experienced gaming enthusiast, Village Pillage seemed to hit all the major areas of concern: game play length, engagement, and replay. As one Parent Geek put it, “I’m sick to death with deck-building games. This game feels fresh and now has me interested in playing other deck-building games again.” When all the games were over, the Parent Geeks took a vote and approved Village Pillage for all.

The Gamer Geeks disagreed with the Parent and Child Geeks, but not fully. They enjoyed the game’s speed and how the cards were used, but stopped liking the game as much as their counter parts when it became apparent that more cards did not a better game make. According to one Gamer Geek, “When you get right down to it, you are always guessing what your opponents might or might not have and it makes no sense to play defensively. You just need to collect as many cards as possible, but all that really does is give you more choices. It doesn’t give you a big advantage.” Which I would argue is a good thing, as you don’t want one player to get a card that kills the fun. Still, the Gamer Geeks felt that the game was a bit to casual and a bit too random for them, despite the fact that they built their own deck. When all was said and done, the Gamer Geeks couldn’t bring themselves to reject Village Pillage, but nor could they agree it was a game worthy of gaming elitists. One Gamer Geek said it perfectly when she said, “This game is not great, not bad, and not too shabby. I’d play it again.”

Village Pillage is a fun new way to look at a deck-building game. But by “deck”, I really should say “hand”. Players collect cards that they can then use and use whenever they like. This was found by many of our casual gamers to be a lot of fun, but for those players who wanted a more difficult game, they found Village Pillage to feel a bit like riding a bike on training wheels. The good thing here is that you can still go off sweet jumps with a bike on such wheels, just not elegantly.

And I think that is also one of the things I didn’t care about the game, as well. It feels a bit too easy. Too forgiving. Too accommodating. And, yes, none of those things are bad. For me and other Gamer Geeks, what we wanted with Village Pillage was more bloodthirsty game play, deeper decisions, and more painful consequences. None to be found here. Village Pillage doesn’t want you to play nice, but nor does it want you to play too rough. It’s a rather neighborly and good-natured battle that plays well, but never feels like a real battle.

Despite its lack of depth, it’s full of light strategy and tactics. Players have few choices in the game when they start, but if they build their hand correctly, they’ll end up having more choices than they know what to do with. Which makes some of the early cards worthless. And without a way to dump those cards, players are stuck holding them. One begins to feel there is waste here and that the game is cheating itself. Luckily, by the time you start to feel that the weight of your cards is not worth the value they add to the game, the competition is over and you’ll wonder how on earth you lost. And that, my friends, is the real joy here. Victory looks really easy, but you won’t find it to be an easy task to complete.

Do try Village Pillage when time permits. What it lacks in depth it makes up for in gimmicky game play. Expect a good time.