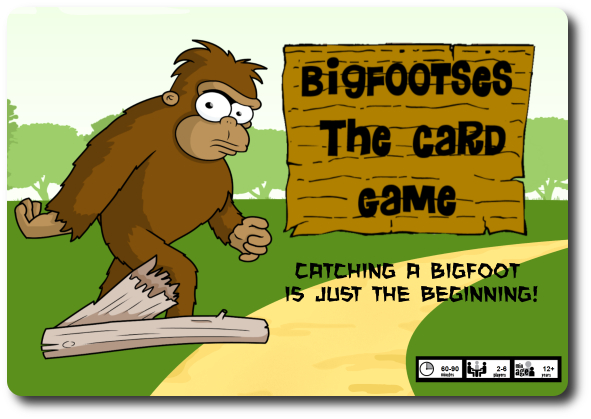 The legend of Bigfoot is an old one. From all over the world, you can find stories of people wandering into a large manlike creature with hair and a penchant for disappearing quickly without a trace. There are some who have dedicated their life to finding this elusive creature. Whether it’s for fame, fortune, or simply curiosity, you now join the hunt for Bigfoot!

Bigfootses, designed by Wilbur Massie and published by Bigfoot Games, is comprised of 5 standard six-sided dice, 10 Profession cards, 75 Woods cards,  75 Thingies cards, and 6 Player Aid cards. The cards are as thick and as durable as your standard playing card. Illustrations by artist Jamie Sale are very cartoonish and humorous.

To set up the game, first shuffle the Profession, Thingies and Woods cards into different piles. Place each pile of cards face-down to create three different draw decks. Place these draw decks in the middle of the playing area. Leave room for discard piles.

Second, have each player draw 1 Profession card from the Profession draw deck. Players should keep these cards secret.

Third, each player should draw 5 Thingies cards from the Thingies draw deck. These are the player’s starting equipment and provisions to assist them in their bigfoot hunt!

Fourth, have each player take a single six-sided die.

Bigfootses is played in turns. On a player’s turn, they can take one of five different actions. Each possible action is summarized here.

This action option allows the player to explore the woods where the bigfoots can be (possibly) found. The player draws 1 Wood card from the Wood draw deck and places it face-up in front of them. What the player finds determines what they do next.

If the drawn card is a bigfoot, the player may attempt to capture it. The goal of the game is to collect as many bigfoots as possible. Once you find them, a player attempts to capture them by rolling the six-sided die that will result in a number value higher than or equal to the Bigfoot “elusiveness score” (players always lose if they roll a “1”). The player gains a +1 bonus to their roll for every Bigfoot they have previously captured. Equipment and Items can also add a bonus. If the player captures the bigfoot, it’s kept face-up in front of them in a spot referred to as the player’s “corral” (bigfoots in the corral will add bonuses to subsequent capture attempts). The player’s total victory points also increase. 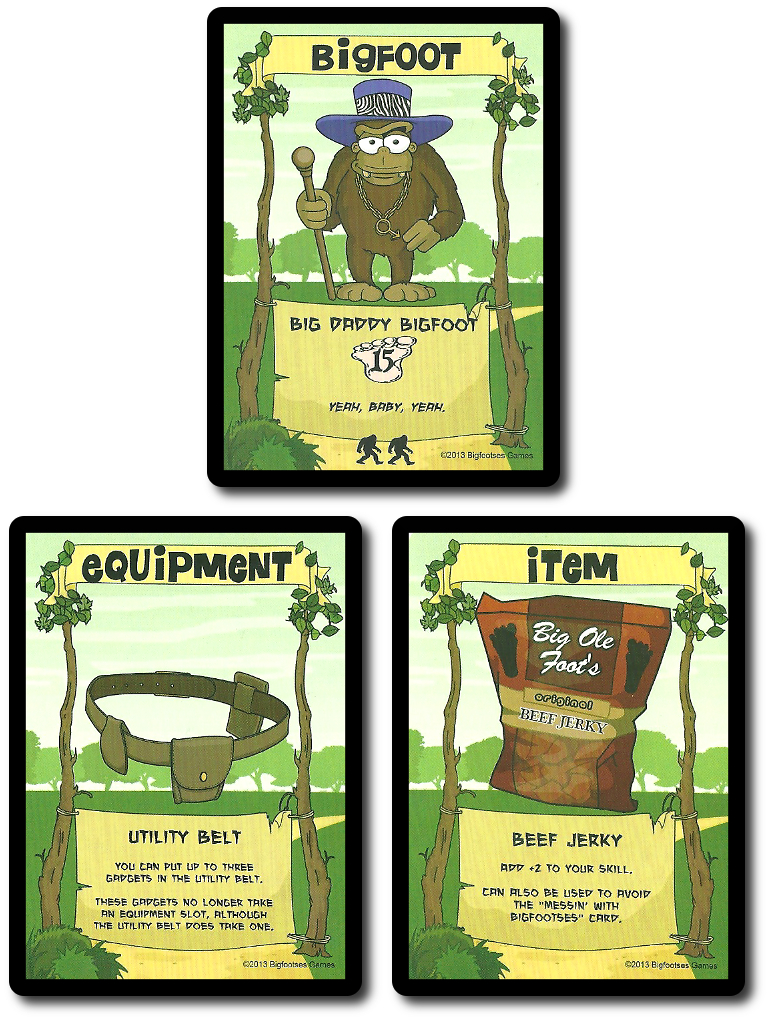 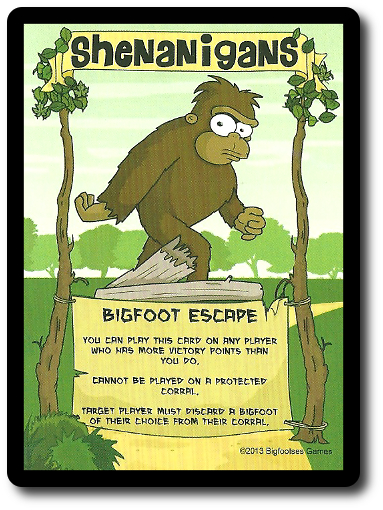 If the drawn card results in a battle, the card is resolved in the same way as attempting to capture a bigfoot, but no bigfoot is captured. In fact, any previously captured bigfoots provide zero bonus to combat. All the player can do is use their equipment and hope for the best. They win the battle if they roll a die value with modifiers that are higher than or equal to the target value to beat. If the player loses, they also lose a piece of equipment. If they win, they obtain new cards. 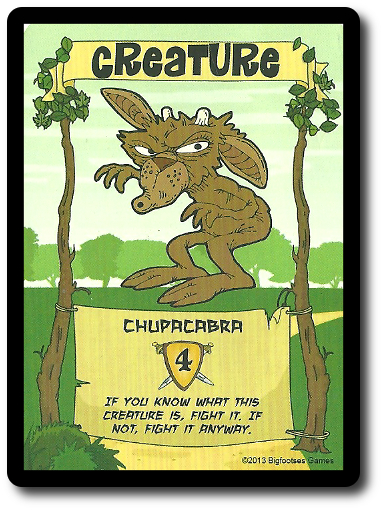 If the drawn card results in a creature that is one part bigfoot and one part “normal animal”, the player attempts to capture it. If they do, they place the defeated bigfoot in their corral and possibly collect more cards. If they lose, they also lose equipment. 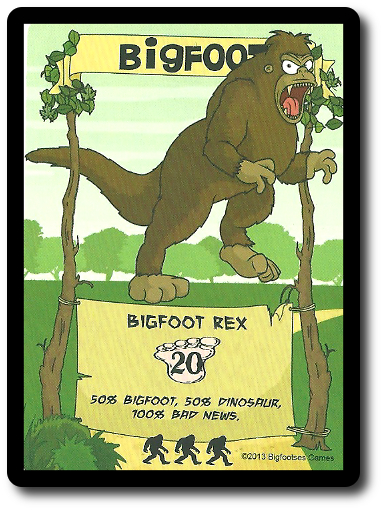 If the drawn card results in a witch (yes, witches live in the woods), the “Witch” Woods card is placed face-up and apart from the draw decks. The effects of the witch are now in play until such time another “Witch” Woods card is drawn and replaces it. Only one witch can be in play at a time. 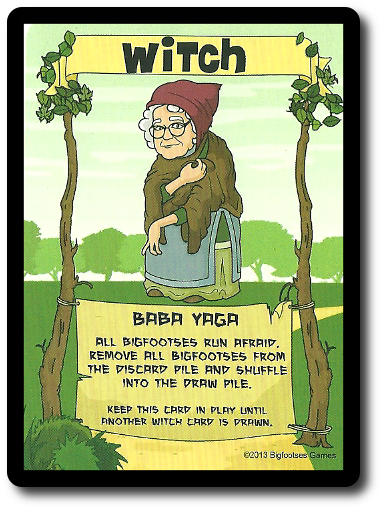 In the event that the Woods draw deck is depleted, all the discarded bigfoots are collected and placed face-up. For the duration of the game, a player can elect to attempt to capture any of the face-up bigfoots they like.

Action Option 2: Go to Work (Make Use of Your Training)

This action option allows the player to use their Profession card’s special ability. Unless otherwise stated, the player’s Professional ability can only be used once per turn and only if the player has seven or more victory points. 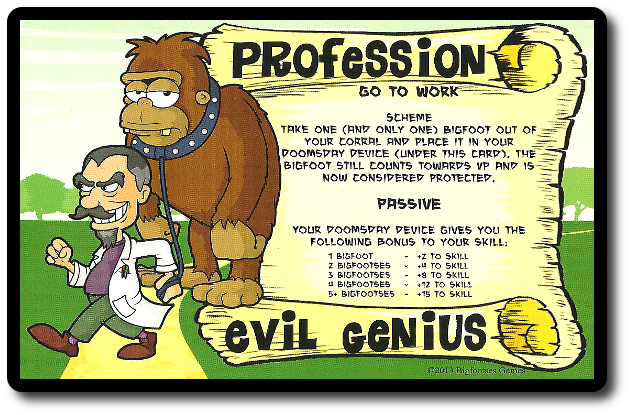 This action option allows the player to discard as many Thingies cards from their hand as they like and then draw the same number back to their hand.

A player can play one “Equipment” Thingies card from their hand for free during their turn, before, or after their selected action. A player can never have any more than three pieces of equipment in play at a time by default (other cards change the possible total). When a player is at their maximum equipment carrying capacity, they must discard an equipment card currently in play before they bring out a new one.

Equipment is either a weapon or a gadget. A weapon aids in combat, but only one weapon type can be in play at a time. Gadgets and items will assist the player in other ways as described on the card.

This ends the player’s turn. The next player in turn order sequence now takes their turn by selecting one of any of the available actions noted above.

To learn more about Bigfootses, see the game’s website.

The Child Geeks enjoyed themselves, finding the game’s theme to be entertaining and the illustrations to be amusing. However, they did not like how long the game took. According to one Child Geek, “The game is funny, but it takes way too long to play.” Clocking in around 60 to 90 minutes (according to the game box) to complete, Bigfootses had a hard time keeping the Child Geeks engaged for the duration of the game play. As a result, our younger players lost interest and wanted to play something else. As one Child Geek put it, “Fun game, but if you want to finish it, you have to play with older kids or adults.” That being said, none of the Child Geeks had anything to really complain about. They found the game easy to play and fun. That wasn’t enough to give the game a ringing endorsement, resulting in a mixed level of approval from the Child Geeks.

The Parent Geeks were strikingly similar in their review comments. Again, all the players found the game easy to learn, fun to play, and amusing. Like the Child Geeks, the Parent Geeks commented again and again how surprised they were that the game took so long to finish. According to one Parent Geek, “This game plays light but feels kind of heavy after you’ve been playing it for over a half-hour and still a long way off from the finish line.” Towards the end of the games, all the players were getting pretty tired of the cards that allowed opponents to interrupt attempts to capture bigfoots. As one Parent Geek put it, “I just one to capture these damn things and finish the game, you know?” Like the Child Geeks, the Parent Geeks gave Bigfootses a mixed review, finding it to be a game they enjoyed for the most part, but its game length kept the game on the table longer than many liked.

The Gamer Geeks were not impressed with Bigfootses. According to one Gamer Geek, “I’m not finding a lot in this game that I find challenging or overly interesting. I have found a lot of humor, which is a good thing, but the game play is all about tripping each other up which makes for a very long and unenjoyable experience.” Another Gamer Geek said, “This is the kind of game I would play as a teenager or with my parents. I wouldn’t play a game like this unless I was at a convention, it was very late, I didn’t want to go to bed yet, and there was nothing else to do.” But it wasn’t all bad. The Gamer Geeks liked the variety of cards and even commented a few times how some of the jokes in the game were “subtle, yet brilliant”. When all the bigfoots were captured, the Gamer Geeks decided to reject Bigfootses, finding it to be a game that wasn’t for them.

I agree that Bigfootses overstays its welcome. The game starts off strong but never continues to escalate. It is, essentially, the same level of energy throughout. Things get easier as the game progresses, but if you are playing with a highly competitive group of players, it will take you longer than expected to reach your goal. When you play Bigfootses, an average game could take up to an hour if not a bit more. That feels way too long for a game this light.

Overall I am not pleased or displeased with the game. When I play it with older kids and their parents, the game is a big hit. Based on my observations and feedback, the game does significantly less well when you don’t mix the playing group. I personally found this odd. I have not been able to find anything to suggest why this is other than unmixed groups all have their favorites and Bigfootses simply isn’t one of them. It’s a game that entertains to a point, but to what extent depends on the age ranges in the playing groups. I don’t know what that says about the game, but it does tell me a great deal about the players who sat down and played the game with me. I suggest you give the game a try yourself. With the number of mixed reviews we received, the best way to tell if the game is right for you is to go chasing after those bigfoots with your playing group. As for me, I won’t be joining the hunt.