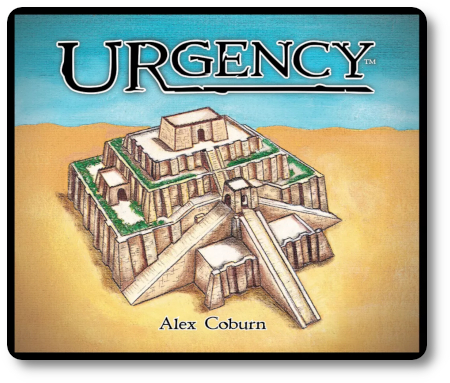 It turns out there were geeks in the most ancient of times. Case in point, a board game was unearthed during an excavation at the ruins of the ancient city of Ur that dated back to 2600 BCE. Through several other discoveries, the complete board game was found, including the rules and the pieces. This is great, but this ancient game needed a modern spin. Enter Urgency that takes an ancient way of playing a game and gives it a fresh new take that will leave you feeling renewed, despite playing a ridiculously old game.

Urgency, developed and self-published by Alex Coburn, is comprised of one gameboard, 14 tokens (seven black, seven white), one cloth bag, eight custom four-sided dice (four black, four white), 49 Rule cards, and five Reference cards. The quality of the game is excellent, with a thick cardboard gameboard, a nice cloth bag to hold the wooden tokens and plastic dice, and a card box to hold the Reference and Rules cards. Illustrations are minimal but thematic, furthering the game’s narrative.

Stepping Back Into Time

To set up the game, first place the gameboard in the middle of the two players, having the opponents sit across from each other.

Second, have each player take seven tokens and four dice of the same color and reference cards if needed.

Third, and this is the most time-intensive portion of the game setup, have the players first determine what they want their game difficulty to be. There are three levels: “Normal,” “Hard,” and “Expert.” The difficulty measurement here is based on the complexity of the rules and how they are used in the game. The harder the rules, the more complex and involved the player’s game will be.

Fourth, depending on the difficulty, two “Animals” will be identified. These are the proper pairing for both players, ensuring neither has any advantage over the other, but the special abilities of each player pair well, allowing each player to be very strategic and tactical in their approach to the game. Have each player select the Animal that most intrigues them. 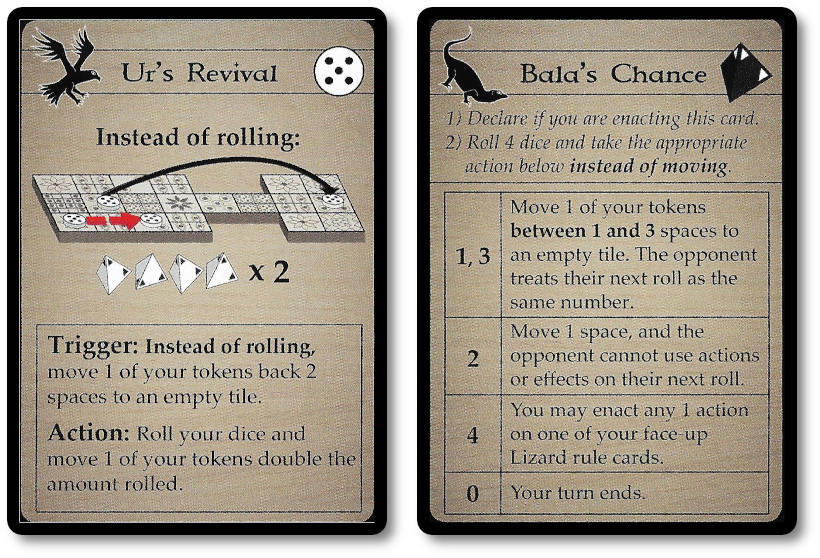 It’s important to note that the game, by default, is balanced. However, game variants allow the player to customize their decks, and there is nothing stopping players from selecting different animal combinations. For your first game, it’s recommended that the “Bull” and “Ibex” be used.

Fifth, each player shuffles their Animal cards and discards one, face-down, to create their discard pile. Players then take the remaining cards and make three stacks of two cards each, face-down, in a row. 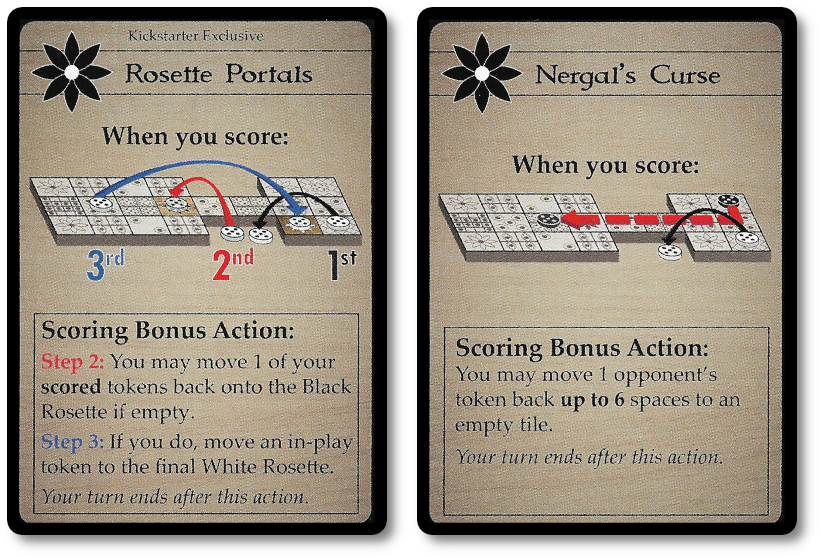 Which would you choose?

Urgency is played in turns with no set number of turns per game. Each player has a starting rule that they must follow during the game and a specific Animal Rule card sets that they will be able to use during the game, but not all at once. As the game progresses, the player will be given new rules and abilities to use during their turn when their opponent scores. All Rule cards, once played, are “active” for the duration of the game, but never before they are revealed and placed face-up. New Rule cards always overrule the “Basic Rules,” which are summarized here.

On a player’s turn, they will complete the following steps by default. As the game progresses, new rules in play will change how the player resolves their turn and what additional actions they can take:

Depending on where the player ends their movement with their token, the movement itself might require the player to resolve an additional outcome as a result.

This ends the player’s turn, and the next player takes their turn, starting with step one noted above or as their current Rule cards in play dictate.

Scoring and Changing the Game

When a player brings their token to the end of the “Home Row” and has enough movement to move the token exactly one space “of” the row, the token is considered “scored.” The token is set aside and now helps the players keep track of scores. After the player scores, the following actions are taken:

When a player’s opponent scores their fourth token, the player looks through all their Rule cards in their discard pile and selects one to put in play. All remaining Rule cards are placed back in the game box. In this way,  the game will change each time the opponent scores but only four times.

The game continues as summarized above until a player scores six tokens. This player is the winner of the game!

No game variants are provided with the rules. However, several different ways to play the game are available to you from the publisher’s website. Our favorite variant allows players to draft their decks. In fact, you can view pre-built decks if you want to take your game to interesting new levels of awesome.

To learn more about Urgency, visit the game’s web page.

The Child Geeks loved the game, finding the different decks not too difficult to understand, but each was different enough to give them pause. According to one Child Geek, “What I like most about this game is that you can take the deck that makes the most sense to you. You can also make a deck that doesn’t and challenge yourself.” Another Child Geek said, “I liked the game a lot. The pictures on the cards make it easy to understand how I play them, and each game is different. I beat my brother three times!” When the last animal was put back in its cage and all the game components back in the game box, the Child Geeks voted and gave Urgency their full approval.

The Parent Geeks were also thrilled with the game, finding it fast to play, easy to learn, and engaging from the first roll to the last. According to one Parent Geek, “I very much enjoyed this two-player game. A lot of replayability and opportunity to explore new ways to crush your opponent – or be crushed. I had a hard time passing this game on to the next group to play; I loved it so much.” Another Parent Geek said, “Yes. Excellent. Really, really excellent. Lots of fun with my husband and lots of fun with the kids. Perfect two-player game with so much possibility that it kept me coming back for more. Challenging and creative. Pure delight!” When the final token came to land and score, the Parent Geeks gave Urgency all the points.

The Gamer Geeks were just as delighted as the Parent Geeks but in a much more geeky way. According to one Gamer Geek, “This reminds me of the earliest days of Magic: The Gathering when the game still made sense and anyone could learn how to play. Easy rules to follow, and each card subtly changed how you went about playing. I had a great time and would highly recommend this to all my friends.” Another Gamer Geek said, “Now this is what a two-player game should be about. Fast to deploy and a real joy to engage with. I cannot believe I’ve never heard about this game until now. I”m going to get myself a copy and bring it with me to every convention when we can start doing that again.” Without hesitation, the Gamer Geeks gave Urgency their full approval and urgently asked for the game back so they could play it again.

I’ll be honest with you, dear reader, I get many games from a lot of very creative folks. Too many for me to keep without investing – heavily – in a warehouse to keep them all. I’m careful about what I keep, using the “one in, one out” rule to help maintain my board game collection well within the realm of sanity. This isn’t easy because there are so many wonderful games to play repeatedly and again. With Urgency, I didn’t even hesitate to keep it (I won’t bore you with what game got the chopping block and found a new home). I enjoyed it from the very start and was yearning for its return so I could play it again after I sent it out to our groups to play and review.

Each game I have ever played – EVER – PLAYED – is always different. Each Animal has a unique way of approaching the game, and each game gives the player a unique way of choosing how to do so. You, in fact, tailored your game experience to how the game is going, creating awesome combos and neat hat tricks. And that is pure awesome. I have never played a game that allows me to radically shift my strategy and tactics in a meaningful and highly entertaining way. Yes, I’ve played many games where there are so many strategic approaches and tactical actions to make your head spin, but Urgency doesn’t overwhelm its players with all the possibilities. Instead, it offers players a choice. A powerful choice. Either or. And within that choice comes so many possibilities. One of which is always a more engaging game with even more ideas to explore.

Do try Urgency the very first chance you get. When you do, try it more than once. Explore those animals and learn how each approaches the game with a unique pair of eyes that will change how you view the road to victory.

One Response to Urgency Game Review