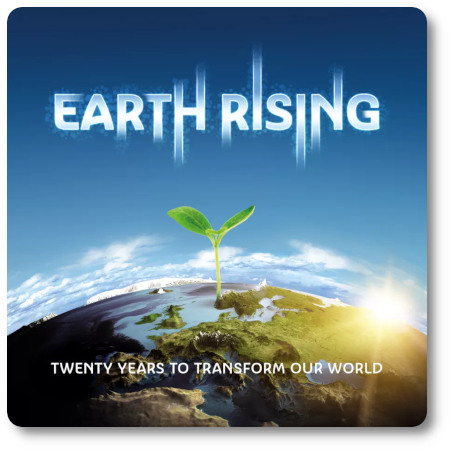 American author, philosopher, naturalist, scientist, ecologist, forester, conservationist, and environmentalist Aldo Leopold said: “Conservation is a state of harmony between men and land.” In this game, humankind and our planet are out of balance. Poverty and unsustainable practices are causing our resources to diminish, humanity to hurt, and our planet to wither. But all is not lost. Take on the role of an ecological hero and help humanity rise to save our Earth. Just know you cannot do it yourself. This is a team effort that will take everyone to succeed!

Earth Rising: 20 Years to Transform Our World, designed by Laurie Blake and to be published by Stop, Drop and Roll Games, will reportedly be comprised of one round game board, six Major Burden board segments, six Minor Burden board segments, 2o Calendar cards, 42 Meeples, 42 double-sided Practice counters, six Ecological Collapse tokens, three Rising Temperature tokens, six Character cards, 42 Influence cards, 84 Strain tokens, and six Status Quo Strikes! cards. As this is a review of a prepublished game, I cannot comment on the final game component quality. However, the prototype of the game we were provided for this review was comprised of high-quality production-level components.

To set up the game, first place the round game board in the middle of the playing area and within easy reach of all the players. The game board represents the Earth.

Sixth, give the Ability tokens to the relevant Characters in play and set aside any not currently in use. Place the Rising Temperatures and Eco Collapse tokens off to one side and into separate pools for later use in the game.

Eighth, place four Meeples per sector, resulting in two Meeples being on top of the previous two placed Practiced counters and two empty spaces. Place the remaining Meeples in the center of the game board in rows of three Meeples each.

Earth Rising is played in turns and rounds. A player’s turn is summarized here.

Step One: Draw and Discard 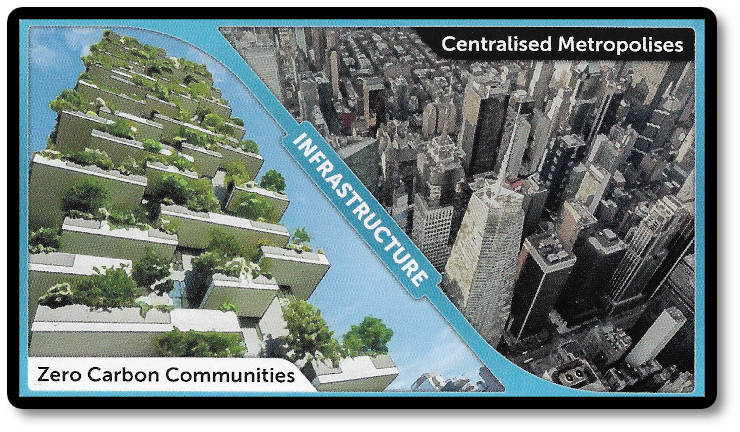 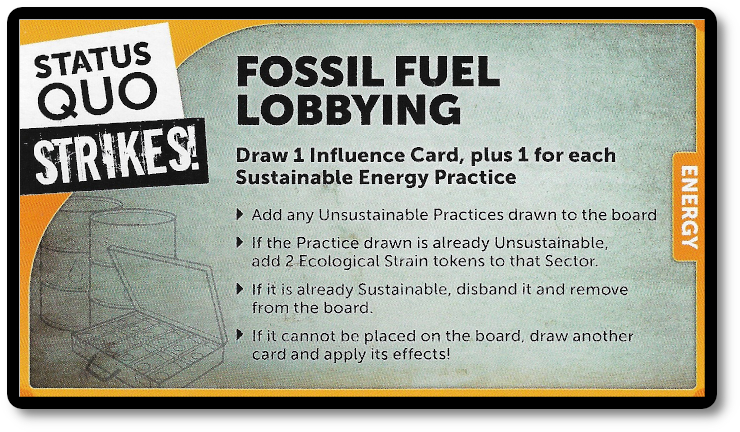 After the player draws cards, they then must discard, but only if they have six or more cards in their hand. The player discards the cards of their choice, face-down, until their hand has five or fewer cards.

Each player has up to four actions on their turn. These actions can be completed in any order and can be repeated as long as the total number of actions taken does not exceed four. Available actions are as follows: 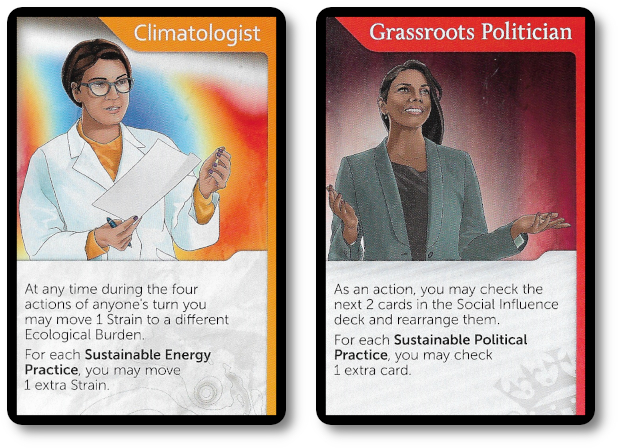 If the total number of Burdens of each type reaches a total of 15 strain at any time, an Ecological Collapse occurs and is immediately resolved. Strain from the Burdens that caused the collapse are removed (five from each sector), and an Influence card is drawn. An Ecological Collapse token is added to the sector that matches the Influence card drawn. This collapse remains in play for the game’s duration, and a Rising Temperatur token is placed, stopping players from using that particular space again.

If Ecological Collapse did not occur during the player’s turn, then the calendar year is advanced by one for a total of 20 years. This is done by discarding the top-most Calendar card.

If all the strain is removed from the Burden board section, the players have successfully transformed it into a sustainable practice that will benefit all. The Burden has now become an Expansion.

If an Expansion ever has more strain than it can tolerate, it will recess back to the Burden side, resulting in all Practice tokens being removed for that section. The result is players needing to manage the many different aspects of ecological practices and then sustain those that are positive. Failure to do so will result in all losing the progress made, referred to as a Recession.

At the End of Twenty Years

The game ends if the players flip all the segments into the center of the game board, which has created a truly sustainable world for all. Humanity is saved, and so is the planet!

However, if the last Calendar card is flipped and the round completed without all the sectors in the center, the players have run out of time. Humanity will continue to slip into poverty, and the Earth will become a place that cannot sustain the human race. All the players have lost.

To learn more about Earth Rising: Twenty Years to Transform Our World, visit the game’s website or visit the Kickstarter campaign.

The Child Geeks had a great time playing the game, finding it engaging and a great way to talk about their own concerns about our planet and how they are taking steps to be good stewards of our world. According to one Child Geek, “I liked the game, and I think it taught us valuable lessons. I didn’t really understand what sustaining was until we played for it in the game. I think we can all do it if we try.” Another Child Geek said, “We kept losing, which felt really bad and made me think of all the things we can do around our house to help. When we finally did win, I felt pleased and hopeful!” Clearly, the younger generation is going in the right direction to help all of us create a more sustainable and healthy ecosystem. In the meantime, they all agreed that Earth Rising was a game they enjoyed!

The Parent Geeks also enjoyed the game, finding it not only to be entertaining to play but a great opportunity to share with their children the importance of “being green.” According to one Parent Geek, “As cooperative games go, it was easy to learn and fun to play. It also had a really positive message about self-empowering each individual to take ownership of our planet and our daily activities. We cannot do it alone. No one person recycling will save the world. But this game showed my kids – and me – that all it takes is one to start, and more will follow. Very positive message.” Another Parent Geek said, “A good game that didn’t come across as preachy. Very matter-of-fact, to be honest. Either do this and do well or don’t and suffer the consequences. A good message that wasn’t scary but was serious. All the while, it was a fun game to play, too.” When the last plastic bottle was recycled, all the Parent Geeks voted to approve Earth Rising.

The Gamer Geeks liked the game’s message but found the gameplay to be fairly bland. According to one Gamer Geek, “A decent enough cooperative but it never caught my attention or made me excited. We won all our games without too much trouble. I think there needs to be a way to scale the difficulty. Maybe give players less than 20 turns or start the planet off at different levels of difficulty in different sectors. Either way, I thought the game was fine. Not great. Simply OK.” Another Gamer Geek said, “The game entertained me but didn’t challenge me. I thought the message was very positive, and I’m happy to see this topic is presented in a game that teaches players to own the issue or be steamrolled by the consequences of ignoring the obvious problematic elephant in the room.” When all the votes were in, the Gamer Geeks gave Earth Rising a mixed review, finding it good enough to speak positively about but not nearly good enough to be excited.

Earth Rising does a great job of breaking down the very complex geo-political and ever-evolving ecological issues plaguing our world. Each nation suffers a different setback caused by lack of resources or too many, too much focus on output and not enough on sustaining to address growing limitations that will – I guarantee it – bite us all in the proverbial ass, hard. But not in a way that is scary or heavy-handed. This is an important point to make, as “games with a message” can sometimes come across as too heavy in its narrative to give the gameplay room to be enjoyed. Not the case here. Earth Rising is a generally enjoyable game that puts real-world issues into a context that is easy to focus on and address smaller issues. Yes, there is a lot of meaning behind what is going on in the game, but it never squashes the enjoyment of working together to resolve them.

Overall, I was very pleased with the game, finding it fun to play, a great way to talk to friends and family about how we go about our own lives, and ways to improve. When we lost games, it served as a great opportunity to reflect on what we could all do better next time, both in the game and actions to improve our own lives to help create a sustainable future for us all. Obtaining victory was also great and served to reinforce the positive actions already being taken, generating creative ways to improve. All the while, the game was just a game, but it was always clear what the “big picture” represented. Even being subtle about it, the game always clarifies: saving the world is in your hands.

Do try Earth Rising: Twenty Years to Transform Our World when time permits. I think you’ll find the game fun to play, and the conversations it generates at your gaming table are well worth discussing.